A Year of Rain sounds like the title of an introspective indie movie about overcoming depression. It also sounds like an accurate description of the weather in Vancouver. In reality, it is neither of those things. It is a new co-op focused real time strategy game from Daedelic Entertainment. And as the game just released into early access on Steam, the developers were kind enough to grant us a key to check out AYoR.

At a glance, A Year of Rain looks incredibly similar to Warcraft III. That similarity is more than skin-deep; the two play very similarly, with the same emphasis on hero units and blended RPG and RTS mechanics. If you’ve spent any amount of time in Warcraft III, your learning curve for AYoR will be virtually nonexistent.

This is not a complaint. Warcraft III remains one of the best games I’ve ever played, and I will accept clones of its formula all day long. The hybridization of strategy and role-playing mechanics is just the perfect chocolate and peanut butter combination for me. It’s all the best aspects of both genres with few if any of the downsides.

Also like Warcraft III, AYoR boasts a slower pace of combat that gives you more time to react and target abilities, in stark contrast to the breakneck pace of something like StarCraft II.

Don’t think that makes things dull, though. While you’re limited to just one hero unit at a time outside the campaign, most units have active abilities, so you’ll be casting spells and targeting skillshots at all times. It’s the perfect balance of engaging without being overly stressful. 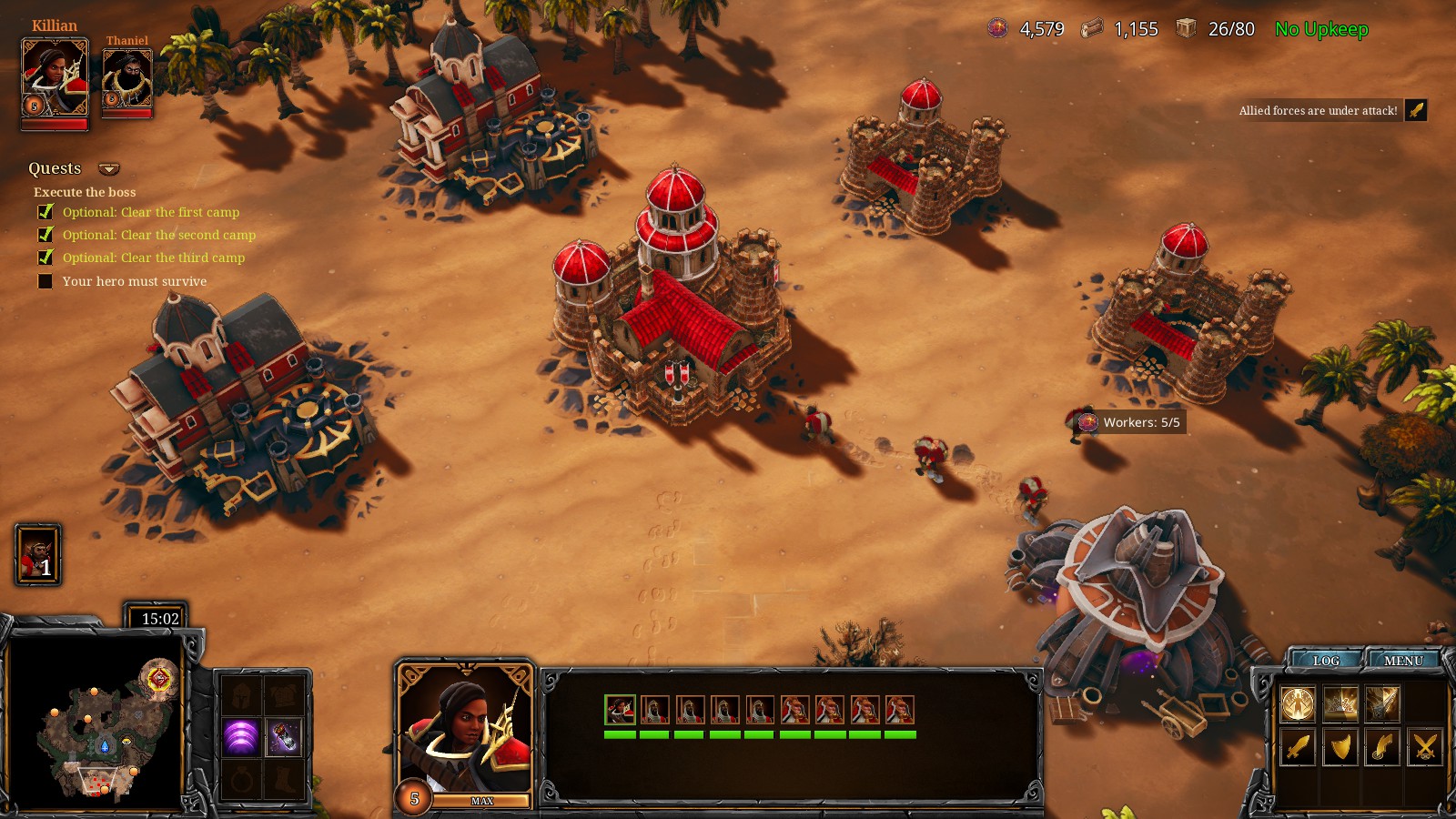 Perhaps it’s not surprising, then, that when I popped into A Year of Rain intending to blitz through the tutorial in 20 minutes and then leave it be for the night, I wound up playing for nearly two hours. I would log several more hours over the next few days — both alone and partied up with a friend — and AYoR mostly continued to impress me, even as I identified many issues.

The main thing setting A Year of Rain apart from the pack is its focus on two player co-op. Every single aspect of the game is built with teams of two in mind. Even the story campaign is intended to be played with cooperatively. In skirmish maps, team play is further encouraged by allowing players to select a role — tank, support, or damage — at the beginning of a match. This will unlock special upgrades for your army to enhance your chosen role. It’s a really cool idea, though I would like to see it developed further. Just having an extra upgrade to the HP of my knights doesn’t feel very impactful. It would be cool if it altered your tech tree a bit, akin to your choice of major god in Age of Mythology. 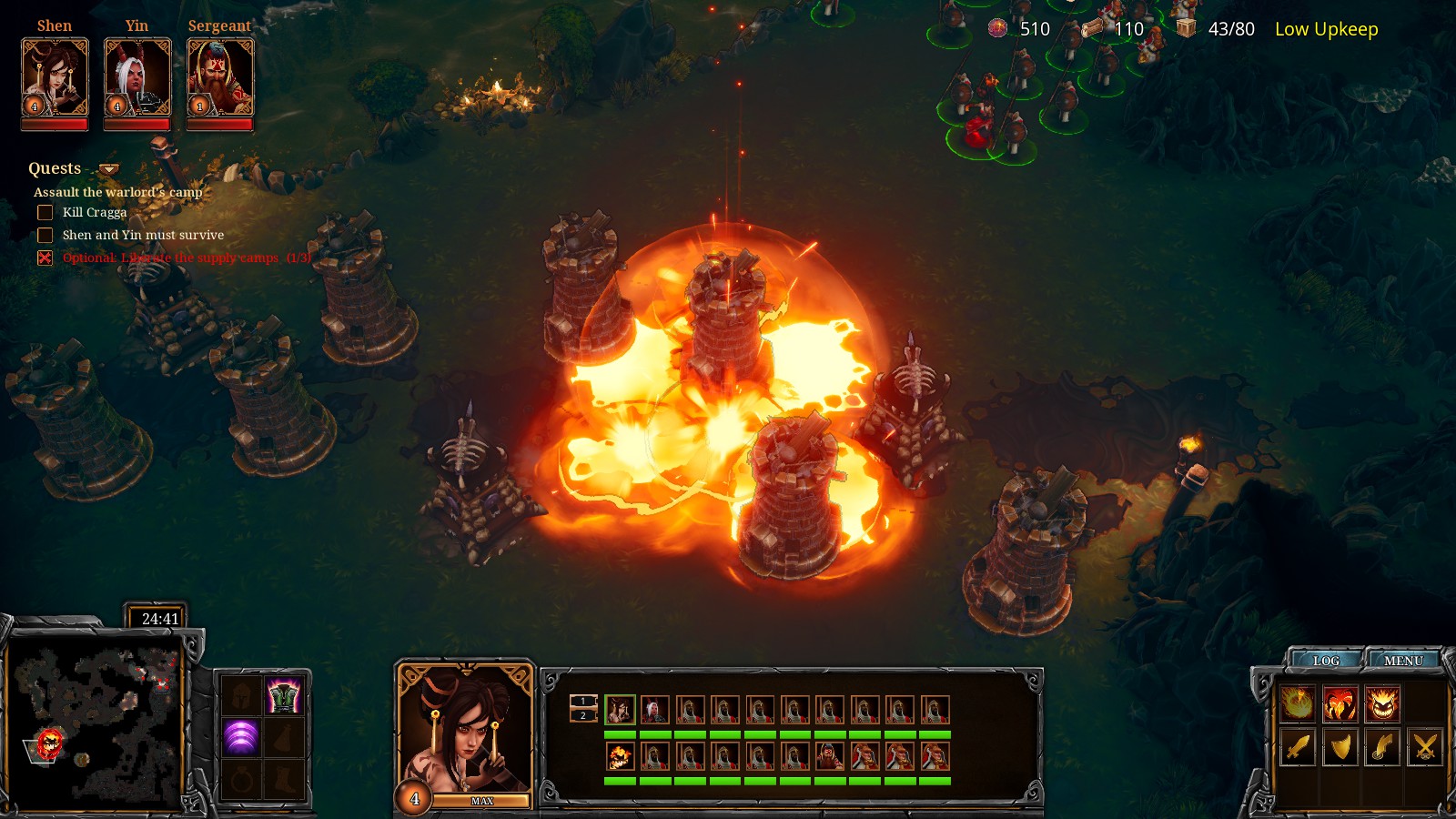 I was worried that the intense emphasis on co-op would render this game unapproachable for the solo player, but happily that does not seem to be the case. If you don’t want to play co-op or your friends aren’t online, you can still play the campaign or skirmish matches alone. Depending on the situation, you may either control all the pieces that would have been split with an ally, or you might be paired with an allied AI. The AI is rudimentary, but it gets the job done. You can give it basic instructions with map pings, which helps.

The idea here seems to be to make RTS more approachable for the casual player. Co-op splits the responsibility, and it allows more experienced players to take newbies under their wing. While I’m not sure this will be the revolution for the RTS genre the developers say they want it to be, I do think it’s a good idea that might bring in some fresh blood, and I wholeheartedly support the effort.

Another feature added to make the game more approachable for non-RTS players is a series of in-game build order guides in skirmish matches. These are based on your faction and role; if you choose to play as the Undead and pick tank as your role, you’ll be given build instructions for an army based on the mighty Minotaur Skeleton unit. As an experienced RTS player, I rather scoffed at this idea, but it may be a good teaching tool for newbies.

Something else that might help more casual players is that AYoR has eliminated some of the more chore-like elements of RTS design. You don’t need to build farms/houses to increase your population; you start out with your full population cap already unlocked. Furthermore there are no basic armor/weapon upgrades; all upgrades are about interesting things, like unlocking new abilities for your units. Even an RTS veteran like me can appreciate these quality of life improvements.

That’s a lot to praise, but it’s not all perfect. Right now A Year of Rain‘s biggest issue is that it’s simply not finished yet. It is in a very rough state, with lots of bugs and missing features. 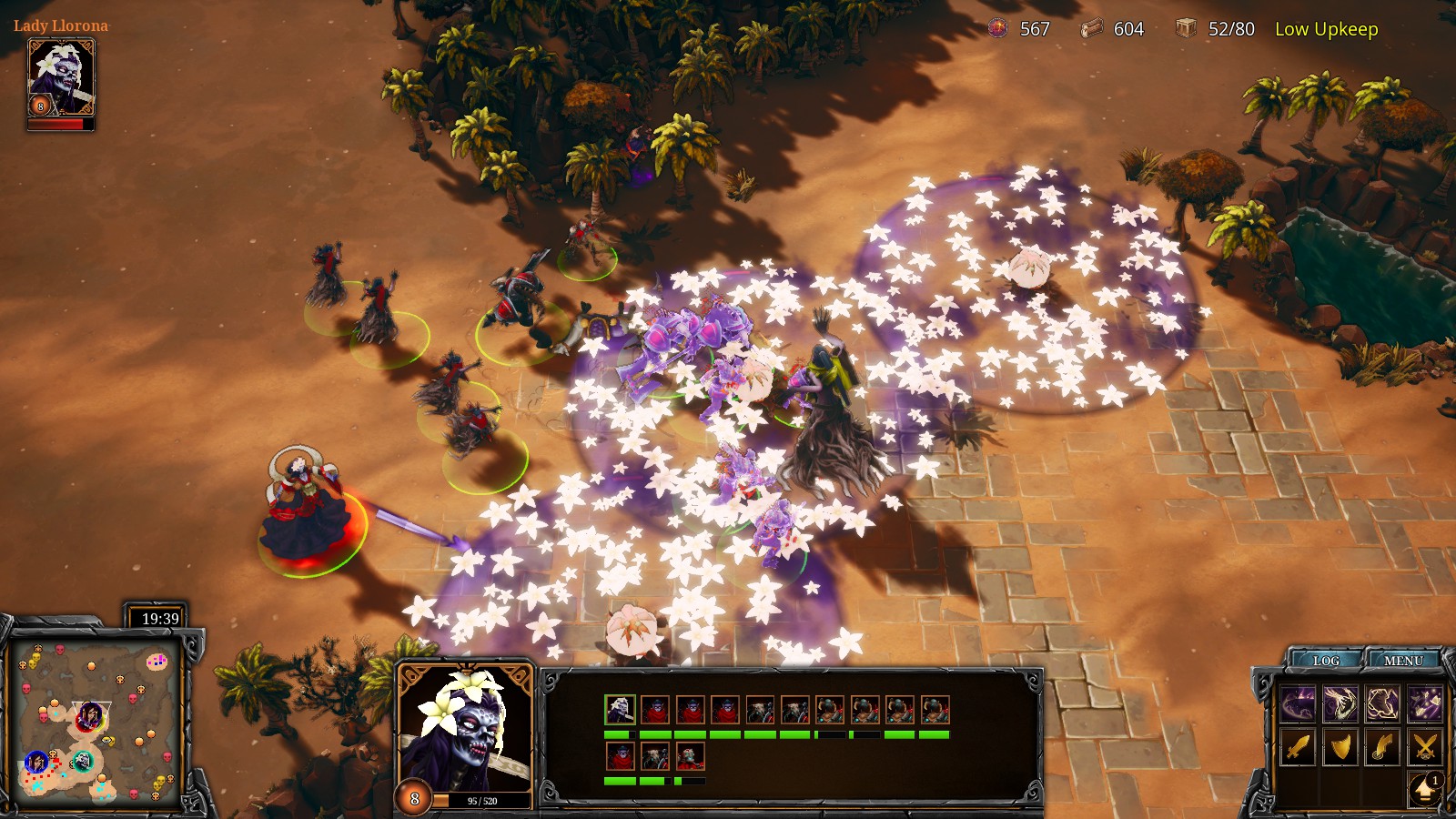 One of the biggest issues at the moment is that unit pathfinding is straight-up broken. I once had one of my workers get lost just going between the anorium mine and my town hall. You also can’t currently save your game at all. Your campaign progress is saved once you finish a mission, but you can’t save during a mission.

The good news is that fixing both of those issues is currently a top priority for the developers, but until they do get fixed, it’s pretty frustrating. And there are other issues: no choice of AI difficulty when playing skirmishes against the computer, the fact that there’s only three skirmish maps at the moment…

I’ve always been skeptical of early access as a concept, and in this case in particular I worry Daedelic may have made a mistake by releasing so early. I think a lot of people are going to try AYoR and be turned off by its current rough state. That would be a shame, because I think it has the potential to be a great game once it’s finished.

Most of the problems right now are due to a lack of polish. When it comes to actual design flaws, there are only a couple of serious ones that come to mind. One is that the writing in the campaign could be better. The characters are colorful and well-realized, but there’s a serious lack of explanation around the backstory of the setting.

There’s also an unpleasant whiff of colonialism to the whole thing. I only played the first few missions, but they mainly focused on the protagonists sailing to a new land and slaughtering the natives in the name of “bringing civilization.” It’s a little uncomfortable. Hopefully the campaign gains some nuance later on; there’s nothing wrong with games depicting colonialism as long as they’re not selling it as a positive. 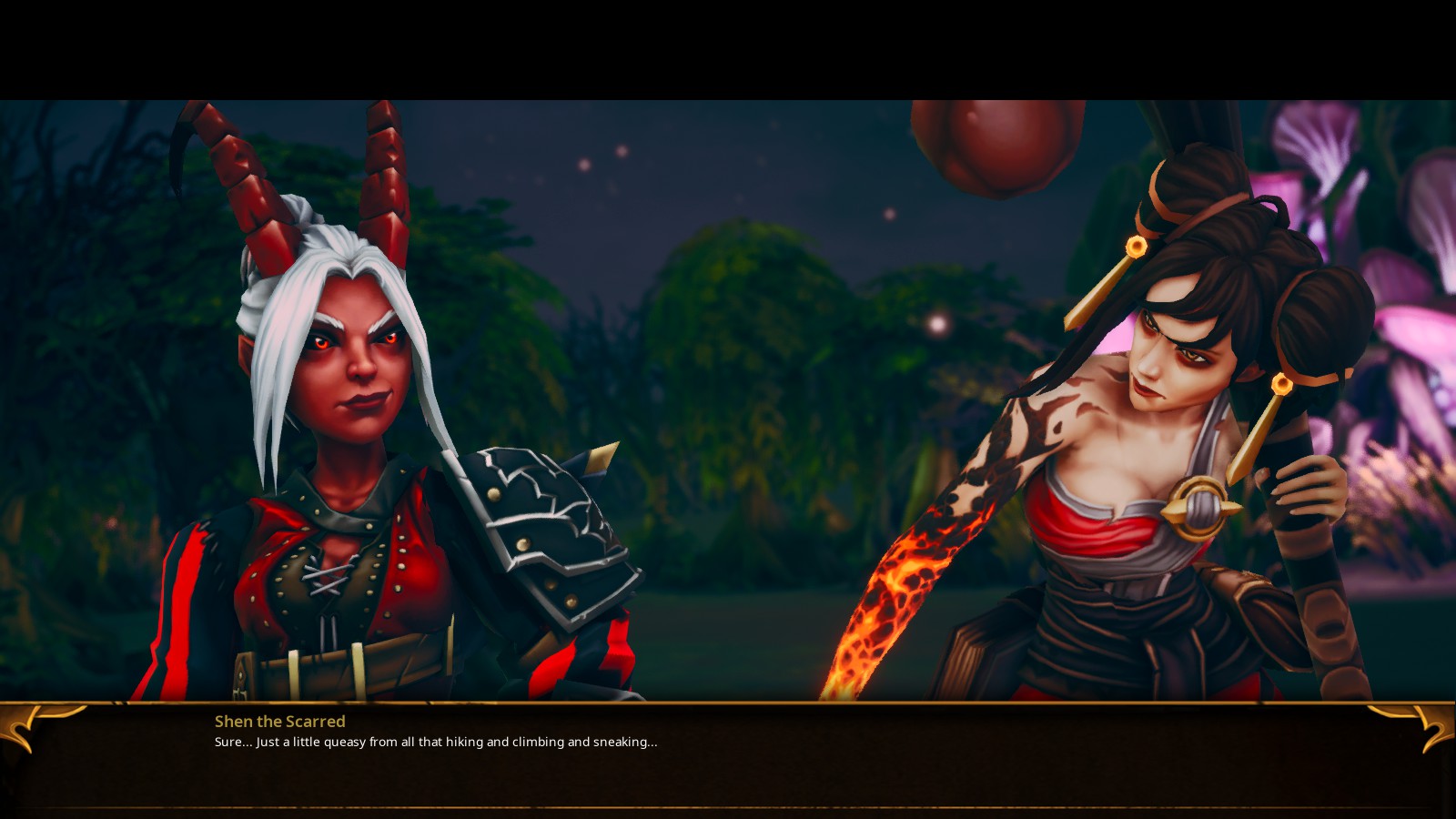 Another complaint about the core design would be that the factions aren’t as diverse as I’d like. In StarCraft II (for example), I can say that Zerg is about overwhelming the enemy with swarms of weak but cheap units, whereas Protoss is about slowly building up a death ball built around high tier units. The factions in AYoR are not identical, but they’re not different enough for me to be able to define clear identities for each in the same way.

At least they’ve got good flavor. The units have a lot of personality. I particularly enjoy the fact that the Outcast faction’s workers are giant talking pangolins with steampunk goggles. If that doesn’t sell you on this game, what will?

Finally, AYoR does boast a robust leveling system full of cosmetic rewards, but presently you can earn XP towards them only in ranked matches against other players. That seems to run counter to the casual-friendly goals of the game.

To boil it down, I think A Year of Rain needs more development time before it’s ready for anyone but dedicated testers. But most of the problems it has are due to it simply not being finished yet. Once it leaves early access, this has the potential to be a really strong entry in the RTS genre. I definitely plan to revisit it then. The only reason I’m not playing more now is that I don’t want to burn myself out before launch.