With the release date of The Elder Scrolls Online’s Greymoor chapter just a few months away, work on the update is progressing even with staff working from home. In fact, ZeniMax Online Studios made a preview available to the media this past week, and the hands-on, fully playable build included glimpses into some iconic Tamrielic locations from The Elder Scrolls V: Skyrim as well as the new Antiquities system and changes to the vampire skill line.

END_OF_DOCUMENT_TOKEN_TO_BE_REPLACED
This special edition of the Tamriel Infinium column will dive into the new landscape areas and the Antiquities system, as I’ll cover the vampire changes in-depth in another post later this week. Do note that all screenshots and videos in this post are from an early build; textures, gameplay, and stats are not final until the full launch. Let’s dig in!

Though the chapter does not release until May 18th (June 2nd for consoles), preparations for launch are starting to ramp up. Greymoor is part two of 2020’s year-long Dark Heart of Skyrim theme and encapsulates the largest content update of the year for The Elder Scrolls Online. The goal, according to creative director Rich Lambert, is for the Western Skyrim zone to feel “familiar but different” from the version later in the franchise’s lore timeline.

That’s a comforting thought for me. I fully admit that I’m smitten by Skyrim nostalgia, but at the same time, I wouldn’t want to see ESO try to re-invent a classic. And to its credit, ZeniMax seems to have succeeded in that goal.

Upon completing the new tutorial, the player is deposited just outside of the iconic Solitude. The very first thing I did in the game was to run up and down the streets looking for such familiar locations as the Bards College and the Lonely Troll tavern (the precursor to the Winking Skeever). As with Riften before it, you can see see the bones of the city that appears in TES V, but perhaps even more so. It almost feels like a city that’s more in its prime in the second era compared to its state in the fourth. Stonework buildings stand tall and proud. The streets bustle with NPCs. 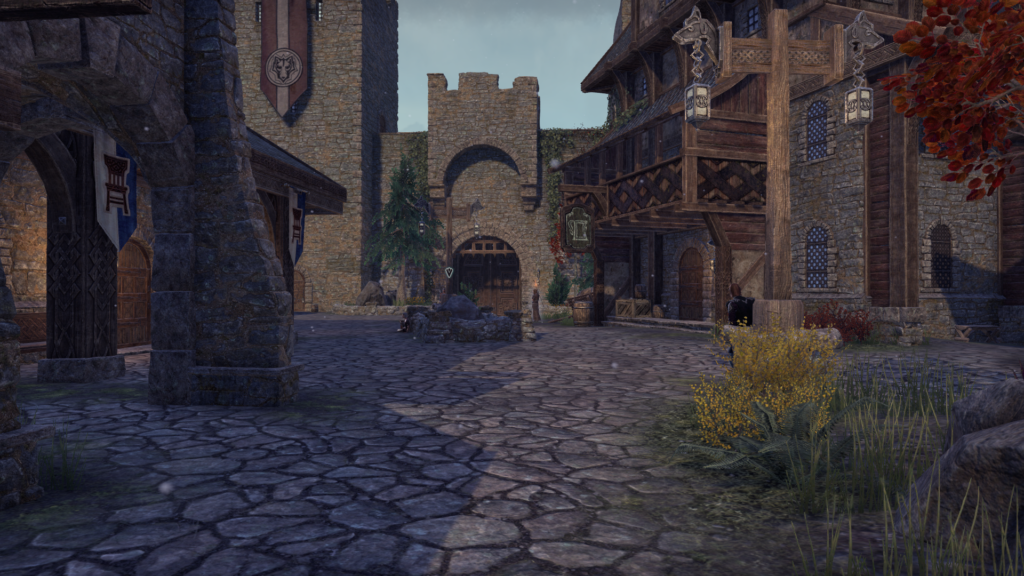 After a quick self-tour of the city, I ventured out into the wilds of Western Skyrim. At the risk of sounding the fanboy, I want to put on the record that the landscape within this chapter just might be the most beautiful work ever done by ZeniMax. There are a couple of reasons I believe this. Above all else, it’s not all the same. Woods and clear, running streams co-exist with mountainous, blustery regions to maintain the player’s interest while exploring. As in TES V, it’s a fairly desolate area, so many of the unfriendly mobs encountered are beasts of some kind. The snowy parts of Western Skyrim are beautiful, and there are vistas aplenty for gorgeous screenshots of mountain ranges or the Sea of Ghosts. (In fact, there’s even a purchasable player house in Solitude with a slightly limited view overlooking the glacier-filled water.) 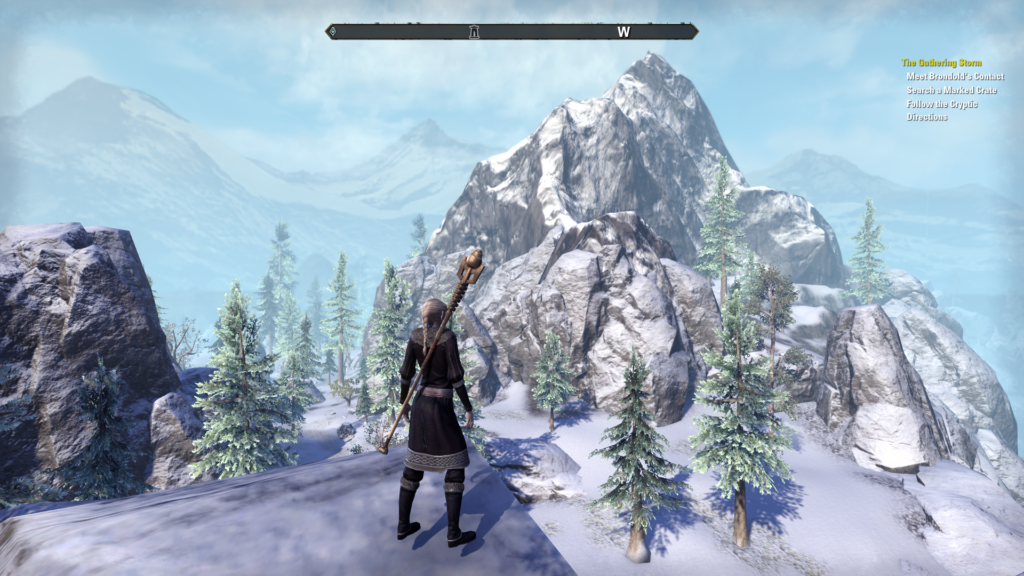 To create contrast with the brisk gusty overland, the Greymoor chapter has taken the unprecedented step of incorporating 40% of the landscape content in an underground region: the caverns of Blackreach. Blackreach is a long-forgotten underground system of caves and caverns once populated by the vanished Dwemer race. Blackreach is accessible via a series of elevators scattered throughout the surface of Western Skyrim, as well as a secret entrance hidden somewhere within the landscape. It’s the closest thing Tamriel has to Moria from the Lord of the Rings franchise. 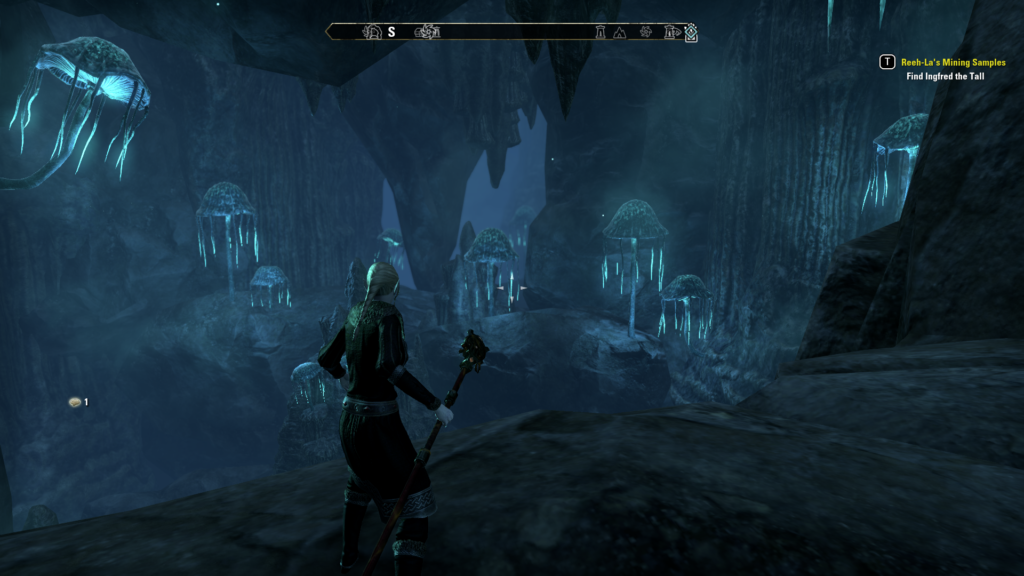 The pathways beneath the feet of the Nords stretch far and wide. So tall is the ceiling of the main cave in Blackreach that it contains an enormous ancient palace: Castle Greymoor. The bridges to the main entrance of the castle are guarded by waves of gargoyles and vampires, protecting the secrets that hide within. Yes, I fought through them the entire way to the front door, and no, I could not enter the castle. I assume the entrance must be tied to a main questline.

Other areas within the vast caverns sparkle with reflective gems and illuminate with glowing fungi. The sounds of crashing waterfalls echo in the darkness. The sights and sounds couldn’t be more different than the above-ground landscape of Western Skyrim, yet the beauty of one rivals the other. 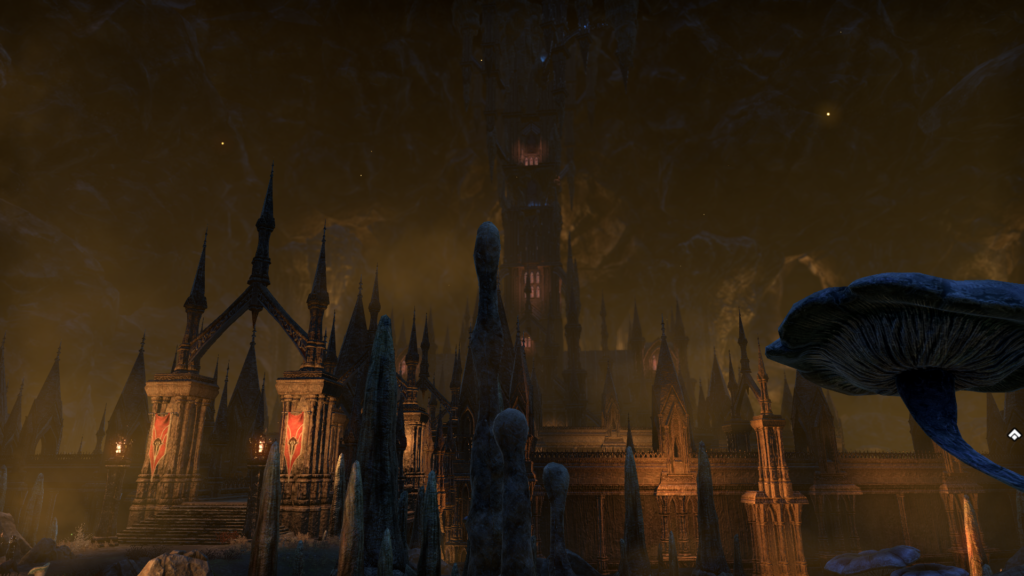 Antiquities is the first new non-combat related system being introduced into the game since player housing way back in 2017. The idea of Antiquities is to encourage exploration and lore seeking through a combination of mini-games and treasure hunting. Antiquity locations are scattered throughout all of Tamriel; they are not limited to the new zone. Rewards for finding antiquities include small housing items, epic gear, and pieces of a mount that require all parts to be found to be assembled. Antiquities includes a passive skill line that both unlocks higher levels of antiquity leads and allows for completions of more difficult scrying puzzles. Having only participated in very low levels of scrying, I did not initially understand what most of the passive skills were supposed to do, but here’s a video tour of my travails:

To begin hunting for an antiquity, players will find that a “lead” is required. Some leads appear in the Antiquities tab of the quest menu, and some leads can be found throughout the landscape. Leads must be scried with an item called the Antiquarian’s Eye, and the level of lead that can be scried is dependent on the number of skill points invested in the Antiquarian Insight passive skill.

Scrying is the first minigame in the system and is used to narrow down the area within a zone where the antiquity might be found; it consists of trying to reach specific points on the scrying board by finding paths of consecutive runes. The player has a certain number of “moves” to uncover the paths to each point. The more points are reached via the rune pathways, the fewer potential antiquity resting places appear on the map. For example, if all points on the board are reached, only one small region within the map will be highlighted as a potential antiquity resting place. If only half of the points on the board are reached, a player may have to scour two or three different points on the map to find the buried antiquity. 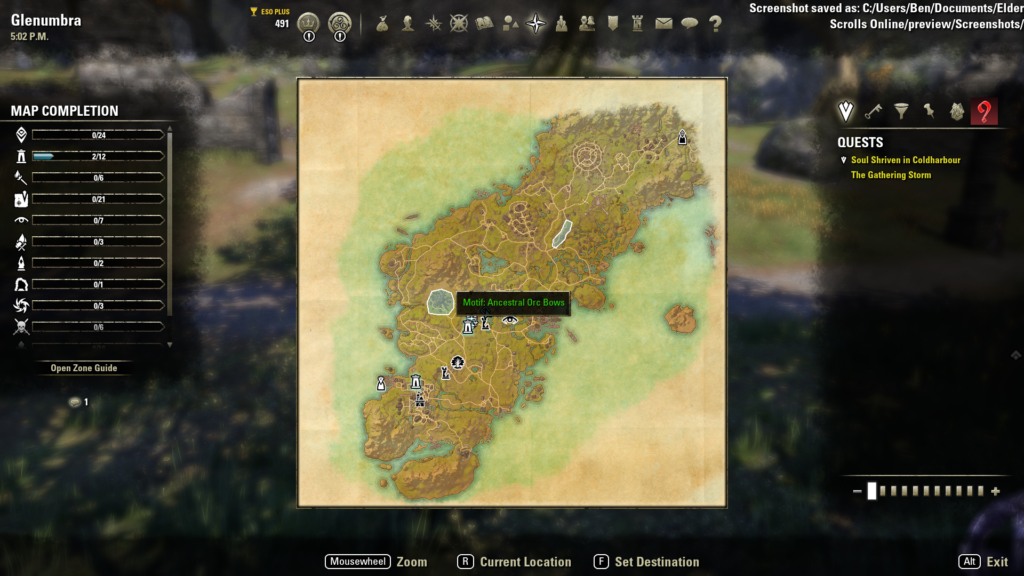 Once the burial region is highlighted on the map, the player must travel to that area and look around for the twinkling mound of dirt. There, the second minigame begins: excavating. The player is presented with an excavation zone and four tools that assist in locating and uncovering the antiquity. A certain number of turns once again limits how many times you can use the tools, so dig carefully! While the antiquity is the primary objective of excavation, the player may find other buried items within the excavation site – possibly even leads to other antiquities. 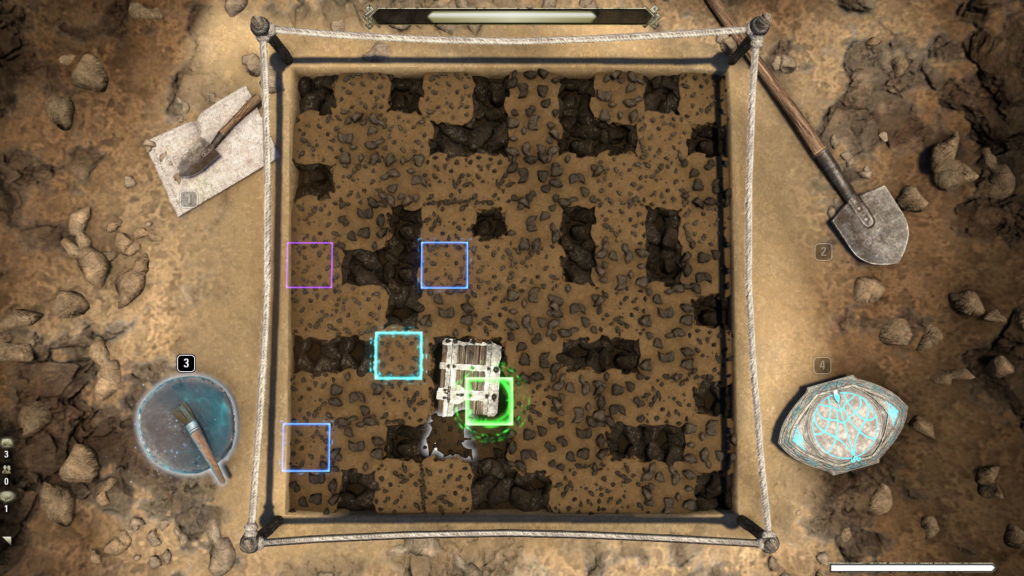 While it’s still rough in spots, my first impression of the Greymoor chapter is overwhelmingly positive. The landscape art in ESO just keeps getting better, as evidenced by both the above-ground and underground regions included in the release. ZeniMax has included just enough fan service to appease hard-core TES lore hounds, but not so much as to feel like a re-hash of TES V. Antiquities is what treasure hunting should have been at launch and provides a more interactive, leisurely activity than something like fishing or simply running around unlocking points of interest. Overall, I’m very excited about this release. My nostalgia for the zone combined with the newness of Blackreach and the promise of antiquities have the potential to make this chapter my favorite since Summerset.

Dive into the prologue quest today

As of 10 a.m. EDT this morning, players can play the Greymoor prologue quest in the game.

This perilous journey takes players into the depths of Blackreach to confront the schemes of Skyrim’s nefarious Icereach Coven, and it progresses the year-long Dark Heart of Skyrim storyline into the Greymoor Chapter. There are new collectible rewards up for grabs, too!
Once the Prologue is open, use the free Quest Starter, titled “Prologue Quest: The Coven Conspiracy”, from the in-game Crown Store. Players must then travel to the Fighter’s Guild in Daggerfall, Davon’s Watch, or Vulkhel Guard (depending on their Alliance) and speak with fan favorite Lyris Titanborn to accept the first of two quests, titled “The Coven Conspiracy”.

There’s also a new free-play event kicking off on Apri 1st through 13th.

Yes, this also means anyone who downloads ESO will be able to play the Greymoor Prologue quest for free! During this period, anyone on PC/Mac through the ESO Launcher, Xbox One (Xbox Live Gold required), and PlayStation 4 can download and play Base Game free and experience a world of adventure. Note: Steam’s Free Play Event will run from April 1-April 6. To participate in the Free Play Event, players can visit our Free Play page and select their platform. This event gives players access to the ESO base game, which includes four of the game’s original classes, 23 massive unique zones, and an epic main storyline.

Finally, the game is running multiple discount sales in conjunction with the prologue events and in the middle of its sixth anniversary festivities. Check out the latest Greymoor official trailer and let us know what you think about the preview!