We’ve all certainly met plenty of kings, queens, and other rulers in MMOs, and as a greater community, we’ve come to one unified opinion — they’re just as incompetent as politicians in the real world. So why not stage a coup and replace them with someone who is effective, vivacious, and smart? Someone like… you?

Sleepy is starting the revolution in Guild Wars 2 by taking to the throne: “My Sylvari Engineer has ruled Kryta with a firm but just hand for many years. Here she is waving to her minions.” 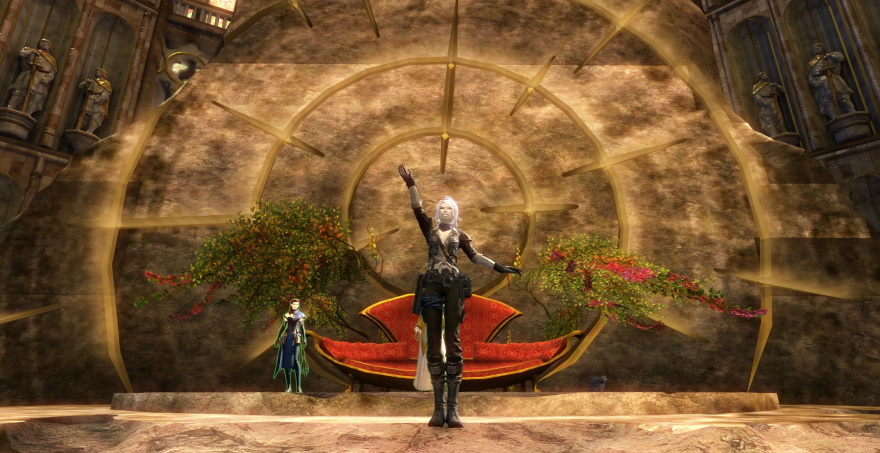 “I got a great screenshot of FFXIV leaders, except… it’s not a really great screenshot but here it is anyway!” said Toy Clown. “It’s the 7th anniversary of The Rising. In the picture is the leader of Ul’dah and several of her right and left lala-hands, then the tall point is the avatar of Yoshi-P as the minstrel that appears each year on The Rising to chat and sing a song! Or verses of a song.” 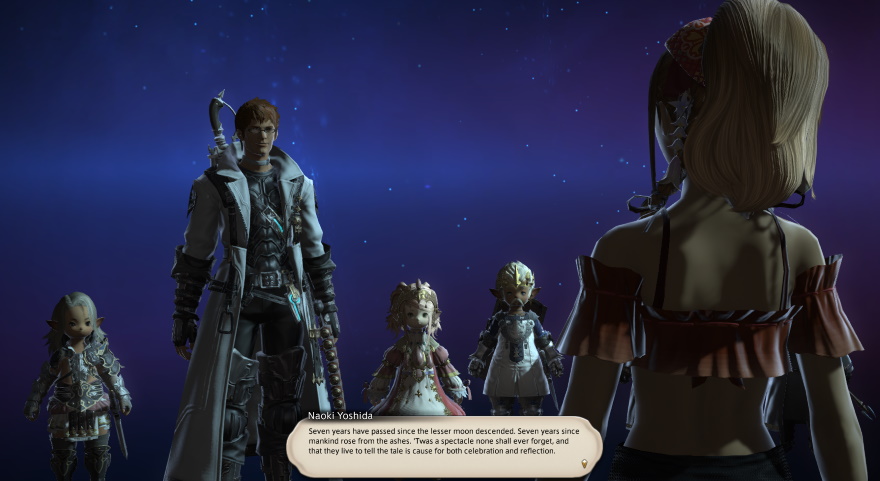 Over in World of Warcraft, Lucky Jinx is making friends with the Warchief-of-the-Week.

“I’m sure she doesn’t require further introductions, and she seemed rather bothered by me and the camera, so I took a quick shot and ran away before she would get seriously irritated. I’ve seen what she does when irritated.” 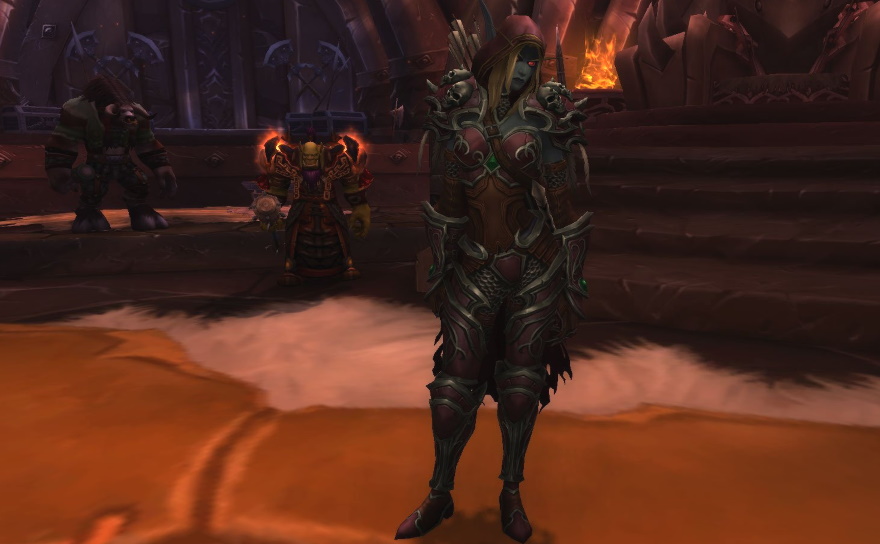 Vincent said that it’s been a “strange week,” and from the lack of context in this FFXIV, I can only imagine what shenanigans led to this moment. I’m gonna say… a failed bank heist, a kidnapping of opportunity, and a flight to an alternate dimension. 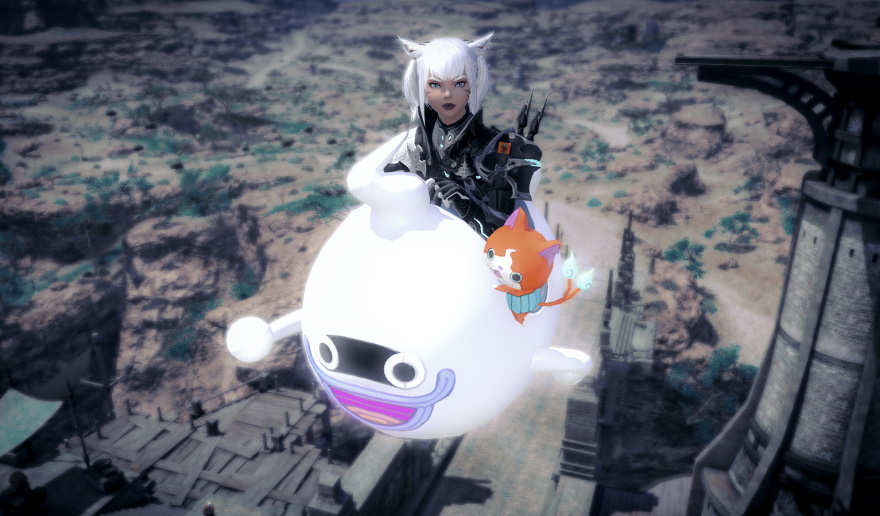 Hurbster’s been switching between MMOs as of late, but it seems like World of Warcraft served as a good landing spot. Here we’re at the good ol’ town of Redridge, where you might just encounter the legend known as Ghost Sabre and Queue, his winged serpent. 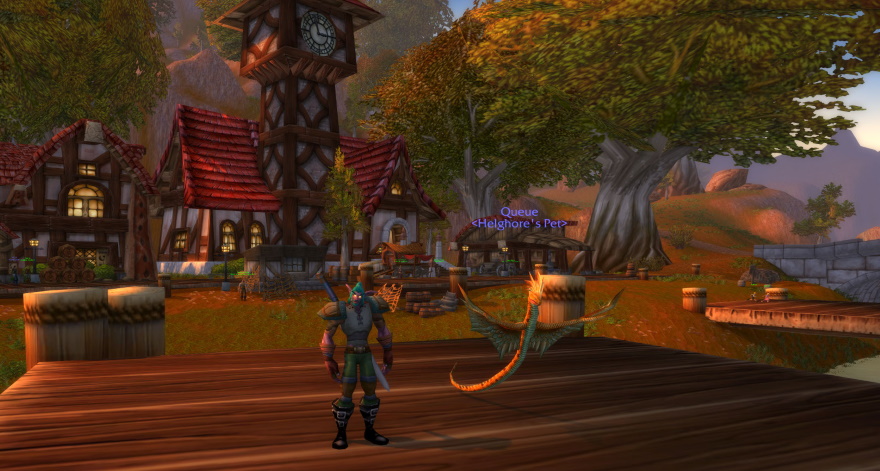 Wake up! Get up! Get moving, you slackers, and post some screenshots already! This week’s optional challenge is to show off one of your favorite weapons or weapon skins for us to ooh, ahh, and snort over!

(Cosmetically equipped over a stout club. ;) )

Yay, it’s official! Everyone in GW2 has to do what I say now.

You, peasant! I need to you go find some skyscale scales. I promise it won’t take long…

A mixed bag of offerings from me this week:

1) I returned to City of Heroes via the Homecoming servers (Indomitable server for me) and resurrected one of my old favorites, my martial arts street scrapper, Code Red.

While it feels surprisingly good to be back in the game world, and the gameplay mechanics remain surprisingly versatile and player-friendly, I confess that the game’s graphics have aged more severely over time than I expected.

I don’t supposed NCSoft is secretly working to emend their previous errors and give us City of Heroes 2 anytime soon? Alas, I didn’t think so. Sad.

2) A couple of screenshots from the single-player rpg Greedfall, which has dominated my gaming for the last couple of weeks.

The first pic shows my character looking pensive. The weight of the world feels heavy to bear sometimes :-).

The second pic shows my character flanked by two of his five companions. That’s the scientist, Aphra, on the right, and the native islander Siora on the left.

Everybody looks stiff and serious here because they just received some scary news that I dare not spoiler!

3) Lastly, this was intended to be a pic of the protagonist, Bayek, from the Assassin’s Creed: Origins game, posing with his hunting hawk, Senu.

But see that little cat photo-bombing things at the bottom of the pic? Yeah, everybody wants to get in on the fun, even random feline passers-by! :-)

Urgh. Some errors in the captions above. The CoH caption should read “I don’t suppose …”. Also, in the Greedfall companions pic, that’s Aphra the scientist on the left, and the native islander Siora on the right. Gah. I shouldn’t type when tired, I know!

Thursday’s Holy Mace in DDO glows, goes great with her eyes, and totally doesn’t look like the weapon of someone who would bargain the souls of her companions to a denizen of hell.

Just another shot from the same set cause I liked it.

The new Microsoft Flight Simulator has some big multiplayer potential. Here’s some screens from a couple group flights.

Sometimes the game asks me not to kill mobs but to lower their health, for a high level player that’s impossible, i can one-punch most low level mobs, so right now the best weapon i have is this Soft Foam Sword, for when you need not-to-kill a mob.

The monkey with a fez is my pet Charles.

A couple of my favorite weapon transmogs from WoW. I’m not the biggest transmog collector, but they sure are fun sometimes.

I took part in New World Preview and I was pleasantly surprised how many armors, how different they look and how good was dyeing system. There was one set from faction vendor, where hat looks like colonial wig and I love it.

I like also outfits in FFXIV and some players have great imagination. My friend – lalafel – was playing as a chicken for a long time. It was really funny and a bit scary at the same time, to see small yellow chicken tank running in front of a group to grab some mobs :)

Thank you for sharing the REALLY important information about an up-and-coming MMO involving armor variety and dye!

Guild Wars 2 outlines content plans through May 2021, with next chapter, Truce, coming November 17

The Daily Grind: Is the ‘forever game’ philosophy healthy for MMOs?

Counterstrike: Global Offensive players in Australia get a year-long ban for...