Pokemon Go’s already tried rolling back some of its COVID features, and between the original announcement of its June disappearance and the announcement of Gible Community Day – a pokemon that’s popular, rare, and useful – players should probably assume Niantic will try to revert the game a bit to its pre-COVID form. From a global standpoint, the numbers don’t look great, but I’d also argue that the changes could be more of a bust than a boom for the game.

Nerfs almost universally cost a game players. They almost never bring people back. And if nerfs hit people in the wallet, you tend to trade playerbase for profit. As much as I enjoy Pokemon Go, and as much money as it makes, the game’s recent referral program anecdotally doesn’t seem to be going well. I can’t imagine “playing outdoors on my smartphone” will be particularly high on people’s post-COVID list, so rocking the boat too much could send newly acquired players back out the door.

No, Niantic should probably consider keeping some changes, but adding incentives in others.

One of the early features Niantic introduced to COVID-era POGO was dropping the walking requirement to enter its PvP Leagues. As someone who actually walks while playing the game and thus benefitted from this system, I do feel that this change is most likely in POGO’s best interest, as it helps keep queue times low. I also would argue, however, that a ranked ladder match that requires sitting and concentration pushes the game away from its exercise and exploration goals, and that needs to be considered more when Niantic adds new features.

Similarly, the addition of Remote Passes – raid passes that allow players to do a raid from anywhere on Earth rather than just ones they’re standing near – has helped connect the global playerbase. It’s finally given rural players legit player support (read: non-spoofers) for raids when the previous situation encouraged cheating for the most part, though people with disposable income and time could also be “encouraged” to travel to cities more to play the game. While that arguably does help with socialization and perhaps exploration if you’re from out of town, long drives to the city don’t exactly sound like great exercise, and raiders often travel in cars to hit as many raids as possible.

And this doesn’t even begin to discuss how Remote Raiding and other features have helped people with limited mobility participate in the game, which is another group that’s long felt that the tech company’s ignored them.

Since the start, Niantic has planned to cap remote raid numbers and nerf their damage. However, instead of punishing players who use Remote Passes, Niantic could give incentives to play in meat space. I imagine it would be possible to add a “Mega Evolution Slot” for players using the daily Free Pass for raids only, encouraging people to go out for a minor DPS boost but also act as a lure for on-call Mega use.

Very few friends or people on my friend’s list take advantage of Megas. I’m not a programmer, but having done simple games, I do wonder if Niantic could create a trigger in the lobby to activate a Mega during the loading screen of the raid, then deactivate it during the rewards page. If they could also disable the group buff, that would at least allow people to see how much stronger their pokemon are in their Mega form while also sticking a little closer to the Main Game Series Megas, which were a once-per-battle feature. A popup, perhaps warning about the activation/deactivation limits (like no group buff or bonus candy), would also act to inform players about aspects of the feature they’ve been missing out on.

Conversely, local players could instead have a “hardmode” option that gives better rewards but has a tougher raid boss. Online communities are often a weaker bond than real-world ones, but they can become stronger. Especially for rural players, having some kind of connection would help them on board. If a rural player could perhaps join a group in a city and visit them once in a while for hardmode raids, that might help cement the bond, which also would help Niantic retain those players.

Plus, making online play less of an option might make it easier for a player to leave. As we’ve discussed, big game data can predict when key players may take a chunk of a community with them, and unless Niantic also wants to track that, it may be wiser to work on retaining and increasing communities rather than trying to place restrictions on them.

Finally, there are the EX Raids. Niantic could simply limit EX Raid invites to those who raided in person. As a kind of compromise, especially for rural players, the invite players are allowed to send could function doubly as a remote pass. That way, small communities may be motivated to work together but also feel as if they can get support from online communities. I think it would be fair for Niantic to cap EX Raids at five remote players, as that would require five in-person raiders and online organization the POGO-pug communities usually lack. 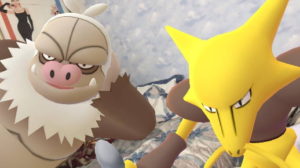 Many changes already here for good, like no walking for League PvP matches, increased spin distance (“the foreseeable future“), additional gift space, and one-hour incense. These changes make the game more accessible to a wider range of people, but I also argue that they allow for casual playing of the game while socializing with others. In fact, I’ve coaxed a few lapsed players back into the game when casually mentioning some of the play-from-home benefits. And yes, I have met some people to play outside, though mostly to walk in empty parts of town few people visit, so as to maintain social distance.

Gible’s Community Day just from the announcement makes me wonder if Niantic will try to change that. Several of my Discord communities have floated ideas of gatherings, something I’m not comfortable with. More importantly, however, is the question of how Gible’s CD will be executed. Past events were limited to three hours, with a one-hour post-event evolution window, so people could trade and sort their findings. Extending the event during COVID to six hours with a two-hour post-event window was a major boon. While I’ve largely played these myself, the extra window has made it possible for working friends to come and go more easily or jump on their phones occasionally when distance trading was active.

Frankly, the friends and community members I’ve (virtually) done this with tend to be on the line between casual and hardcore. They may raid a lot, walk blocks to attack a Rocket Stop, or even take time off of work to play. And that was before COVID. While recent restrictions have added a few additional hoops to jump through when being social, doubling the event time and post-event cooldown has made the event more relaxing. Many of us tended to delay a meal to get the most out of an event, while the long-form COVID events almost encourage us to take a meal break rather than pack some granola and water.

One potential way of increasing the social aspect, though, may be raiding. The upcoming post-CD release of the featured Pokemon’s Mega evolution is an interesting tactic, but it also cuts into the post-event cooldown. It effectively extends the event, as many players know that Mega Evolutions tend to be hard to recruit for once people have unlocked enough Mega Energy to evolve the pokemon and gain additional energy by walking it.

If Niantic were to include a new Mega form specifically for Community Days, it would do a few things. First, it helps give real-world gathering points. Lures do this pretty well already, but raids need a little more communication. Having people active outside and granting raids checks the social and exercise goals for the game. While it could be argued that it distracts from catching, I’ve found many players at this point have some kind of auto-catcher, like the Go Plus or Pokeball Plus, so it doesn’t completely cut down on catch time. It also helps create more breaks in play during a rather long event, rather than drag it on even further.

Admittedly, Niantic will eventually run out of Mega Pokemon to release. However, by that time, Niantic could finish a new feature from one of the games, such as adapting Gen 8’s Dynamax Adventures, or any of the features it’s been working on (which I mentioned when discussing Niantic and the Pikmin IP).

Or maybe Niantic could just leave the current COVID Community Day format alone and let communities choose how they want to re-engage the game in these new uncertain times.