Amazon and Smilegate have released a detailed blog post this afternoon focused on the upcoming Lost Ark’s founder packs. And cats. The cats are the star of the show here.

While the game itself is planned as a free-to-play title when it launches in the fall, the founder packs are loaded with cosmetics, beta, access, and headstart, meaning the companies are going to make a ton of cash selling these, free-to-play be damned. The studios also reiterate that one of the reasons for the new bronze pack is the regional pricing exploit, as we noted earlier this week.

“Since the Lost Ark Founder’s Packs have been available for purchase, we have seen evidence of people exploiting regional pricing through the use of alt accounts. Unfortunately, this behavior compromises the game economy for everyone as in-game currency is included in the Platinum, Gold and Silver Founder’s Packs. This hurts all players. To address this exploit, we have normalized the price of the Founder’s Packs to one global price (converted into regional currencies). We understand there are players that live in countries where regional pricing is important, especially for entry level participation, so we are now offering a new Bronze Founder’s Pack to give more purchase options to our players in all territories. The Bronze Founder’s Pack does not include in-game currency[.]”

So now there are four packs, with the cheapest being $14.99 for headstart and beta, plus a minipet, title, and month of premium. The silver, gold, and platinum packs run up to $99 for all of that plus additional chunks of currency, supply crates, character slots, cosmetic gear, mounts, and so forth. There’s even a train and an exclusive login screen for the top tier. And yes, everyone gets the cats. 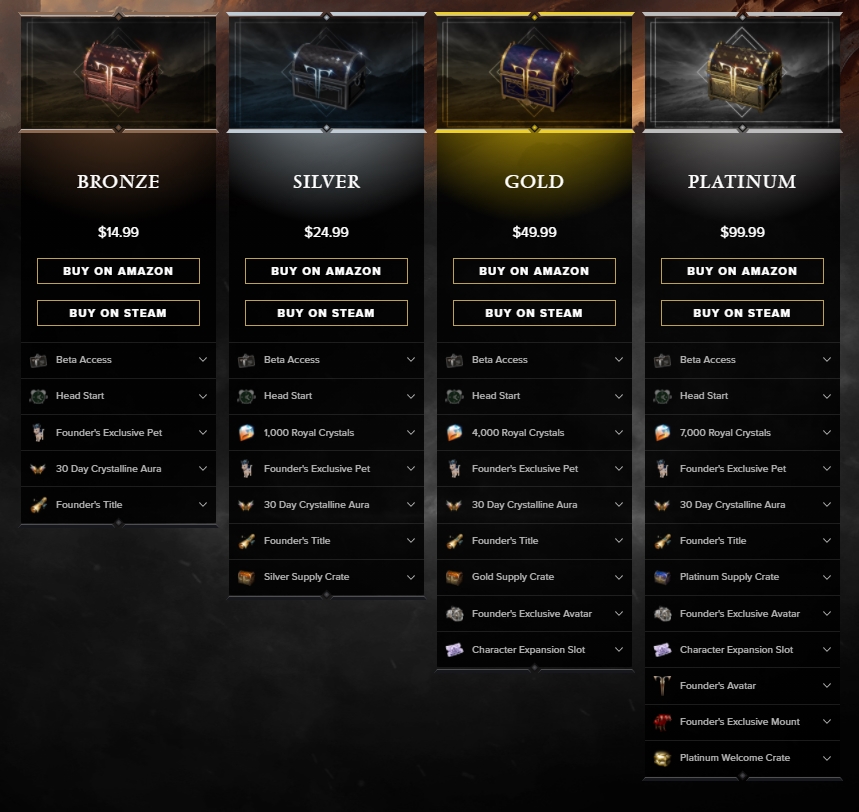 when does the beta start?