All right, that was a nice detour. It was going to be a long run in Lord of the Rings Online, so it was pretty nice to have something of a diversion away from the absolutely massive length of things that would otherwise be waiting for me in this game.

At first I was a tiny bit confused on how I was supposed to head to this fall festival that’s going on in the game. When last I left the game on the shelf, I was in the middle of a swamp with all sorts of big, angry bugs. Eventually, though, I realized that one of the items that was granted to me from the initial starting quest literally transported me to where I need to be. And luck of luck, it took me to the Party Tree of the Hobbits. 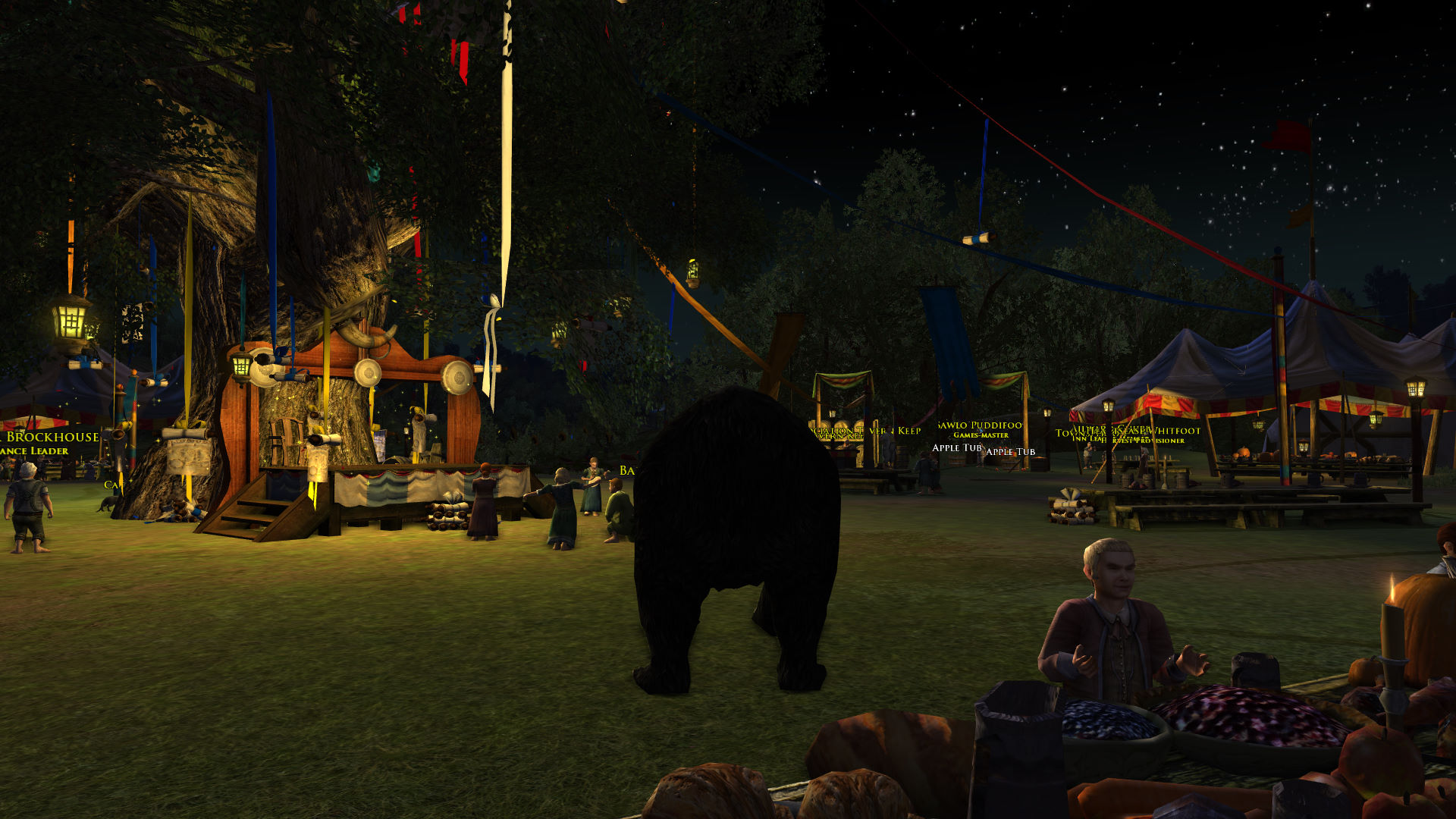 I experienced the Hobbits’ starting area before one time as a Burglar some long while ago, and I remember the Shire being an extremely long and drawn-out zone, but it was also a place that was filled with whimsy and enjoyable quests that really hammered home the idea of Hobbits just being a bunch of goofy, slovenly people. Much of the quests that were awaiting me at the Party Tree were very much following the same mold, with a whole lot of extremely lazy yet well-meaning quests to take on.

At the same time, a lot of these quests were… well, they were pretty simple, to be very honest. I wasn’t exactly expecting a whole lot of depth out of either a seasonal event or out of the Hobbits, but moving apple tubs, trying (and failing) to follow a dance lesson, and running around to try to get other people to break their bashfulness to dance wasn’t what I’d call extremely compelling stuff.

And then I went into the Haunted Barrow. 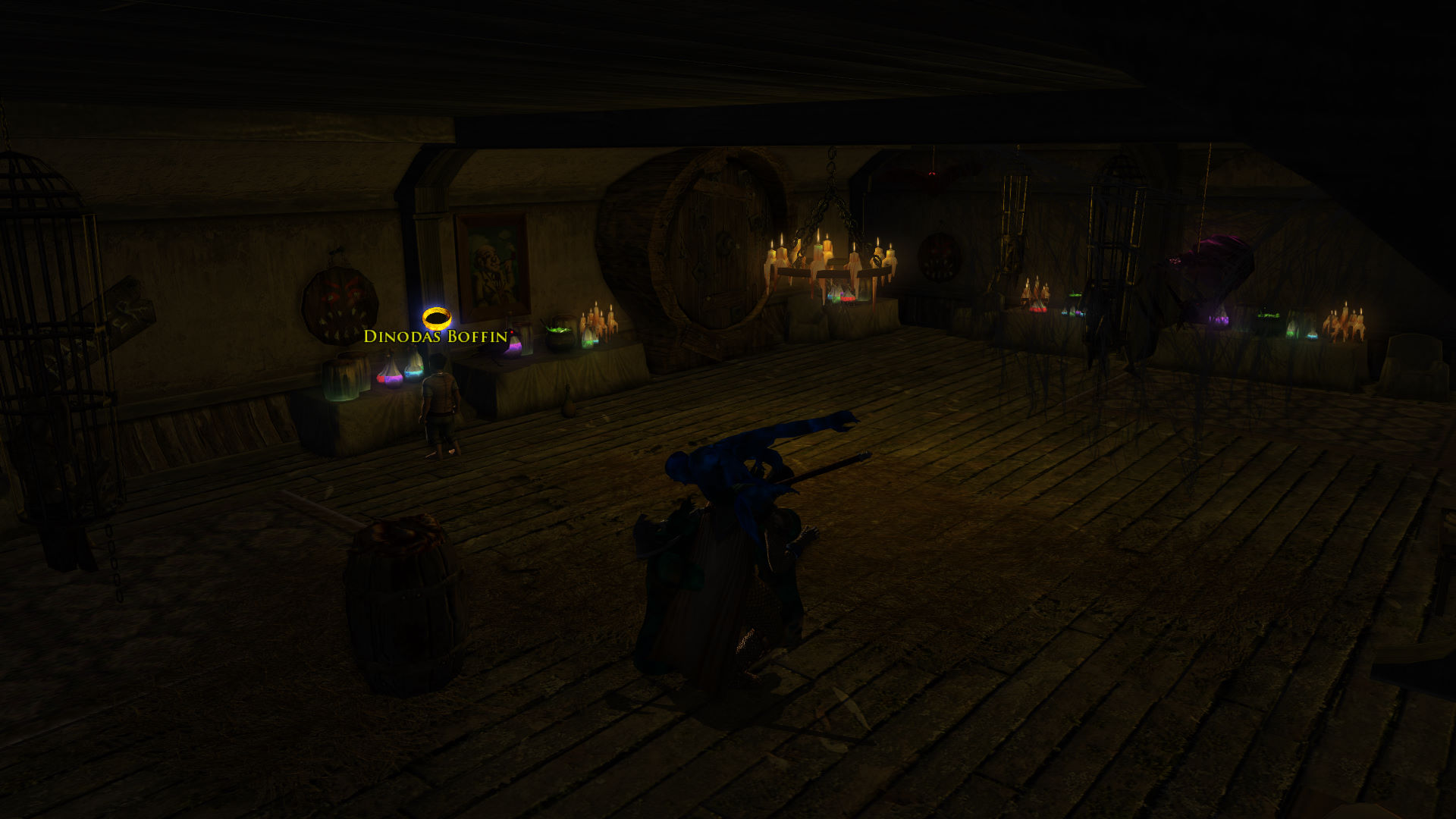 Friends, let me tell you about the Haunted Barrow. This place was just Halloween delight incarnate. Once again, it was extremely cartoon-like, with wonderful little traps that caused me to go either go blind, get held up by ghosts, or suddenly get beset by bats. On top of that, there were adorable jumpscares that popped up from kegs or boxes, and the entire place was absolutely covered in creepy-cute decorations. It was a bit of a maze, but not a genuinely frustrating one. This location pretty much made up for everything that I’d experienced up to this point.

The questing kept me around for a little bit longer, but it was also about time for me to call it a wrap for LOTRO. I’m glad the voting pulled me in this direction, though, because I had been missing out on a lot of Halloween goodness in my MMO gaming for the past couple of weeks, and it was nice to be pretty much fully embroiled in that.

That’s kind of what LOTRO really is, I’ve learned. It’s all about being completely soaked in the game’s IP and setting, swimming around in it like a pig in slop. As slow and plodding and aged as this game really can feel, it also does feel pretty well-loved, at least from the little bit of the surface I’ve scratched; I’m sure that not many feel the same way what with SSG having no end of trouble getting its LIs right, but having been away from the game for a while, it was nice to experience the love of Middle-earth again.

The Party Tree consolidated all of that delight of this franchise. From the playful questing, to the setting itself, to the callback scene with the fireworks ending with one last display of a fireworks dragon like it was in the film, this whole thing was just oozing with affection for the IP. 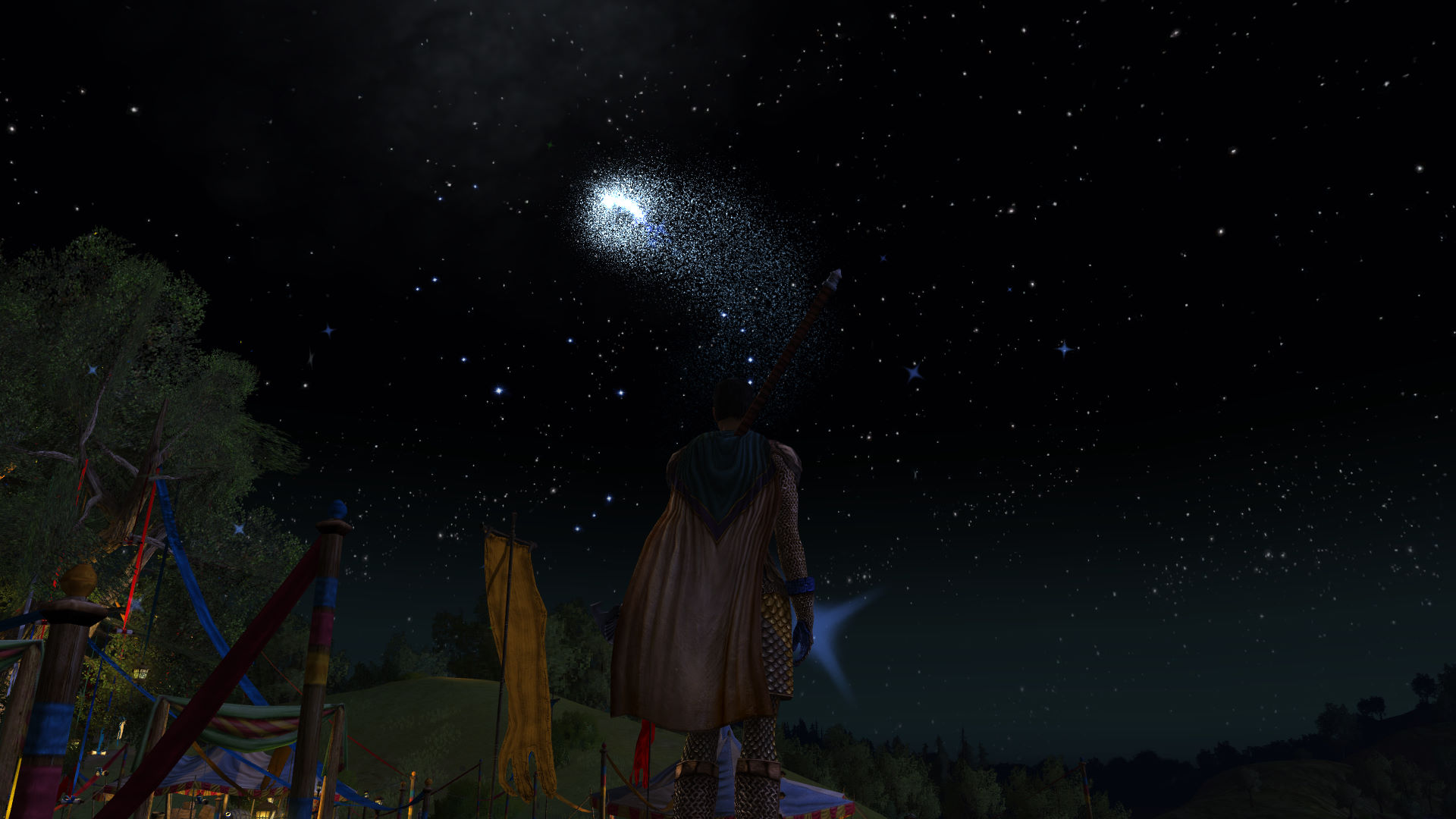 It was nice to be back into this game, as bad a choice as it was for this column. Even so, I don’t think I’ll be coming back to it very much (or at all), mostly because I just don’t have the time to approach this game at a casual level. As I’ve said before, blitzing through the quest text is kind of a disservice to the experience, and it’d be a shame to not really allow myself time to bask in all of the adoration for this fantasy world. I just don’t have the time, frankly. Or the inclination. Or the oomph to get through all those levels.

I genuinely hope this game can keep going on, though. I hope it does right by its fans. It would be a real shame if this title were left to languish and diminish because its stewards are left to rest on their laurels as the only official LOTR MMORPG in town.

So, we move in to this next game, Avorion, and having read a guide, I’m also thinking that adding this game to the list was a bad idea simply because it looks hyper complicated. Still, I’m going to give it an honest try. I just bring this up because if this one does become too much to wrestle or otherwise isn’t something I can write polls for, then I reserve the right to swap over to the runner-up game: Elite Dangerous.

To that point, I don’t really see a way to write a first poll for getting into Avorion. Whether that’s a portent of things to come or just a matter of not really digging into the game much is yet to be seen, but I did want to at least explain myself. Whatever happens, I hope you’ll all join me next week.