So if you somehow managed to miss it, let me recap: World of Warcraft’s community manager Lore recently gave some feedback on the many complaints people have had about the Azerite armor in Battle for Azeroth. It was not good feedback; much as when people were making observations about Warlords of Draenor being what scientists call “a big steaming pile of wombat turds,” the response is basically the designers swapping back and forth between “everything is fine” and “well what do you want us to do about it now?”

There’s a lot of dumb stuff to pick apart in there. But that’s not actually what I want to talk about today because there’s one specific misunderstanding that deserves attention. To quote:

“The point about traits being ‘useless and uninteresting’ is interesting considering that you also make the point of ‘every gear change requires simming.’ These two points are kind of at odds with each other.”

I don’t want to make guesses about Lore’s personal feelings here, simply because it’s difficult to tell how much of that response was his personal thoughts and how much of it was the corporate line. But it’s still worth analyzing because that statement is both wrong and dumb. Those points are not at odds with one another, and there is a very tangible difference between things that are interesting and ones that are not in terms of gearing.

This is an issue which isn’t limited to World of Warcraft, either, which is why it’s useful to talk about in a larger context. A lot of people – myself included – have noted that Final Fantasy XIV has pretty uninteresting gearing, despite the fact that math is pretty reliably involved in statting things out. But to understand, we have to make it clear what qualifies as “interesting” here. And since we were prompted by WoW comments, let’s put things in that context with some sample Enhancement Shaman abilities.

For starters, let’s imagine you get the following two traits on a piece of armor. These are purely hypothetical traits, so the balance isn’t actually important, but just read through them.

Thunder Crash
Each of your damaging abilities has a chance to grant you 100 Mastery for 10s.

Cool Temper
Each of your damaging abilities has a chance to grant you 100 Haste for 5s.

Those traits will require some math to sim out and an evaluation of the proc chance, but neither one is actually interesting. Your rotation, abilities, and so forth will all be exactly the same whichever one you pick. There are lots of reasons why you might pick one or the other, depending on uptime and stat weights, but they’re still boring. However, imagine that the traits looked like this:

Thunder Crash
Stormstrike now has 10 charges and 50% Maelstrom cost, but each use of the ability places a charge of Reactive Thunder on you for 10s. When Reactive Thunder wears off, you take damage based on the number of charges.

Cool Temper
Each use of Frostbrand applies Hyperconductivity to the user, which increases Windfury proc chance by 10%, increases Stormstrike and Lightning Bolt damage by 10%, and decreases Frostbrand damage by 15%. Maximum of 5 stacks. 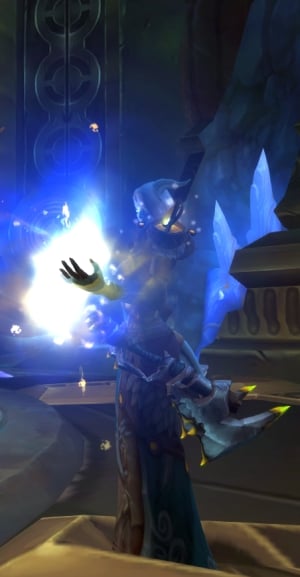 I have no idea whether these two traits are balanced, but both of these are interesting picks. Both of them completely change how I play my class and what abilities I prioritize, and the math is now going to also take different playstyles into account. Cool Temper asks me to make use of an ability that is normally not a core part of my rotation, and Thunder Crash completely changes my vulnerability, my damage output, and my ability prioritization.

Obviously, both of these require math to balance out, like figuring out how much damage Thunder Crash will do and whether it’s best to burst out lots of Stormstrikes or use them more conservatively. It might even be that on paper, that talent isn’t useful. But since at this point we’re spitballing, none of that is important; what’s important is that it alters your priorities and how you play.

Here’s where we see the difference between “interesting” and “uninteresting.” It’s not that the former doesn’t require math; it’s that the former asks you to do math about major changes to how you play the game. Choosing one talent or the other makes a difference, and there’s a potential reason to pick one that might be sub-optimal based on the playstyle change.

By contrast, the first set requires just as much math to figure out which one is better… but once you do so, you’re done. You don’t actually care about either ability. Your way of playing the game remains identical either way.

FFXIV gearing is called out on being boring for this exact reason. A higher item level is pretty much always better, and while you will want to run some math to determine what your optimal melds are (and in rare cases, sub in a lower item-level spot), it’s not actually interesting. I know I’ll be replacing my 370 chestpiece soon with a 390 chestpiece, but that won’t actually alter my Ninja’s rotation in any fashion. It just means bigger numbers.

By contrast, the original Guild Wars had some pretty interesting ideas with gearing from the start; there were diverse stats on piece of armor that didn’t always directly translate to pure damage most of the time, which often enabled additional builds, and your runes would always alter your overall skill level in ways that could make a big difference. It certainly wasn’t perfect, but it was interesting. It required some consideration and thought, and your choice of what to do with your gear mattered (even in a setting with flat-curve endgame gearing).

Here’s the funny thing, though: More interesting gearing is not always a net benefit for a game. Sometimes you actually want gearing to be more boring because you want upgrades to be clear and straightforward. If, for example, you want to be sure that the higher item level is always superior to the lower one, simple gearing is the way to go.

This should be fresh in the minds of WoW players simply because the game just played with this sort of system in Legion. Legendary items were problematic in their means of acquisition, but they were most certainly interesting. Pretty much every one of them had some notable effect upon the way you played and valued abilities. Having a stacking buff on Divine Storm between uses meant that Divine Storm was useful to my Retribution Paladin even on single targets, a change in play. Other players had a different Legendary, and that meant a different way of playing.

In fact, the big problem there was that the abilities weren’t well-balanced with one another and that it was impossible to get Legendary items through any means aside from random luck, both of which rather skewed matters. You could get lucky and get great items early or go the entire expansion looking for the ones that would really light your style on fire. But that was, honestly, a pretty straightforward problem to address.

Unfortunately, Azerite armor addresses that problem while also making the items particularly uninteresting. As has been illustrated, that isn’t about the numbers; it’s about what actually changes when you gain one ability or another.

Numbers are always going to be a part of determining optimal play. If you really want to know your best options when you’re gearing up, you’re always going to be doing the math and figuring out how much something increases your overall performance. That’s as true when selecting abilities as it is when selecting armor traits or the like. But it’s also totally possible to have uninteresting things requiring math or interesting ones, and the two are not mutually exclusive.

So don’t believe someone who says you can have one or the other. You can’t have interesting stuff that has no relation to math whatsoever, but that’s not really on the table. And saying otherwise is… well, kind of dumb.

Or intentionally disingenuous. You make the call there.