Activision–Blizzard has posted its Q4 2015 financial report, touting record digital revenues up 20% year over year, thanks in part to game exports to Chinese audiences, but revenues were down quarter-over-quarter and year-over-year. CEO Bobby Kotick says that once the company’s acquisition of King Digital is complete — and isn’t yet, so it’s not reflected here — “[Activision] will have the largest game network in the world, with over 500 million users playing [its] games every month.”

According to the investor call, 2015 was the first year more than 50% of Blizzard’s revenue was derived from sources other than World of Warcraft. Mike Morhaime told investors that WoW saw quarter-over-quarter growth for the game following last fall’s BlizzCon. It is unclear how growth is defined in this context.

We aren’t hearing hard numbers on a World of Warcraft subscriber bump or dip today, thanks to Blizzard’s decision that Q3 2015 was to be “the last quarter [it planned] to provide subscriber numbers” because of other metrics (like “engagement” metrics) that it claims are “better indicators of the overall Blizzard business performance.” The game dropped 100k subs in Q3 2015, 1.5 million subs in Q2 2015, and 2.9 million subs in Q1 2015 following the launch of the Warlords of Draenor expansion in November 2014. At last known count, it stood at 5.5 million subs, down from its 2010 peak of 12 million.

The Legion expansion is still expected to launch this summer following the franchise’s movie.

Gamasutra notes that analysts predicted a record $2.2 billion for the quarter compared to Acitivision’s predictions of $2.15 billion, neither of which Activision reached with its $2.12 billion yearly revenue, partly a result of “foreign exchange” currency issues. Activision stock is down slightly on the news as well. While King’s acquisition isn’t reflected in Activision’s numbers today, its own fiscal report wasn’t glowing.

As to other games in the company’s portfolio, Hearthstone logged over 40 million registered players prior to the last adventure launch, while Destiny counts 25 million registered users and is still on track for a 2016 expansion and 2017 sequel. Overwatch launches soon too:

Blizzard Entertainment’s team-based shooter, Overwatch, will be coming to PC, PlayStation 4, and Xbox One in spring of 2016. An initial closed beta test ran from October 27, 2015 to December 10, 2015, and the game reached top-viewed status on Twitch. Closed beta testing resumed on February 9, 2016. 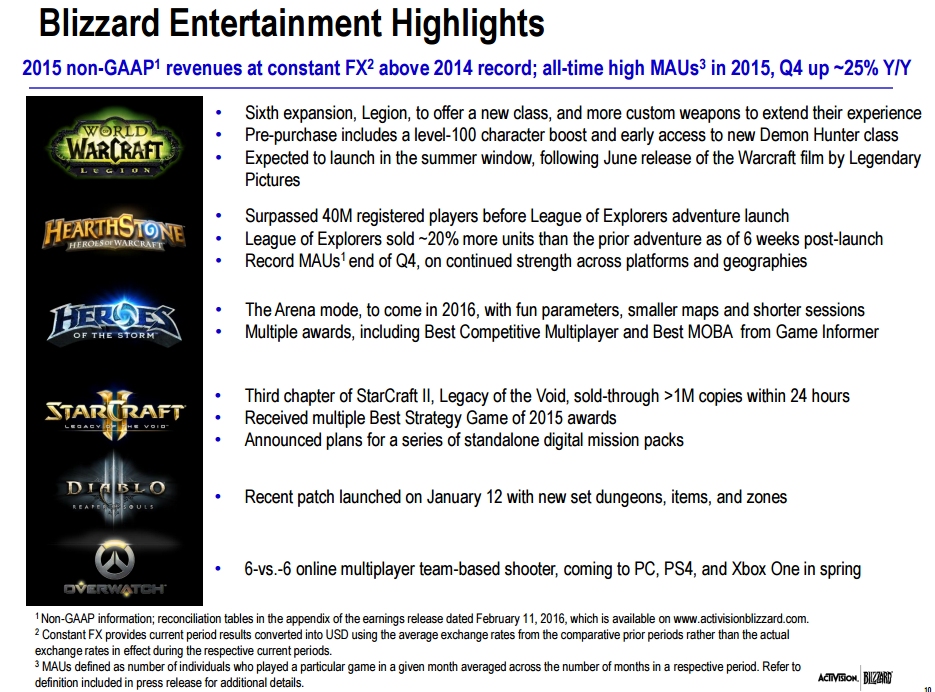