Superdata has a new seasonal report out on the state of the digital games market. The research firm’s April figures show that World of Warcraft once again dominates the pay-to-play online games market, followed by classic Lineage, Star Wars: The Old Republic, TERA, and Blade & Soul — the last of which might surprise you. Dungeon Fighter Online also makes the list as third-highest-grossing free-to-play MMO, though as usual we point out that games like World of Tanks and League of Legends are also considered for this category.

Overwatch is missing from the data thanks to its recent release, but expect it next round. “Activision Blizzard also released Overwatch this week, a multi-player shooter title deliberately designed for competitive gaming,” wrote the firm in May. “During the first 48 hours of its release, Overwatch totaled 5.4 million viewed hours on Twitch, thanks in part to a pervasive marketing campaign on the platform. It outperformed recent hit game Fallout 4, which saw 4.2 million viewed hours during the first two days of its launch.”

The top-five lists are below. 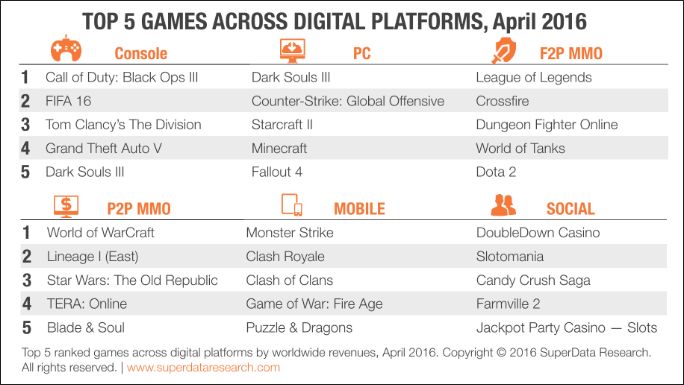