Hi-Rez Expo 2018 ended this weekend, which means my opportunity to play the studio’s new 1v1 mobile game Bot Smashers has also ended. And that makes me sad. Like last year’s SMITE Rivals (RIP) that I loved so much, the only place to play was the expo show floor. No expo floor means no playing. Now I must wait for a general release to battle some more bots — and right now there is no set time.

What exactly is Bot Smashers, you ask, and why did it enchant me so much? Well that’s exactly what I am going to share with you. Then we can wait on the game together! Hopefully the wait won’t be too terribly long; Rory Newbrough, Bot Smashers GM and design director, noted that the studio hopes to get testing for the game started in the spring, then follow with a soft launch soon after.

Before I spoke to anyone, I dove right into the game. Hey, it was sitting there on a tablet just beckoning me, ok? Push play — got it. See, I already rock at this. Up pops the play field which looked nice, with vibrant colors that aren’t overpowering. The standard red vs. blue color scheme was familiar, and the UI was simple, just names and a robot scorekeeper waiting for the action to start. With a simple swipe it was pretty easy to discern how to move the units into battle against the opponent. Yup, I’ve got this. Adorable little robots then charged, lumbered, flew, and skittered across the play field toward the other side to be met by the red robot army.

And that’s where I very quickly realized I likely did not have this; I had no other idea what was going on. What is the number in the globe? What are the different bots now clashing? Why did that whatever-it-is destroy my whats-it so swiftly? Wait, why doesn’t that actually go attack anything? And, why is that doing that? It wasn’t as much fun not knowing what was going on, and the game ended (spoiler, I lost) before I could suss it all out. As I learned with Hand of the Gods at last year’s event, the demos often toss you right into mid-game. It was time to summon a live tutorial. (Don’t worry, there will be a real tutorial in game — an important fact since there won’t be devs within arms reach to nab and give you a personal one!)

Cue the personal tutorial. I got a walkthrough of the build button, learning about the different base build configurations you could scroll through — there were hundreds I came to find out! — as well as the various types of things you could place. Besides bots, I learned there were spells and stationary structures (Aha! That’s why that unit wouldn’t move out and join the battle!). Red nodes are for spells, blue nodes are for air units, green nodes are for ground units, and yellow nodes are for turrets. Got it. Then I became more familiar with the bots themselves and selected a few that looked pretty cool. I also picked out a few spells and some turrets and we started a match.

My confidence in understanding the game was much higher and kept growing. Big bubble number is power, check. Oh that’s why that bot does that, got it. Oh that upgrade resets the cool-down timer! And those air turrets totally ignore ground units. I’m on a roll. Nothing was complicated; just taking a moment to familiarize myself with the components made all the difference. Now, I was ready to really play!

MJ smash! Armed with a better inkling of the basics, I started in on a few more matches. As my station was having a technical issue, I was initially just playing versus AI. (This was probably a very good thing for the start as it boosted my confidence more before I met that seven-year old prodigy.) I got stomped again, but as I became more accustomed to the game I was able to discerned a strategy to crush my AI opponent. Victory was mine! Through experimentation, I found that I preferred to have at least two spells, and I better appreciated where each node type was physically placed on the board. I soon graduated to live opponents, and was able to win some of those games as well. I also found that my favorite build I perfected against the AI didn’t necessarily serve me well in some of my other matches. So I needed new strategies. 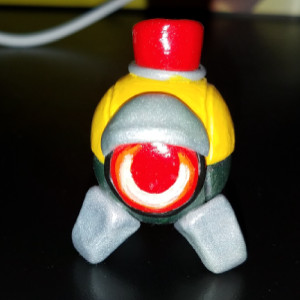 Strategies: This is where the game comes alive. It is very simple to learn how to play, but as you get deeper and deeper into the strategy the game can get much more complex. Although the type of node is preset depending on the layout you choose, which unit or structure is placed on the node is selected by you — unless you let the game auto-choose for you. I tested different configurations of ground/air turrets and melee/ranged, ground/air bots. Placement of node could matter as much as what was placed on the node! I discovered that putting my powerhouse way in the back helped protect its structure from attack. I balanced fast vs slow bots when deciding who goes in front and who gets placed more behind. I also figured out that some bots turn to attack whatever enemy bots are nearby, while others will ignore them and move on to the structure you sent it to. I was having a great time trying to find the best ways to counter different bots, all the while knowing that I’d have no idea what configuration of bots, structures, and spells my opponent would bring into my next match.

Sadly (or maybe luckily), I wasn’t able to join in any of the Bot Smashers tourneys that happened, which is a shame because the prize for winning was an incredible handmade bot. I say luckily because I know I wasn’t at the caliber of some players who were coming and spending hours playing each day! Remember that youngster I mentioned earlier? Yah — I didn’t want to face him until I had some more playtime under my belt. I watched as he came from behind with a surge and won one of his matches in the very last second of play! Having to leave to cover the event was a handicap as far as getting totally pro goes.

Knowing that my playtime was restricted to a very controlled demo, I was aware that what I was experiencing was not a complete game yet. Some of the little issues I ran into (like never finding your favorite base layout again once you pass it because there are hundreds to scroll through!) could easily be already addressed. I also had questions about future plans. It was time to summon an interview! And that, my friends, you can read later this afternoon!