END_OF_DOCUMENT_TOKEN_TO_BE_REPLACED
Throughout its almost 15-year lifetime, EVE Online has walked a fine line between developing new features and iterating on existing gameplay. Development has to push forward on new features to keep the game fresh and attract new players, but balance issues can emerge in existing gameplay that equally make the game stale or less enjoyable. CCP Games hasn’t always responded to these issues in a timely manner, at times leaving known balance issues in the game for months or even years because development resources weren’t available to tackle those specific issues.

This strategy has been challenged recently by Council of Stellar Management member Jin’taan in his article “Balance is not optional,” in which he argues that CCP shouldn’t even be making balance changes compete for development time with other features. Player Capri Sun KraftFoods followed up with a look at EVE‘s modular item attribute system, arguing that almost any balance change can be implemented quickly and easily just by tweaking the right attributes. Could it be that easy to iterate on EVE‘s frequent balance issues, or does the nature of the game necessitate caution?

In this edition of EVE Evolved, I break down the case for quicker iterative updates on balance issues, look at some of the challenges with balancing a game like EVE, and look at CCP’s new balance team. 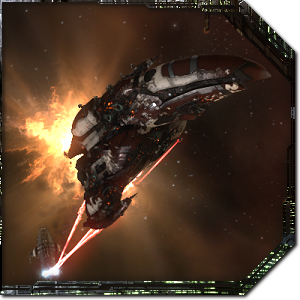 Before you grab your pitch fork and fly to Reykjavik, it’s worth noting that balancing a game as old and complex as EVE Online is far from trivial. Balance is a tricky optimisation problem that gets considerably more complex as new elements and variables are added, even moreso when those elements can interact with each other in emergent ways as they do in EVE PvP.

The same ships and modules have to be balanced for huge range of PvP and PvE activities across a wide range of scales, from small gang PvP to large-scale fleet warfare and solo PvE missions all the way up to running class 6 wormhole sites and incursions in organised groups. The task is complicated further by the fact that EVE players are absolutely amazing at finding optimal ship setups and strategies, and figuring out any viable counters to their enemy’s fits and strategies.

No matter how thoroughly a new balance change is tested before implementation, it has to pass through the gauntlet of player innovation on release and could have unintended consequences. There’s usually also a bit of a knowledge gap between the devs designing gameplay and the players who use it, hence why CCP collects feedback through the forums, runs ideas by the CSM, and tests ideas out on the test server before they go live. 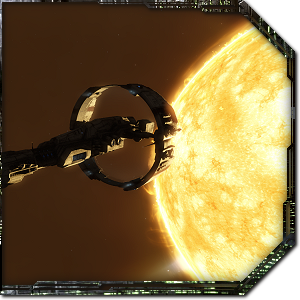 The case for rapid iteration

If you play EVE for long enough, you’ll realise that not many new features survive contact with the playerbase totally intact. It’s often difficult to predict how players will use a new feature and how it will interact with the existing gameplay, so issues can emerge anywhere from immediately after a patch to several months down the road.

A classic example would be the rewards and system capture balance problems from 2008’s Faction Warfare introduction that took over a year to get attention, or the Svipul dominating small gang PvP for over a year while the Hecate and Jackdaw sat spinning in people’s hangars. There’s a strong case to be made that CCP needs to react to these issues much more rapidly when they emerge, even if only through regular micro-balancing.

Other competitive online games such as MOBAs and hero shooters perform frequent small tweaks to keep every character a viable choice in as many situations as possible, increasing a stat by a tiny amount or decreasing the damage of a weapon by a few points. Not every balance change has to be a big systemic overhaul that will last for years to come, some of it can be rapid micro-iterations trialled on the test server briefly and then rolled out to the main server to address specific imbalances. 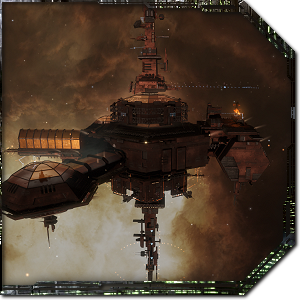 Is rapid iteration even feasible?

The idea of more frequent but smaller balance tweaks has been brought up several times by the CSM, but some legitimate issues with it have been raised. Frequently changing ship module layouts and fitting stats can be pretty disruptive, for example, forcing people to figure out new ship fittings and rendering many old guides obsolete.

CCP Mannbjörn highlighted that 2015’s series of rapid iterations throughout its ten major releases didn’t give much time for things to settle. I personally noticed the same when writing ship fitting guides that went obsolete within a year. Regular balance tweaks would probably have to be limited to direct stats and ship bonuses rather than fittings if they’re to be minimally disruptive, and that’s hardly ideal.

Player Capri Sun Kraftfoods recently suggested that virtually any balance outcome should be achievable by simply changing a few database entries, hinting that the workload for implementing balance changes once agreed on should be very small. CCP Seagull contended during one CSM summit, however, that balance changes can actually be very difficult to scope and the amount of work required varies greatly from one problem to the next. Developers also pointed out at the second CSM 11 Summit that they have to wait long enough after each change to see what the actual impact is, which itself can take months. 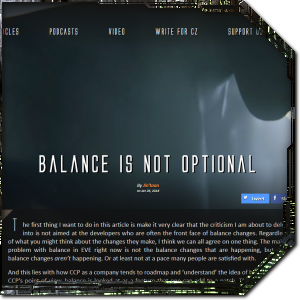 CSM member Jin’taan has been a strong proponent of CCP creating a dedicated balance team, or at least a single developer responsible only for balance changes. In his recent article “Balance is not optional,” Jin’taan suggests that CCP sees balance changes as features that have to compete for limited dev time, making it easy for balance issues to end up on the backburner.

CCP wants each of its gameplay teams to be responsible for balance in the features they’re working on, but those teams reportedly often don’t have the development bandwidth to implement solutions to problems even after agreeing on a solution with the CSM. A general balance team should theoretically be able to pick up some of those issues, leading to faster resolutions.

CCP Seagull promised to dedicate a team to ship and module balance in her July 2017 Development Update video, but devs later clarified that an existing group named Team Size Matters would be shifting priorities toward balance in addition to other development responsibilities. Despite not being the fully dedicated balance team that some players expected, Team Size Matters was able to make some positive changes very quickly with a full balance pass on tech 1 frigates, destroyers, and cruisers released as part of the Lifeblood expansion.

Balancing a game like EVE Online is a monumental task, but one that absolutely can’t be put on the backburner. When a few overpowered ships begin to dominate lowsec and a small number of fleet doctrines make territorial warfare stale, it’s time for some tweaks. Team Size matters having time to dedicate to balance changes should hopefully make a real difference in the coming year, and it’s certainly positive to see the CSM pushing CCP heavily on balance issues.

It’ll be interesting to see what Team Size Matters comes up with over the next few months and how the conversation about balance between CCP and the players might evolve. CCP Larrikin’s suggestion of possibly releasing a monthly balance report with statistics to spark debate in the community could do a lot of good, for example, and I’d love to see micro-balance patches designed with minimal invasiveness in mind if possible. We hope to follow up on questions such as these when the latest CSM summit minutes are released and at EVE Fanfest 2018 this April.