I didn’t play it, but I can’t be the only one who thought of the original tabletop when Funcom announced Mutant Year Zero: Road to Eden. Well, if you haven’t heard yet, surprise! It’s based on the same IP.

However, I have some bad news, MMO fans: Apparently while there was a plan for Mutant Year Zero to have a multiplayer option, it got the axe. Good news, though: Developer and “First Lady” from The Bearded Ladies (the developers behind the game) David Skarin said nothing is stopping them from adding it in after launch. Normally CGI trailers without gameplay make the press side of me roll my eyes, but I have to admit that, after seeing some actual gameplay, I’d probably enjoy some hands-on time with the title. 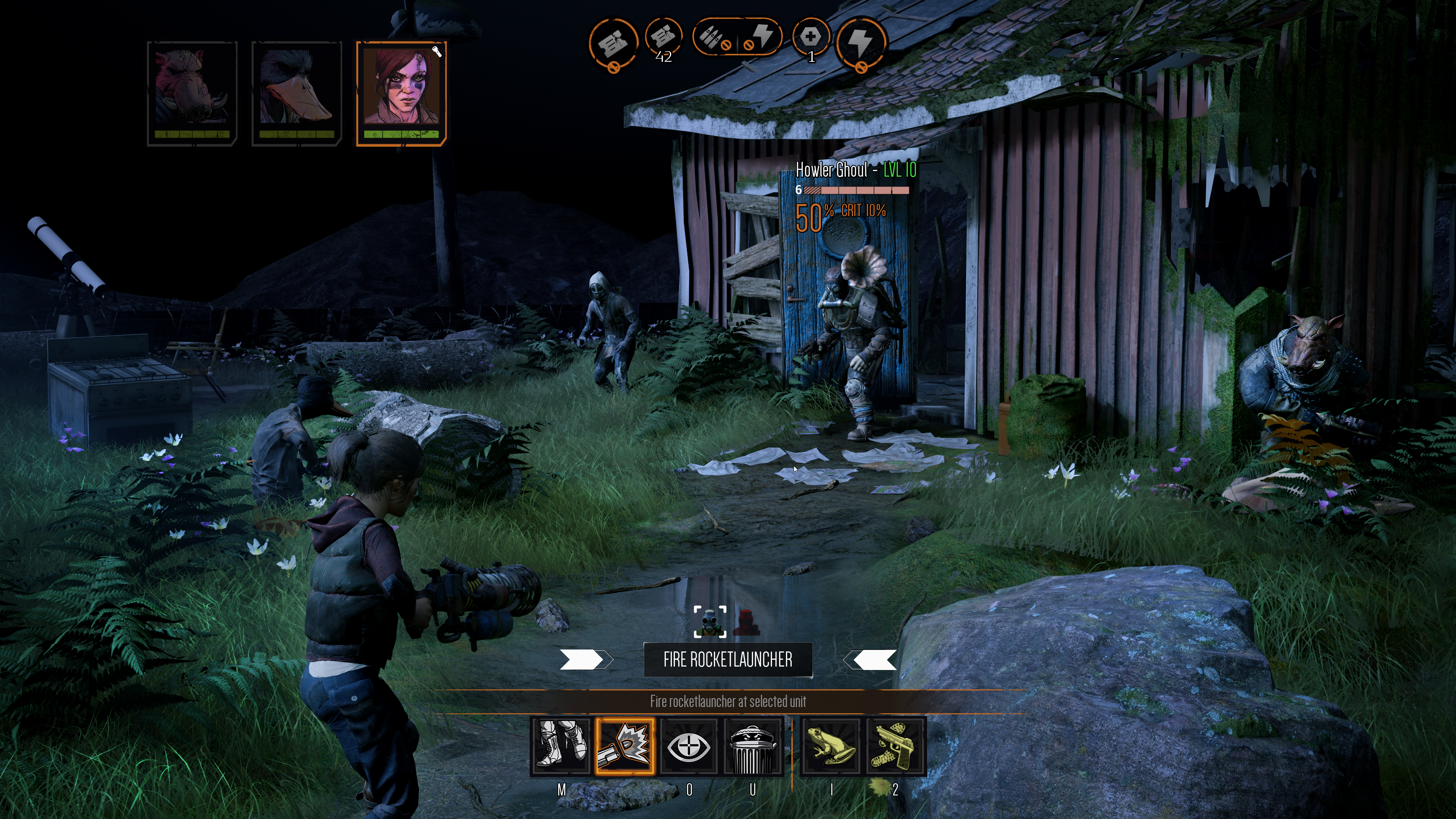 I’ve never played any Xcom games, but I’m told gameplay in Mutant is pretty similar, except it’s meant to be tighter with more variations. You control up to three mutant scavengers at a time while exploring and while moving into turn-based tactical combat (think Fire Emblem). I say up to three because there are supposedly many more “manimals” outside the trailer and demo I got to see at GDC. As they grow, you can give them new abilities, but you can also find mutations around the game world (and no, you won’t have to wait till end game to get the best ones) and switch them up as need be. Despite what science tells us, these mutations aren’t inherited at birth and can appear and disappear at will because, hey, that’s fun for gameplay.

That being said, the environment makes up for that with details of the apocalypse. Seeing electrical lights is a dead giveaway that you’re about to enter a rough area. What (little) remains of humanity (mutanity?) survives in the flying ark in the sky with the help of “The Elder,” supposedly the last living human who’s lived a bit longer than humans normally would. The ark citizens live and die based on what you can bring back: food, water, tech. It’s not a resource management game per se, and you’re not going to be choosing who eats or really customizing the ark so much as filling in the story, but the game is dripping with personality. Brutal, overly aggressive personality, but I have to admit, I enjoyed it.

The game is mostly combat related, which frustrates me since the most appealing thing to me about tabletop games is the freedom to do so, so much more. Video games do this a lot when taking tabletops to the virtual space, and as others have told me in the past, Skarin notes that you lose the social component when you make a video game. Local multiplayer, MMOs, VR, and AR have ways to handle it, but yes, combat is much easier to do, especially since you don’t have to worry about flying dice.

And that’s something the game does well beyond creating a rough, personality-filled atmosphere. Mutant abilities aren’t story-based one time decisions but equippables. You have a real-time mode where you run around and explore, and a turn-based tactical mode for combat. Stealth is handled with lots of visuals so you know where NPCs can hear/see you. Enemy units come in permanent sets, so although you can leave a map after killing three out of four guards, they’ll respawn unless you finish the last one, in which case they won’t be coming back.

You can split up your forces or move them together, and while we learned that there are lots more “manimals” to play with, you can use only three at a time. Skarin said that during development, five felt like too many, and the team realized you could do a lot of the same stuff with three as you could do four, so they went with the tighter feeling three.

Of course, you’ve got skill trees, trinkets to find (lots of cool things just for appearances’ sake), and some weighty choices. Do you hide your allies before battle, or go in guns blazing? Do you leave cover and risk death to kill your enemy before they get support, or try to get your other units to back you up first? Roll the dice! No, literally: You’ll see the percentage your action has of being successful before trying it and then, well, pray.

Exploring doesn’t give you just cool stuff but cool options. Maybe you find a ladder to high ground that gives you a damage bonus, or maybe you the doom device’s manual and figure out how to turn it against your enemy. There should be some slightly off the path discoverable for each major battle. 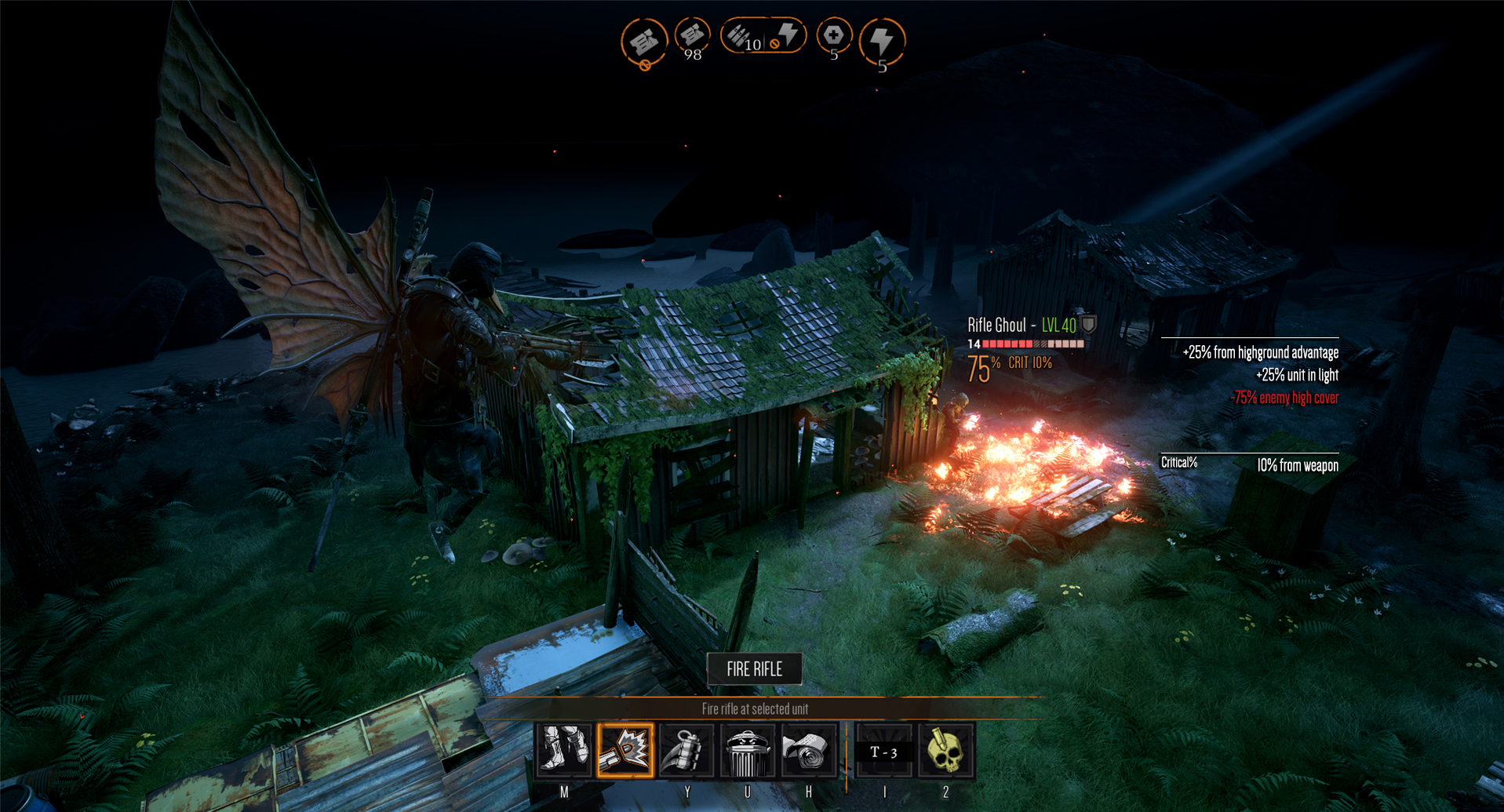 After the story and future chapters

Replay value is important if you’re not going to do multiplayer. Naturally, you can go back and explore to see what you’ve missed or maybe roll your character in a different way. However, Skarin mentions that, once you’ve completed the game’s story, you have access to permadeath and ironman modes for you masochists out there. This way, the developers don’t have to do so much hand-waving if a major story character dies.

That’s just the plans for release though. The team had other ideas that sadly have already been chopped, but Skarin is a big fan of the Mutant IP ever since he was a kid in the ’80s. For example, the tabletop setting always suggested to make scenarios take place in your hometown, so Skarin based the game on a town in Sweden that’s familiar to him and another designer. It’d be fun if players could do the same, maybe via modding and, of course, multiplayer. We’ll have to see what, if anything, the team adds to Mutant Year Zero: Road to Eden post-release.

Massively Overpowered was on the ground in San Francisco for GDC 2018, bringing you expert MMO coverage on everything (and everyone!) on display at the latest Game Developers Conference!
newest oldest most liked

Finally something to be hyped about. And from Funcom no less.

I don’t mind about no multiplayer, but the one thing that kind of turns me off with this despite loving X-com type games is that the character roster is the four shown in the art and that is it. No making your own mutants, no choosing from an ever expanding roster of interesting mutants i order to make your dream team..its just those four and that is it. :(

The article makes it sound like there are a bunch to choose from, but you can only have 3 on your team at a time.

There’s only 3 in that shot, but as I said in the article, there’s a lot more. There’s a reason the team added perma-death after your first playthrough. Can’t do that with a roster of 3! That being said, yeah, making your own mutants would be cool, but with mutations being equippable, depending on how many manimals we get at launch, you kind of can.

That is good to know Andrew, my bad for paying more attention to the video than your article sorry :(
The reference to four btw was in relation to the original teaser art they released that had four missing characters.

Torchlight III gives defense and shields a buff in the latest...

The Stream Team: Looking for SWTOR datacrons in Alderaan places

EVE Online details management of the sandbox ecosystem and explains the...