So you’ve probably heard some news about the Monster Hunter World port. PC performance issues, keyboard and mouse issues, random crashing. I wish I could tell you differently, but I can’t. No joke, MHW is one of those games I really wanted to see do well on PC and wanted to tell you all to go out and buy. I still argue the series is MMO action raiding boiled down into a tight, fun, formula filled with the treasure hunting you like and less of the downtime and dice rolls you hate, without so much of the synchronized combat dancing we see in the genre, but I have some serious reservations about this port.

Granted, Capcom has already made improvements during the media testing phase I participated in. It seems like the bug that caused the game to hard crash has been fixed in single player experiences, but the game’s somehow carried over some console oddities, and as PC media doesn’t seem as hyped as the console media was (I never found people to group with because so few were playing), I can’t talk about multiplayer.

I can, however, make some comparisons to the PS4 version I reviewed earlier this year.

One of the big accessibility issues I had with the console version of MHW was trying to play with others at the start of the game. Players have to view a cutscene in their storyline before they can allow other players to participate in their mission, even if the other players have already completed it. The cutscene can’t just be based on the host’s character and freeze everyone else is beyond me, but there it is.

Still, the PC version of the game hasn’t addressed this. It’s not a huge issue but a quality-of-life standard I would expect from any AAA game. I could try to excuse Capcom for being a Japanese game company that doesn’t do a lot of PC games, but other issues I’ll address later make me feel like the game might just be what many of us feared: a quick and dirty port.

Going online is still cumbersome. It’s not just about the game making it a bit hard for new hunters to join their friends, but the issues with connecting to public lobbies fails. It’s not just the “fail to connect” issue console players already saw, but literally yours truly trying to connect, walking away, eating a sandwich, coming back, and seeing that the game is still searching for a group. While I haven’t seen this issue since the latest patch, I also haven’t had as much time since that patch to hit the game. It could be solved, which would be a big kudos to Capcom, but I feel I should warn readers to look out for this in streams and reviews by others if they’re on the fence about purchasing the game.

While it’s not an issue in the PS4 version of the game, there were serious issues with the PC game crashing to desktop randomly. When basic gameplay involves 20-50 minute missions, and that progress can be lost in an instance for no good reason, it can be supremely demotivating.

In fact, this happened several times on the same level for me, which really held me up progress wise. The crashes really make the game’s session-based lobby roots show in the worst ways. Again, it’s important to note that I’ve played a few hours since Capcom patched, and that bug appears to be fixed. Kudos to Capcom for this, but again, I hate to reiterate that I haven’t done any multiplayer since the fix to see how stable the overall game is. I would strongly hesitate to purchase the game on day one if you aren’t already a core fan, especially if it turns out that the bug does affect online play.

I wish that were the end of my hesitations, but sadly, we need to discuss some other port-specific issues that are probably very important for Massively OP readers: mouse and keyboard controls. 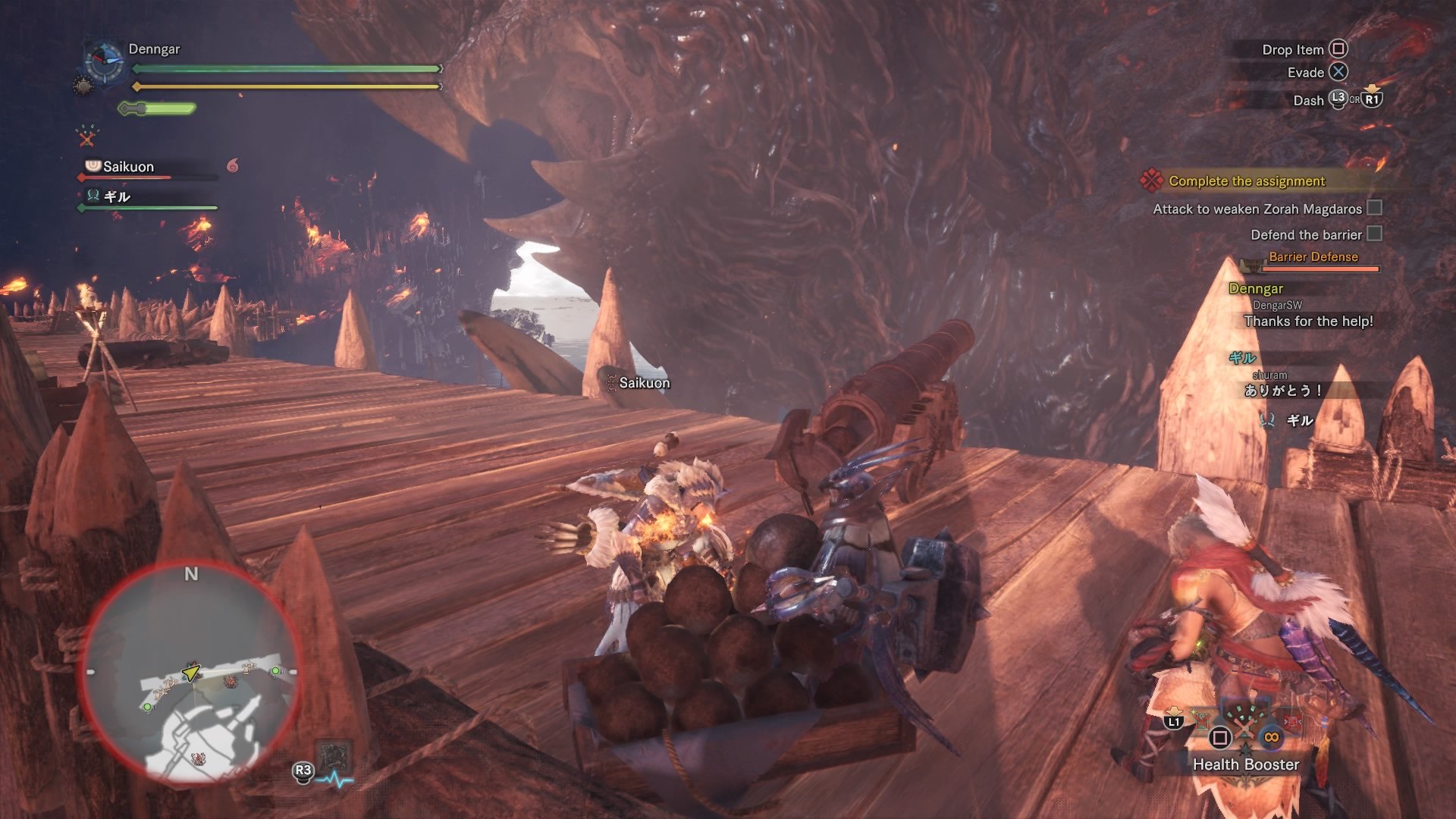 Rage against the keyboard

This is hard for me, so I’m doing this fast, bandaid-ripping style: The game plays better with an Xbox One Wireless controller than it does keyboard and mouse. Ouch. It’s not that I like the controller (I don’t); it’s that there are some very basic issues with how Capcom tried to make things work for us keyboard warriors. In essence, it feels as if Capcom took the basic console controls and allowed players to map them on their PCs. Even the basic UI plays as if it were adapted from the console version instead of made for the PC.
Mouse movement feels more like moving a joystick on a controller to navigate menus with. It’s slow and sluggish, and I couldn’t find a mouse sensitivity option to correct this. You can remap keys, but again, it seems to be adapted from the console version of the game instead of taking into account general PC usability. For example, the Cancel button can’t be the same as the menu button, even though in traditional PC games, we use ESC for both. In fact, ESC tends to be a cancel button in general, but not here, so even a non-PC gamer could be frustrated.

For core PC gamers, though, it gets worse. At the start of each mission, you have a box to get supplies from. Instead of using the E or even F keys to interact with objects like we do in, well, every modern game, you use right click to interact with it. I don’t mean clicking on the box itself, just being near it and hitting those buttons. This carries over into all world interaction, and while it can be remapped, there are other control issues.

As you have a ton of items to use, the game has a radius wheel on the controller to help you quickly go through your items to find the right one. Attempting to use it on PC, though, requires your character to stand still and do nothing for a few seconds. As every character is basically going to need to “tank” during a fight, standing still and not dodging (or for certain weapon classes, blocking) is a good way to die. Newbies, just know that three deaths between all party members spells mission failure. You can use the scroll wheel to get through items quickly, but it never feels reliable.

Keyboard and mouse weapon combos don’t have the same weight as they did on a controller. Perhaps it’s my timing, but the click of a mouse feels so easy compared to the weight of console controller button. I don’t use my Xbox controller much, and this was my first time doing it in any Monster Hunter game, but the controller on PC felt better than the mouse. Worse though is that you can’t creep as you could on a joystick with the WASD controls. In a game where you sometimes need to creep up on mobs or step in just the right spot to avoid damage and smash a monster in the face, the keyboard makes your hunter look like a real greenhorn.

I hate to continue complaining like this, especially about a series I love, but even in the communication department the game suffers. You can’t just press Enter to start text chatting with people. You need to go through menus to open that option. I understand that it’s an action-oriented game and that voice chat may theoretically preferable, but my experience in MHW on PlayStation 4 clearly suggests that people are not utilizing it. The PC’s major strength should be in having the keyboard built in for controls and communication. We do it all the time with other MMOs, but Capcom clearly didn’t do its homework.

In other words, if you’re determined to play PC at launch, it may be best to pick up a controller to hunt with and hope that Capcom has the time and money to do a UI rework for PC players. 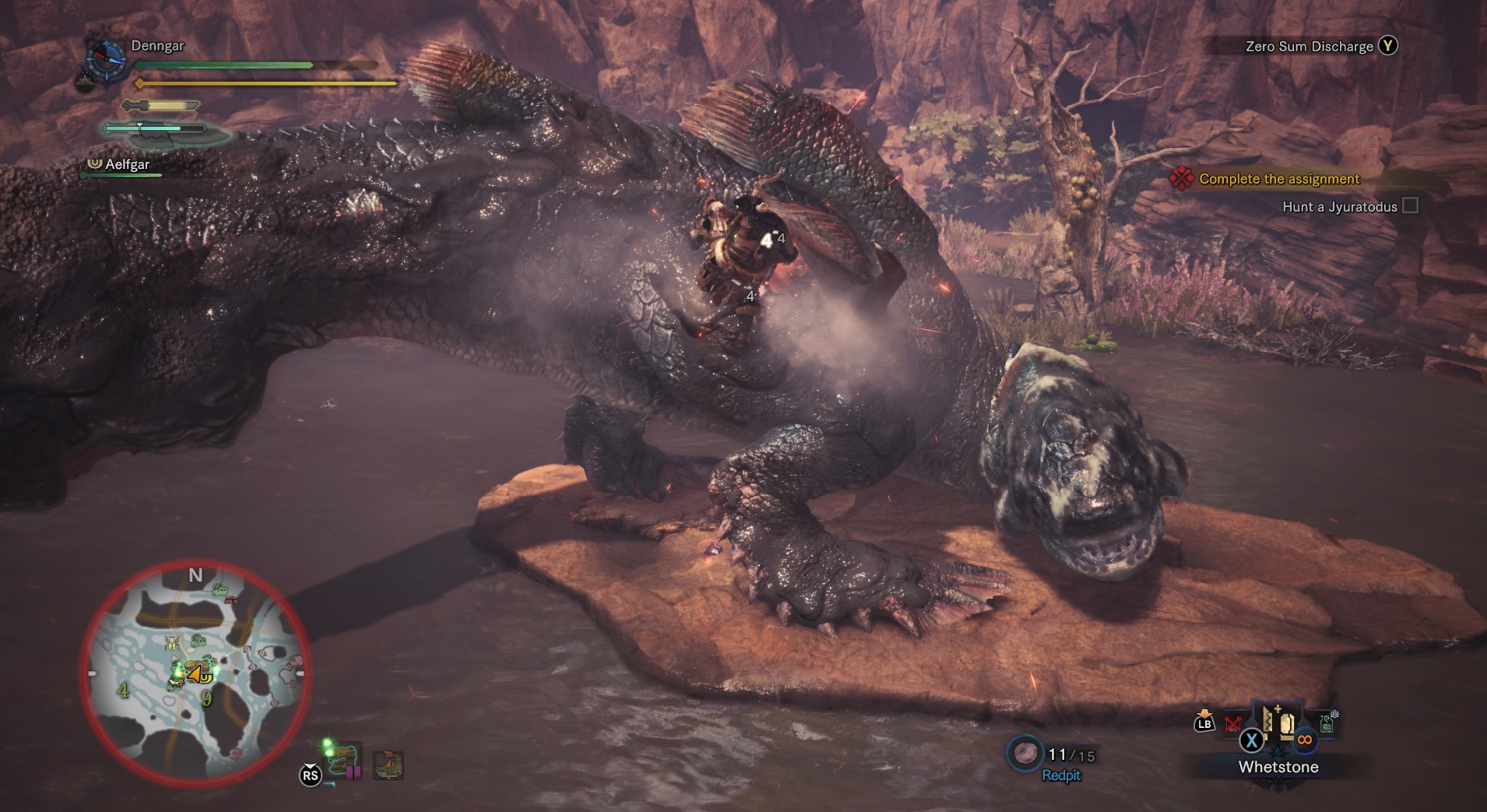 The light at the end of the tunnel

All this being said, if you’ve never played a Monster Hunter game, Monster Hunter World is going to be many PC gamers’ first opportunity to play the game outside of certain Asian countries. Especially for MMO players who like visceral combat, environmental immersion, tactical options, and low downtimes but plenty of behind-the-scenes stats to tinker with, the game retains all the hype-worthy praise it got on console for PC players willing to understand that the game is a port. Don’t try to push the visuals too hard, as the rumors of optimization issues are true. My gaming laptop can run VR fine but runs hot if I play MHW too long.

For those curious about MHW but without friends currently playing, I’d suggest waiting until you’ve seen or heard more about the game’s release state and community. While you can play the game alone and have fun, it truly shines in groups. Being able to barely dodge a monster headbutt and return it by breaking it face is cool, but it’s cooler when your friend follows that up by severing the beast’s tail.

I’ve gotten MMO raiding friends to jump into previous entries in the serious with great results, so if you’re experiencing any raid/MMO burnout, this could be a title to turn to. There’s no real deep story here, but fun mechanics that might not quite be ready for larger, more persistent game worlds. Assuming launch is as stable as what I’ve experienced recently, the game is mostly held back by high-end performance issues and a clunky mouse and keyboard UI. Playing with console-esque settings and a controller seems like the best way to play for now, and while I’d recommend the actual console versions instead at the moment, for PC purists, this is the only current option you have, and while it still needs some work, there’s still plenty of fun to be had.