If this PAX West 2018 was about one thing, it was about proving me wrong. I jumped into the Rend interview expecting a specific type of game. It’s a PvP survival game, so we have come to expect that it would be a gritty, dark, hardcore game, but when I saw it for the first time in action at demo, I was shocked at how it fun it looked. I don’t want to say that the game isn’t dark. I visited a couple of zones that were clearly dark – threatening, even. But the artists, specifically the environmental artists, found a way to give the game a vibrant feel, leaning toward cartoony. If I can use a DC comics universe an analogy: Rend is Teen Titans, not Teen Titans Go and definitely not Titans.

I was concerned that the aesthetic would actually turn people off from the game, and I asked Senior Game Designer Tyler Fuchs and Frostkeep Co-founder Solomon Lee what they thought about it and why this choice was good for them. Here’s what Lee told me:

How has Frostkeep Studios used this playground that no one else has, and does it actually stand out from the crowd? That’s what I intended to find out.

Standing out from the crowd

Before my appointment with Frostkeep, I was visiting a booth exhibiting more of a tween type of MMO. It was full of chibi characters and cute, cuddly minigames. And as my Editor-in-Chief Bree and I noted, after that we expected Rend was going to be a shocking contrast. However, as I was taken from place to place in the Norse-inspired land of Rend, there was surprising less contrast than I thought there would be.

Director of Communications Michele Cagle joined us at the table in the Sheraton Inn conference room where we were exploring Rend and said, “It’s about making this world come alive in their own style and way.” But Fuchs was quick to point out that the game was “still a survival game,” so “a big happy cuddly thing doesn’t belong. If it’s going to kill you, that’s the wrong visual for that thing.”

The team playfully referred to the land of Rend as the giant Dorito. That’s not a bad description of it. Since we were looking at a development build of the game, Lee was able to hop out of the standard camera, third-person view and give us an extreme overview of the world. As he panned out, the “Dorito” took shape. The corners lay flat with the edges taking on a wavy shape. The middle started to get rougher a few kilometers in with very mountainous terrain taking up most of the middle area. And at the very center: a giant tree that was visible just about everywhere in the world. 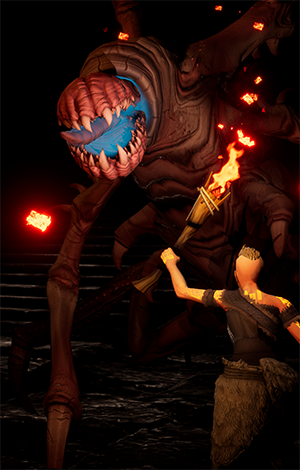 There is no mistaking that Rend is a survival game. Everything that your typical survival game has, Rend has too. Resource gathering, crafting, base building, giant boss monsters, and of course, PvP. However, Rend stands out in a few different ways. The first being its faction-based PvP.

In the standard game, you are asked pick one of three factions before joining. All factions are made equal and essentially have nothing to start with. However, as you build your base, kill other players, and complete objectives, you will gather spirits that will earn you points toward the endgame. However, the best way to gather spirits is by defending control points scattered throughout the map and stealing spirits from enemy factions’ Divinity Stones, which sit in the center of the player bases.

It’s very StarCraftian, except that you control just the one character. You have to rely on the 19 other people in your faction to help you build the Divinity Stone defense and counter-offensives. And to do that, you have to gather resources to better your character, but Rend doesn’t make that easy, either. Fuchs talked about some of the variations on resource gathering as we explored the world:

“Resource gathering in survival games is not the most thrilling of gameplay activities, in general, so we try to mix it up when we can be adding gameplay hooks to it. Here we also have this giant spider egg sacks, which is a great source of silk to craft silk armor, but when you crack them open there is a chance that a bunch of spiderlings will pop out and attack you.”

There are other ways to gain an advantage over other players and factions. For instance, periodically a treasure chest will fall from the sky. Of course, there is a giant beam of light that shoots from the ground to indicate where this “boon from the gods” is, so needless to say, these will always be highly coveted. They contain artifacts, like Thor’s hammer or the Steed of Odin, which can easily turn the tide of battle or the tide of crafting. 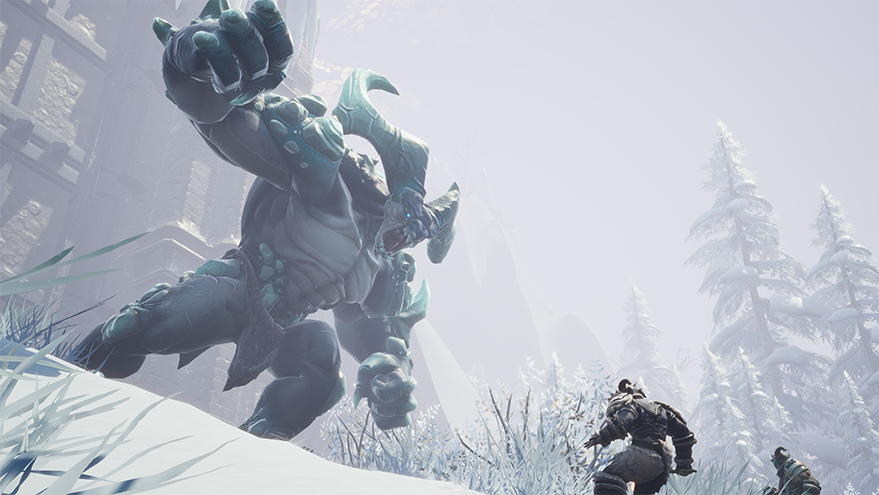 As it was explained to me at the meeting: Ragnarok has happened, and the land we live in is Midgard. And if anyone has paid any attention to the Marvel Cinematic Universe, then you know that Midgard is Earth. Yes, that means, Earth has been destroyed and looks nothing like it once did. And frankly, neither does Asgard; it can be seen floating in pieces hovering high above the Earth. So it’s post-apocalyptic, but the apocalypse was Ragnarok, but not nearly as funny as the movie of the same name starring Chris Hemsworth (the greatest of the MCU Chrises — disagree in the comments below).

Most of the known gods are either dead or missing (poor Chris), which means that nothing is recognizable. In the standard game mode, the goal is to fill our sigil on the giant tree in the middle of the map with spirits. When we have reached the top, we can ascend to Valhalla and godhood.

How it’s all put together

Fuchs told me that there are 17 people working on Rend, which sounds insanely small to me. But having a small team returns some benefits, too, according to Fuchs.

“We all worked at big studios. We’ve worked at Blizzard and Carbine. We’ve been through that bureaucracy and red tape. ‘No, this is what we are doing. This is the plan.’ And for a big studio of 200 people, it makes a lot of sense. It’s really hard to course correct. For us, that’s part of our strength, and its why we like working in a team [of 17 people]. We can go, ‘That’s more important. Let’s drop what we’re doing and fix that.’ It buys us credibility with the players.”

That being said, do look for the early access roadmap to drop sometime this week. And based on the conversation that I had with them, I’ll give you a few hints of things that might appear on that roadmap: Nidavellir Dwarven mines with a strong PvE focus, “Explorer” PvE only server mode, a classic survival mode for servers, and new creatures like the Jotunn frost giant and the Nidavellir Creep.

I like what I see coming out of Frostkeep Studios. Rend appears to have many things that we expect in a survival game and many things that will set it apart from the rest of the genre that seems to be soaking up more and more of my game time. It’s currently in Early Access, so I will be playing it as soon as I can, and if you’re into survival games — or maybe you thought about trying them out but just haven’t yet — then Rend would probably be a good one to jump into.