There are a lot of people excited to play Viera and Hrothgar in Final Fantasy XIV: Shadowbringers. There are also a lot of people unhappy that doing so requires you to play a lady or a man, respectively, as the races are both gender-locked to the consternation of fans. The good news? Producer and director Naoki Yoshida is not saying that the other genders will never happen, as he has specifically stated that the developers will consider fan feedback and can add male Viera and female Hrothgar in the future.

END_OF_DOCUMENT_TOKEN_TO_BE_REPLACED
Did the team not expect this feedback? Another interview explains that it’s a bit more complicated than that; the team knew that players dearly wanted Viera in the game, but there was also a desire to have a more beastly sort of race design. As a result, it’s less that male Hrothgar replaced male Viera and more that female Viera replaced female Ronso. That won’t take the sting off of having to wait for the other gender to be added, but if the feedback is there, it seems likely they’ll be along in the future.
Source: Gamespot, Reddit

How about they just don’t be cowards and release big buff Hrothgar women and lithe pretty Viera boys?

I’m glad that Yoshi-P acknowledged they need to re-think how they release information (i.e. Fan Fest). All of this…drama…could have been avoided if at the EU Fan Fest they simply stated that Viera is going to be female only, but look for a surprise at the JP Fan Fest. Nice and simple. It’s innocently done and in jest, but sometimes taking the piss with your fans can backfire–as we’ve seen on full display at the JP Fan Fest.

Anyway, give it another week or two and the drama will blow over.

I mean, if they cared about feedback – they could’ve just added a poll on official site or the launcher ;-)

Honestly i feel bad for him. For every person upset they weren’t getting those male viera from that concept art i saw a few dozen going nuclear and sending death threats on twitter because their alphinaux with bunny ears twink fetish fuel wasn’t being added in. It was shameless and cringe as hell. Its no different than the meatheads back in the day that wouldn’t play tomb raider “because its gay to play as a bird innut blud?” with a layer of “let me create my jerk off dress up doll” on top for that really strong one two punch of “thirstier than a dying man in the sahara”.

Sending death threat for anything is inexcusable. I hope Yoshi looks at actual fan feedback and not the ex-Tumblr fetishists.

If they decide to add the other genders in eventually, that’s enough for me. But tbh, no matter if we got viera or hrothgar, I’d rather have -one- new race with both genders available than have 1 of each.

I personally hope that they don’t. I’ve always loved the fact that some races have restrictions in MMOs. We have so many races now that have both f/m options, having some gender locked is no problem for me at all.

I’d rather have two new unique races than just one with two genders at this point in the game.

“Did the team not expect this feedback?”

“…the team knew that players dearly wanted Viera in the game, but there was also a desire to have a more beastly sort of race design. As a result, it’s less that male Hrothgar replaced male Viera and more that female Viera replaced female Ronso.”

…they really should take a look at how ANet dealt with the Charr design for GW2. As they really don’t need to stick bewbs on something to make it look female. Just saying.

Hrothgar are based on ronso visually, and female ronso already exist. So I wouldn’t expect them to deviate much from that visually.

Yeah they do exist, so it’s just a matter of putting them in the game rather than designing them or anything :D 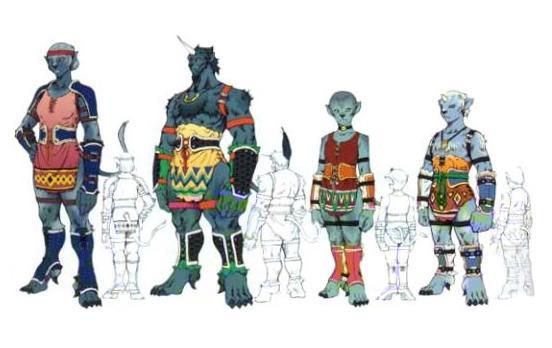 From what I understood, the issue isn’t that it wouldn’t be feasible to make female Hrothgar, but instead that they only had the budget for two customizable body models, which is what it takes at minimum to make one race with both male and female characters. To satisfy as many players as possible they decided to instead split the budget between two races; rather than making two body models (male and female) for the Hrothgar race, Square made one Hrothgar model (the male) and one Viera model (the female).

That’s what I’ve been seeing around too… Though it sounds like it might be biting them in the butt because rather than one race where the adjustments would be largely uniform… they’ve made more work for themselves and have to readjust armor for two body types rather than one. Hence why anything aside from a visual replacement is disabled for the headslot for Ronso and Viera.

I remember seeing something that the Viera models were barely finished in time for the Paris fan festival announcement, and it feels that way with the Ronso race too.

I wuv my no chested female Charr :D They’re still very feminine and all.

Though as the reply says below as far as Ronso go there are female versions already in the design so they just have to put them in the game rather than make them up.

No male Viera has been seen but the image of what they look like you can guess pretty easily by looking at the females (slender feminine bunny males).

It also wouldn’t be hard to design the female Hrothgar, especially since they’re a parallel world counterpart to the Ronso. It doesn’t really have to do with breasts :P

I’m not saying putting them in the game isn’t costly and all, just that the designs aren’t what is stopping them. The designs are either already existing or in mind already.

Concept art for Viera has existed since Heavensward (when they were initially considered to be added in).

This is Japan we are talking about: they put boobs on everything.

Rumor: Lord of the Rings Online’s next class might be the...