Between the disappointment of the current World of Warcraft expansion, the abandonment of Diablo III, and other… unpleasantness, I find my lifelong fandom of Blizzard Entertainment games at an all-time low.

But though I no longer feel particularly proud to support Blizzard games, there’s one thing that keeps me crawling back time and again. That is StarCraft II, and especially its co-op mode. Despite a relative lack of recognition in the greater community, SC2 co-op has quietly and consistently proven itself some of the best fun you can have in online gaming, and with last week’s release of another new commander, that’s more true than ever.

First of all, let’s acknowledge that StarCraft II is one of the greatest jewels in Blizzard’s crown. It’s one of the most competitive esports around, and its campaign ultimately boasted nearly a hundred missions featuring exquisite story-telling and some of the most inventive level design of any game I’ve ever played.

But it’s the co-op mode introduced in Legacy of the Void that’s kept me logging in at least once a week — and sometimes daily — for the last three and a half years.

Originally called Allied Commanders prior to its launch, co-op mode utilizes objective-based missions similar to those of the single-player campaign — indeed, many co-op missions are direct adaptations of campaign levels. But of course, in this case it’s not one person against the AI, but a team of two.

The other big thing that makes co-op different from the other game modes of SC2 is the choice of commanders. Commanders are the playable characters of co-op, each with his or her own tech tree, powers, and variant on a racial playstyle. 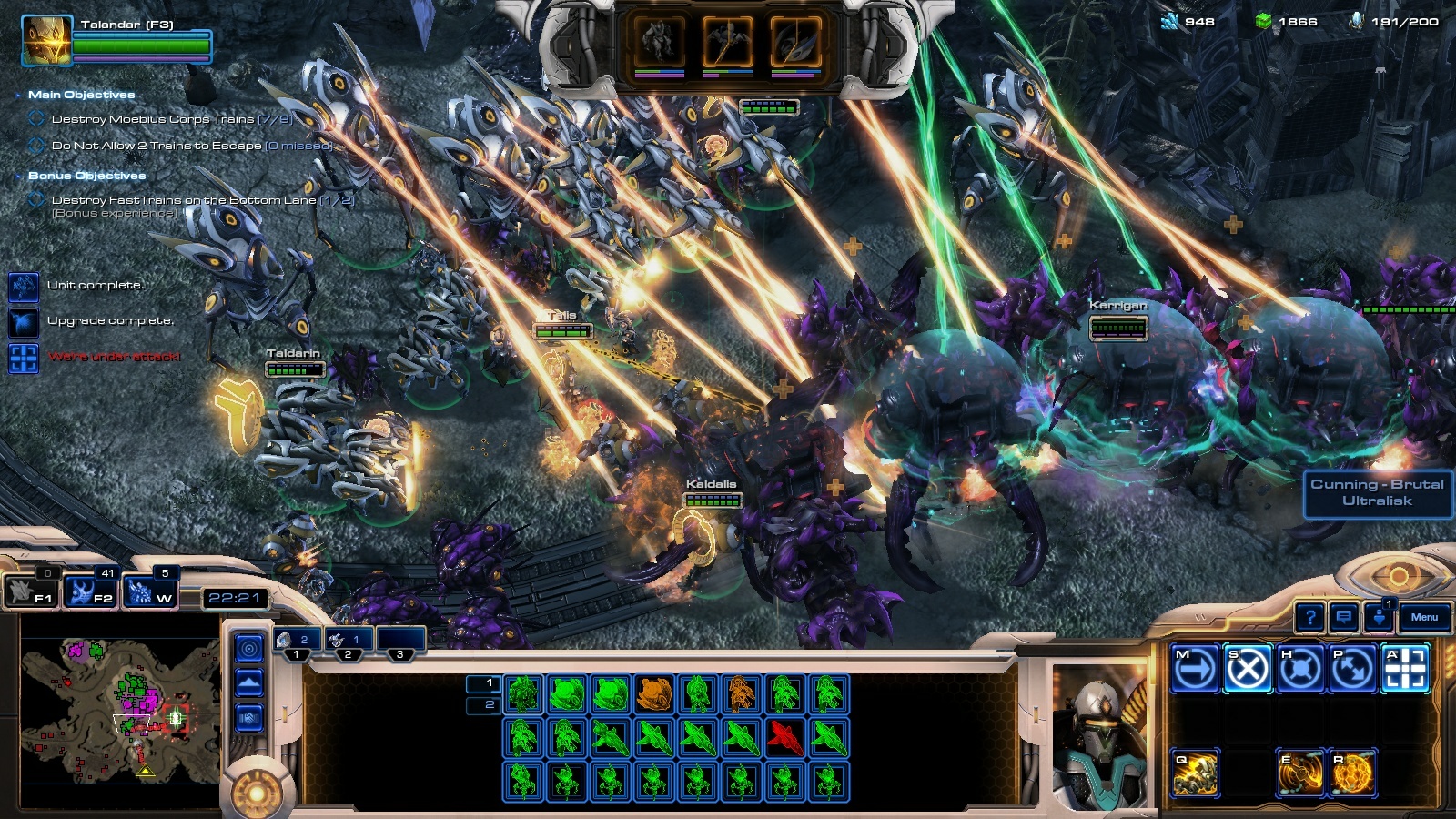 If you ever played Age of Mythology back in the day, it’s similar to how two players of the same civilization could end up having different playstyles based on which gods they worship, but in SC2, the difference is even more dramatic. Nova and Raynor may be both be Terran commanders, but they are radically different to play.

This has only become more true with time as new commanders have been added since launch. The original six commanders — Artanis and Vorazun for Protoss, Raynor and Swann for Terran, and Kerrigan and Zagara for Zerg — provided minor tweaks to their respective races, but were still fairly close to the standard mechanics you’d expect from campaign or ladder play.

Some of the post-launch commanders, though, are far more exotic, to the point where some of them feel like playing an entirely different game altogether.

The first commander released after launch, Karax, can and often does make it through matches while using little to no combat units. He relies heavily on global calldown abilities and defensive structures. In essence, he turns StarCraft II into a tower defense game.

One could also point to Stukov, who overwhelms his enemies with hundreds upon hundreds of infested, effectively unleashing the zombie apocalypse on his enemies. Or consider Dehaka the Primal Zerg, who incorporates a hero who levels up throughout the match in a manner reminiscent of Warcraft III.

My personal favourite commander is Nova. Aside from the fact she’s one of my all-time favourite characters from all of fiction, her playstyle clicks perfectly for me. Nova eschews almost all of the economic management you normally see in SC2. Instead, she focuses on micro, as you command a small force of extremely powerful elite units. 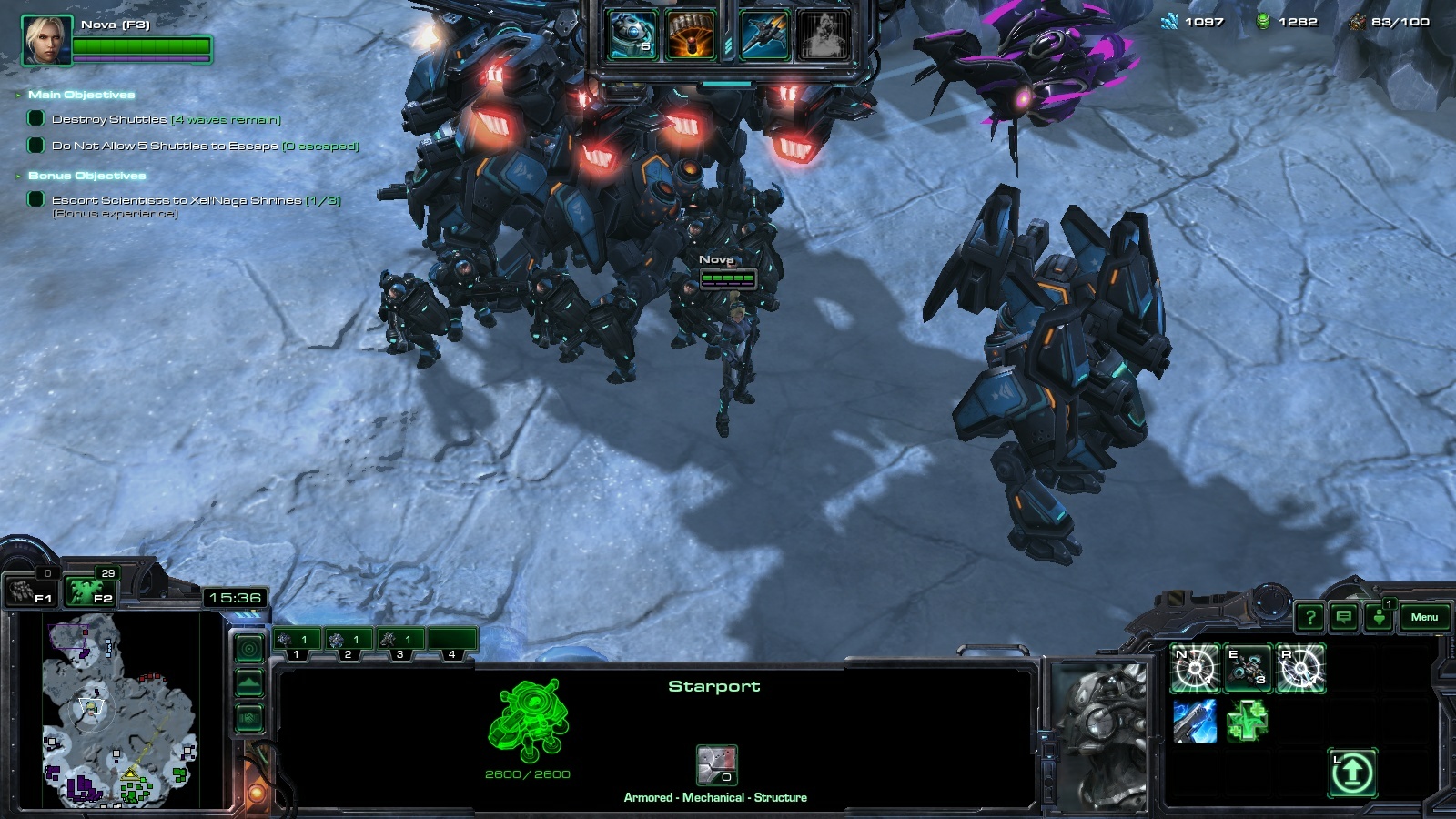 Like a MOBA, the variety of commanders and their playstyles — and the fact new ones are still being released — adds tremendous variety and replay value to co-op.

Further adding to the diversity of the experience is the randomization of the enemies you face. Not only does each co-op mission randomize which race you’re pitted against, it also chooses from many different potential strategies within that race. A Terran AI may try to overwhelm you with infantry on one map, and then hammer you with Battlecruisers on the next.

I was a bit worried for a while there that the co-op team was running out of ideas. We had two commanders in a row — Tychus and Zeratul — whose playstyle could best be described as “Nova, but simpler and somehow even more overpowered.”

However, last week we got a new commander release out of the blue: eccentric scientist Egon Stetmann. Unlike Tychus and Zeratul, Stetmann really does feel fresh, and it renews my faith in the co-op team a bit. Despite being a Terran character, Stetmann is a Zerg commander, leading a “Mecha Swarm” of robotic drones based on Zerg strains, all of them enhanced by Terran and Protoss technology.

His most unique feature is likely his “Stetellites,” which project power fields onto the map that provide constant buffs to Stetmann and his ally. You can toggle between several different buffs at will depending on what the situation needs. It’s a bit like traditional Zerg creep spread, but far more powerful and with more tactical decision-making. 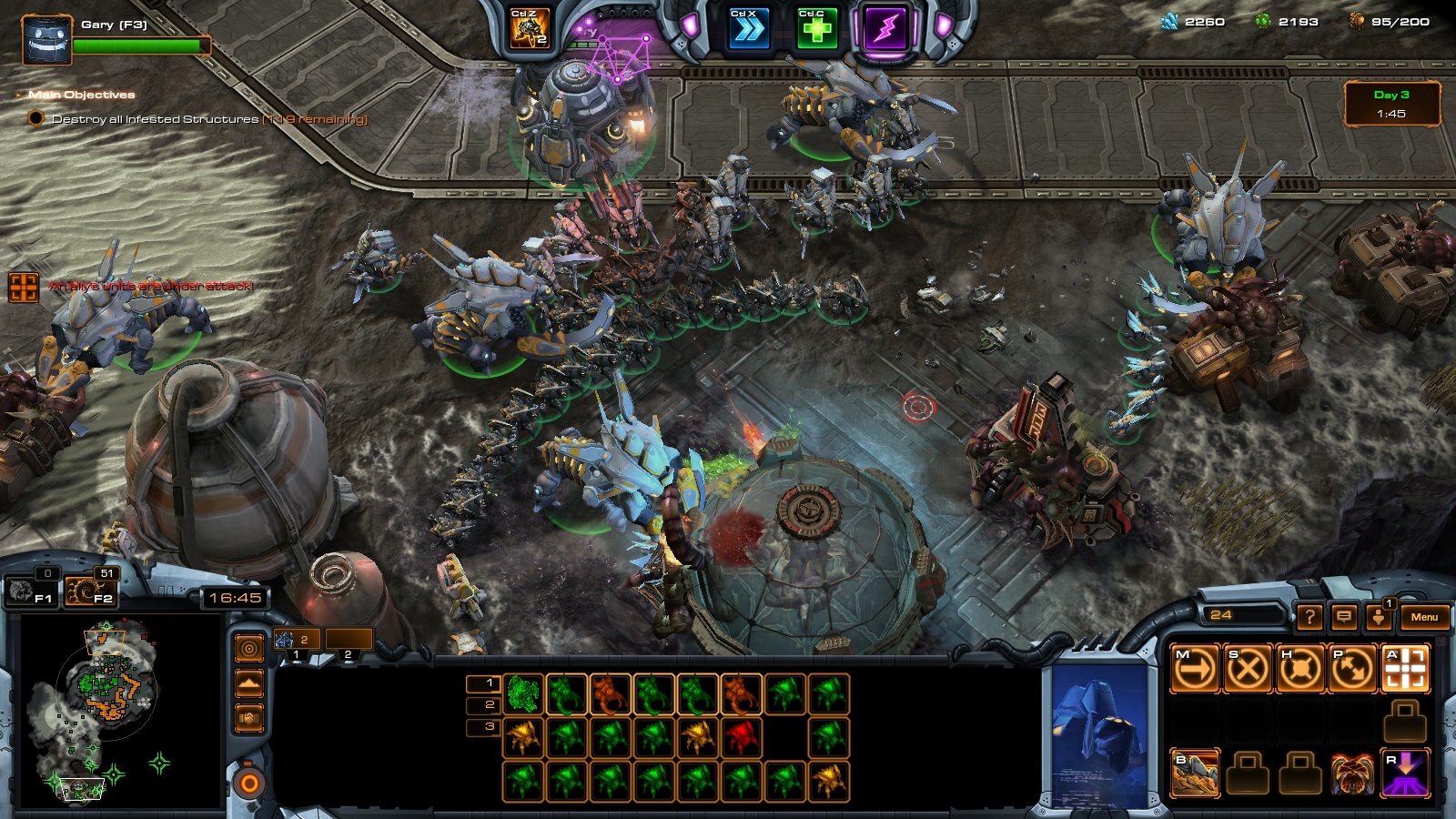 Stetmann’s units also all have energy — or “Egonergy” — to fuel extra abilities, and this energy can be recharged only by a Stetellite field. (While I suspect this is coincidence, my ego demands I mention this is virtually identical to an idea I pitched for a Talandar commander concept several years ago.)

For all my praise, I won’t pretend co-op is perfect. While Stetmann proves development has not ended, the pace of content updates has slowed to a crawl this long past launch.

When it first launched, I had hoped that co-op might be a way to further deepen the lore. The missions may not be terribly narrative driven, but their nominal connection to the story of Legacy of the Void did present the opportunity to learn more about things that happened off camera during the End War.

Alas, that never really came to pass, and with the addition of Tychus and Zeratul — characters who are dead during the time co-op is meant to take place — co-op has been quite decisively de-canonized and reduced to little more than a goofy playground for mindless killing.

I mean, I like mindless killing, don’t get me wrong. But it could have been more.

Co-op’s biggest issue, though, is power creep. Most of the post-launch commanders have been far stronger than the originals, and it’s just gotten worse and worse. Abathur was considered wildly OP at launch, but after Nova and Stukov, people began demanding buffs for him because he now seemed so weak by comparison.

And the worst part is Blizzard listened. Rather than nerfing the outliers, the studio started buffing everyone to the same game-breaking level of power. These days there’s virtually no challenge left in co-op at all. 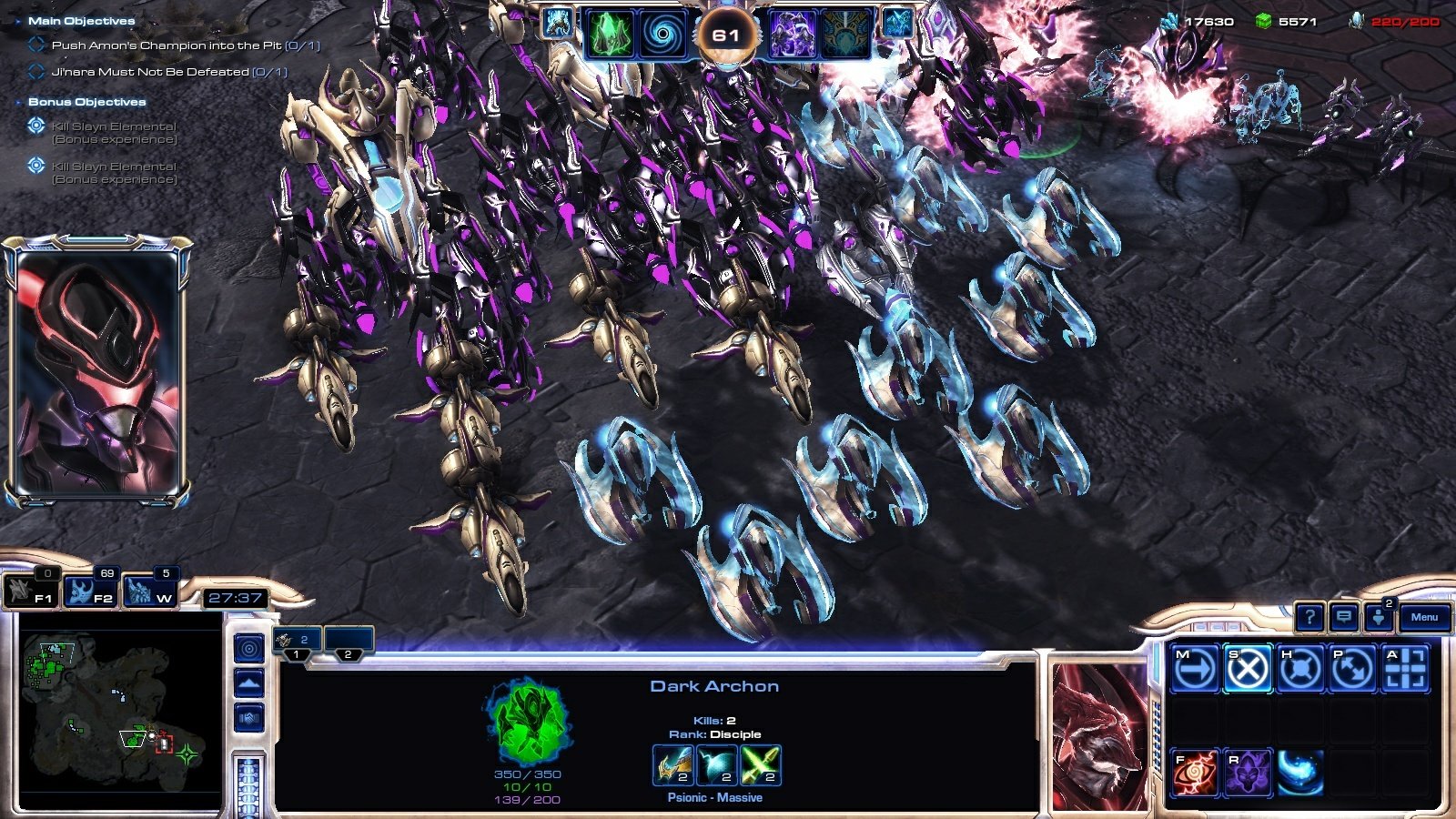 Let me tell you, you may think nerfs are unnecessary in a non-competitive mode. You may think balance through equal OPness is a good strategy. I did too until I saw it in action. But I promise you, SC2 co-op will make you understand why things get nerfed in games.

That said, I’m speaking as an experienced player. I’ve maxed my mastery points, and I know the maps like the back of my hand. I’m sure less experienced players don’t suffer as much from the power creep. And I still manage to have fun, even if it does feel like I’m abusing cheat codes sometimes, so power creep hasn’t yet broken co-op entirely.

Given recent events, I feel conflicted about recommending Blizzard games, but I also can’t deny the incredible talent and effort that’s gone into SC2 co-op. If you’ve never played it, you’re missing out.