A new expansion is on the way for Final Fantasy XIV, with early access starting up in less than a month. But what if you could take a peek at the future now? Good news! You can: The embargo on the 2019 media tour has come to an end, and that means that I can share with you all of the nifty stuff I saw in San Francisco just about a week ago.

END_OF_DOCUMENT_TOKEN_TO_BE_REPLACED

And that sharing takes the form of a whole lot of articles we’ll be doling out over the course of this morning, so you’ve got plenty of stuff to read and study before the expansion actually arrives on June 28th. (At least, for those who pre-ordered, otherwise you’re waiting until July 2nd. As you do.) Posts will populate the list below as they go live!
OUR FFXIV SHADOWBRINGERS MEDIA EVENT COVERAGE

For the Stormblood media tour, I mentioned how my trips to San Francisco are invariably tied to FFXIV, and this particular trip is no exception. It’s just, you know, a little more expected since I’ve done this once before. That doesn’t mean that I didn’t have plenty to see and be surprised by, though; knowing the shape of a thing is not the same as actually knowing the thing itself. 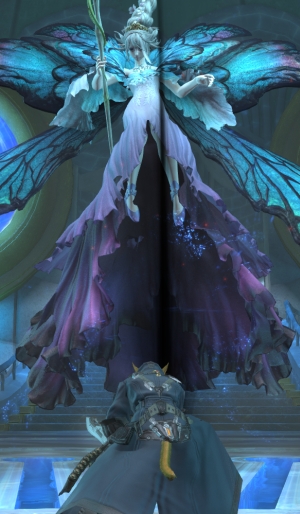 For this particular preview, we were limited to the regions of Il Mheg and Lakeland along with the Crystarium and the dungeon of Doh Mheg. Interestingly enough, neither Il Mheg nor Lakeland had any restrictions on where we roamed, nor did either one have a spread of level ranges across it; it’s possible that instead of our usual “choose your starting area” routine we’re being funneled into a single area this time around. That’s speculation, of course. All of the combat jobs were on display, however.

Everything on display on the ground is, of course, still subject to changing before the final release. Numbers can get tweaked, levels can get tweaked, mechanics can change, and so forth. This seems especially relevant when it comes to things like specific tooltips; don’t freak out because a tooltip reads as if it has an unusually low potency or something. While I can’t say this with certainty, I’m pretty sure the actual tooltips are among the last things that the developers finish up.

You will also see the fact repeated in our disclosures that Square-Enix provided travel and lodging for this event, because it did provide both and you know we do love our full disclosures. Please internalize this deep wisdom while also internalizing that this has about zero impact on my impression of what I saw. Those of you who pay attention to our FFXIV coverage know that I was excited about this expansion before, I’m excited now, and I have clear reasons for both.

I would also caution readers that some of this stuff may, in the broadest sense, be seen as spoilers. If you are hopelessly dedicated to the idea of knowing nothing about the expansion before you sit down to play it with the launch of early access, you can consider yourself fairly warned about potential spoiler-adjacent stuff.

With that in mind, let’s dive into the first piece. We’ve got jobs to examine and all sorts of new areas to see.