I don’t have any particular attachment to Conan the Barbarian as a franchise. I’m barely even familiar with it, in fact. But I do love me some RTS action, and I think co-op RTS is an under-served niche, so that was enough to get Conan Unconquered on my radar. And with the aid of a key kindly provided by Funcom, I was able to take the game for a spin prior to today’s launch.

In some ways Conan Unconquered can be a fairly complex game. The tech tree is pretty deep, and there seem to be a lot of potential builds and strategies you could use.

In other ways, it’s very simple. You only do one thing in this game: Defend your base against waves of increasingly difficult enemies.

During the brief windows between waves, you can build up (or more likely rebuild) your base or explore the map. There are camps of hostile monsters you can slay to earn extra resources, though I never found the resources earned from exploration made much of a difference.

There really isn’t much to the game beyond that core defense gameplay. There’s a very basic campaign, but it doesn’t really have any story beyond some bare flavor text on the mission select screen.

There’s not even a tutorial. You’re just given some basic pop-up hints at the start of the game, and then you’re thrown into the deep end and expected to swim. That’s pretty typical of this game: It was clearly built to challenge you, to push you to your limit. 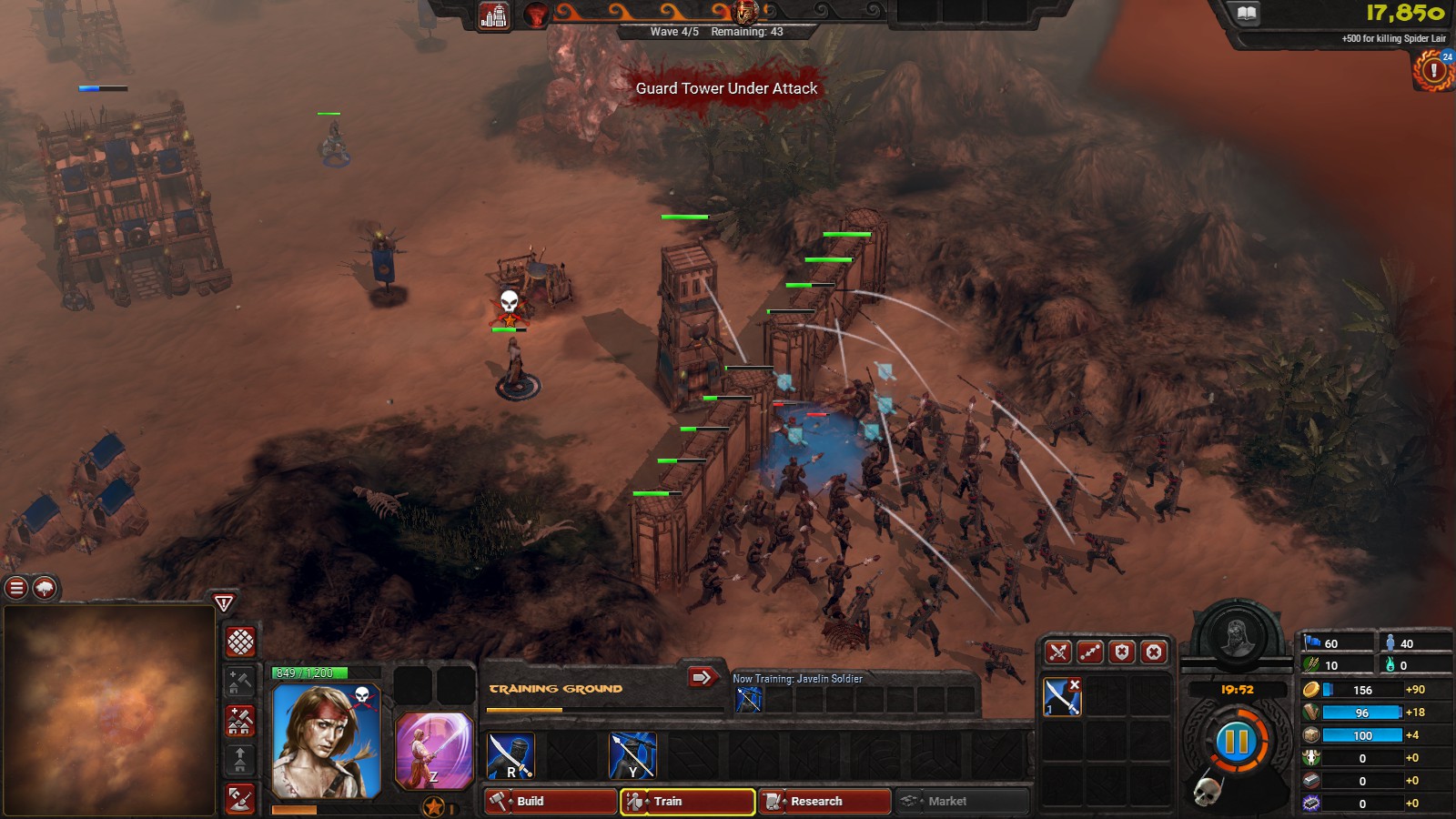 Before we go further, I want to say that I consider myself an experienced and skilled RTS player. Out of all of gaming, it is the genre where I most crave a challenge; I like to push my limits in strategy games. I won’t pretend to be GSL level or anything, but I have beaten all three main StarCraft II campaigns on the highest setting, and I’ve soloed brutal mutations in SC2 co-op. I’m no slouch.

So when I say that I found this game challenging to the point of exhaustion, I hope you understand that it means something. It’s not just that’s it difficult. It’s the way in which it’s difficult. Every single aspect of this game seems to have been designed to be as punishing as possible.

This is true even of the economy. In fact, the economy might just be the most punishing aspect of the game. It’s a complicated web of different resources that have been built with a painful degree of interdependency. You need food to earn gold, and you need gold to get food. 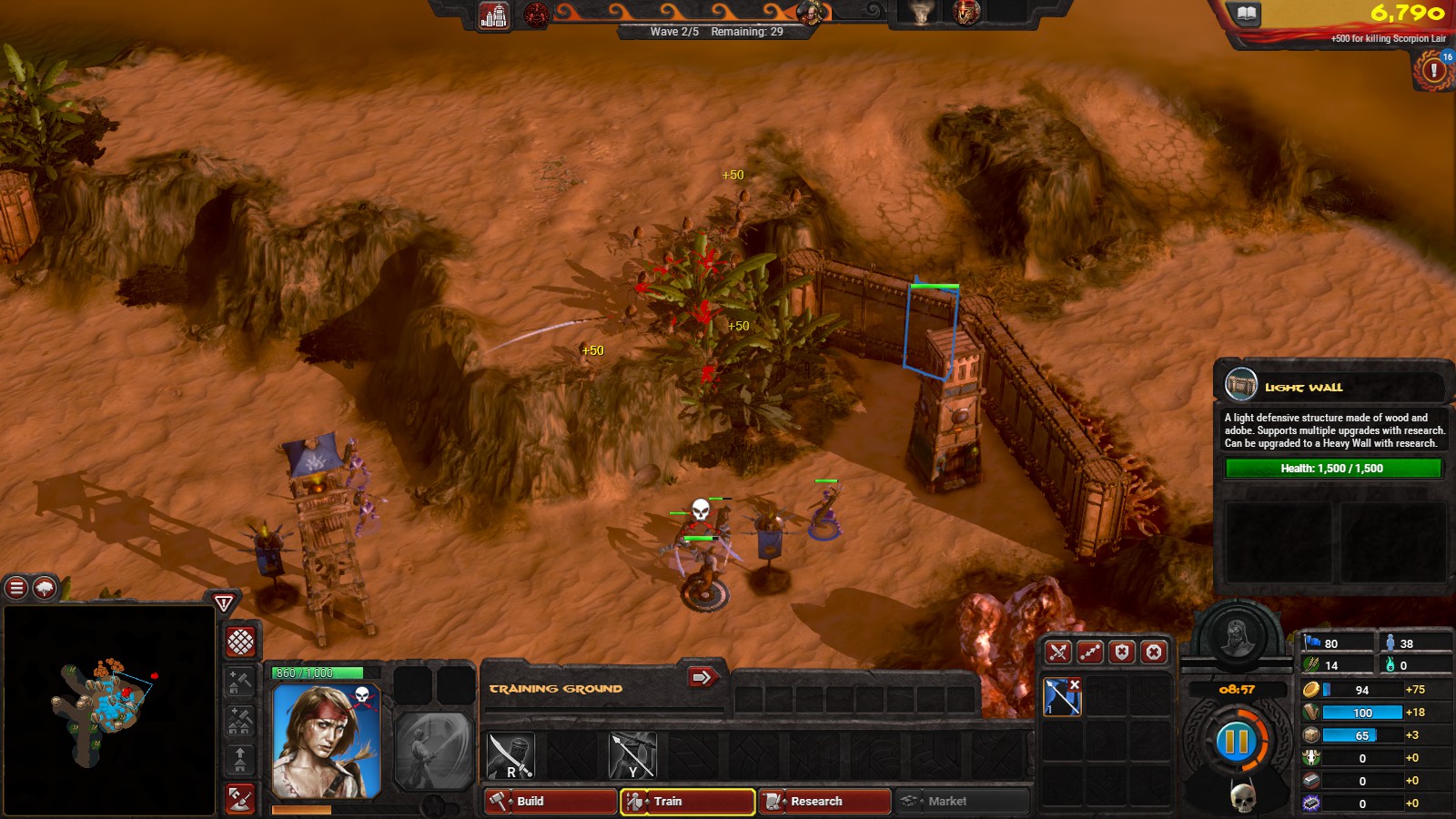 You can never seem to get enough of anything in this game. I suppose that might be intentional to play up the harshness of the setting, but I can’t help but feel it’s more than a little over-tuned.

To give you an idea of how absurd things can be, look at the Market structure. As in Age of Empires, the market allows you to buy or sell resources if you have an excess or a deficiency, but the number tuning is sheer madness. Selling five wood earns you five gold, but buying five woods costs one hundred gold.

Everything in the game is like that. Everything from the rate at which you earn resources to the time between attack waves is tuned just a smidge beyond anything that could be considered comfortable.

Make no mistake: This game hates you, and it wants you to suffer.

That’s not to say there aren’t some ways in which the challenge of the game can be quite interesting. The variety of enemy types, for example, keeps you on your toes in a way I do really like. At one point I get swamped by an army of spiders who can climb up cliffs, completely circumventing my walls. I had to pivot my strategy on the fly, and that’s the kind of challenge I very much welcome.

When things are going well, Conan Unconquered can be a very satisfying experience. When your defenses hold, you do feel like a proper badass.

But things almost never go well. Nine times out of ten you’ll be starved for resources, outnumbered, outgunned, and with no time to catch your breath. Most of the time I was so busy putting out fires — literally, that’s a thing you need to do — that I couldn’t even advance up the tech tree. 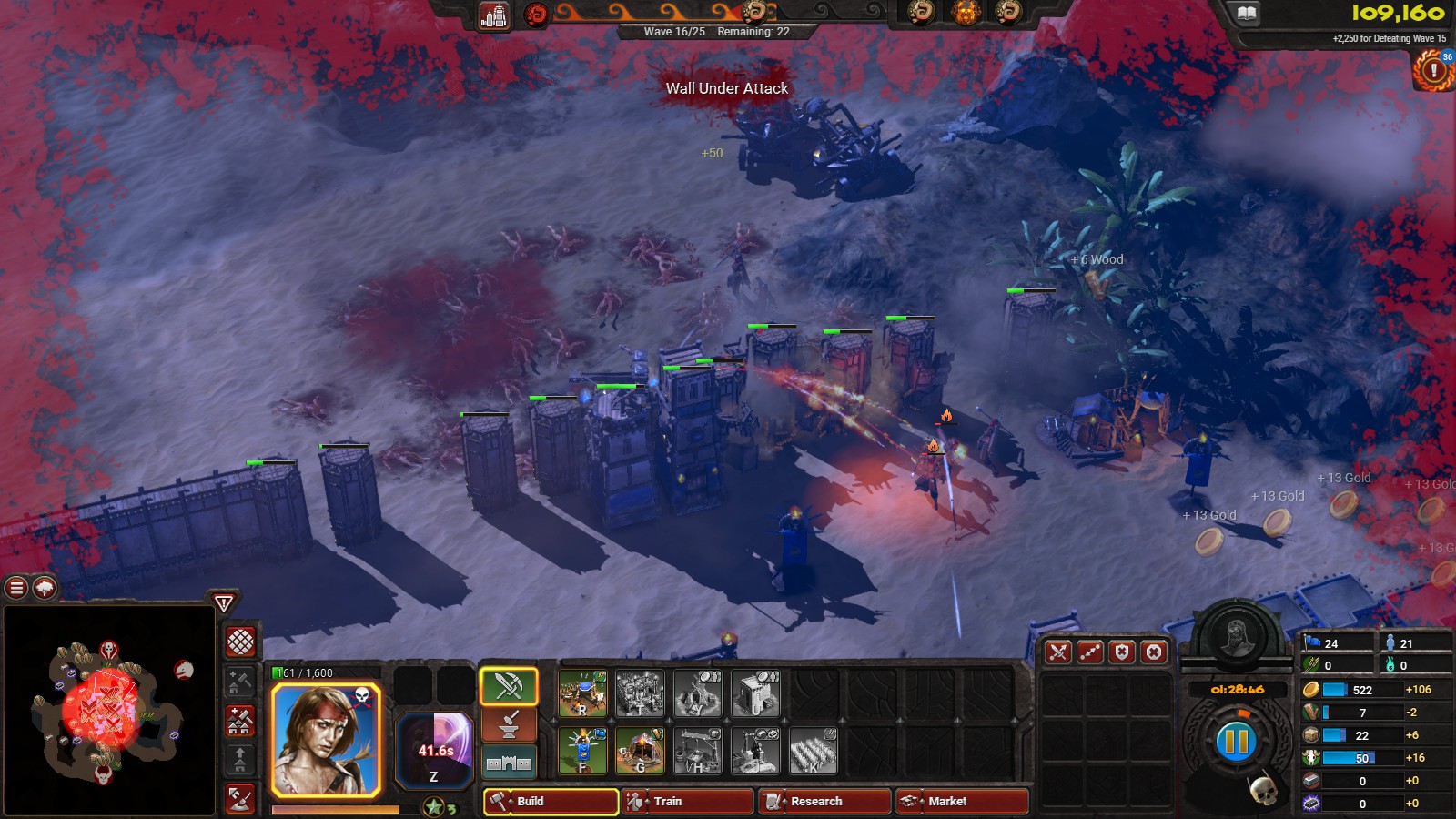 I’m not saying it’s unwinnable. I won the majority of the matches I played. It’s just not that fun. The challenge rarely feels unbeatable, but it always feels unfair.

Now, one feature of Conan Unconquered I didn’t get to try was its co-op mode. When I checked out the game, no one else was online, due to the fact that it hadn’t, you know, actually launched yet. It’s possible that playing co-op might have improved my view of the game, but somehow I doubt it. From what I’ve read, co-op ups the difficulty even more, to compensate for having a second army on your side. I see the logic of that, but the baseline challenge of Unconquered is so high that I think letting co-op just be easier might have been a better idea. As it is, I’m not sure I’d want to subject any of my friends to this.

After all that griping, do I think that Conan Unconquered is a bad game? No, I wouldn’t say so. But it is very, very niche. With its ruthless learning curve, punishing difficulty, and generally exhausting mechanics, this is a game that’s only going to appeal to a very specific strain of hardcore RTS gamer. I would consider myself a hardcore RTS nerd, and even I find myself more drained than thrilled by Conan Unconquered.

Good review. I normally love the C&C style of RTS games but this sounds just like a base-defense game. So I’ll have to pass on that. I don’t give a rat’s ass about multiplayer for a RTS — I just expect a decent campaign with an interesting set of stories. And this doesn’t sound like it!

Sounds like it needs some difficulty tweaking. Much better to make something easier than making it harder once you have a player base.

I’m curious if you have ever tried They Are Billions and how it compares to that. They seem like very similar games, but Conan has coop which They Are Billions never had which was my one complaint about that game.

I haven’t played it, no, but it came up while researching for this column. A little curious about it now.

I’ll take a turn based strat over RTS any day ;)