END_OF_DOCUMENT_TOKEN_TO_BE_REPLACED
Furbish up your pots and pans and spices and veggies, Guild Wars 2 players, as today’s patch makes good on one of Mike Zadorojny’s plans to buff up the forgotten crafting skills and bring them in line with the other level 500 skills. This week’s patch tackles cooking.

“When you reach cooking level 425, Sous-Chef Seimur Oxbone will contact you to check on your progress. Impress him with your skills and he’ll happily write you a letter of recommendation, sending you off on a journey to study with master chefs in every capital city. While you’re leveling your cooking skill, you’ll also graduate to a better class of tools and raw ingredients. Each instructor will help you obtain what you need, from a cutting-edge oven to high-quality meat and garden-fresh herbs.”

Guild Wars 2’s seventh anniversary celebrations have also begun today. There are a bunch of new player-designed guild emblems entering the game as part of the festivities. My own oldest toon turned seven; here’s what was in her box:

And then everyone’s picking up the anniversary box, one per account: 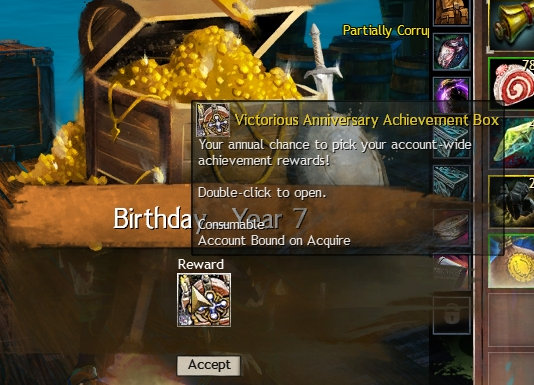 Yep, they got you a rock. To stand on.

The cash shop has also been updated with the “New Horizons” Supply Drop Requisition bundle. MMO players will recall that these packages are sort of like miniature season passes that distribute discounted but valuable loot across multiple weeks. The most interesting bit here isn’t the sale but the name: New Horizons. The last SDR was named for War Eternal and rolled out right before War Eternal itself did, so we might just be looking at a name for the next episode or season right here. The Endless Ocean weapon box included in the package also makes us wonder whether we’re finally about to see the studio do something with all the big underwater combat changes it made last summer. 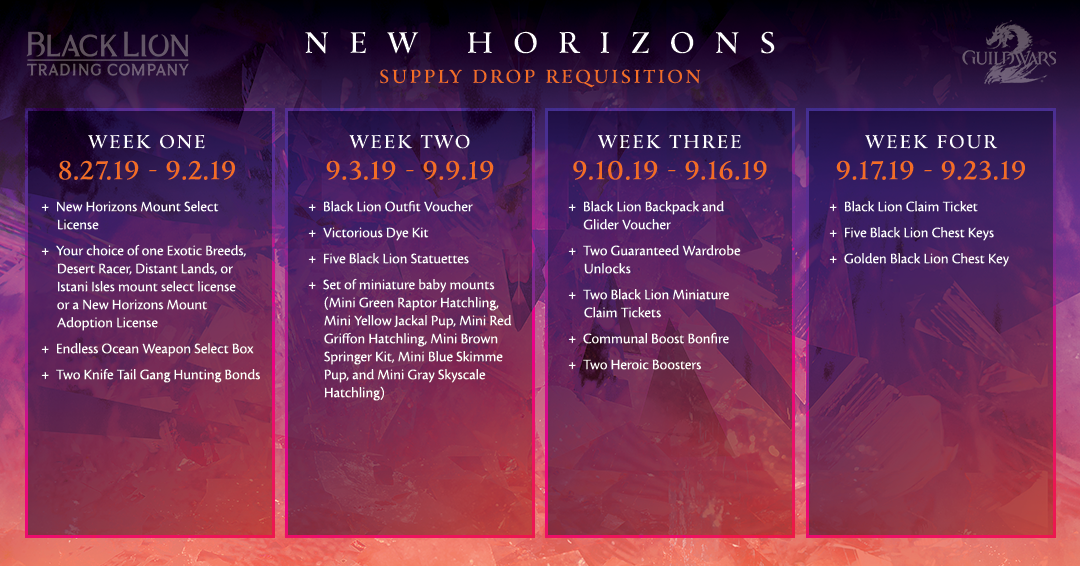 Reddit is already running wild with speculation, though of course we don’t have much longer to wait, as Friday ArenaNet is planning a big PAX West-adjacent reveal of its next living story season, hopefully setting the stage for the future of the game.

Don’t forget to swing by the cash shop for a freebie lockbox and key as well. First taste is free!

Hmm, maybe LS5 will be our ocean journey to Cantha, which will lead into the next expansion in 1-2 years. A lot of players are saying that their future with the game hangs on Friday’s announcement — but I can imagine that won’t go over very well with most of those same players hating underwater combat. 😂

I think it sounds rather fun.. no one does UW combat like GW2.

I think that’s a safe bet for the next season starting mid-September based on the requisition schedule. It would have been nice if Friday had included the announcement that it’d be playable soon after though. It makes me wonder if they’re going to tie in some kind of monetization for it to give people time to buy in or such. Goodness knows the community has been ready for new content for a while now.

The cooking post 400 isn’t too bad, though it unsurprisingly involves some ascended daily-limited crafting materials. I’m not in a rush so I’ll just take my time on that one.

Now to wait for Friday’s announcement. I’m keeping my expectations low, though I hope they’ve got something to attract players back to the game. Maybe if it’s good enough it’d attract new players too, who knows.

The funny thing is, this isn’t even the worst content drought in GW2 history. Even if we ignore Dragon Bash event and others, the last episode was what.. 2-3 months ago?

Thankfully they added in some other game events (like champion rush, or whatever) to incentivize mixing it up a bit.

I’m not expecting much on Friday – a preview of LS5 and maybe a new feature-level change.

I don’t think I’ll ever forgive Arenanet for basing the gifts on toon age rather than account age.

I deleted all my original characters so I could swap the names around, before they did the name swap coupon. So now my first guy is technically on 9/1 for 7 years. Kinda annoying.

I’ve leveled like all 20+ of my characters to 80 on Cooking.

MMO Week in Review: Into the Shadowlands

The Daily Grind: Which IP should never, ever be turned into...

The Stream Team: Going on a post-holiday Heist ‘shopping’ spree in...