It seems that the final week of Torchlight Frontiers wanted to see me out with some bruises on my butt. I don’t know whether it’s because there was some sort of stealth update or I put on the wrong equipment or what, but the final leg of our journey in this game was tough.

I’m not entirely sure it’s a fault of the build I was chosen. The Cannon Shottie, as voted upon by you fine folks, had all the distances covered, whether it was the single long-distance piercing shot, the equally long-distance burning mortar shot, or the individual regular attacks that worked at medium or close ranges.

Perhaps, then, it was a failing of my equipment. I often run into this problem in ARPGs where I find a selection of gear that just fits with the way I play, and then a new shiny item drops and I immediately slot it because I see larger numbers and go “Ooo!” without considering what other things it does to my output. It’s a bad habit, I know. I can’t help it. I get lootblind. 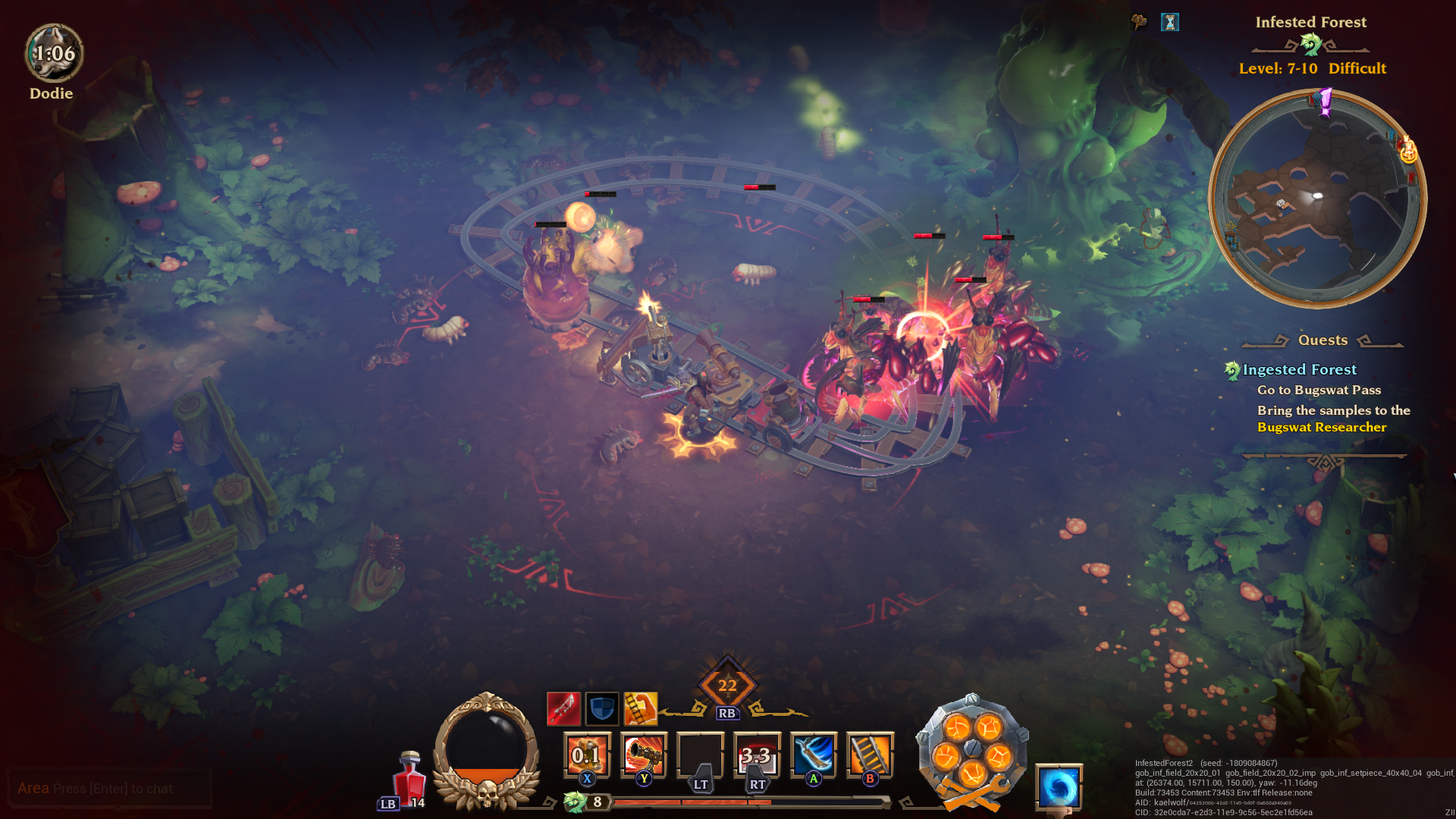 Whatever the reason, the Hyvid Frontier wanted to make sure I left with some scars. More than a couple of times I managed to get myself overwhelmed by mobs of poison-leaking Hyvids or tough-as-nails enemies that had those beefed-up affixes that ARPGs love to randomly apply.

I think one of the more frustrating things I was running into, though, was an enemy type that knocks me backwards. This is literally something that cannot be mitigated, and when you’re shoved, all the attack animations you’re doing stop. Now imagine that happening multiple times in an engagement. Every time I would try to go on the offensive, another member of this swarm would shove me backwards, halting all offense.

After some perseverance, however, I was able to get to a point that I was starting to whittle things down again. I got a dropped poison sword which played well with the DoTs that my Mortar Cannon scorched earth DoT and the bleed that my Relic Weapon applied. All of these tricks combined to slowly but surely melt the enemies that crowded before me. I felt powerful again, especially because withering away my foes is one of my favorite forms of DPS.

And then I went into a boss room that had me face off against a giant, poison-spewing flying Hyvid monster that did a charge attack that one-shotted me, and that humble pie was fed to me once again. 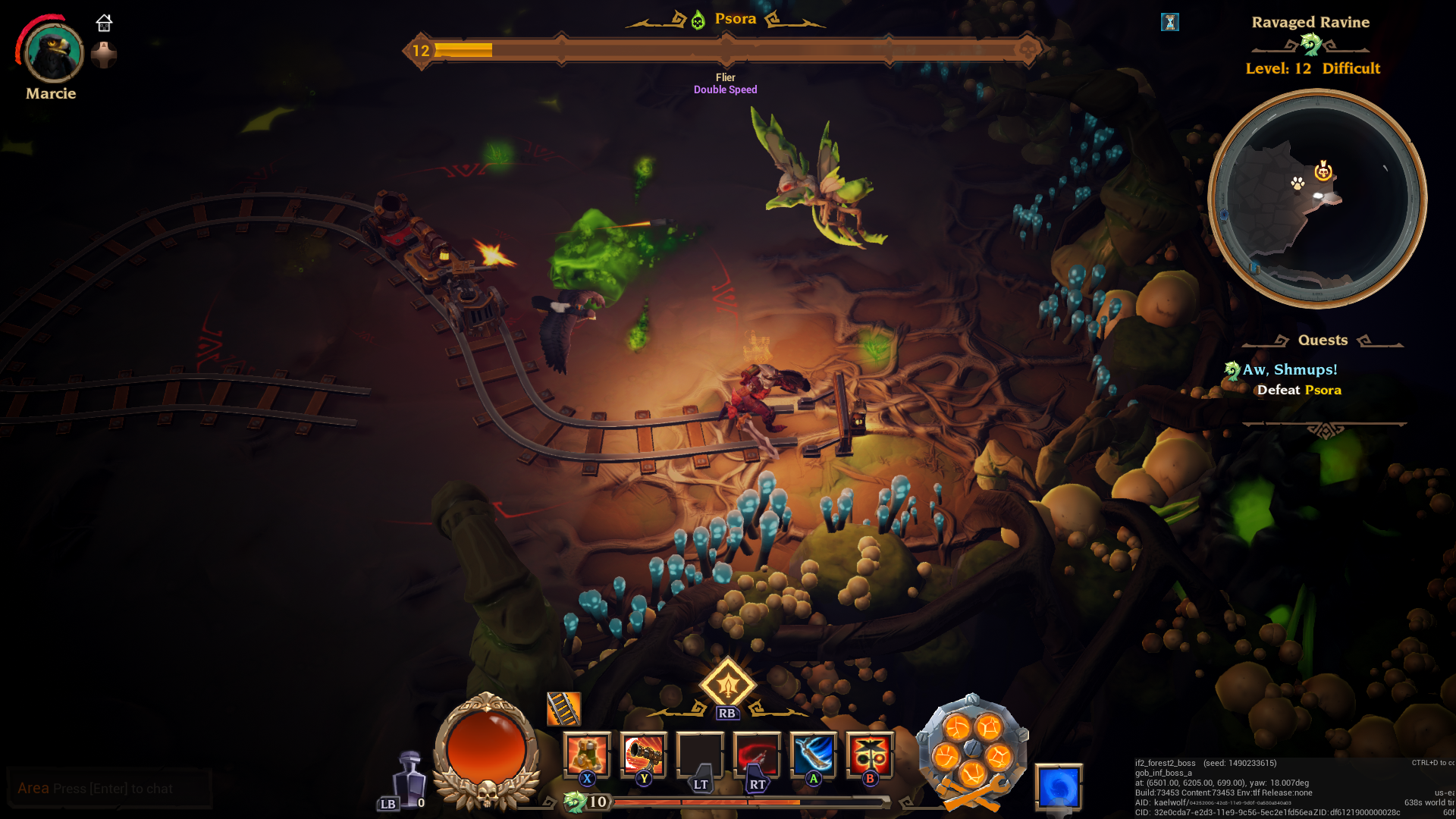 In fact, there were a couple of bosses that I took on who managed to carve me into delicious souvlaki. I’m ashamed to admit that I spent at least a couple of grand in gold to revive in the same place I died, but I was able to make the money back by selling my unwanted drops. Still, I would have rather used those items to feed my Luck Tree.

So where does Torchlight Frontiers stand? Well, as an alpha game, it certainly seems to be a complete piece of gaming, though it also has those frayed edges of an incomplete release. There are weird UI things that happen like when I navigate the world map using a gamepad. I really would have liked to have a way to actively command my train cars to fire where I wanted them to. Attacks don’t have any really significant impact, loot feels like an incremental boost in power, and the Relic Weapon – an item that feels like it should be impactful and super – really kind of underwhelms.

With all of that said, the game was pretty stable every time I played it, the combat was fun enough (when I found a combination of equipment that didn’t get me insta-killed), and when you get an item of significant rarity, it really does feel like a serious boost in power. Also, this game is oozing with that unique Torchlight style and charm, which is another way of saying that it’s colorful and really whimsically animated. If you can’t stand to play these things without grimdark aesthetics, Torchlight Frontiers isn’t going to offer you much, even at this alpha stage.

Ultimately, I am really eager to see where the devs at Echtra Games take this one. The foundation certainly feels solid and well cared for; now it just needs to be refined, improved, and especially built on. I really want to see more classes added, and I want to see more skills for the three that are in-game now. If these devs are willing to make a pet train class and an adorable robot class, then I have to believe that the only limit is the team’s imagination. And these are already pretty imaginative class ideas. 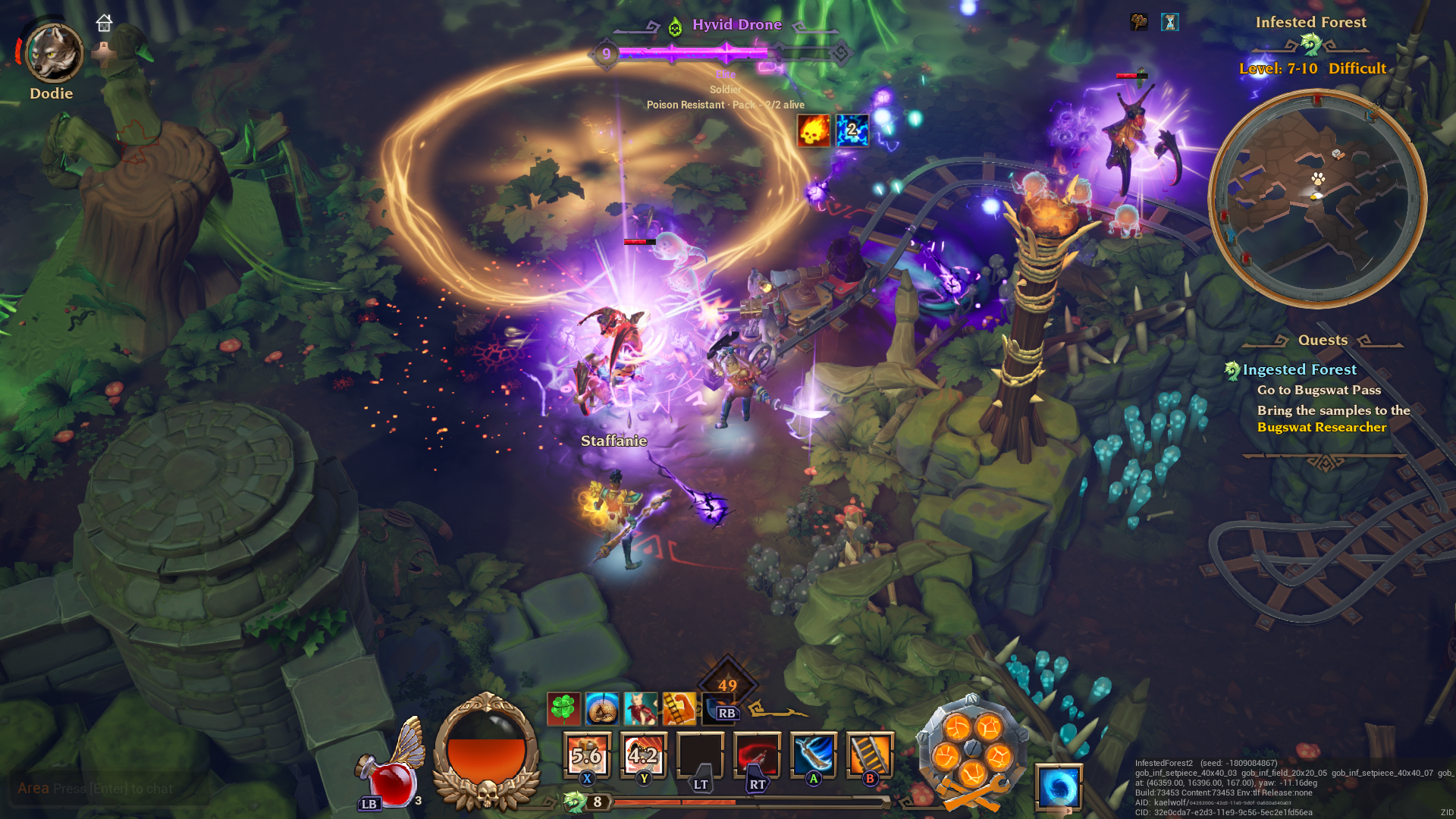 That’s the end of our little MMOARPG jaunt, so now it’s time to move on to our next game. I have once again pre-empted any voting for November’s game with my own choice. We’re going to the magical survival sandbox land of Citadel: Forged with Fire. It’s launching this November, and I thought it’d be a good selection for our next chosen adventure, especially since it appears to be a pretty open book of a game.

Full disclosure here: I am not a fan of survival sandbox games. I actually think that they’re even more uninspired design-wise than battle royale games. So what made me pluck Citadel from my hat? I like magic stuff. Simple as that, really. And who knows, maybe this will be different enough that it will jar me from my ambivalence from the genre. So consider next month’s CMA a review-in-progress for this one.

First, though, are the polls! Our first poll will decide what kind of magic caster I’m going to be. I did a bit of research and know that there are four different types of weapons, which effectively determine what types of spells I’ll be able to use for the most part, though I understand there are also spells that can be cast by all weapons. But that’s something we’ll have to explore later, first: what weapon should I start off with?

Which weapon should I focus on in Citadel: Forged with Fire?

Next poll is about our focus. I’ll be heading into a PvE server to start off with (and will probably stay there for the foreseeable future unless there’s enough desire for my soft self to enter a PvP realm), and since things in this sandbox seem pretty open, this poll is a pretty general question on the kinds of activities to focus on. So here’s what I’m thinking:

What should be the general focus of my romp through Ignis? 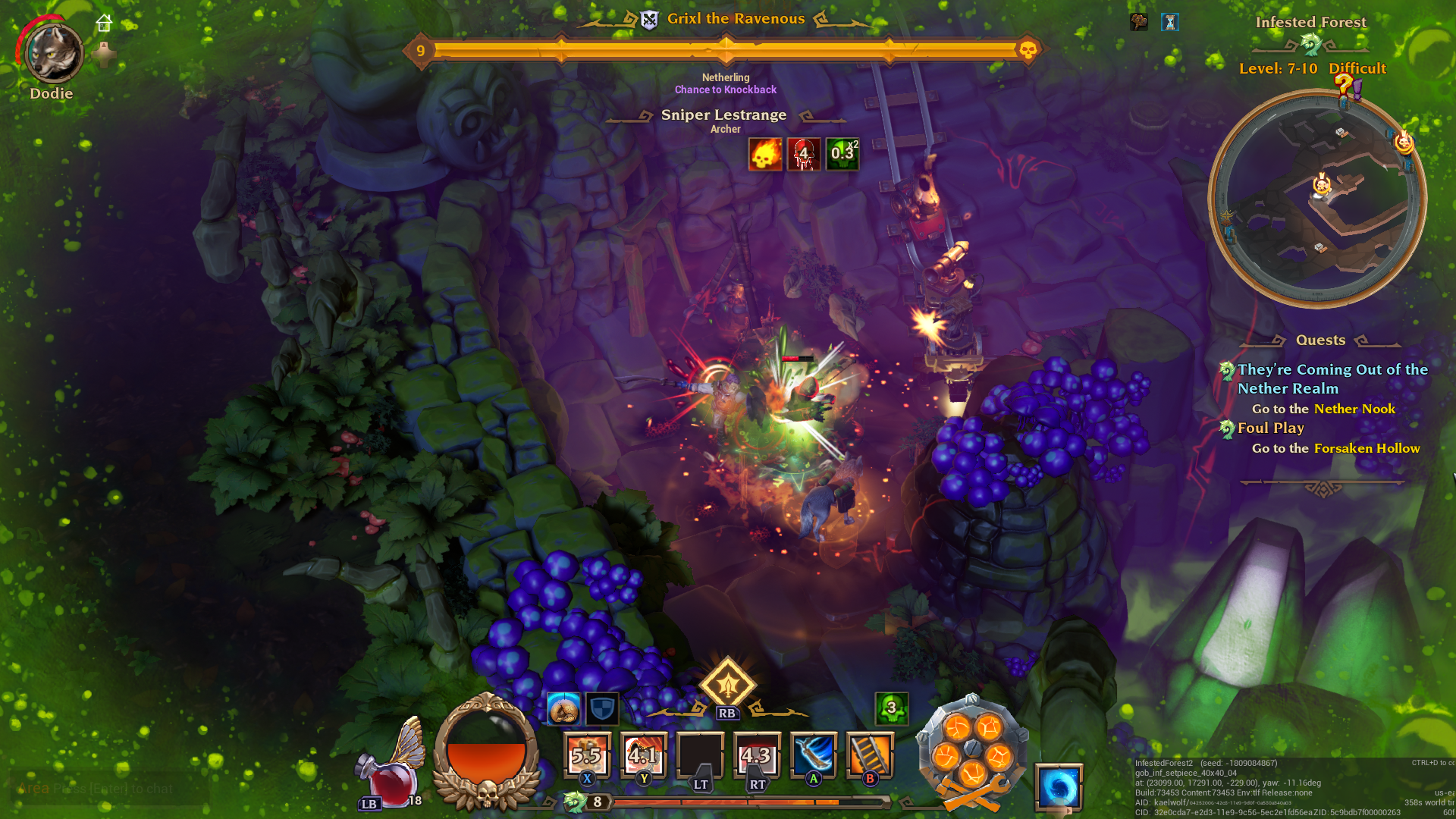 As usual, polls will wrap up at 1:00 p.m. EDT this coming Friday, November 1st. Here’s to some magical adventures and to a launch that isn’t plagued by too many debilitating server woes!