This one’s going to be a doozy, I can already tell.

My first arrival to Citadel: Forged with Fire was a bumpy, rough, unpleasant one. At the same time, however, it has a couple of interesting hooks that even my survival sandbox-disliking self can appreciate. So week one was basically a combination of frustration, confusion, amusement, and interest. Truly a swirling cocktail of emotions from one game.

Starting life in Citadel is very much like starting life in a game like ARK: Survival Evolved in that you wake up in first-person mode in the middle of a new world. Except in Citadel, you wake up literally being forged with fire. It’s… interesting, but it also doesn’t really seem to be anything that’s addressed, as the first NPC I met basically said, “Oh, you’re here! Go pick up rocks and sticks!” 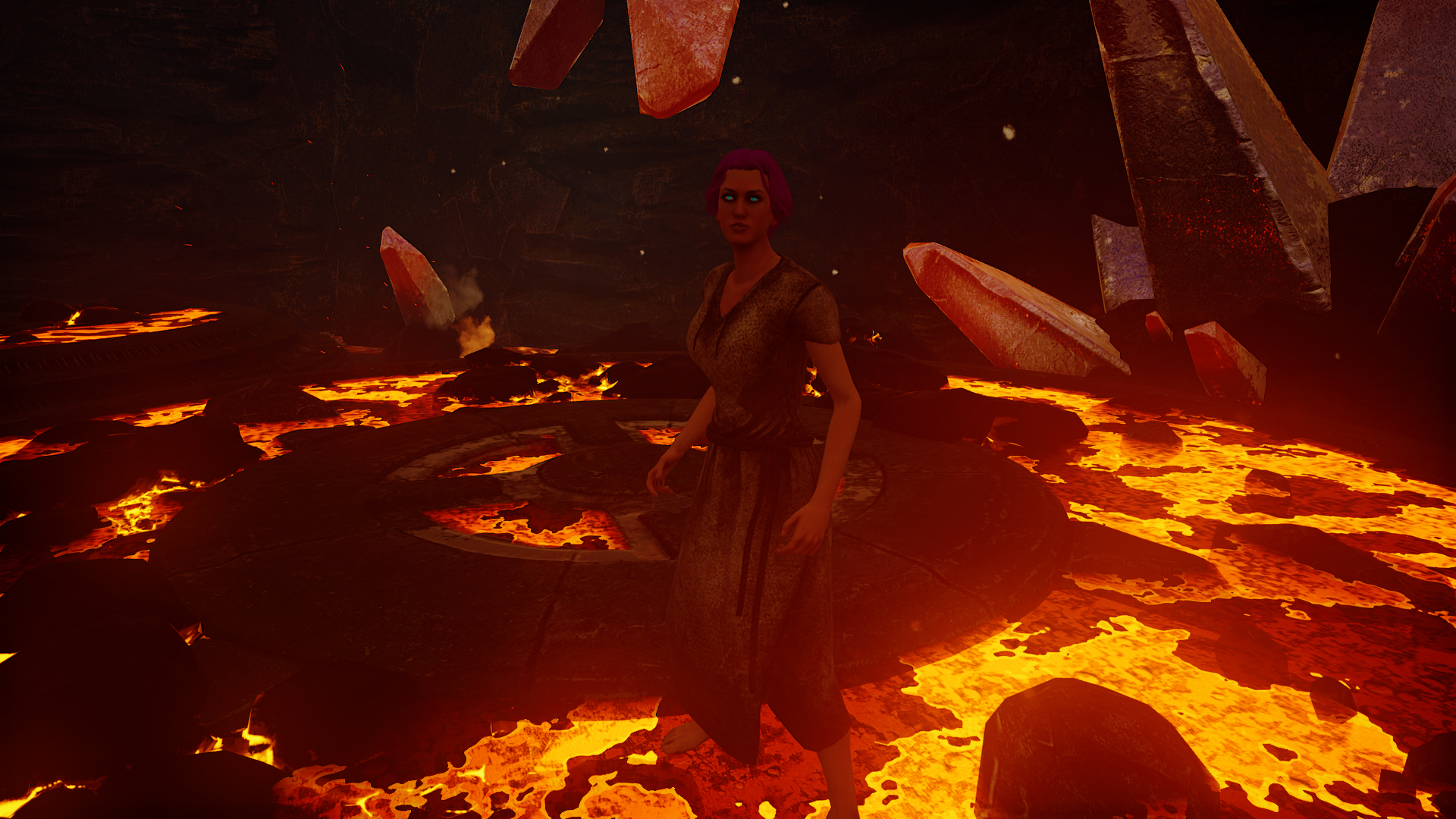 That was about the introduction to the game that I had, as nothing on my screen really offered any indication of what I could interact with or not, what direction I was facing, or even if punching trees and rocks was how I got raw materials.

Look, I know that punching trees and rocks is a stupid way to harvest things, but it worked in other games of its ilk.

So basically I was running around, punching flora, hoping for something to happen, when a boar bumrushed me and took me out. It was after that first death that I realized that not all of my UI appeared on-screen. Suddenly, there was a reticle and a pop-up indicator of when I was near something interactible and a compass. Direction! Insight! Conveyance! 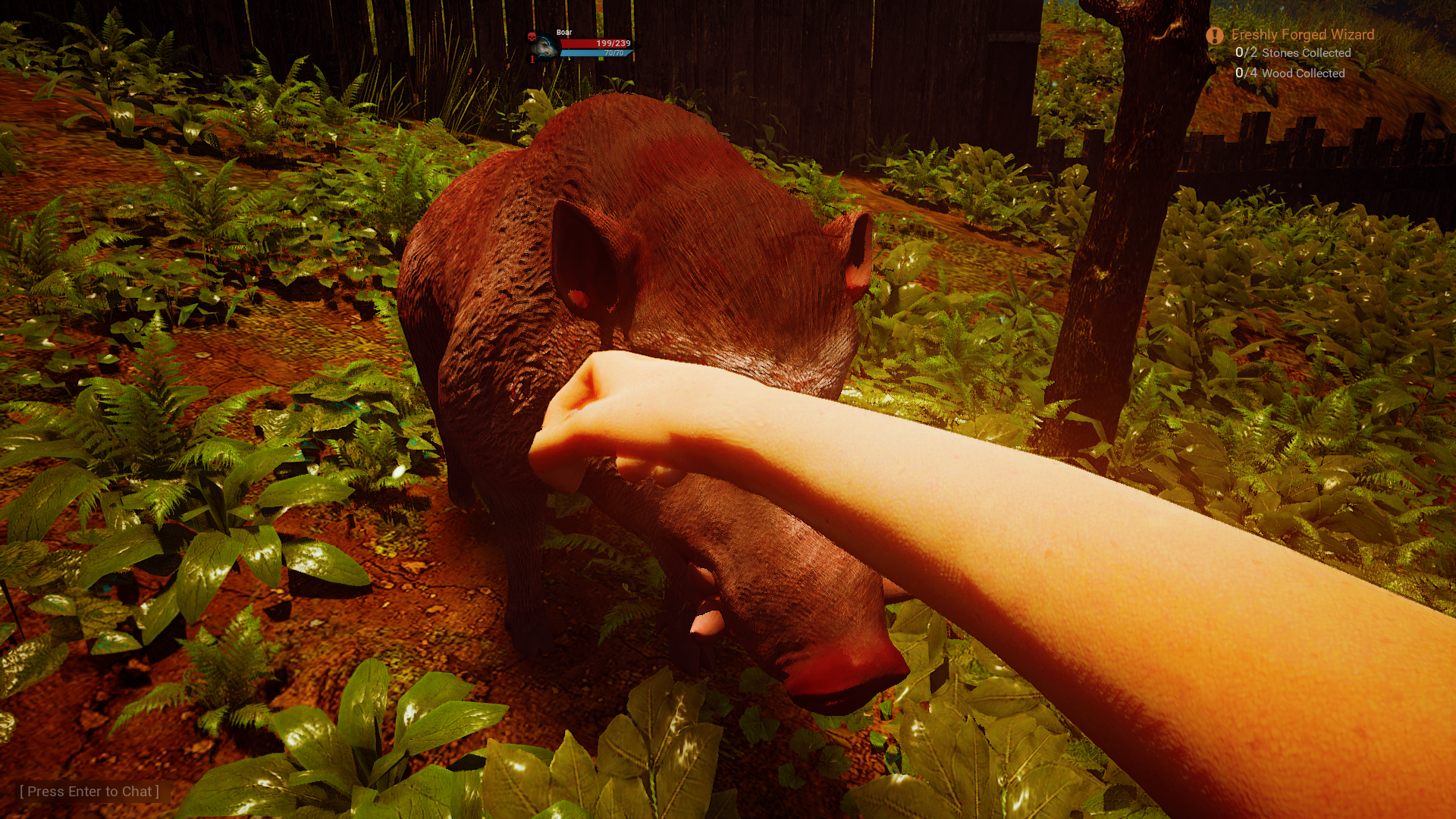 With that random bug surmounted, I was free to dive into the mire. Much as in other survival sandbox games, you’re effectively dropped into the middle of the world and given agency to tumble around figuring things out, though there are a few tutorials that are granted by that first NPC which seemed to be a good thing to follow through on. Both these “quests” and the stones littered around the chosen safe area I spawned at had details on how to navigate the UI and play the game for the most part, but they were also kind of nebulous and slapdash.

Case in point: the Spellbook, where you can create spells, apparently. This UI element is effectively the primary method for how you get spells to use, which is pretty vital for being able to defend yourself, nevermind being just a regular ol’ mage. Seems pretty vital, yes? The tutorial, however, didn’t actually point out how to use this part of the UI until several steps later. I only learned how to use the Spellbook by futzing around with the buttons and looking at the hovering tooltips.

Even then, I only apparently got a rudimentary sense of how to make it work: there’s evidently a resource called Essence that lets you unlock different elements and craft certain spells based on type. Which, once again, feels like information that should have been delivered sooner, if not first. I eventually would have figured out how to pick up rocks and sticks, likely; I sure as hell didn’t know how to craft spells without the tutorial guidance. 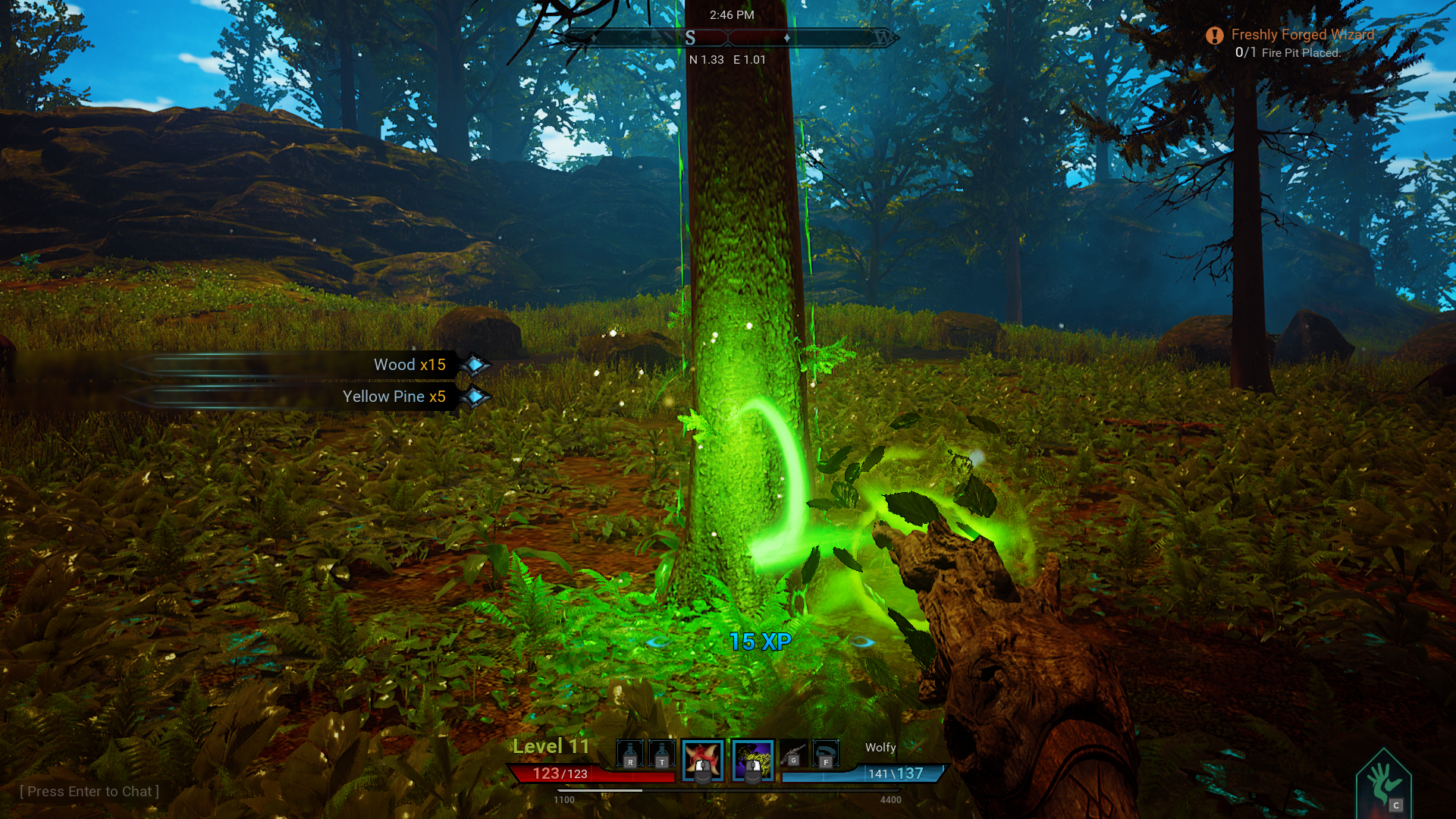 Poorly arranged onboarding aside, though, Citadel started to show a couple of whiffs of intrigue. Many of the items that can be created seem to be interesting, especially the flying broom, and I even unlocked some . I also found myself enjoying playing around with the Spellbook to unlock the spells I could. For example, using a Life Essence for a Utility type spell on my staff’s secondary attack button yielded a spell that let me suck up raw materials from rocks, trees, and other formations. No pickaxe for me!

There does seem to be a sense of discovery that pervades much of Citadel’s charm. The area I started off in is extremely gorgeous, and I am very curious to try to push myself through to new areas and find new challenges. But then, this is a shared open world so sometimes those discoveries are already discovered, like a cave full of wolves that already had its treasure chest looted. Also, exploring certainly has its own inherent dangers; at one point while wandering around, a skeleton came up and whupped me.

Another thing that’s nice about Citadel is that it doesn’t have too many of the survival sandbox contrivances that someone somewhere thought was a fun game design idea. My character has boundless stamina and never needs to eat or drink, so I can actually get about the business of exploring. Of course, there’s still other designs inherent in this type of game that Citadel feels compelled to abide by, like having to unlock recipes for the most basic of needs like health and mana potions, armor, and weaponry.

And then, of course, there are moments where Citadel just doesn’t do things right in its own unique way. Spell effects seem like they should be impressive but thus far they underwhelm. For example, I found a poison geyser that says it sends enemies flying but instead just sort of shoves their static, uncaring, unflinching model aside for a couple of points of damage and then bugs them out to stand there, nonplussed and unsure of whether to attack or not. At one point, I killed a wolf and it had elk meat in its inventory. And then there’s the Barkskin spell that sounds like it should make your character have bark-like skin or armor but instead covered my character model in TMNT mutagen. 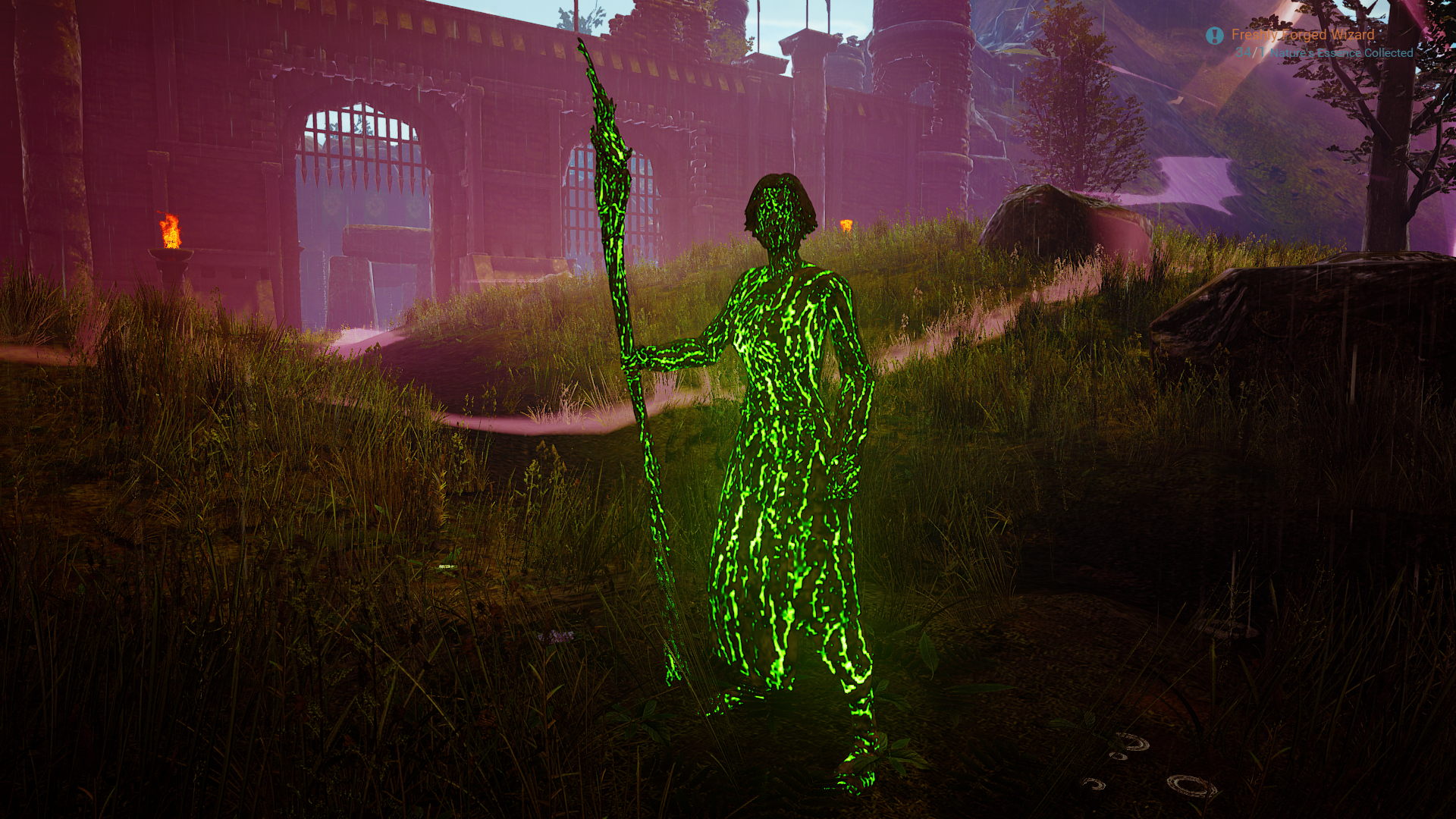 Visual weirdness I can let slide, though. It’s bad design I can’t abide by. At one point, I wasn’t sure how to build a campfire – again, another thing that feels like it should be clearly explained – until I looked up the answer online and also noticed an unexplained blinking UI element on the bottom-left of the screen. Apparently, a diamond shape with an icon depicting bricks stacked on one another and the small letter “B” on the corner is how you enter Build Mode. No actual instructions given, just a blinking light.

There’s also the alarmingly infuriating problem with finding a place to build. There is no clear visual indicator of where an area is a no-build zone or where another player’s house keeps you from placing your own stuff on the ground, so I was left running around, hoping for my red campfire to turn blue and let me place it, which, in a nearly full server like the one I chose, is supremely frustrating.

Still, I want to keep plugging away. I’m not ready to quit yet, but I could absolutely use some guidance here. 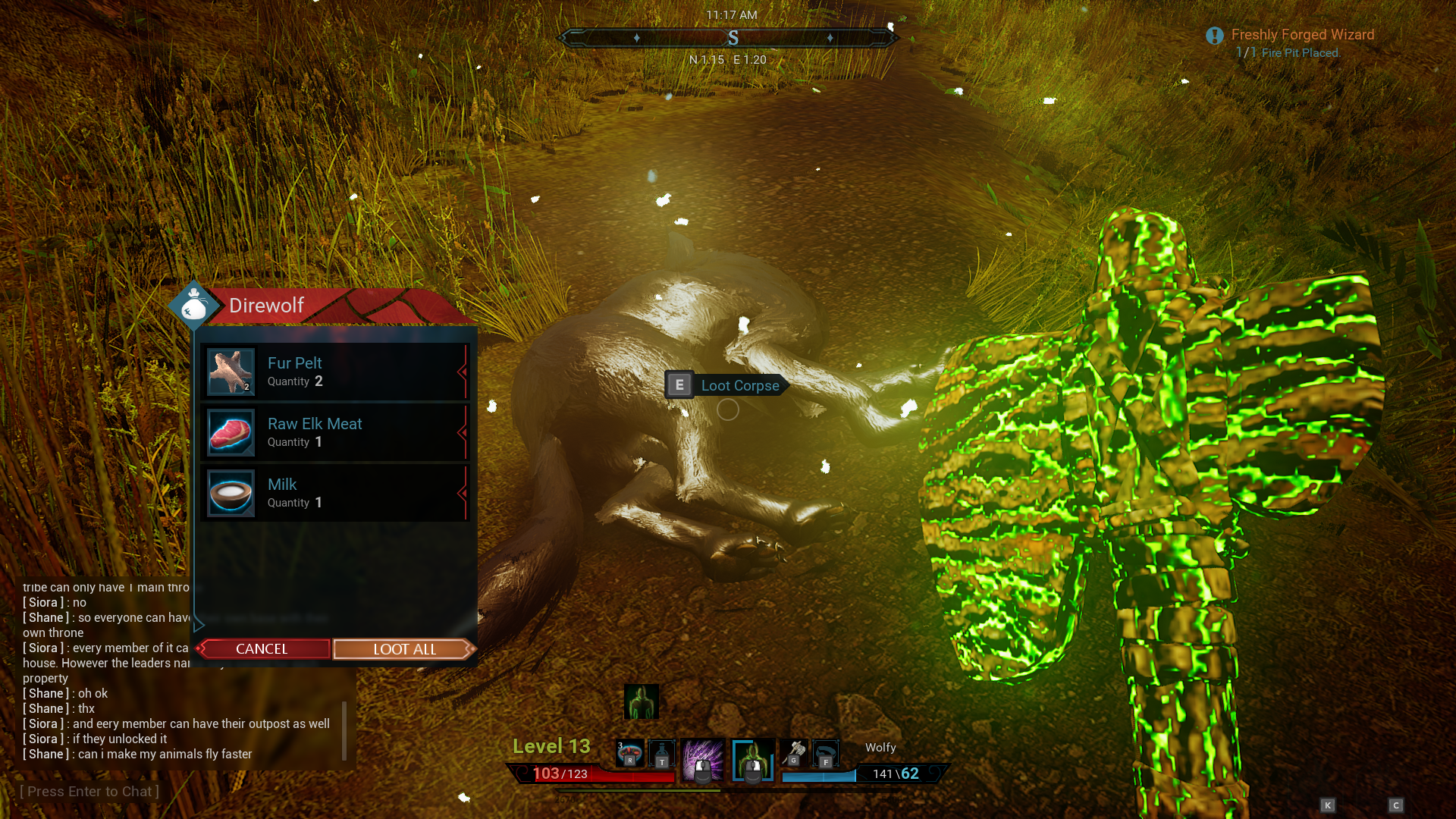 First off, let’s address the question of server. I chose a populated one because, well, I want to maybe do stuff with other people, but there are also at least a couple of features like crafting higher-tier equipment that require me to find a place to settle and build crafting stations, which means most of the good land is gone. So it’s a question of whether I start over on a new, less populated server and have more land to build on but have to climb the levels again, or stick with my first choice, keep plugging, and maybe find a less-safe place to build.

Which server should I continue playing on?

Secondly, it’s the question of how “hardcore” to be. On the one hand, discovering things on my own and unlocking stuff without a guide definitely has its joys, but on the other hand, boy oh boy do these tutorials kind of suck. So, do I find guides to help me along and expedite the experience for everyone, or do we fly blind and do stuff ourselves?

Should I get some guidance or go it alone? 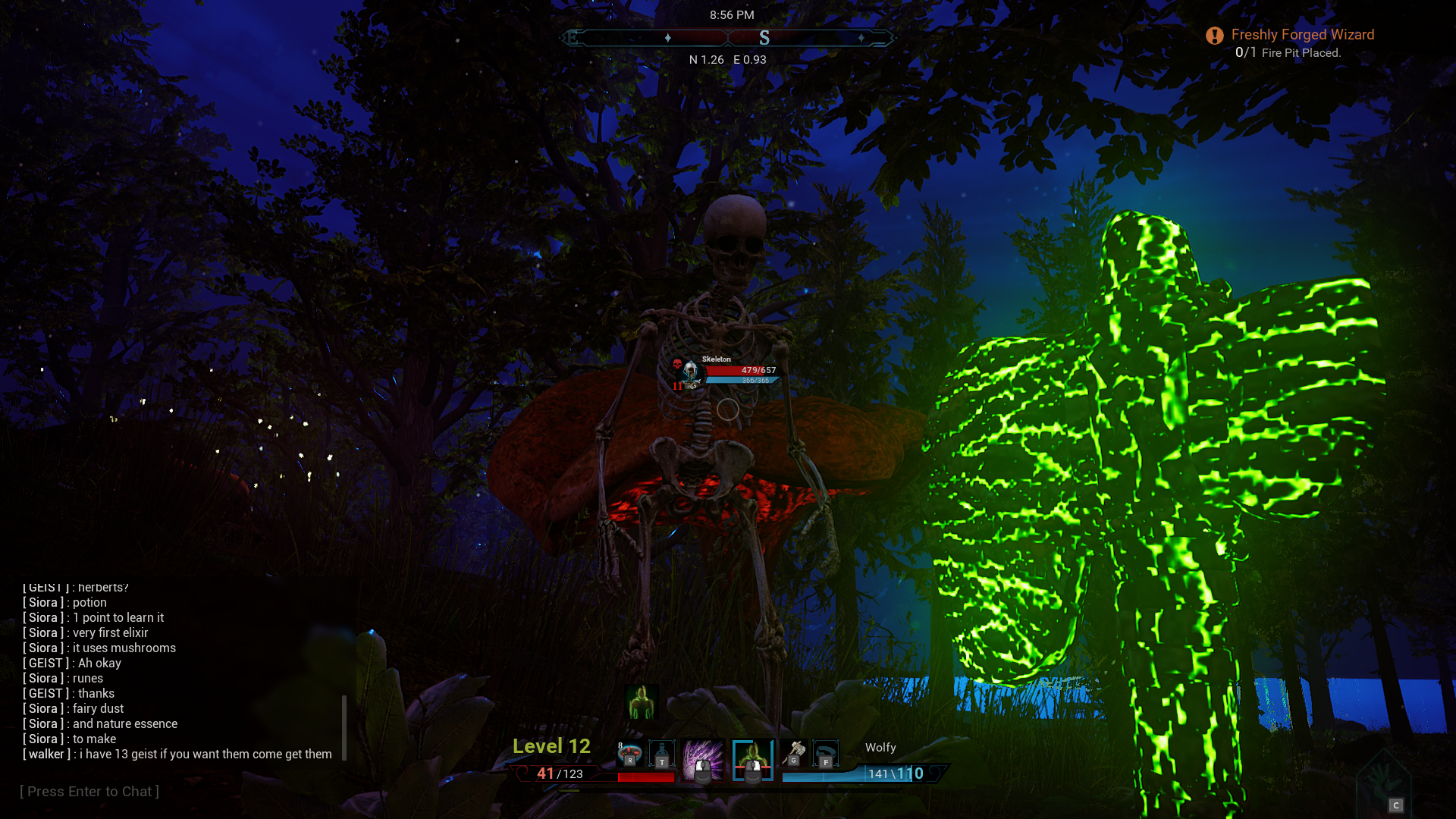 Like usual, polling closes at 1:00 p.m. EDT this coming Friday, November 8th. I’ll keep myself parked where I am in the meantime and not touch Citadel again until polls give me instructions. Thanks as always, friends!