As we come to the close of our Citadel: Forged with Fire adventure, we decided to push the absolute limits of how far we could go. Considering the direction we headed – north – it was bound to end in failure, particularly since one of the commenters remarked that only high-level zones are in that direction.

But what’s an immense gulf of level disparity between menial levels of glory and epic levels of silliness? 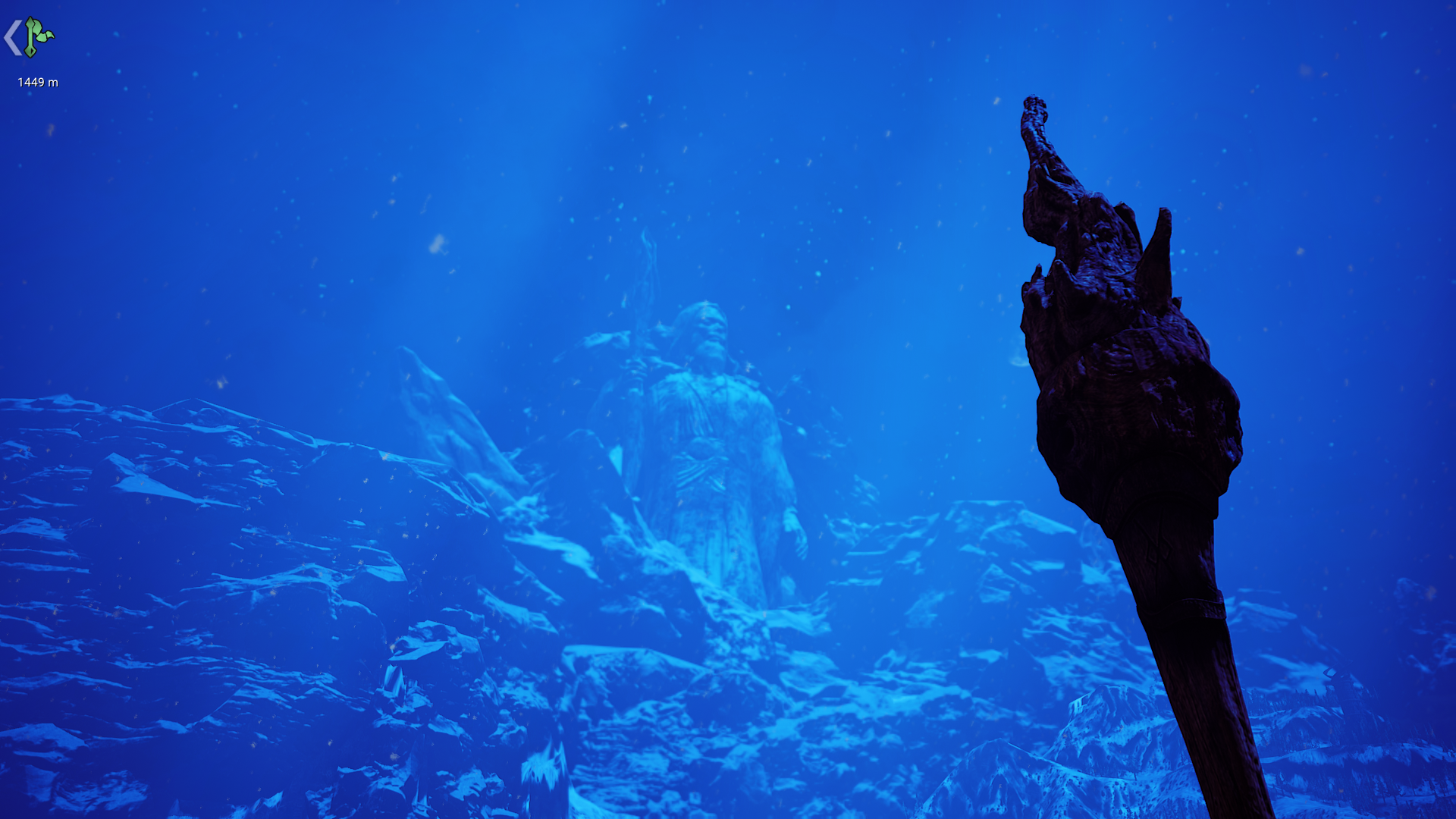 Sure enough, the moment I swam across the large expanse of water towards the frosty mountains in the north, I was met with a popup that mentioned I was in level 50-60 territory. Everything was basically telling me this was a fool’s errand. However, some reasonably careful maneuvering and spatial awareness was seeing me push on.

Most of the lands in this area, as one would likely expect, were pretty sheer cliff faces or steep rises, meaning heavy use of my broomstick mount would come into play. It also meant that most of the land geometry would leave most wandering monsters incapable of walking around, so I felt confident that I could delve deep without running in to a lot of trouble, and for the most part that was accurate.

The plan of action and steadfast press northwards would offer me my first reward in the form of a somewhat ominous tower, which I decided to scale. Doing so granted me a new fast travel point that I could use when I wanted! I would have almost no point in doing so now, of course, but it was an unlocked thing that I wouldn’t have otherwise gotten if I didn’t venture, so I called it a win. 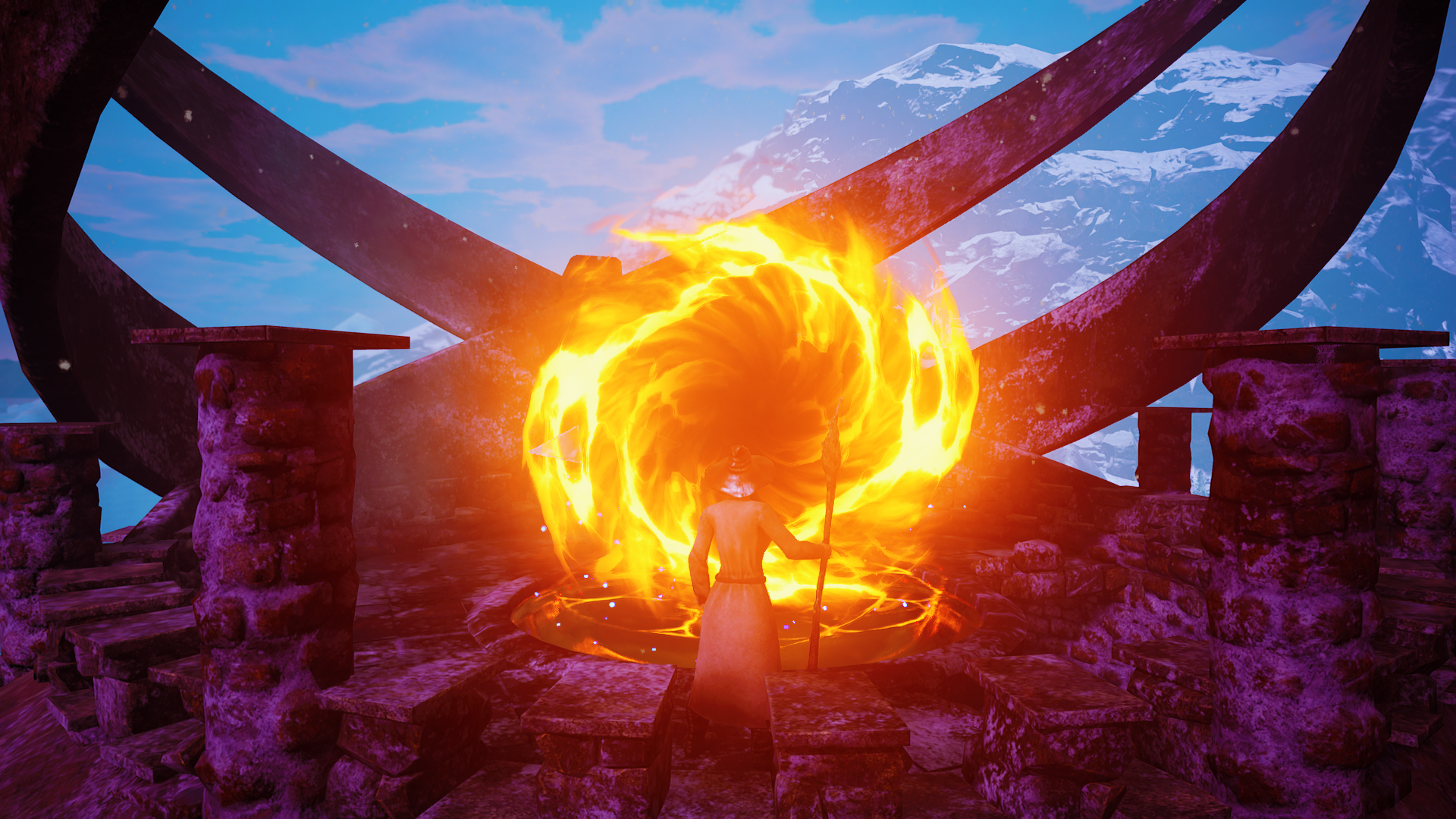 A bit more pushing on saw me get another reward in the form of some Ice Essence nodes to harvest. A whole bunch of them, in fact. I gleefully hoovered them up with my staff and equipped my wand with a new ice beam spell. I now have a frosty laser that slows down enemies as I zap them to nothing. Seriously, this is probably the first really good offensive spell I’ve gotten.

These small victories and the astonishing views I was taking in as I traveled emboldened me. This was going extremely well and I was better than 1,300 meters away from the Noob Box. I was feeling great.

And then the dragon came. 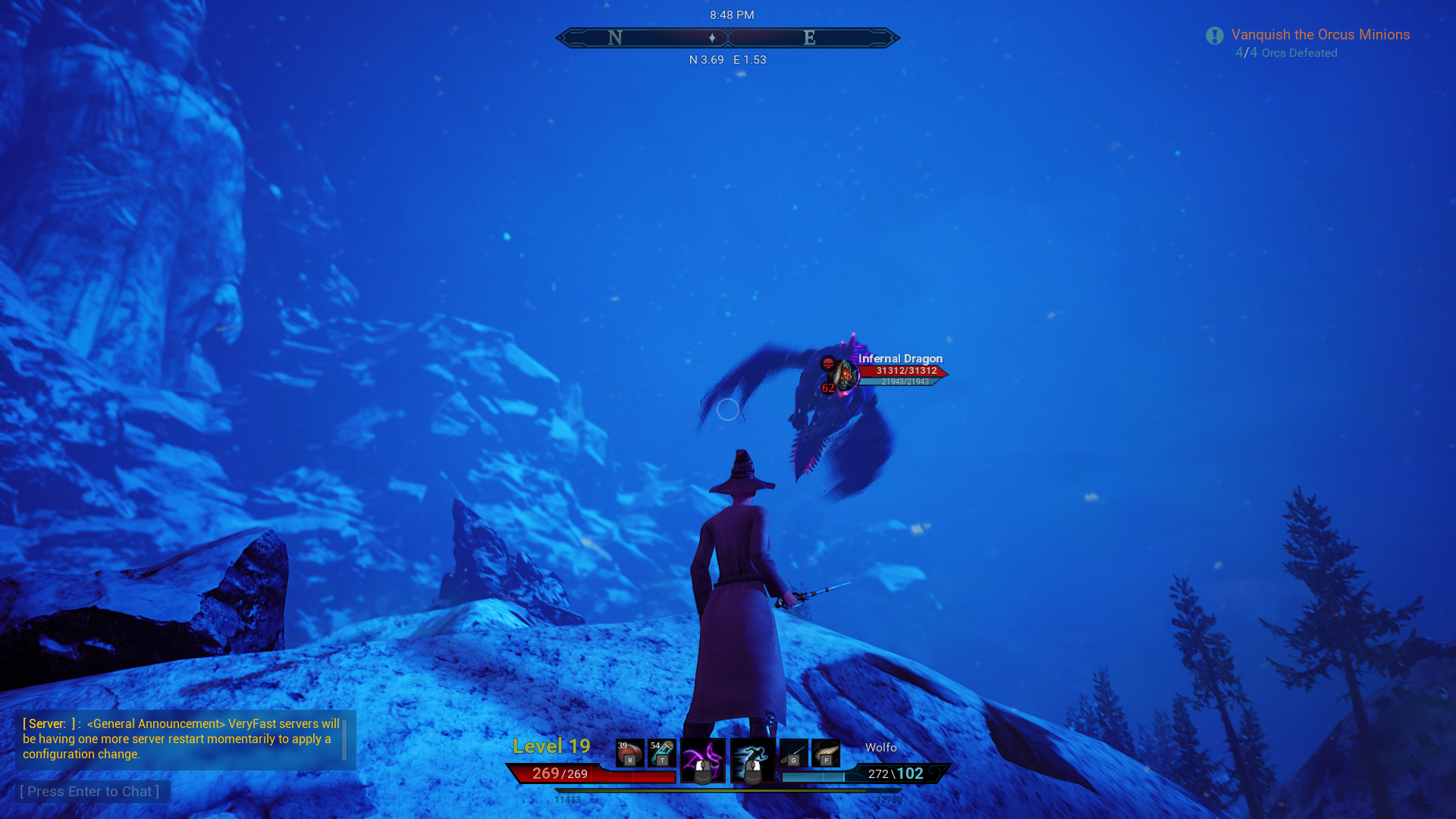 I had run across at least one dragon beforehand and, naturally, I gave it a wide berth. It was pretty large and easy to spot, so it was simple. But when I saw a random treasure chest sitting at the top of a cliff, I was blinded by possible treasure to the dragon that was standing just a few meters from it. The one who gave chase. The one that I forgot has wings and could fly after me on my broom.

Honestly, I had that death coming to me, but I was not to be fully deterred. The marker of my dead body was not too far away from the new fast travel point I had unlocked, and I wanted to recover those Ice Essences I had harvested. Within a few moments, I made my way to my dead body’s loot bag, which was floating in midair, funnily enough, and recovered the things I had gathered.

Moving on, I saw another tower even further north. Perhaps this would be another fast travel location, too! A sort of checkpoint if I die and perhaps a portal to easy high-end materials when I’m at the right level to brave this area! I was motivated and made way, avoiding undead things with spears, these ghastly monsters called Deathweavers, and making sure there were no more surprise dragons. Further and further I roamed, nearing 3,000 meters away from my house.

Of course, it would all begin to fall apart here. An undead creature caught me unawares first, leaving about 1,000 meters between my corpse and the fast travel point. Then, a curious monster giving chase caused me to stop and ponder what it was, giving it just enough time to unleash a fireball at me and one-shot my silly self. I was dying so hard I was literally losing clothing, so robeless and shoeless, I decided to call my sojourn to the far north a wrap. 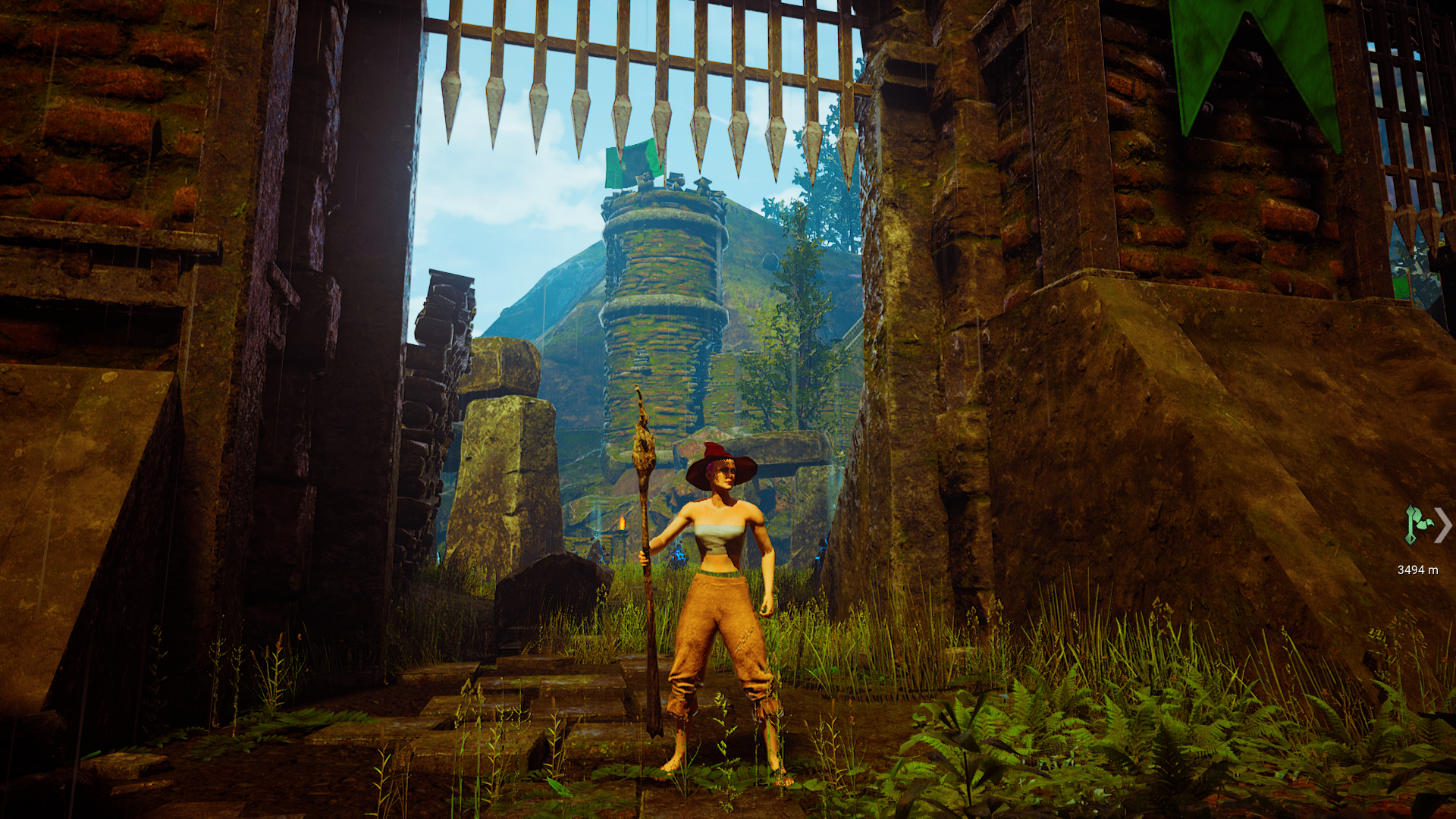 The following day I elected to focus on the second voting option of building up the Noob Box. After making myself some new (and better!) clothes, I got to work hoovering up as much wood as my witchy self could carry. It took a lot of material to get things fixed up – better than 1,000 pieces of wood, to be precise – but the house has never looked better.

This little expansion project did reveal a few odd wrinkles in Citadel’s building system. First off, you can’t independently rotate pieces the way you want. Whether they’re floors, walls, roofs, or furnishings, you effectively have to aim yourself in such a way that things snap in to place. It wasn’t a real heartbreaker necessarily, but it did leave me a bit underwhelmed, especially since there were only so many interesting shapes I could make out of these wood pieces.

The second weird issue with house building is the relocation of placed furnishings. You can’t pick up something you put down, you’ve got to destroy it in order to rebuild it. For the most part, it refunds the materials used in the original item’s construction, but there were a couple of furniture items that seemed to short me some iron ingots. Again, not heartbreaking, but it made me a bit miffed, and it also made me nervous about destroying my storage chest. No way was I about to lose all of the stuff inside of that.

All in all, though, the rebuilding went well, and it even got me a new level which got me along the path of unlocking stone building materials. Which have a lot more interesting pieces to them, at least if the floor sections are any indication. Another carrot to chase. Another thing to work towards. Another little goal as I carve out my life here in Ignis. 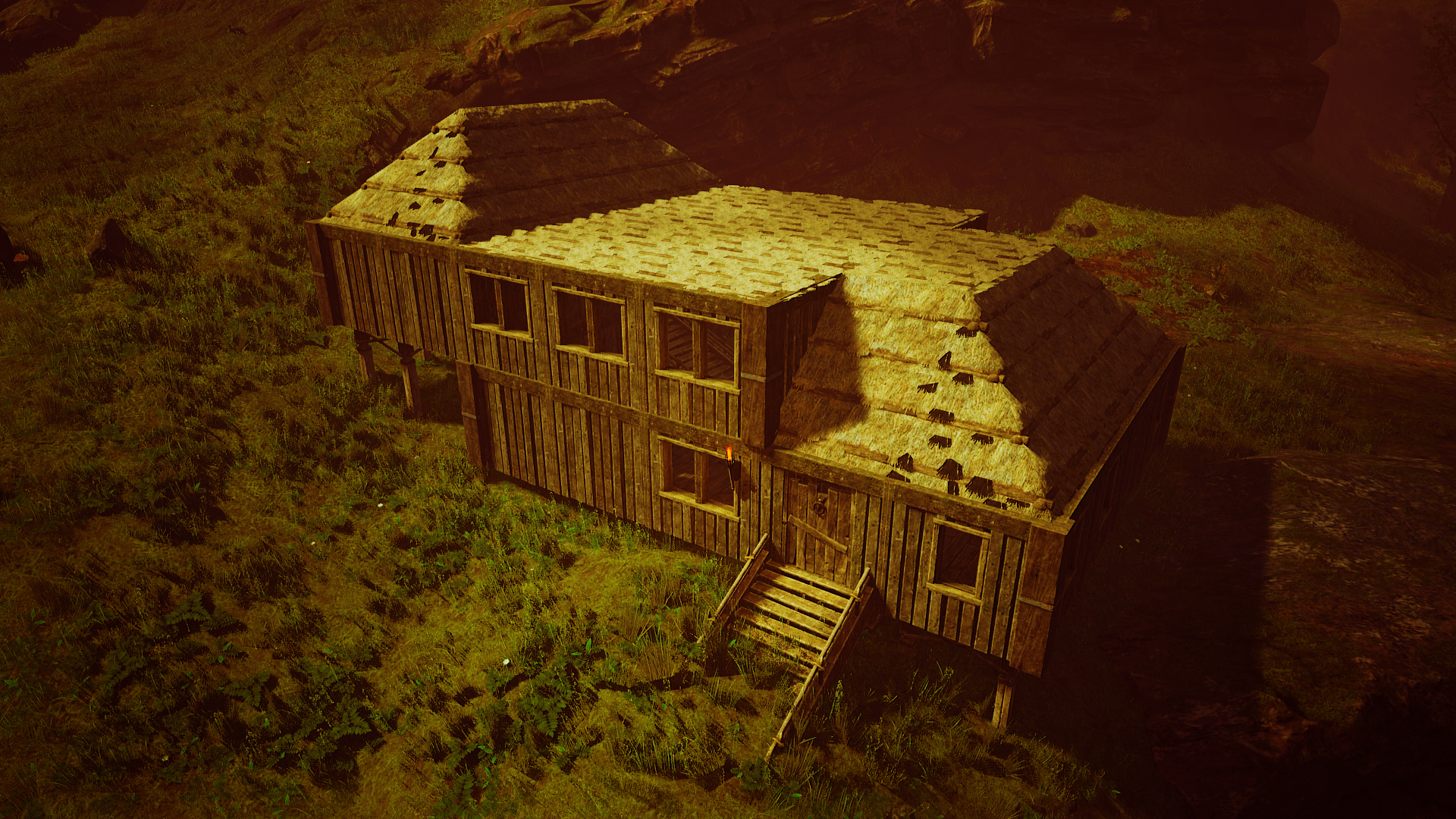 For now, though, that life will not be chronicled here (though I might stream it some more if people care to watch it). It’s time to move onward to December’s chosen adventure, and this time I’ll actually let you fine folks choose the game. This time, I’m looking at a selection of runners-up to choose from, plucked from previous CMA’s in no particular order. They are:

Where do we go next? Choose My Adventure!

Like usual, voting wraps at 1:00 p.m. EST this coming Friday, November 29th. I’ll be back next week with a wrap-up of my time in Citadel, but if you happen to peek into the Blackrock PvE server, maybe we’ll see one another sometime.