While we are still in a holding pattern to know the launch date of Shadowlands, the good news is that you don’t have to wait a single moment to try out one of World of Warcraft’s brand-new zones. With this week’s patch 9.0, Blizzard added the fresh starting area of Exile’s Reach, which is playable right now.

Exile’s Reach is designed to be the mandatory starting zone to anyone coming to the game for the first time and an optional zone for any new characters after that. I took my sweet time going through it on Wednesday night, and discovered a delightful experience that is perfectly tailored to teach players the ropes while also giving us vets some new eye candy and a streamlined experience. 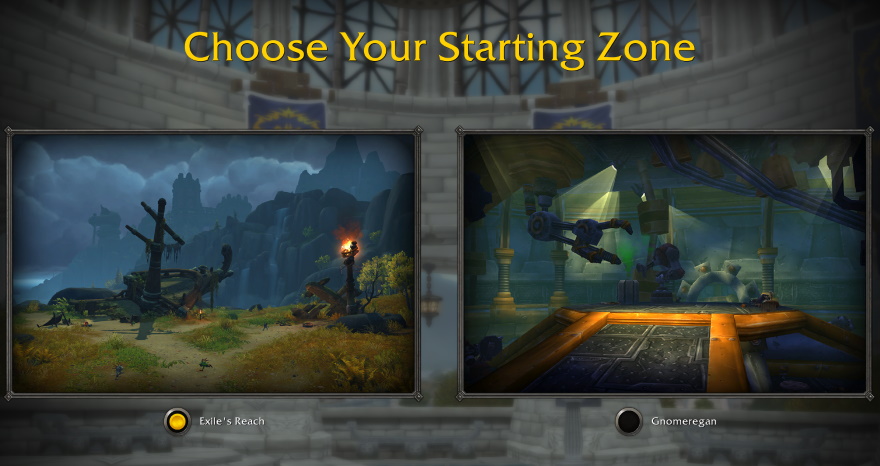 I have to say that I actually got tingles seeing the above screen when I created my new Hunter. For the first time, really, World of Warcraft players get a choice right out of the gate where they want to start their journey that isn’t strictly tied to their race. It kind of gives me the feeling that I have some agency in my character’s background, and that’s something I’d like to see expanded into the future.

The story — for the Alliance side, at least — starts on a boat bobbing its way through the sea. The first thing I noticed is that a lot of the UI is completely missing right out of the gate in order to be gradually added in as players get used to all of the different elements. It’s also hard to miss all of the slick pop-ups and bouncing arrows that tell you what to do. Obviously, this is not needed at all for experienced players, but when I’m looking at this from the perspective of a newbie, I can appreciate that there’s been a lot of work done to create just the right level of hand-holding and instruction without being too aloof or overbearing. 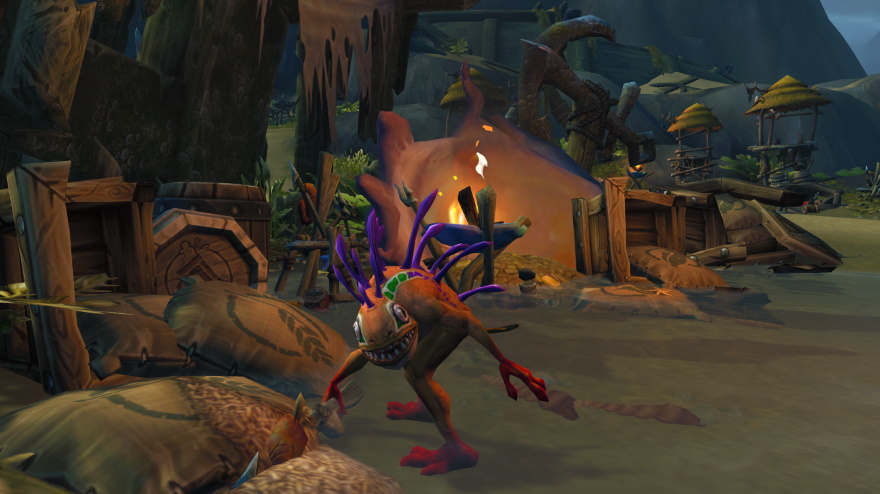 As the RPG trope demands, soon enough the boat is shipwrecked and players wash up on the shores of an unknown island. Fortunately, this is where they were headed anyway on a rescue mission. I did appreciate that instead of keeping new characters isolated and giving them the “you washed up here with amnesia” line, Exile’s Reach makes the player a part of a team. There’s a lot of talk and interaction that happens all around you.

Right away, we get a fairly attractive beach setting with a lot of details to check out, the game’s only non-aggressive murlocs, and some great music. 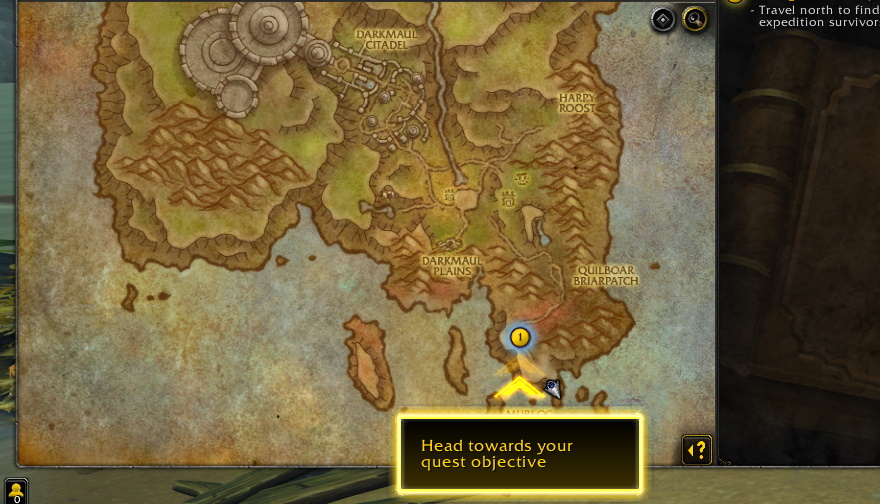 Here’s one example of the helpful UI pointing out how to use the map and what to be looking for in terms of quest objectives. The map itself is actually pretty small, very reminiscent of other starting zones. I think it looks bigger because there are a lot of mountains on the edges, but you can’t go to about half of what you see here. 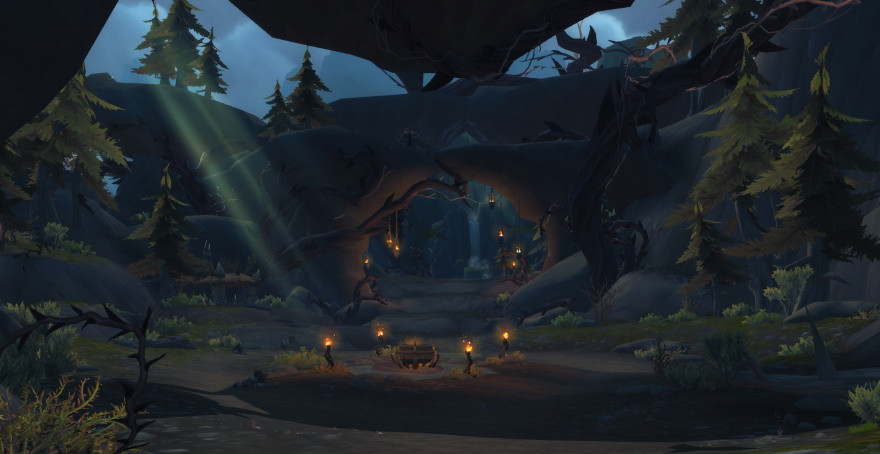 The half you can adventure through is really well done, however. It’s like the creators wanted to distill so many of the qualities of the greater game into this small little area, so we get pretty parts and foreboding sections. The story itself — a rescue mission — is nothing truly epic, but it feels appropriate for characters that are supposed to be level 1 recruits. 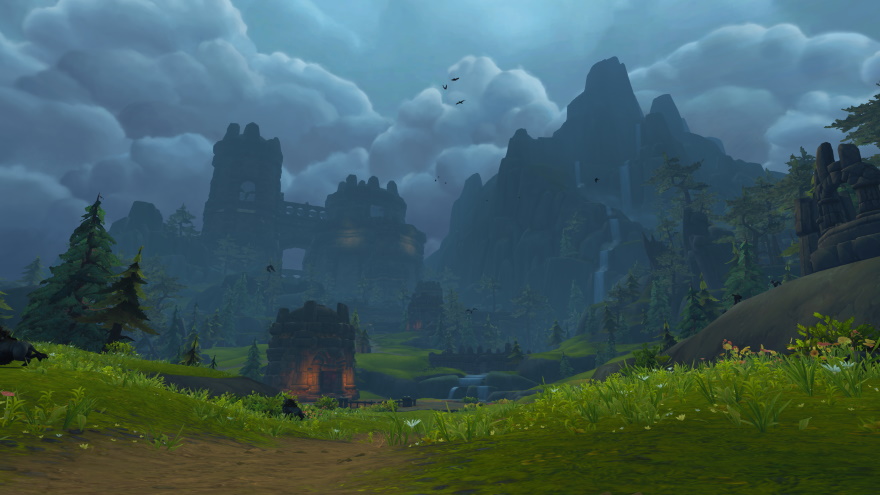 As the zone unfurls, there’s a nice sense of progression across the board. The game feels free to give you more than one quest at a time, it subtly points out treasure chests to plunder, it gives you the opportunity to group up (if you like) to tackle an elite monster, and it tosses in all sorts of questing types.

And you do feel like your character is growing significantly in these 10 levels, too. Every level grants a new skill or two, and the quests feel free to toss bags, gold, and gear your way. I walked out of this zone with greens and even one blue weapon, a full set of bags, and a tidy sum of starting gold. 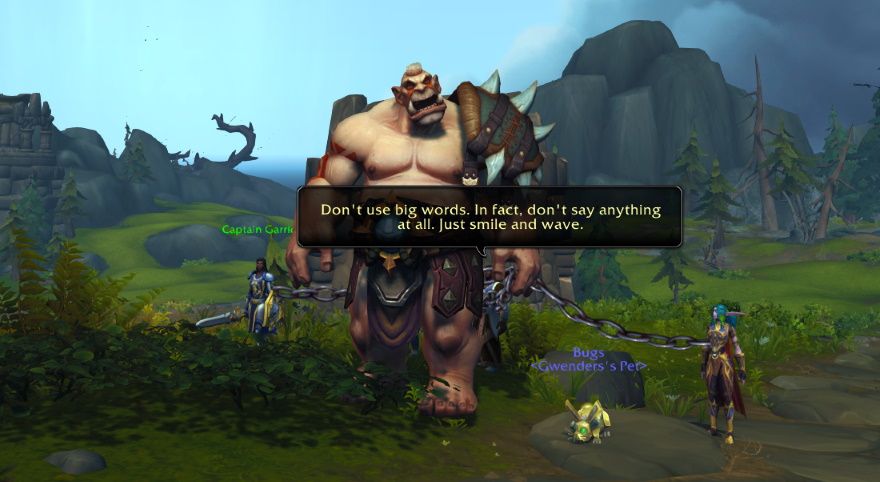 I also liked the use of characters and humor to draw in players. There’s a really funny interchange about Druids and spiders that I won’t ruin for you, but I will say that without making too big of a point about it, you do get a sense of the personalities of each of the major Alliance races here.

The biggest surprise for me lay at the end of this hour-long experience. The rescue mission ultimately turns into an effort to stop an ogre from resurrecting a dragon (who, spoiler, is resurrected). That’s when the game asks these brand-new players to jump into a dungeon with four other people. It sounds intimidating for newbies, but it’s actually not that bad. The dungeon is really basic (just three rooms, really) and doesn’t require any roles beyond DPS. Complete buffoons plunking away on auto-attack should be able to complete it, but even so, it accomplishes the mission of making group dungeons seem less scary and more intriguing to the beginner.

And that’s Exile’s Reach! I really took my time going through it, but I would estimate that you should be able to run it in a half-hour to 45 minutes at most. I’m certainly going to be returning to it with future alts, since it’s easily the most streamlined and modern of any starting experience in the game right now.

I liked Exiles Reach very much, I found it fun to play, the story was ok and all the important things were explained. I will definitely play it again.

The only problem with this though is that you can’t do Chromie Time, it shuffles you right into BFA and Chromie will just sit on top of that hour glass of hers being useless.

you can go from Exiles Reach to Chromie time, provided you are not a new player. You need to ensure that you either complete the stormwind tutorial, or select “I’m familiar with stormwind”. You can then pick up the Chromie Time quest from the mission board, or talk to her to get started.

I’m not a new player, how ever the character was the first on Kelthuzad, could be bugged. Never got the option to skip anything, how ever on character creation they gave me a choice between the racial starting area and Exiles Reach.

I was very confused about how this worked. I started an alt on Exiles Reach, played through on Horde. Was sent to Orgrimmar and the straightaway to BFA, no option was given to choose. I ported back to Orgrimmar went to chromie myself and talked to her, then I was given the option to choose from which expansion I want to level further. I found that not at all explained in-game.

It’s passable. I think making starter zones to be phased zones is bad design, tho.

I enjoyed it. The new leveling experience is light years better than the old. Well done Blizzard…Not something I say often

This was supposedly made with new players in mind.

It gives a new player almost no lore or connection to their character.
It gives no concrete reason as to the lore between Alliance and Horde.
It gives no lore or specifics about the class you chose.
It has no relevance to the story as whole, or the world, or anything.

It’s bland mobo-style trash that doesn’t belong in any game with an “rpg” at the end of its title.

I 100 percent agree with this. Also at this point who wouldn’t know how to play WoW.

Aren’t there non-aggressive murlocs in Legion?

I was playing through with a couple of Allied Races yesterday and they still sent me immediately their actual start zone – does this change on subsequent characters?

I would play and find out, but stuck in a queue at the mo!

Allied races start at a higher level than the new zone. And the player is obviously experienced (Allied Race). Start a new ‘standard’ race character if you want to see the new player experience. :)

Thanks! New to them, only just unlocked a few with the rep requirements being dropped.

It’s a great starting zone. My only gripe is that you don’t get boots to complete the transmog. Infuriating!

I went through this last night as well with a horde trial toon. It felt pretty good and just as described above, but I have little prior WoW experience to judge it against.

Thats exactly who its targeted for… those with little to no prior WoW experience.

The old starting experience was pretty awful for people fitting that category.

It would seem the designers did a good job.