I’m going to be perfectly honest, I went in to Elyon with some pretty low expectations. Watching it be transmuted from Ascent: Infinite Realm, an intriguing steampunk world with what looked like interesting airship vs. airship large-scale PvP combat and a neat-looking world, into what appeared on the surface as TERA 2, I was not really holding much hope for Elyon.

So, with that bar set rather low, consider me pleasantly surprised all the same by how Elyon plays. 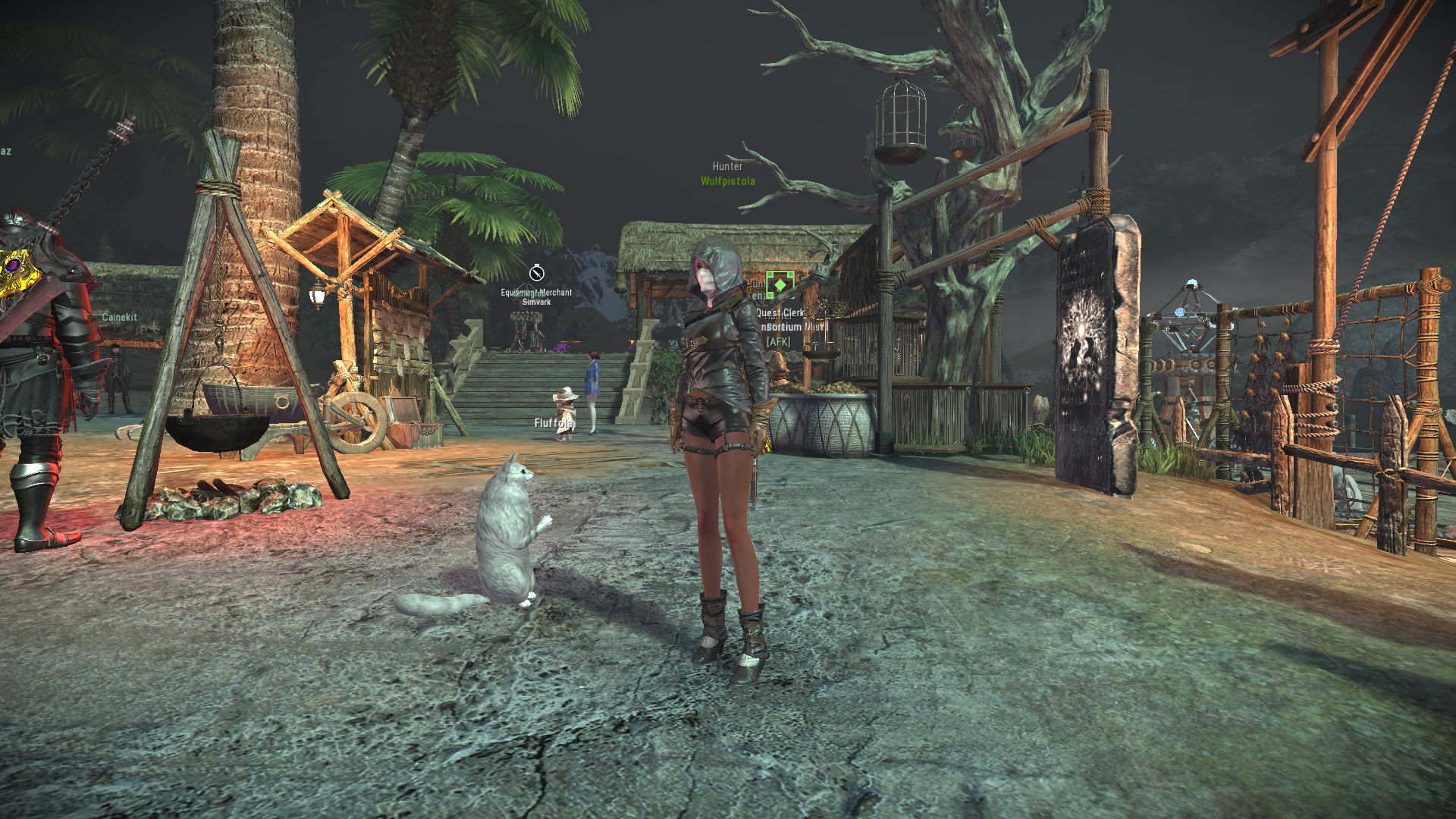 Note that I wrote “how it plays,” which is easily Elyon’s strength. The game’s world and setting is about as much of a letdown as I was fearing, replacing a great deal of the more interesting aspects that were showcased before for your bog standard fantasy world… stuff. There’s something about interdimensional portals, some largely forgettable monsters, and vistas that frankly weren’t exactly engaging.

The game’s story follows some similarly forgettable territory. The titular world of Elyon is, apparently, something that both of the game’s factions want to get to for reasons that are being teased as some great mystery that I don’t particularly care about. I’m also following the Vulpin faction story, which has me helping defend an heir to the throne. There’s also some mysterious hood-wearing dude. And floating cat people. What I’m basically saying is the story and setting are throwaway.

What kept me coming back night after night to Elyon was two things, the first of which is the combat. For lack of a better comparison, this game feels very much like WildStar in its combat model but with mouselook targeting and a few important differences. Some skills paint a shape on the ground to indicate when an effect will go off much like WildStar did, but then there are certain skills that are simply instant line-of-sight or lines or conal shots, or some skills require you to “paint” enemies and then press the button again to engage. It all combines to make some of the more interesting action combat that I’ve seen. A bit like a sequel to TERA in a good way, then. 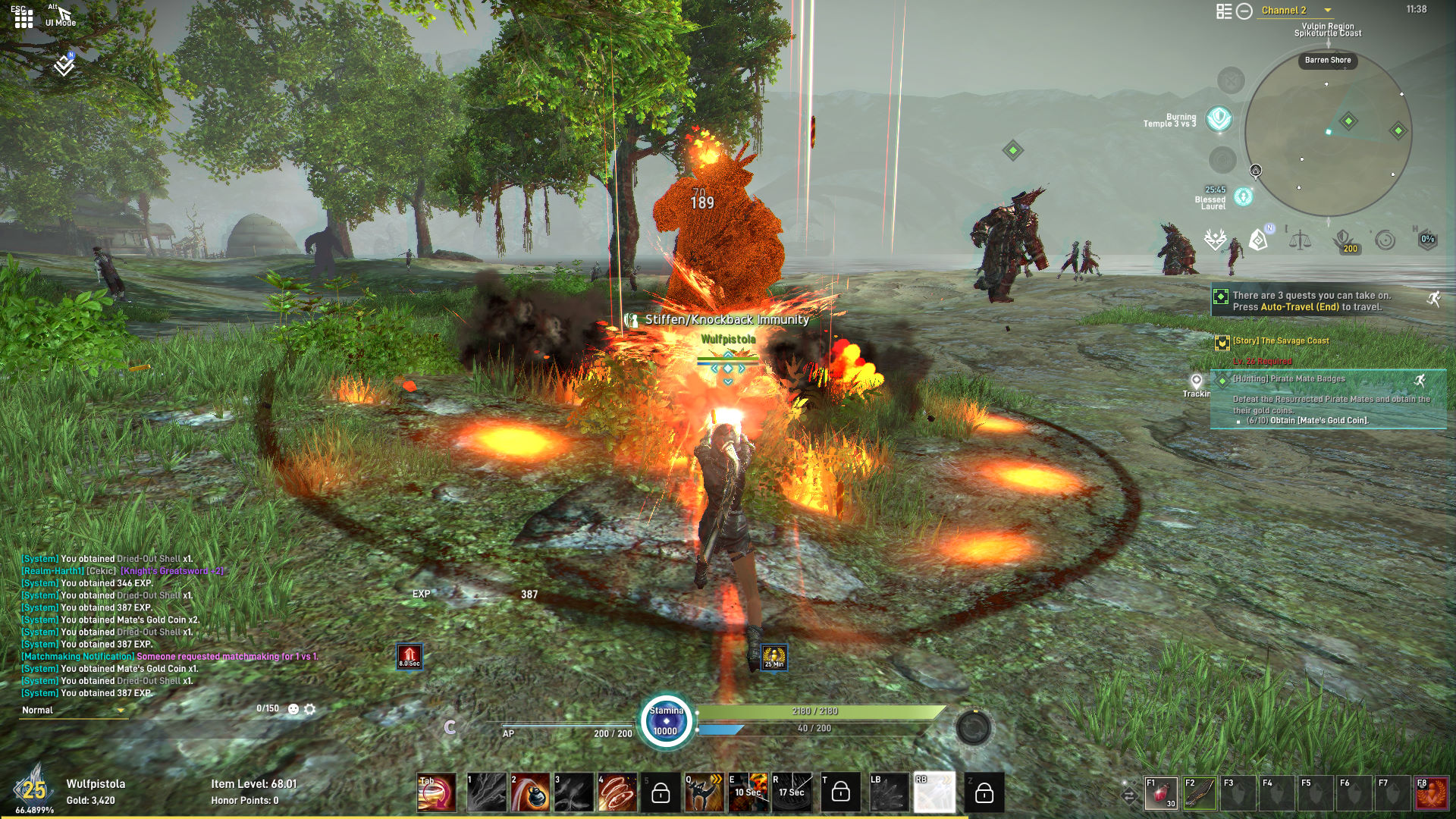 This would be passable on its own, but the other thing that kept me coming back was the absolutely meaty progression and customization systems that Elyon offers. There are some typical advancement systems at play here like slotting gems into gear to improve it, as well as polishing said gems and combining them to improve their grade, but adding and improving those gems awards points that can be spent on passives. On top of that, each type of gem has its own passive tree that unlocks the more types of gems and higher grade of gems that are slotted into gear.

And that’s just the gem system. Skills have their own points system as well, with more points earned by leveling that can be spent to wholesale change how attacks work in four different ways — two of them available from the start and two others attainable as drops or free login reward gifts (at least during this round of beta; whether that will be the case at launch or not isn’t confirmed).

And these are just the things I’ve unlocked so far. There are limited hotbar slots but lots of skills to open up by leveling, and each one feels distinctive enough that creating a class that plays the way you want feels feasible. There’s some sort of Mana Awakening system that I haven’t unlocked yet that opens up another skill slot along with more stat customization. There are ways to improve the tier of gear you have. There is a Breakthrough type of gear that can be equipped which also opens up a new hotbar button and has unique passives. In short, I feel like I’ve just scratched the surface.

All in all, the systems surrounding Elyon are crunchy in the best way, providing what feels like a wide variety of paths for creativity when it comes to character builds. I suspect this will make the game an absolute hellscape to balance for PvP, but in terms of PvE gameplay and the sensation of character advancement, I don’t think I could love Elyon more.

And that’s kind of a problem, primarily because it brings into stark relief how absolutely vanilla the game’s world is otherwise. 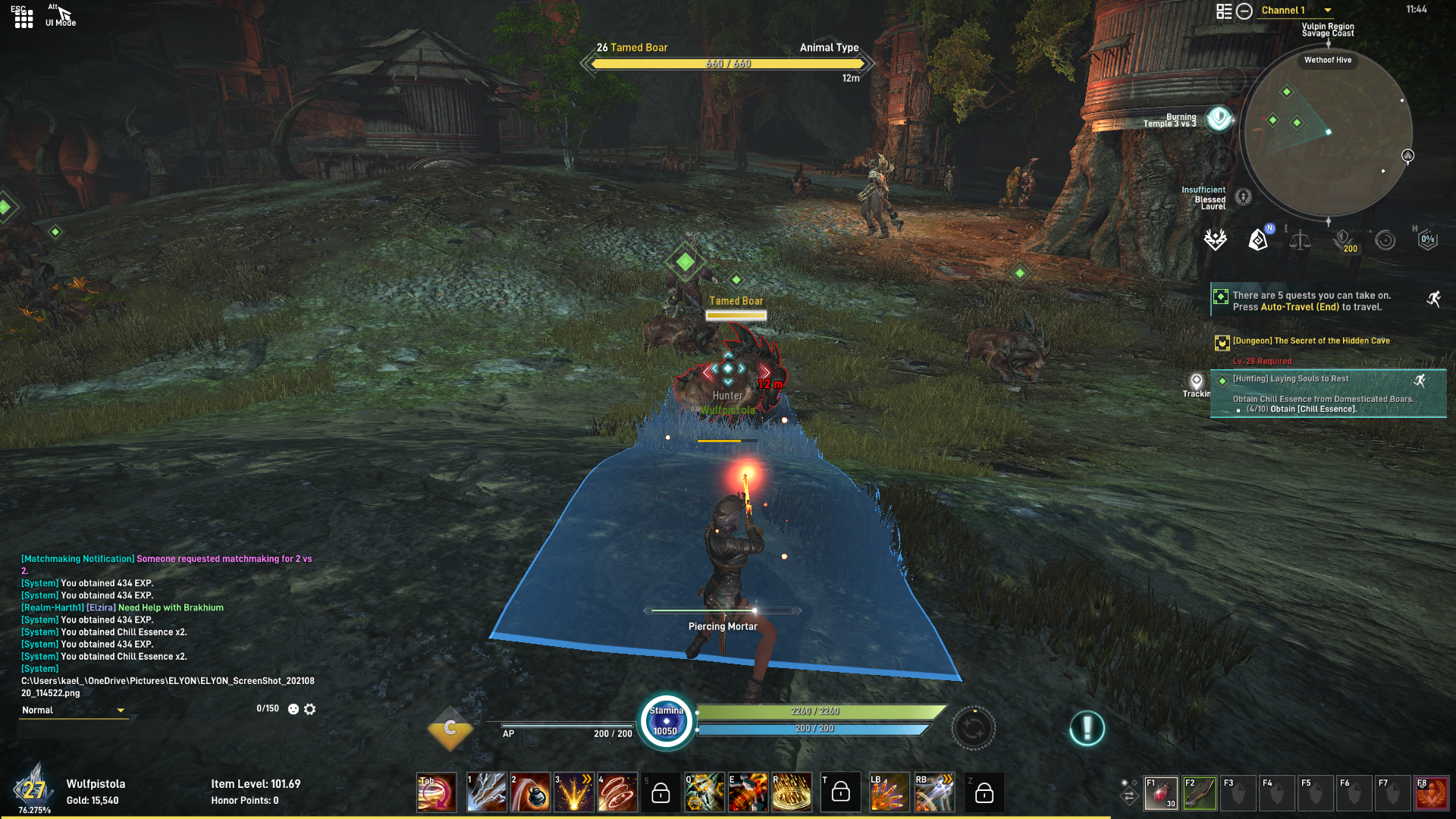 I already harped on the forgettable story and boring visuals, but I also have to point out that the one dungeon I’ve played thus far was very lackluster even if the final boss required me to use interrupts and dodges a bit more intelligently than I had before. There are points where the main quest isn’t available until you hit a certain level, but those are easily gained by doing side quests that you get from an NPC which amount to kill 10s for the most part. There was also at least one world boss that I took down with a few others, which was pretty fun but unremarkable.

As truly intriguing as the combat system and character customization is, the fact that everything else feels like an afterthought is a bit sad. I can’t stop thinking how much cooler this all would have been with the game’s full steampunk aesthetic instead of TERA wearing a top hat with engineer goggles.

There are a couple of other concerns that sort of nip at the back of my mind, too. For example, there are Luminus items that I haven’t unlocked the ability to get yet, but the whole system reads like it could be a huge pay-to-win asterisk if this write-up is anything to go by. Also it should be noted that Rubies were being handed out like candy during my play time, primarily because the devs wanted to test the Ruby Store, so it’s almost a guarantee that they won’t be as generous come the launch; basically, there are some cash shop worries to keep in mind.

Those didn’t stop me from getting that rocket cat mount, though. 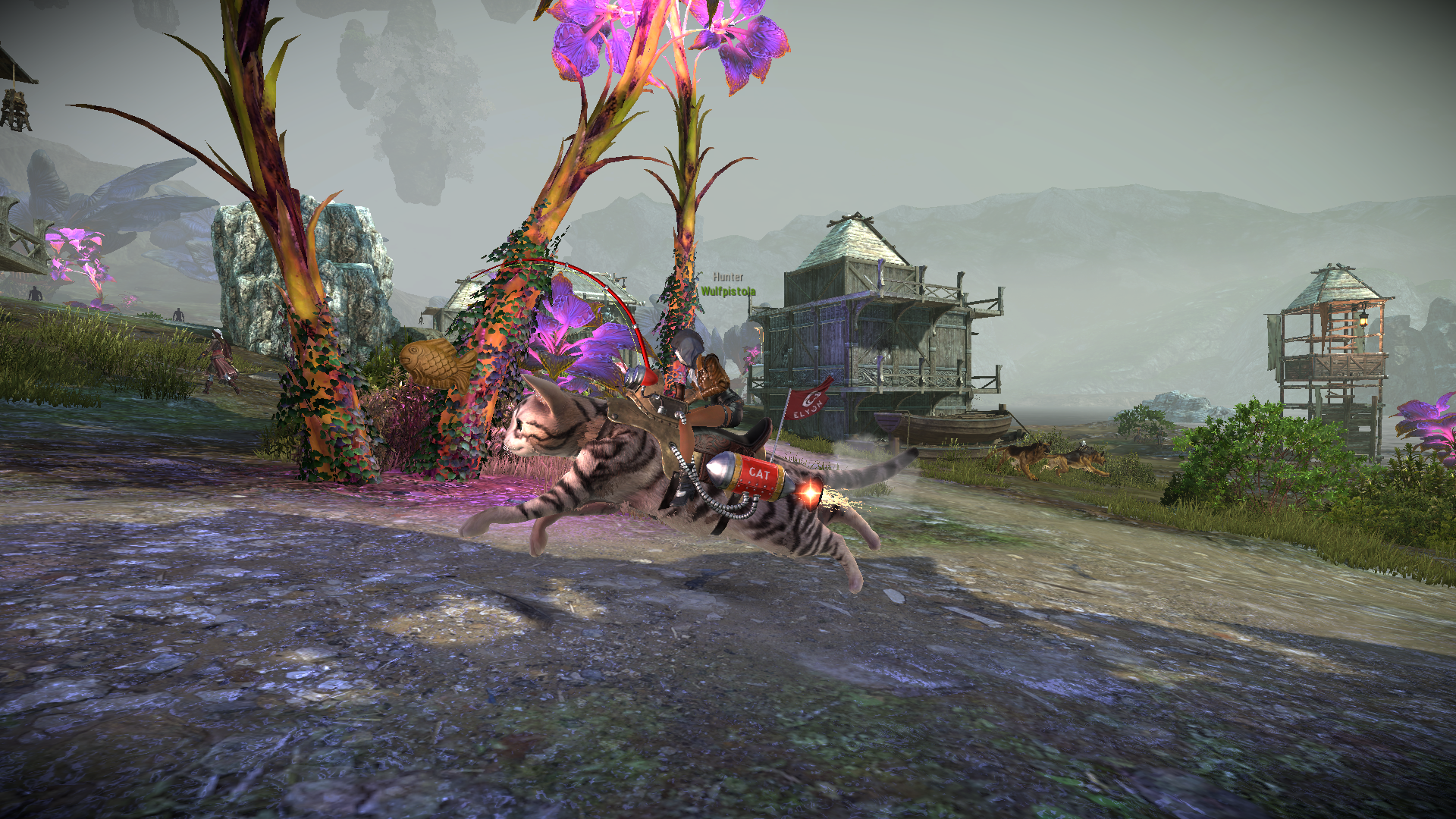 One of the larger concerns I have, however, is with Elyon’s endgame, which appears to have a more PvP slant to it. A quick bit of research seems to suggest that the vast majority of this game’s endgame activities are RvR or large-scale PvP affairs.

This could be interesting as I tend to hide my bad play in larger PvP groups better than if I were singled out 1v1, but at the same time I sort of worry about the aforementioned balancing hellscape as throngs of PvPers wail to the devs on every possible forum to nerf X or buff Y or concede to any number of demands. Ideally, there are PvE things to do at cap as well (and a cursory glance of the game’s world map seems to suggest there are a couple of things), but I couldn’t say for sure.

Despite most of those worries and my general dismissal of Elyon as a world, Elyon as a game is extremely fun. The combat is snappy and enjoyable, and the customization of skills and stats is extremely engaging, toeing the line between ARPG complexity and general approachability though it certainly feels like it leans more towards the former than the latter. To that point, make sure you read the text quests that explain these systems. Trust me on this. 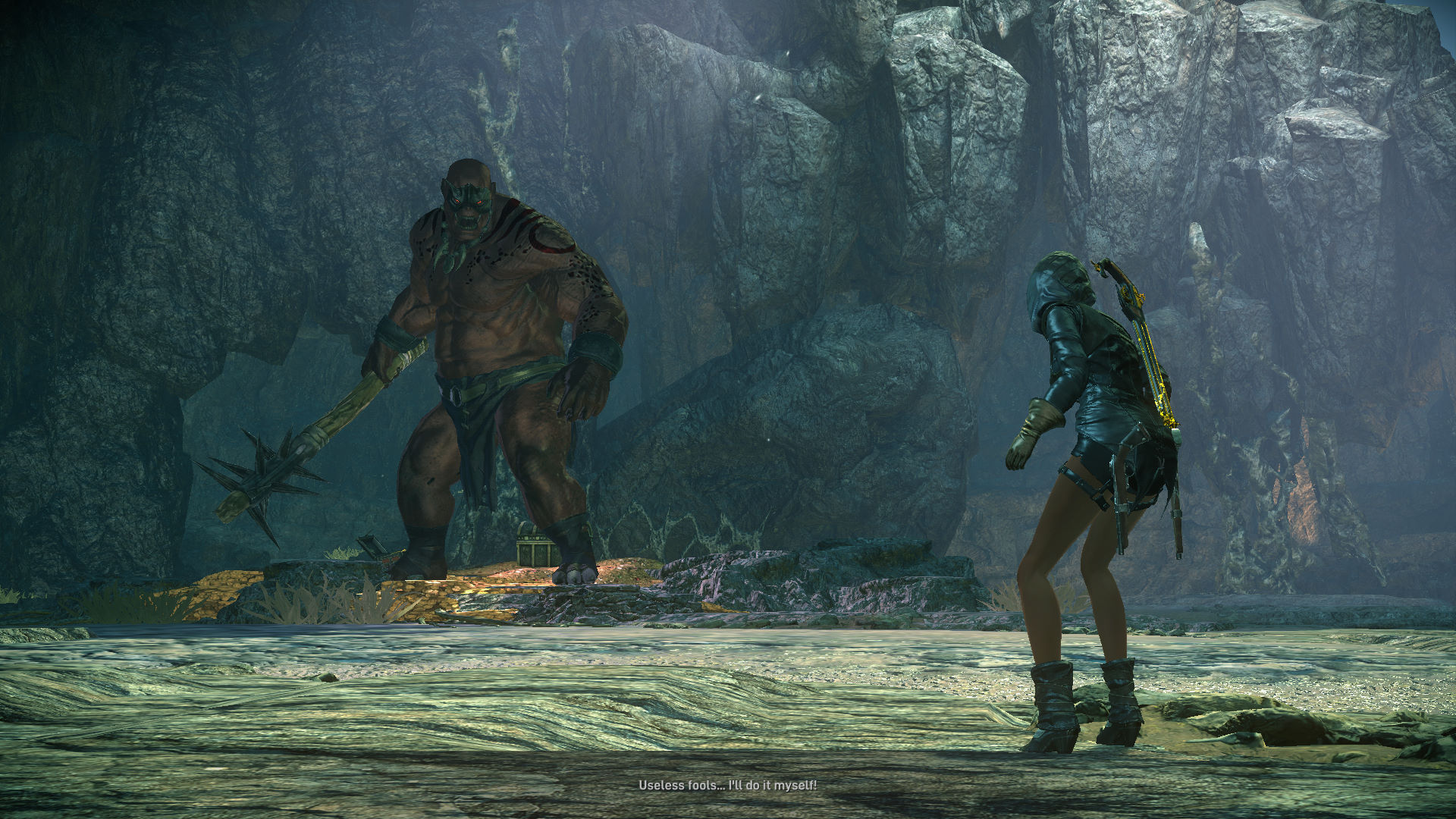 So consider me very surprised as well as intrigued and impressed. I’m very curious to dig into this game more. Just a pity about its setting.

Wisdom of Nym: The powerful stuff in Final Fantasy XIV that went missing in action

Wisdom of Nym: The powerful stuff in Final Fantasy XIV that...