I’ve never been a big Star Wars fan, but I am a big BioWare fan, and after many failed attempts to get into the game, Star Wars: The Old Republic finally won me over after Knights of the Fallen Empire brought the game much closer to the story-driven RPG experience I expect from BioWare. Since then, I’ve played every class story and every expansion, and while I have many gripes with the game, I can rank its stories and characters among some of the best of my gaming career.

I drifted away from the game after the last expansion, Onslaught, but it maintained a fond place in my heart, so I was quick to jump on board when Legacy of the Sith finally arrived, despite the uproar around it in the community. What I found was an expansion that is crushingly disappointing, but not entirely for the reasons that have been offered up by the community.

There was a lot of negative buzz around Legacy of the Sith right from the start. Initially what I heard most in the community was that that UI had been ruined and the classes had been gutted.

Once I got into the game, though, I wondered if I had experienced some elaborate performance art piece lampooning the gaming community because the actual changes to those things are trivially small. 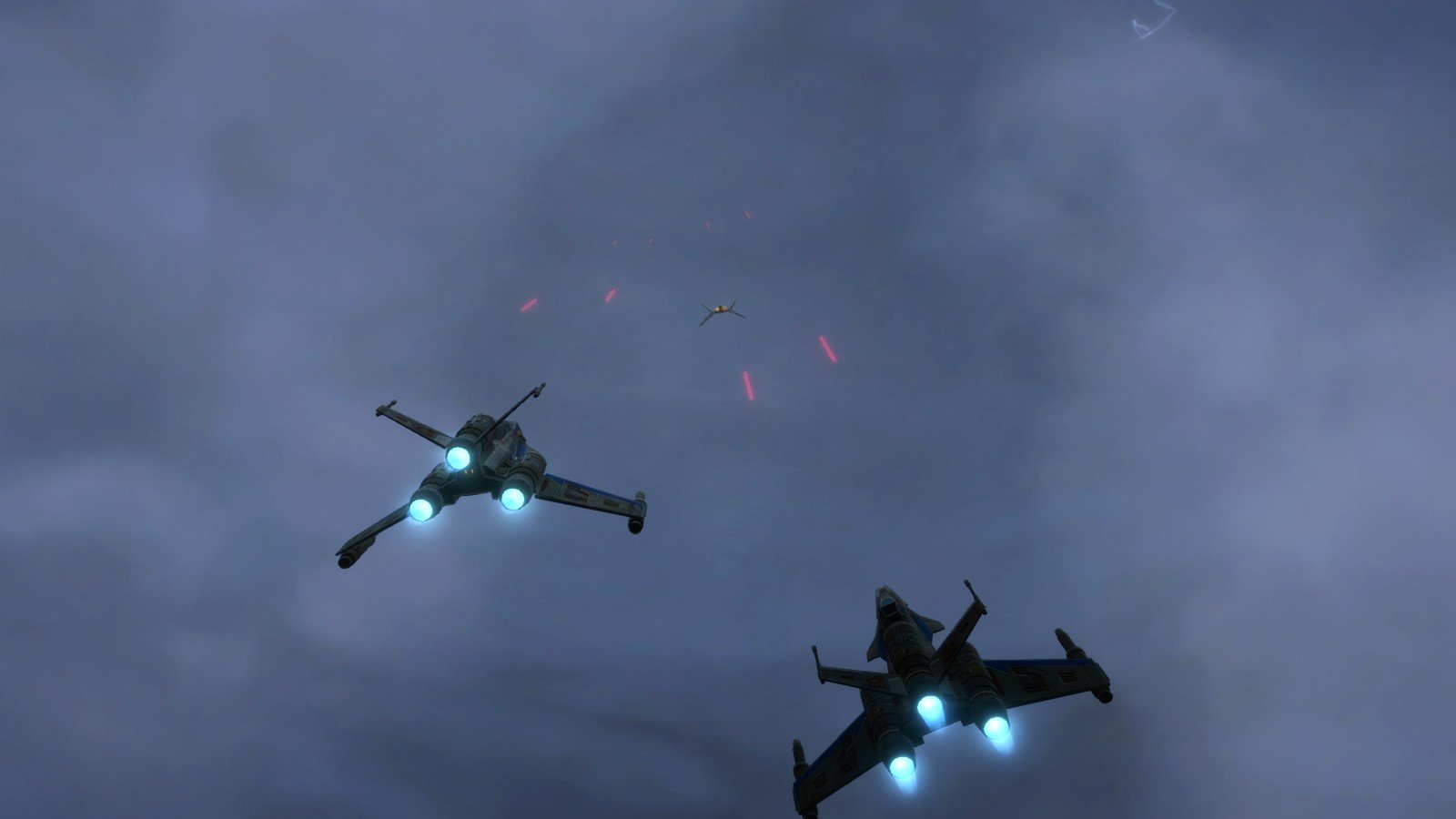 Meanwhile the class pruning was done with an extremely light touch. My main lost only a couple of niche utility skills that I used so rarely I literally can’t even remember what they were. I’m sure some high end players did actually make use of them, but no reasonable assessment of the changes could describe this as “gutting” classes.

Much has also been said of the underwhelming nature of the new combat styles system. It’s one of those strange situations where players unquestionably came out ahead — we gained new options and lost nothing in the bargain — and yet it still feels disappointing.

I think this is mostly down to poor expectation management on BioWare’s part. For months after the expansion’s announcement, it was shockingly hard to find any details about how combat styles were going to work, leading players to fill in the blanks with their own hopes and dreams. Personally, I had the impression we were going to be able to learn every class on one character and change them on the fly, similar to how it works in Final Fantasy XIV.

In reality, existing characters can’t change their current combat style, and only subscribers gain access to a second style, and then only for as long as they stay subscribed.

I have to assume these limitations are due to technical issues because I can’t imagine anyone thinks this is the best way to handle the feature. But it does need to be said that we are still coming out ahead here, even if it’s much less than we hoped for. At least my agent can use pistols outside of cutscenes now. 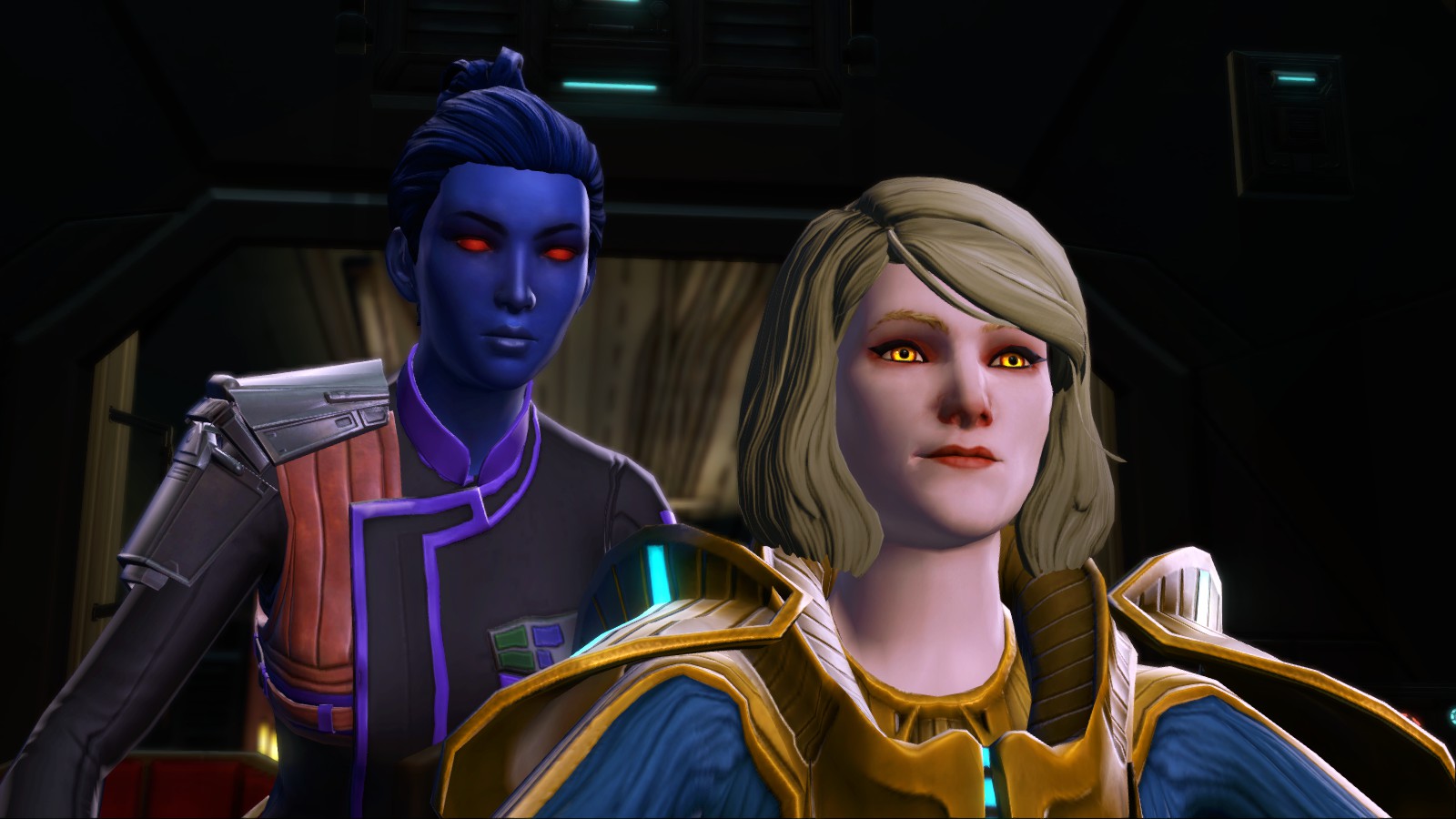 People have also rightly offered criticism about how small LOTS is. It’s so brief it strains credibility to even call it an “expansion.” That said, SWTOR‘s expansions have never been all that meaty, so while it’s disappointing, it’s not really surprising, and if the quality is there, I don’t mind brief. The Secret World‘s DLCs were roughly equal to LOTS in both length and price point, and I considered all of those money well spent.

The problem is that in Legacy of the Sith‘s case, the quality isn’t there. LOTS commits the one cardinal sin no story can ever be forgiven for: It’s boring.

If the quality is there, I don’t mind brief. The problem is that in Legacy of the Sith‘s case, the quality isn’t there. LOTS commits the one cardinal sin no story can ever be forgiven for: It’s boring.
With the last two expansions, SWTOR has refocused on the traditional conflict between the Empire and the Republic. The trouble is, as World of Warcraft has repeatedly taught us, player faction conflicts simply can’t produce good stories. It’s a battle that neither side can win or lose, not even temporarily. The need to support players of both sides forces an eternal stalemate where drama and tension are utterly impossible.

SWTOR ably danced around this in the base game by making most of the class stories use the faction conflict as a mere backdrop for stories with more personal stakes. Bafflingly, Onslaught and Legacy of the Sith ignore this lesson. The whole story is just, “Go shoot those rotten [insert opposing faction here],” all while I am cursed with the knowledge that nothing I do matters. And it’s just. So. Boring.

Even the characters are weak, and I don’t think I’ve ever said that about a BioWare game before. This is usually the studio’s big selling point, the one place it never fails. But after years of building our galactic dream team from the base game through Knights of the Eternal Throne, LOTS is almost entirely devoted to random new faces I have absolutely no reason to be invested in. 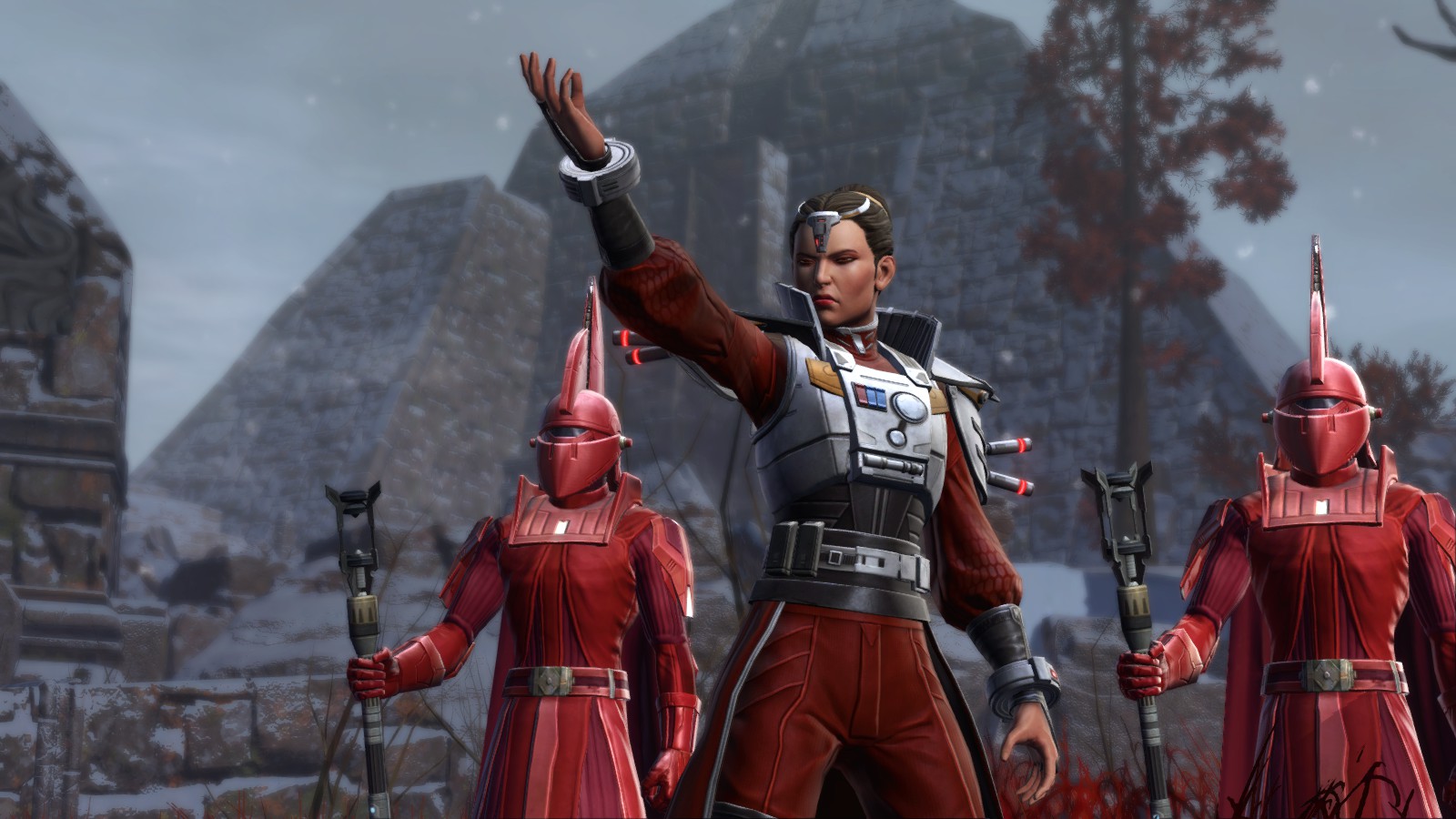 I understand BioWare doesn’t have the budget to bring back every companion for every patch, so they can’t please everyone, but… that’s the point. Why is the team still piling on new characters when it can’t support the cast it already has?

I’ve never really liked the gameplay of SWTOR all that much. The combat is a slog, and the graphics are terrible. I was willing to put up with all that because the story was so good, but with that no longer the case, I’m left to confront just how tedious the game can be.

And I swear it’s doubling down on the game’s worst traits. This game has always loved throwing hordes of trash mobs between the player and any objectives, but there seems to be more of them than ever. On top of that, they’re all massive HP sponges, and nearly every pack now has at least one healer, and usually multiple, just to really drive home that “wading through quicksand” feeling.

Meanwhile, SWTOR has never been an especially pretty game, but great strides had been made to improve things in the more recent expansions, with many of the new planets being rather appealing, if still technically crude. Most of LOTS takes place on Manaan, a very pretty planet that I was happy to see more of, but virtually all of the action takes place in a seemingly endless series of dimly lit grey corridors. Rather than continuing to improve on the game’s visuals, Manaan circa LOTS is the ugliest area yet.

My overall takeaway from Legacy of the Sith is that this is a dev team that no longer has the resources to deliver quality content, and I don’t just mean financially. As a long-time TSW player, I’m familiar with the experience of playing a game made by people who have grand ambitions but lack the resources to fully deliver on them. This isn’t that. 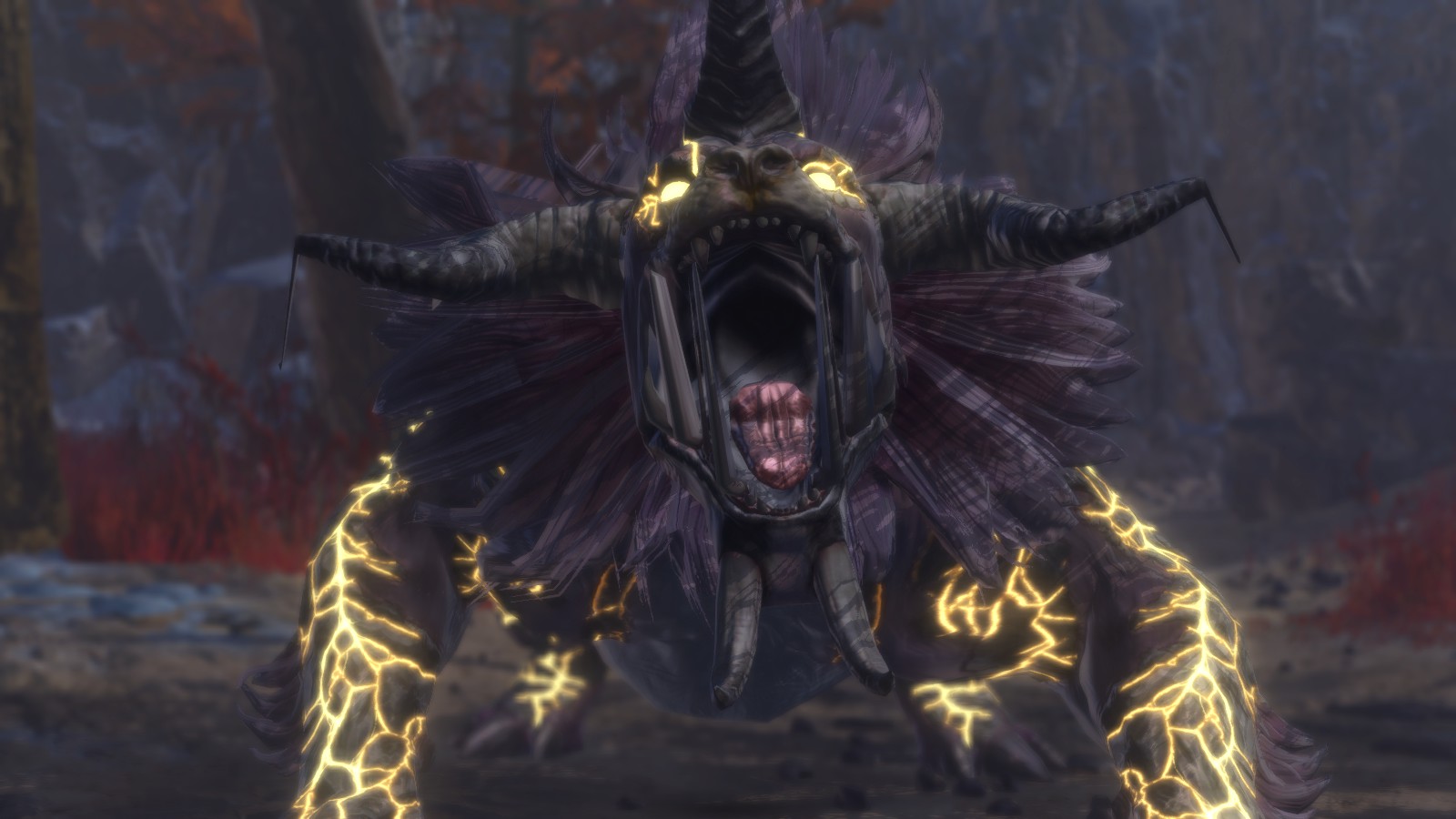 This feels like a team for whom the creative spark has gone out, whether due to low morale, or the most talented people having left, or some other factor. I hesitated to even write this because I try very hard to criticize games rather than the people behind them, but it’s impossible to look at Legacy of the Sith and not conclude that something is very wrong behind the scenes. This game has always struggled in myriad ways, but you used to be able to at least count on the story delivering. No longer.

I won’t say there’s no hope because things can always change. People can learn from their mistakes. Lost passion can be rediscovered. But something needs to change, even if it’s just in terms of mindset – because right now, I fear for the future of this game.