(We’ve updated this post at the end with the latest counts and info.)

EVE Fanfest 2022 in Reykjavik is barely over, and the first cases of COVID-19 among attendees have already started to emerge. At least two people who were at the event have reported testing positive, including famous EVE Online player Charles White, who plays the character of Space Pope Max Singularity. Charles posted a tweet with a video showing his positive lateral flow test in order to warn attendees who have been in close contact with him that they may have been exposed.

END_OF_DOCUMENT_TOKEN_TO_BE_REPLACED
This year’s Fanfest was CCP Games’ first in-person event since the pandemic began and was originally pitched as a COVID-safe event that would require proof of vaccination and follow all other local guidelines. But that requirement was dropped earlier this year when Iceland began removing its COVID safety restrictions in the middle of its Omicron wave, meaning Fanfest lacked vaccine, masking, and social distancing requirements. Instead, CCP’s stated health and safety plan to protect attendees from a virus transmitted by airborne aerosolized particles was to provide hand sanitizer and “encourage [attendees] to be mindful of other people’s personal space.” Case counts in Iceland itself have been relatively low this spring, but of course Fanfest drew hundreds gamers from all over the world, including countries like the US currently experiencing a rise in cases in a pandemic that is still very much not over.

They say I’m a positive person!!

There are inherent risks right now in any international travel or in-person events, but obviously we hope Fanfest doesn’t lead to a major outbreak, especially given the recent devastating news that a PAX staffer died after contracting the virus at PAX East this year. Attendees travelling to the US or Canada are required to provide a negative test result before they can board their flight, so this could disrupt some people’s international travel plans in addition to the obvious health risk. Here’s hoping the Space Pope and everyone else has a safe trip home and speedy recovery.

Disclosure: In accordance with Massively OP’s ethics policy, we must disclose that CCP paid for our writer’s travel to and accommodation at this event. CCP has neither requested nor been granted any control or influence over our coverage of the event. At least this isn’t like the time I gave everyone at EVE Vegas the flu.

EVE Fanfest 2022: All the major EVE Online announcements from Fanfest

EVE Fanfest 2022: EVE Online is getting a Spanish client

EVE Online shares a ‘megablog’ of details, events, and schedules for its upcoming Fanfest 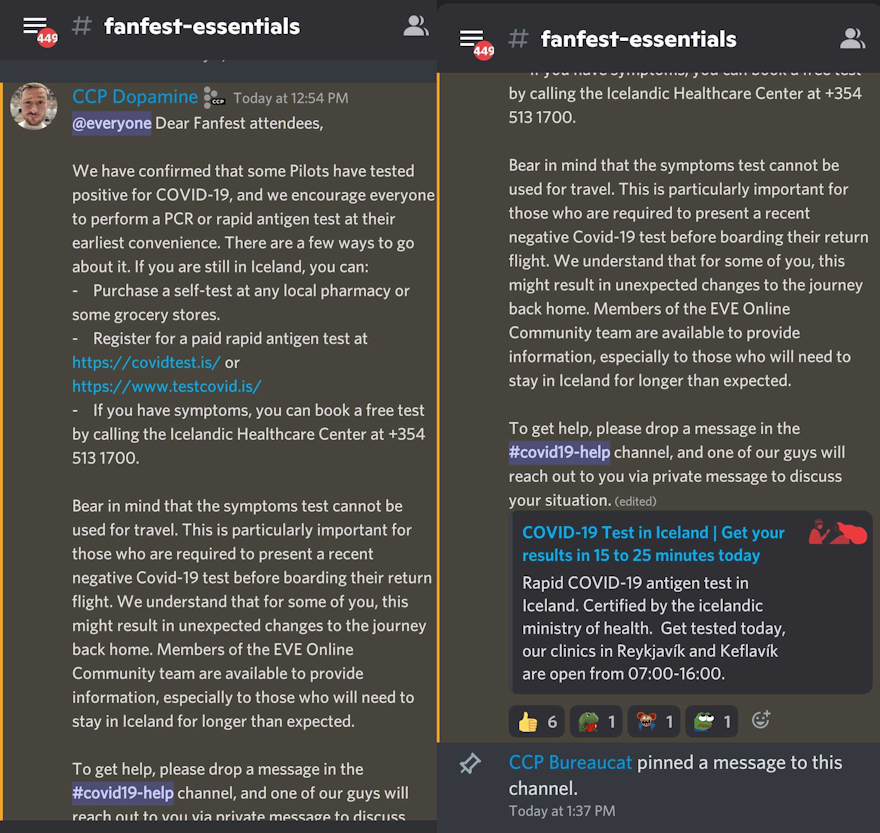 Hey all, looks like the space pope and dunk aren't alone. I tested negative on Sunday but just got home and tested positive. I have 0 symptoms so even if you're not sick remember to get tested #tweetfleet pic.twitter.com/zU2n25kYEe

Listen up #EVEFanfest people. I tested Negative on Saturday for COVID, but when I got home tonight I tested again and am now Positive. Feel like I have a cold. Please get tested if you were near me this weekend.

It also appears that at least one informal Fanfest-adjacent event (at the Ice Bar) scheduled for this evening has been canceled by the organizer.

I got the vid, feel fantastic though. So please make sure you get tested even if you have no symptoms. I knew what I was getting into and now I have to figure out how to obtain food lol.
have a safe flight home!#tweetfleet

Well after two years+ I finally have Covid, just got the test results back and I’m positive for the virus. So far so good, mild flu symptoms #tweetfleet #eveonline 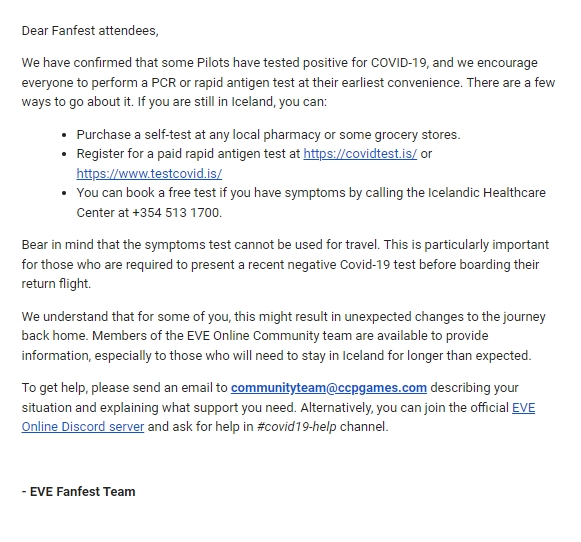