END_OF_DOCUMENT_TOKEN_TO_BE_REPLACED
I see something coming in the future… something that will be of interest to Path of Exile fans. And it will arrive on June 3rd. It’s the big mid-expansion update! Called Path of Exile: Prophecy, this big content release and beginning of the next challenge league launches in two weeks. As the name might suggest, Prophecy has a fortune-telling theme to it, brought to life with new mechanics, new items, and a new NPC. I gazed into my powerful crystal ball, calling upon all of my future-reading abilities (read: sat down with Producer Chris Wilson) to learn about what Wilson called a “mini-expansion” companion to Ascendancy. See what your future holds in Prophecy!


The next big league

I’ll readily admit: I didn’t really try any of Path of Exile’s various challenge leagues before this latest one, the Perandus League. The idea of always starting over was a hard one for me to swallow, but after getting in and experiencing the special nuances, I’ve come to quite enjoy it. And this next league sounds quite intriguing.

The league is centered on a new NPC, the fortune-teller Nevali, and her furry companion, the monkey Yama the White. A Karui Soothsayer, Nevali was raised from the dead as a revenant in the service of Hinekora (the Karui Goddess of Death, Decay, and the Harbinger of Danger), and she’s been instructed to grant glimpses of the future with the living. Why? As Wilson noted, so those living will “live wisely and gain knowledge that can enrich the Land of the Dead upon their deaths.” For the price of silver coins, the special currency gained in this league, players can have their fortunes told. The coins themselves are found on mobs while adventuring through the game; in general, one coin will be hidden on one random mob in each zone, so players may have to clear the zone in order to acquire it. 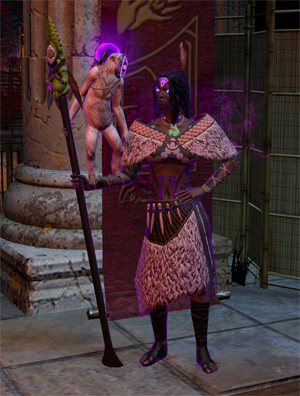 These fortunes, or prophesies, are special events that players will encounter sometime in the future. It can be a special encounter with an uber boss, a zone flooded with a plague of rats, or even a guarantee of a certain item when crafting. There are over a hundred different encounters that can be prophesied. There is no special place to go to have these fulfilled; the zones will randomly change to fulfill the prophesy for the player.

All prophesies are voice-acted, and some are actually story chains. Players can receive the next step in a chain after completing the step they are on. Completing the story chain generally grants a special unique item. However, four of the prophecy chains are related to the “Pale Council,” and completion of each of those grants one quarter of an item that when combined lets the player encounter the entire council itself! Note: One set of keys will unlock this encounter only once, and even though a full group can go in to the fight, it will drop only one reward.

Players can have up to seven active prophesies. But what happens when player gets a prophesy they really don’t want? For the price of some silver, Nevali can bind the prophesy into an orb that can be traded or sold to others, or even saved in your bank for a later time. Folks who are eager to level up certain Forsaken Masters will definitely want to be on the lookout for those prophesies that accelerate this process!

Gotta get the gear!

Wilson said that his favorite part of Prophesy is the gear — namely, that items that players once thought of as junk will actually become quite powerful. He illustrated how it’ll work with Bramblejack. This one chest item is a low-level unique that players don’t find very useful at all. However, there is one prophesy that requires a player to defeat a difficult boss while wearing it! The reward for doing so and succeeding is getting an impressive upgrade to that piece of equipment, making it suddenly not just very viable but definitely desirable. Basically, stuff that was written off as junk can become very valuable. These are called fated unique items.

Another item that players may be eager to get their hands on is that little fuzzy monkey! Players can earn it as a pet for completing challenges — 36 of them to be exact. As much as I want that pet, I am pretty sure I cannot play enough in three months to earn it, but I am sure going to know who is extra dedicated when I see that pet scampering along behind someone!

A new level of labyrinth

Not all of the new content is limited to the fresh league servers. For players who may feel like they have mastered the current Lord’s Labyrinth, Grinding Gear Games has something for you: an endgame labyrinth. Prophecy introduces a fourth level to the labyrinth, with six all new trials to face to earn the right to enter. These new trials are harder, longer, and teach new mechanics that players will face in this fourth level. Want a hint about a new mechanic? Let me introduce you to the pop up trap that shoots up from the floor. While players can suppress it momentarily by damaging it, it will quickly reset and be ready to cause more grief for those who aren’t careful.

The endgame labyrinth also offers endgame rewards. To start, the first time players completes this level successfully, they will be granted two additional ascendancy points, making a total of eight available. On that trip as well as all other competed trips thereafter, players can enchant their helmets with a top-tier enchantment from the newly introduced set.

Besides the league and the labyrinth, there are also other improvements that come with update 230. The most notable are the performance improvements and the better sound engine. Wilson said that memory management is improved significantly, allowing the game to be run on even more machines. Where players will see the biggest difference is on loading screens between level; he noted that on his own laptop, loading screens that took 20 seconds were now taking only three. He added, “In some cases it was a big difference: On slow computers at the office we measured two plus minutes to load the game, which is now cut by seven times.”

There are also new skills and a new melee totem. I am personally looking forward to the Witch’s ice bolt which will allow certain ice skills to be thrown as ranged. Maybe prophecy will convince me to break out of my fire-flinging… but I am still going to play a Witch. Bring on the future!

That new totem skill is a stark reminder of how far from the initial concept the game has moved.

Back when it launched, one of its big sellers was that you could take a skill gem and then use support gets to alter the mechanical behavior of that skill. More projectiles, area damage, etc etc etc.

Now instead they keep adding new skills that are basically old skills with a support gem built in. This because after adding cast on crit as a support gem, their game basically devolved to spamming one fast hitting skills, cyclone being a classic, that then sets of one or more cast on crit supported projectile skills.

End result is that every damn high end video or stream looks like a explosion in a fireworks factory.

In essence, nobody bothers with altering one skill to do something different, when they can make one skill trigger “moar daka”.

ScottRondeau Given how their last few releases have been, i fear it will not be worth the hassle.

heliaxb That only the 1% of the 1% will ever play…

But is there pants in the game yet…

Shweet, looking forward to it.

1 extra difficulty for the labyrinth…