END_OF_DOCUMENT_TOKEN_TO_BE_REPLACED
Change is inevitable. And while it can be unnerving, it can also be very beneficial. ArcheAge’s fans will see their share of changes today as the big 2.9 update hits live servers. Dubbed Ascension, this update ups the political game by introducing nation building and player factions. It also brings new world and dungeon bosses, a new specialty storage property (my packrat heart leaps for joy), castle strongholds, new furniture items, tier 7 obsidian gear, and an equipment encyclopedia to help players plan upgrades.

That all sounds pretty interesting, but I’ll admit that the one aspect I am most intrigued by is one that I will never get to experience on the lives servers — the dragon mount. So when I was offered a tour of Ascension with Producer Merv Lee Kwai, I crossed my fingers that I would get to see the wyvern up close. I wasn’t disappointed; I even got to watch one hatch! I also got a good look at a Nuian-style castle stronghold, met the new bosses, and learned about the special welcome back promotion that ArcheAge is running in honor of Ascension’s launch. 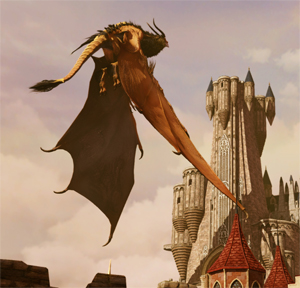 A date with a dragon

I’ve never been one to want to conquer everyone, but now that the sovereign of a nation gets to raise and use a wyvern for a mount, I am tempted. Considering that there can only be four nations on a server, I highly doubt it will ever come to pass, so I was grateful for the chance to hang out with one when I could.

I was already impressed by the thought of dragon mounts on the server, but seeing it up close was even more impressive. This creature is massive! Meeting this creature in battle — and yes, it is built for battle — is apt to instill at least a few tendrils of terror in the hearts of enemies. It is bigger than a 16×16 house and simply towers over players. It is also the only mount in game with ascending flight. The wyvern does siege damage, breathes fire, and has a base health of 100K, making it a formidable weapon during a Sovereigns attempt to conquer more land. Kwai said, “It’s kind of like riding a raid boss.” However, sovereigns need to be mindful of when they use their mount; the wyvern can be used only three weeks out of the month and must rest for the fourth. It would certainly be bad timing for the wyvern to be on cool-down when you need it helping to defend your castle!

I may never be a sovereign and own my own wyvern, but I could possibly ride one — the wyvern, not the sovereign. Wyverns seat two people, allowing the owner to grant rides either for fun or for battle. (Fun fact: The sovereign can also toss coins to his subjects from atop the mount.) And while I’ll never own one myself, I’d be up for helping someone acquire their wyvern. The whole thing takes a significant amount of time — about a month and a half — and resources, and will need the help of the whole nation. Part of the process involves feeding specific trade packs to the Holy Cow, who then gets fattened up and becomes breakfast for a hatching wyvern. (I seriously just want to be able to say I fed the Holy Cow!) The actual hatching is also pretty neat and worth attending if you get the chance. That little baby dragon is flipping adorable; you better believe I lobbied for having a baby dragon pet to follow me around; I’d so pay for that. Devs have actually discussed how to have a different version or something, the goal being to not lessen the special nature of the actual wyvern.

As a fan of castles, I enjoyed touring around the Nuian stronghold. Like the housing on the continent, this architectural style is pretty much like your typical European medieval castle. It was quite beautiful, but more than that it was very functional and defensible. Enclosed in this particular castle stronghold’s walls were a diplomacy building, farms, workshop, and storage silos, all working to build the nation’s wealth. “The basics of the castle system,” Kwai told me, “is everybody working together in this RTS-like format of gathering resources and then transitioning those resources into material and then currency.”

Politically, things are going to get interesting once nations start cropping up. Will all four lords of the Aurorian areas try to ascend to a sovereign with their own nation, or will some ally together under the banner of another? How many will be content with their own holdings, and how many will want to expand? Since a sovereign can still only own one castle, so if s/he conquers another, someone else form the guild will have to become lord of that castle.

On a slightly different note, since a nation can be made up of races from either faction (with the exception of pirates) and can try to ally with one of the NPC nations, just bumping into folks will be a bit odd. When allied, all those within that player nation have full and free access to the NPC one, so you might see Firran strutting safely through the streets of Two Crowns, or Elves running trade packs worry-free to Solis Headlands. In order for an alliance to be made, player nations have to petition the Heroes Council of the NPC nation. This council of players then votes on whether or not the alliance is granted. Petitioning is on a weekly cycle, so if a nation wants to switch alliances, it won’t be instantaneous. The council can also break the alliance, bringing more political maneuvering to the game.

Not everyone may be into the political part of the game. Perhaps you just want to slay a boos and load up on loot. if that’s the case, the two new bosses may intrigue you. First up is a new world boss, the giant tree Kadum. Kadum spawns at the end of the Mistmorrow PvP battle and requires everyone who was just fighting to suddenly work together in order to defeat. When that tree gets chopped down to size, all participants receive a reward (which could include the items needed to craft the tier 7 obsidian gear).

Another boss, Taris, is being added to the Bloodsong dungeons as well. This one will become available when the other three bosses are defeated on hardmode. Kwai noted that this is “probably the most difficult five-man boss in game.”

Come back, get gifts

As with both Bloodsong and the update before it, Ascension comes with a welcome back promotion geared to entice players back to the game. The good news is that it doesn’t matter whether they’ve been gone for months and months or just hours, everyone gets the goodies. Besides consumables and such, this pack will grant folks a full set of celestial-grade, soul-forged gear with accessories. With a gear score of 3.5 to 4k, this will definitely help folks get back into the game at a level closer to the new content. Current players benefit from this set as well, as they can either upgrade their main set, nab a free set for a different build/spec, or even gear up an alt. Just be sure you have at least 22 inventory slots open — that’s how much gear is dumped in your bag!

On top of that, players can select a 30-day version of any one of the mounts that were previously available in the marketplace. This mount can be made permanent for the cost of 40 crystals, which are earned doing daily objectives throughout the event. For the event there is also a new tree mount that can be bought with loyalty points or randomly found in a new chest on the marketplace.

There is one catch: Returning players need to join a guild to get the goods. “If you are returning to ArcheAge, it’s our goal to get you in a guild,” explained Kwai, “because I think it’s best experienced with friends and through that community aspect.” As such, the homecoming guild box can only be opened when you are a member of a guild. Current players, however, avoid this requirement; the legacy crate they receive gives the items regardless of guild status.