Those who follow my columns here know that I’m a big roleplayer, but I don’t exactly roleplay in the Elder Scrolls Online. I love the setting and the stories built on top of the Elder Scrolls universe, but roleplaying the way that I like to takes time that I just can’t devote. However, there is a rich roleplay community in Elder Scrolls Online, and I really wanted to dig into it. That’s when I was introduced to a YouTuber and roleplayer who calls himself the Human Floyd.

I have referenced his work before, but I never really got a chance to talk to him personally. So when I sat down with him recentlt, I asked him the normal questions about where he came from — like how he started roleplaying on Neopets’ forums at about 12 years old and that his first MMORPG RP experience was in World of Warcraft. But the conversation turned really deep really fast. We talked about what attracted him to Elder Scrolls Online, what roleplay means for MMOs, and why developers should spend more time focusing on this community.

Here is a section of our hour-long conversation that I think really touches on the greatness of roleplay.

Larry: What attracted you to ESO?

The Human Floyd: It’s Elder Scrolls with other people, which I think everybody wants. I had a feeling that the roleplay community was going to be awesome because Elder Scrolls is a lot deeper than your other high fantasy settings. Roleplayers, 90% of the time, are deep thinkers. It’s no surprise that is was a very cerebral RP community, which I really like.

What prompted you to make videos for roleplayers?

Nobody else was doing it. I think that MMO roleplay doesn’t get as much credit as it deserves because everyone always talks about Dungeons and Dragons pen-and-paper because it’s been around so long. That type of roleplay is pretty well known. I think there are just as many MMORPG roleplayers out there, but you just don’t hear about it because it’s an obscure topic within an obscure topic.

Other people obviously saw the same things you did, but what was the major encouragement for you to make videos?

I feel that the hobby is growing, and I feel that making videos is the perfect thing to help it grow. If people cannot be roleplaying but can still access roleplaying-related content, then that’s enough to keep people interested. And I really deeply believe that roleplay is a really useful thing for people to do. It makes you step into somebody else’s shoes; it makes you look at things from other perspectives besides your own. Not to make it sound too important, but I think that’s a very useful thing for people.

I believe it’s useful, first of all, because it’s an art form. That can be a pretty controversial thing to say about gaming, but personally, I believe that it is an art form because you’re writing. If writing a book isn’t art, then roleplay isn’t art. But I think that both of them are. It’s more than just sitting there by yourself coming up with stories. Your story is affected by other people’s stories. So not only are you being creative, you’re being collaborative. Those are two very useful things for a person to experience. 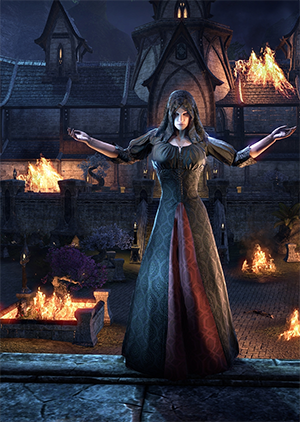 What do you think holds people back from this kind of playstyle?

You have to be vulnerable to do it. For one thing, nobody’s good at it at first. Everybody is terrible when they first start roleplaying. And nobody wants to be bad at something, so that makes people anxious. A lot of us have been gaming since we were a little kid. We can pick up any game and just get it pretty quickly. But this is a totally new skill that you’ve never practiced before that can — yeah — be challenging. Again, you are vulnerable because you are opening yourself up creatively. As opposed to sitting there blasting away, you have to think; you have to try a little bit harder.

What kind of skills or desires do you think people need to have to jump into roleplay?

I think that a lot of people jump into roleplay when they first start as an escape. But then I think that other people are people who really, really like the setting they’re in. So they want to feel like they are more in that setting. So they think, “What’s it like to be a person that lives in Tamriel?” You can kind of experience that with roleplay. Additionally, I think that a lot of people just want to write. Sitting there alone and getting better at writing is pretty boring. You can do it with people instead, in roleplay. And after a few years of roleplay, writing a novel isn’t going to seem as daunting.

What kinds of things should developers focus on to encourage this kind of gameplay?

Why is it important from your perspective for developers to support roleplayers and their playstyle?

Two big reasons. Roleplayers are the ones who stick around in games. If they do these little things to help roleplayers roleplay together a little more, then they will never leave the game. Developers could mess everything up and roleplayers would still stick around just to keep roleplaying with each other. And the other reason being that roleplayers are willing to pay money for extra stuff. I am willing to bet that most of the money that ESO makes from the Crown Store is from roleplayers who want to dress up pretty.

If you’re looking to get into roleplay yourself, or if you’re questioning whether you’re a roleplayer or not, just remember something Floyd here said a little later in the conversation: “I think that everyone roleplays, even if it’s just a little bit. Like when your character is asked, ‘Do you do this or this?’ That’s roleplaying.”

The Human Floyd has a great YouTube channel that you should check out — roleplayer or not. And his Roleplay Headquarters website covers many facets of roleplay, especially those who roleplay in MMORPGs.

Thanks, The Human Floyd. We will talk again soon.