Remember all of those plans that Wild West Online had for a Kickstarter campaign this month and a Steam early access release? Well, plans change — and sometimes for the better.

The studio has issued a press statement saying that the “overwhelming response” to the game’s initial announcement was enough to prompt its investors to dump more money into the game, thereby negating any need for crowdfunding whatsoever. This means that Wild West Online will eschew Kickstarter and early access in order to focus on developing the game for a full launch in 2017.

“We’ve been fortunate enough to have our initial investors step up and provide additional funding to make the game we wanted, without having to raise money via crowdfunding. Westerns are lacking on PC so we can’t wait to release the game to the public,” said 612 Games CCO Stephan Bugaj. 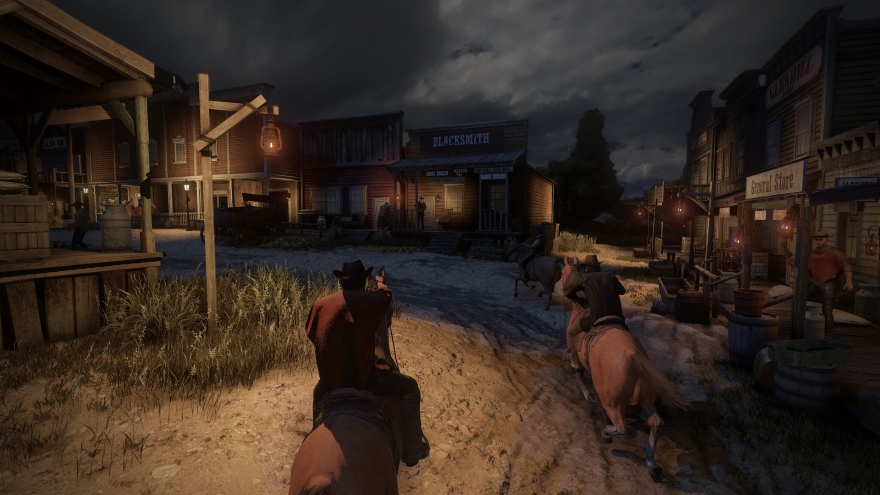 But what about all of those proposed stretch goals, like creating those extraneous female characters? The good news is that this additional funding includes all of these features as well, so sleep easy.

The official website has unloaded a ton of new information for fans, including an overview of the game, a FAQ (which is rather sparse at the moment), and forums. The site outlines some of the expansions that will come after the launch, including player housing, mountain ranges, and train robberies.

Wild West Online will be going into alpha and closed beta testing this summer. Players can sign up for testing on the front page.

Wow this is actually rather nice news indeed

This is awesome news and is how Kickstarter is meant to be used (or rather, not used). Good on them for not trying to scrounge money off the public now that they have secured proper funding.

That’s pretty awesome. Congrats to these guys. Here’s hoping what they pump out is great.

Is this going to have shooter combat mechanics like in RDR or that mmo shooting mechanics ala Fallen Earth style? If its shooter type combat like RDR then I am willing to at least try it, if it is FE type then count me out.

Color me cautiously enthusiastic.
Good on them for eschewing the Kickstarter thing.

A Western MMO w/o PvP seems unrealistic, this was not Utopia. There were rules of behavior. How you police those, not sure…

You can’t. That’s the problem. There are no Wyatt Earps, no Pat Garretts. Just outlaws killing peaceable citizens.
So, why would I want to play a game that can’t protect me… etc. etc.

We carebears can only vote with our purses or wallets. Game devs clearly aren’t listening when the last dozen titles are all “PvP sandboxes”. Sandbox apparently means “the ability to kick over someone else’s sandcastle” these days, not that you can actually, you know, make stuff, and enjoy it without risk.

Aye, there are a few taking some measures, but I doubt there’s any of them taking enough to really balance the playing field. I’d love to see it, and find in game methods for making law and order important to all (including those outlaws) overall… as well as fun to play. Sadly, I don’t see that happening any time soon.

Still, I offer some support and encouragement to those doing anything to mitigate that, and note to them exactly why I am doing so (and the hope of something better further on.) One potential positive is that feedback from those like me has prompted a “potential for an RP ruleset server” from Life is Feudal (Not holding my breath, but would be very cool to see!) Hopefully as many people keep pushing those points we can see some different server rulesets, or even just games taking those lessons to heart outright! :D

Melissa – I’m in favor of a law enforcement, posses, you name it.

Agreed and that’s what I said in the last article about this game.
I mean, what do you think of when you think wild west?
Shoot outs! Bar room brawls! Dueling at high noon!
Without PVP this just wouldn’t seem right to me.

It would be cool an interesting if there were factions though. Like marshalls and lawmen, native americans and outlaws. Maybe even non-combat classes like artisans, farmers, ranshers, gamblers, entertainers… painted ladies? Haha

PvP in online games is nothing more than a wet slap on the wrist. So either have it properly or not at all.

This. Add to that a balance of reward and gameplay that suits lawmen being something people will enjoy (rather than just boringly waiting for somebody to do dastardly deeds defying decrees of decorum 99% of the time!)

I’m all for open PvP being allowed… if it is extremely risky to those who are playing the ‘evil’ role and upsetting other players. My ideal system would involve several requirements for ‘banditry’ rather than just being considered a murderer, including demands for payoff AND letting the players go if paid (Something like a ‘You can pass for a toll of 2% of your current carried wealth’ option.) In such a case I would also require funds to be transferred by players to any local bank for use.

Mick – I concur. Just flag the murderer and their account.

if they ever introduced a Permadeath penalty (once caught and brought to justice) for PvP ganking, I would play that game. It would become a very interesting game indeed for the outlaw on-the-run. I’m not even joking here. A Bounty-Posse construct, rather like a raid, would be entertaining.

Rotten – Non-combat classes would be essential in my western game, however, the prostitutes would be packing a Derringer.

I’m looking forward to it simply for a change of pace. A Western mmo would be a refreshing change. Sign me up.

MOP, I do hope you’ll be covering this game along with the extensive articles about Kickstarter this and that. These people don’t deserve to get less coverage for skipping the “Beg for money even though we don’t really need it” phase of game development.

I think it’s safe to say that WWO is firmly on our radar.

Good news. Glad they have smart investors! It’s nice to see them including females but they also seem to have included a lot more features. If you scroll down on the front page and read everything they have, it seems like a much more fleshed out game which is nice to see. Will definitely be keeping an eye on this one. My question now is how will they handle combat? They mention action, but that’s such a general term. Also will they have classes? They’re doing primarily gun combat obviously, but how does that translate to an MMO as compared to other types of gun based PC games?

Anyone know of a wild west/gunfighter name generator? :P

I’ll post it again since making new content for mmo forum boards is not cost effective. I will take a page from City of Heroes though.

Only if they have cash shops. o.O

I sort of made my own way back by combining the names of western wildflowers and other plants. You get stuff like Parnassus Spurge, Calico Glory, and Twayblade Vetch. They sound a little more fantasy western though.

Another easy thing to do is take a biblical place or name and combine it with a simple last name. Such as Jericho Star, or Delilah Grey.