END_OF_DOCUMENT_TOKEN_TO_BE_REPLACED
Like many readers, I was originally disappointed when Destiny wasn’t released for PC. I’m not even a Halo fan but could see that the title had promise. Release, though, sounded just OK. I fed my sci-fi MMO-ish need with doses of PlanetSide 2 and Star Wars: The Old Republic and largely ignored the title, aside from the fact that major gaming sites seemed happy with the expansion. I figured it was one of those few decent console games not made by Nintendo that PC players just wouldn’t get. Whatever.

Fast forward to the announcement that Blizzard would add Destiny 2 to its launcher to ensure its PC release. PC fans freak out. World of Warcraft token values skyrocket. Massively OP writers and readers note its potential to define the genre. The chance to demo it at E3 put me on the hype train, but the reality has caused me to pump the breaks.

The biggest problem with my Destiny 2 experience was the nature of the demo. MMOs really are hard to demo when compared to most games. They’re about immersion, community, teamwork, and persistence. There are few ways to show all that in the typical 15-30 minute floor demo, but I felt not-really-an-MMO Sea of Thieves actually did it better than most legitimate MMOs have. Surly Bungie could match that with to show off the sequel that should be the fruits of labor when toeing the line of our genre, or at least tease the PvE experience by showing some of the single-player campaign some other media saw.

Nope. The Destiny 2 demo I saw was a battleground. I’d seen another company do this with another large, open-looking multiplayer game, and while I love some lobby games, I don’t play them and expect much persistence. For an MMO (or something trying to be persistent), I want to see something about the world, not self-contained content. I like battlegrounds for accessibility, but I want long term effects beyond gaining some levels or loot, and while a demo rarely can do that, it can hint at it. Destiny 2’s demo didn’t. 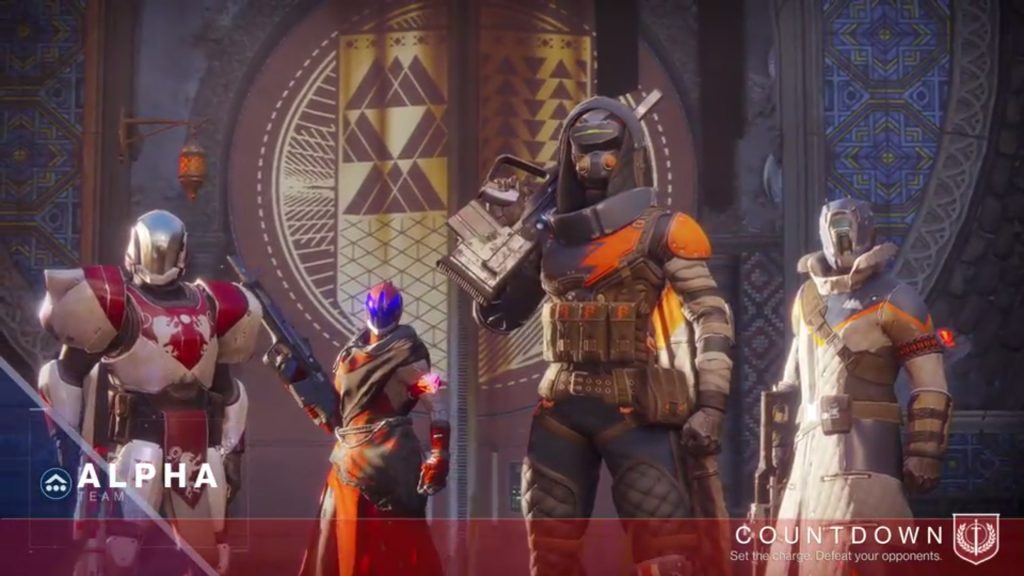 That being said, Countdown, the battleground used for the demo, was enjoyable. Each team of four took turns on offense and defense, being able to win by eliminating the other team or by successfully doing an objective: Offense tries to set off a bomb at one of two locations by activating the bomb and holding down the site until it goes off, while defense tries to prevent the bomb from being activated or diffusing it. However, even if offense can set off bomb, the match won’t end, making me think that a good defense could potentially kill offense and at least tie the match, if not win it.

While killing may not sound like a big deal, it should be noted that this was a single elimination mode: if you died, you’re out for the rest of the round. Each team does get a few revives, but they weren’t automatic, and they had a limit. This means that not only did players have to decide if someone was worth rezzing (especially if he or she ran in guns blazing and got killed within moments) but stand near that ally to resurrect him or her, making it possible to lure enemies out of cover in attempts to save their fallen comrade. It also meant you could easily revive that player your team just barely finished as the body crumbled behind solid cover.

As a fan of Overwatch’s 3v3 Elimination mode, I was immediately drawn to Countdown, especially because the game goes to the team that gets six wins first. There’s plenty of room for error and comebacks, but again, this feels like something to innovate lobby shooters, not a persistent world.

We weren’t allowed time to check our loadouts or pick characters, so I apologize for some vague descriptions. What I can tell you is that the gun my Gunslinger (I think) was using packed a punch, so much so that it caused the gun to move around and force me to constantly readjust my aim. It’s not the kind of weapon I tend to use in shooters because I’m a terrible shot, but I could see the appeal for those looking to invest deeply to master something so potentially deadly. The problem for me, however, was that our guns were so strong that the only time I saw melee was when someone ran around a corner and (I think) stuck a sci-fi sword into me.

Our team wasn’t great, but one thing we picked up later was jet packs. While the mechanic wasn’t nearly as free as what I’m used to from, say, the Tribes series, having rockets that can take you over walls made the level design more interesting (though after Lawbreakers, it’s hard to keep innovating in that area). While I did use my rockets to ambush some of my enemies and get off a revive, my team was both unskilled and uncommunicative. We had one guy who was a pretty good shot, taking down three out of four enemies solo after a particularly brutal encounter, displaying how much skill can help in the game, but time and numbers caught up with him. The other team simply moved as a better unit, even if they had mostly figured out the rocket jumping after we had.

Our lone gunmen had given us a single round by detonating a bomb, but as I mentioned earlier, we noticed the match hadn’t ended immediately. He still had to wait for the general match countdown to complete, and the other team, seeming to have figured out something was wrong, nearly did so in the confusion.

While I enjoyed the match, I didn’t get that MMO feeling. I didn’t feel like I got what the hype was about. Remember, I’m also someone who didn’t get Overwatch for a very long time, probably because I jump to games with deep innovations and forget that many mainstream titles are taking baby steps. Destiny 2’s Countdown option certainly fits that bill, and scratches an itch from an Overwatch mode I almost exclusively play (aside from holiday events), so that probably says something. However, I’ll wait for a meatier demo before I give into the hype again.