END_OF_DOCUMENT_TOKEN_TO_BE_REPLACED
Nothing may quite compare to last week’s big server evolution in scope of change for ArcheAge, but there are more changes coming over the next couple of months. The good news is one of those involves corgis! Who doesn’t love corgis?

At this year’s PAX West, I talked with Trion Associate Producer Seraphina Brennan – whom many of you will remember as a former Massively writer from many years ago when we were under AOL! – about ArcheAge’s third anniversary this month, the remainder of the 3.7 update with its lunagem overhaul, and the release of expansion 4.0 with its new ship, cross-server arenas, improved crafting UI and tutorials, and currency conversion. Let’s dig in!

Let’s get our priorities straight: Corgis come first. For the September anniversary update there will be a new event called Corgi Conundrum. Brennan described how players will have to find ways to entertain an amazing magical giant pup named Kirby. Those things will involve going all over the world, doing dungeons, killing monsters, and trying to find specific items. As players do these things they will earn coins that can buy boxes with a chance at items like the Rolls Royce-looking car. Brennan also told me that players who complete all six of Kirby’s quests for the event will earn special new corgis: a cowboy corgi and a detective corgi.

The entire anniversary isn’t all about corgis (though who could blame Trion if it were?). At the beginning of this anniversary event, players will receive a special cloak, too. The Shadowguard event also makes a return, and players can earn third anniversary coins throughout this event to spend at special vendors.

The next big update for ArcheAge is getting the remainder of 3.7 bundled with 4.0 come winter. This update includes a physical, in-game raid bulletin board where players can advertise raids ahead of time and solicit PUG players to participate. “Now you no longer have to X up in chat,” Brennan explained.

Perhaps the most anticipated aspect of this update is the lunagem overhaul. Currently, when players socket lunagems into their gear, it becomes increasingly harder to successfully do with each added gem. Worse, when one gem breaks, all the gems in the item break. Sounds pretty punishing, right?

Luckily, that is changing. Here’s how Brennan explained the new system: Lunagems are now classified by color, and each of them does a different thing, such as blue for defense effects and red for attack effects. In fact, it’s better than color coding. “When you unseal the gem it works a lot like our current crafting system,” she said. “You pick the stats.” No more RNG of stat types! There are still different tiers of lunagems, so the higher tiers are more powerful, and they have a higher cost to socket them.

“Before, your chances to socket a gem could drop all the way down to like 5%. That was your success rate. Now, the base flat rate is going to be 70%; that’s the worst you can get. Most gems will still socket at 100% accuracy, and even if they don’t socket and they fail it will not blow up all the other gems in your item. Your gems are safe.”

Brennan told me this is in response to community feedback. Players want the systems to be more fair and direct with less RNG, and she says that’s the direction Trion wants to take. “When you do a thing, you get the thing.”

Come winter of 2017, the big expansion will also hit ArcheAge. This update has a great many features, and Brennan was able to touch on and show off a number of them.

First, she talked about the upcoming raid alliances. When large groups came together to do the major events in game, some raids may not get any credit for contribution, but these new raid alliances will allow two raids of 50 players (so 100 total) to ally to ensure everyone gets credit. “They still act as two different raids,” she said. “But if they are doing content or quests, they can actually all get credit for it.” 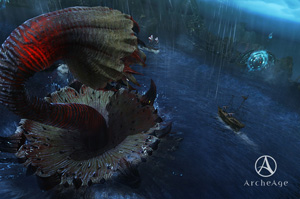 A new house and a new boat also join the scene. Housing fanatics will have the new massive Nuian Mansion available to build (assuming they can find a a big enough spot for it!). There’s also an enclosed ship that will change the dynamics of travel by sea; Brennan described how this turtle boat will be really hard to take over but equally hard to escape from.

What’s a big update without some UI changes? The unnamed 4.0 includes more changes to crafting, including a crafting tutorial for players to learn about the system and a totally revamped crafting folio window that lets players quickly see how to build everything in game. I was quite impressed by the new folio. The title system also has been revamped into a collection system and includes a new UI that shows players every single title in the game. Using this UI, players will be able to select which stat bonuses they have earned from a title independent of which one actually shows over their heads.

Another change Brennan told me about revolves around currency conversion: Warrior medals and merit badges are being removed from the game. But don’t worry, she assured me; they will be converted into another currency so “you’re not losing any progress.” Where you lose some, you gain some, as there will be a new a new currency, Kyrios’ medals, that will come from the arenas. These medals will have shop to buy things at separate from the honor shop

Speaking of arenas, there will finally be cross-server arenas. “All of the balanced arenas in game are actually going to be cross-server,” Brennan told me. That includes the new naval arena that will also launch with 4.0. Called Bloodsalt bay, this naval arena is a 5v5v5v5 experience that players will queue for solo. (Brennan acknowledged that community feedback has requested being able to join as a group, and that will be looked into to see if it is possible.)

The idea behind the arena is that the souls of the drowned sailors are trapped by Dahuta and need to be collected so they can move on to the afterlife. The goal is to see which ship’s crew of five can save the most souls (by seemingly shooting them with cannons) out of the 100.

But, of course, it can’t be that easy – you had to know there’d be a few catches. One, the other ships are trying to dash you to pieces, which releases all your souls back into the area to be collected. Two, there’s a gigantic gaping maw creature sitting in a massive whirlpool in the center of the arena trying desperately to devour you and your ship. Now add to those dangers currents going in different directions trying  to drag the ship down, collision damage with souls and ships, a monster lurking on the edges waiting to destroy your ship, and four other ships that want to sink you and take your captured souls, and your experience becomes anything but calm.

At least there’s no gear disparity: Brennan explained that this is a balanced arena, and as such all players are granted the same abilities inside.  “It’s 100% player skill,” she said. “There is no ‘My ship sucks’ or ‘My gear sucks.’ None of that.”

I remember trying this MMO in Beta, I thought WOW!!! this is fun… Then the release day came, and it went downhill so damn fast. I may have lasted 2 weeks.

There will never be an MMORPG with more squandered innate potential than ArcheAge. As a fan of the genre I am so disappointed this is not a more successful game. I did try to come back to the game when they did the fresh start, but after 3 days of long queues only to get booted and put back into queues, I left and never looked back. It’s stuff like that for which this game has constantly suffered.

RIP Archeage Alpha, we miss you.

Less reliance on RNG’s is a good thing. I like the sentiment “you do a thing, you get a thing”.

Definitely agreed! Things like Luskas were always frustrating if you didn’t manage to get into the ‘main’ raid :/