Well that didn’t take long! There are a plethora of survival sandboxes out there for fans to play (as you can see from our multiple guides!), enough that there might be some worry that the market for this genre is getting pretty saturated. Perhaps there is room still, but anyone entering that crowded market needs to have a good hook and be able to deliver a worthwhile experience in order to attract and keep players. Sadly, this isn’t always (often?) the case. Even when you want games to not just survive but thrive, there are a host of factors that work against that.

I have found that I enjoy the survival sandbox genre, and I play a number of the games. A couple get the lion’s share of my attention and game time while others are visited occasionally. Some of these titles have a chance to move into a favored position in my heart and my gaming line up. Others, however, have lost their chance completely. Here are seven survival sandboxes that I want to love, but don’t — at least not yet.

ROKH is one of those titles that I really, really want to love. It brought the idea of colonizing Mars to the genre. Who didn’t dream of living on Mars when they were young? I sure did. Unfortunately, ROKH has had a rocky time delivering. The studio insists ROKH hasn’t been abandoned in favor of the new sci-fi MMO project, but even with the recent revamp to crafting trees, development feels stalled. If the revamp was meant to excite folks for the game more, I am not sure it succeeded. Knowing that it isn’t really changing any time soon doesn’t entice me to log in. And even when I do, I just keep going in and doing the same beginning over and over and losing interest before I can get far. Does the game get better after the beginning? I don’t know; I can’t stay engaged long enough to find out.

I think I could get over the learning curve of crafting, but I cannot bring myself to invest that much time when the gameplay is shrouded by the feeling that it will all just disappear at any moment. If a nice steady wave of development were to come along, perhaps I could stay in longer and be hooked. For now, there is no hook and no real assurance (as brought by action, not words) that the game will continue. 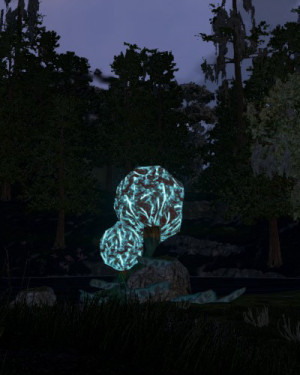 I had hopes for Fragmented, especially after the loss of The Repopulation. Yes, it may have been a way to try and raise money for the MMO, and I was good with that. I wanted to explore more of this alien world that might show off aspects of the MMO world like flora and fauna. But none of that came to pass because the game is in maintenance mode, and that just screams “don’t bother to waste time in me” to me.

Xsyon, Xyson, Xsyon. This is the first survival game I dove into, and it had promise. I really thought I would be spending big chunks of time here. After all, I had the chance to really affect the world around me, which is something I crave in gaming. I could fish! I could terraform! I could build! It turns out that the game just didn’t deliver, and that playtime time commitment didn’t come to pass.

Xsyon could have been so much, sitting there at the start of the survival genre phenom before it was even a thing… and it let the genre totally pass it by. The game has been riddled with bugs and lacking in development.  Seven years; for seven years this game has been out, and it is pretty well dead.

I do think the possibility of Hellion being a solid game is there, I just can’t get to that point. Each of the couple of times I played I hit a wall of frustration in the beginning much too early and then needed to step away. And step away I did — for a long, long time. I have still never seen beyond that intro ship/pod where you need to save yourself and get out. The one exception was when I launched myself out into space just to see what happened and then was hit with the bug that made my view nothing but streaking lines of my movement.

I am not one to want games to be easy, but something about early failure in this one got to me more so than in other games. And with limited gaming time, I gravitated back to another title I found more enjoyment in. This is one game I think I really need to dedicate a larger chunk of time to

Speaking of more time, let’s talk about Valnir Rok. I like the premise of this survival game; I like the unique flavor of vikings. Unfortunately, when I played it just didn’t grab a hold of me and hook me in. With so much vying for my attention, it is hard to talk yourself into dedicating more time to something that didn’t grab you enough in the beginning to make you want to log right back in and continue.

Another disadvantage this title has for me is that I have found I simply do not enjoy official servers. Finding a decent community is not easy, and running into griefing idiots quickly ruin the experience of any game for me. The answer is to play on my own private server or a friend’s, but if we don’t know if the game will really pull us in, why would we spend the money to run a server? This one is a bit of a catch-22.

What on earth happened to The Skies? With a post-apocalyptic flavor and more MMO elements than many survival games, this one was primed to be a better fit for me personally. It even had a roleplay system! So how is this not something I have played more? Oh, that’s right, playing as a male is always a turn off for me. And while I was waiting for things to flesh out a bit more, the development stopped. Literally the last news on Steam was October 2016. So in less than six months it pretty much poofed itself. I think i could have loved playing this more if it kept going. (I think I can still log in and play, but I have already deleted it off my computer; why keep something without active development?)

I really like many aspects of SOS. The whole premise of it being a television reality show is fun, and I really enjoy the set up for audience members. Watching and cheering on other players with emotes is fun even if I have been eliminated myself. So why is the game here on the list of games that I don’t love?

The big reason I can’t get into SOS is its basic premise. I like survival, but not necessarily when it’s versus other players. And I have come to learn that I really do not like the battle royale format — especially when it is each man for himself — and as of this very week, the game is only becoming more and more a battle royale game. I think the format is just too opposite of my actual personality. I do not find enjoyment in being king of the mountain, or besting others. I can better enjoy PvP and elimination when done as groups or teams, but I have never (and doubt I will ever) enjoy solo PvP. I have no need to feel I beat up everyone, but I do love to help others.

Survival games that have stalled in or ended development are just going to remain in my review mirror. I will enjoy what memories I have and maybe think wistfully on occasion about what might have been. But that’s it for them. Those that just aren’t for me, I’ll cheer their success on from the outside. But there are titles here that haven’t blown their chances and deserve another one. For those, I owe it to them to give them a real chance, not just a peek.

Often this job keeps me moving around games, and in my spare time (haha like I have any) I snatch a little play time in my personal favorites. But maybe, just maybe, one of these titles could become a new favorite if I gave it enough time. I want to take those games that haven’t hooked me straight off and dedicate a real effort to delving into them to see if perhaps the hook is there just a bit farther in. So that is what I will do: I’ll give a good number of hours to select titles and see if I do come to love them more.

How about you? Are there survival games you want to love but don’t? Why? I’d love to hear your thoughts in the comments below.