A new year is all about new hopes, new goals, and — hopefully — new features and content. I am talking about games, of course! (Although I might go for a new third-arm feature to hold cats while still being able to game with a keyboard and mouse.) And with 2019 here, there are 12 months ahead that can herald any number of improvements to our favorite survival games. The big question is, what features and content will this year bring? Studios surely/hopefully have their own goals and plans for their titles. My hopes for survival sandboxes might not match up with the developers’ goals, but they are still things that can definitely enhance the games.

Considering how many survival games there are, a comprehensive list of hopes for each of them would be pretty exhausting. So although I want to see Outpost Zero pull in even more players, and I want to find two more communities to pit against MOP fans in a rousing round of Rend, I’ll be focusing my thoughts on the two titles I play the most — Conan Exiles and ARK: Survival Evolved — as well as the genre as a whole.

Good for the genre

While these first to items on the list could very easily be placed in both of my selected games, the truth is I want them in the genre. And the games that introduce them will definitely have a leg up on their competition.

Virtual reality: One of the very first things I want to see in the genre is some virtual reality capability. The single-player survival Subnautica already touts it, and I am itching to be able to play it in VR. Can you just imagine how enhanced the experience will be with it? Now, take that and picture yourself stalking a dino to tame in ARK when a T-Rex suddenly roars in your face. Right there, in your face! Think about looking down while scaling cliffs Conan Exiles or looking up while facing a mammoth. Imagine exploring any number of the alien or decimated worlds out there in the genre. The thrill would be increased exponentially. VR lets you be dramatically more immersed. ARK was doing it at one point, but that fell by the wayside, broke/disappeared, and has no support at all. ARK Park does not count!

DM tools: Why don’t more survival games have Dungeon Master tools? Sure, you can mod and set parameters by hosting private servers with most of the titles, but I am talking about having a tool set in the game to create content for your players. Xsyon — which came out almost eight years ago, long before the other survival game except Dead Frontier — had the ability for players to make quests for others via their totems, granting rewards for delivering things. That’s pretty minimal in the tools department. Why can’t we have this in newer games? Why can’t we have more? Official servers could benefit just as much as private ones with some DM tools that could create content like sandboxes of old or Sword Coast Legends.

Conan Exiles could certainly benefit from the two ideas above, but the next two are are specific to this title (and what I want most!).

Better pet commands: Please, please, please Funcom, bring on the better pet commands! This is actually a feature that is on the devs’ radar, so I am very hopeful that it will be realized. Raising pets is fun and all, but hunting with them is pretty problematic. I want to be able to set a pet to passive, send a pet to attack a target, and call it back with a heel. I’d really like to have it so my pets stop trying to kill my friends. It’s a bummer when folks come to visit and your kitty tries to chew their faces off! (On the topic of pets, let’s also add letting players see the young animals in the pen as they are being raised – because it looks cool.)

Alliances: One awesome way to have pets not attack your friends would be to have alliances in game! I am not the only person who enjoys smaller clans (especially for roleplay purposes) who does not want to be at war with everyone else. No, we want our smaller groups to be able to band together. ARK sure has this one right. An alliance would allow pets and such to be friendly to your friends who are in a different clan. Also, think of all the intrigue and politics that could go into this! It has extra player content written all over it.

OK, so there are many things that could/should be done to help ARK out, starting with promised optimization and bug fixes. But we are talking about hopes with some actual chance here! These three items on my list for this year are actually plausible.

Start S+: We’ve been promised the S+ building integration for so long, and as much as I don’t trust WildCard’s words any longer, I have my fingers crossed the studio actually delivers this time. I know, getting my hopes up is dangerous, but it appears as if work is actually moving forward for it. That once-mod will be a big game-changer once integrated into the base game for folks who are into building and decorating in this survival game. I’d dive back in more enthusiastically if it finally launches.

Stop auto updating: I don’t know whom else this affects, but it is driving me absolutely batty! After one big update sometime in the last couple of months (sorry, I can’t quite remember which), my ARK started forcibly auto-updating even though Steam is set to disabled. I have sat and watched it start to update while it is clearly marked disabled for the auto updates. No other game in my Steam library has this problem, and ARK didn’t even have it for a long time. I have no idea what happened, but I want it to stop. Something in ARK programming needs to be fixed! 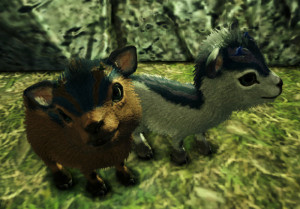 Provide the promised Primal survival: Way back during a time we still believed WildCard’s  promises, we were told we’d have a free update that offers a new way to play ARK: primal survival. In this mode, you got to play the dinosaurs. This certainly sounded intriguing, and many players were looking forward to it. Being a little glow goat, a raptor, or a ravager would certainly be a new and fun experience. But do you see that mode anywhere? Nope. I understand that it is quite an undertaking, and I know that this is the least likely of the three to happen. Still, I know some folks who would come back for another look at ARK if it were implemented though, so here’s hoping that actually can come to pass.