I can’t remember the last time I struggled so much deciding whether I like a game or not. I’m a fan of ARPGs, and while I haven’t played Magic: The Gathering since elementary school, I remember finding the world and lore really neat, so I’ve had no small amount of hype in my heart for Magic Legends, the new online OARPG from Cryptic Studios and Perfect World Entertainment.

Now it’s (soft) launched (into open beta), and I’ve struggled to decide how I feel. It’s a game with a lot to recommend it – but also a lot of rough edges.

Let’s start with the bad news. Cryptic and PWE games have a certain reputation for lacking polish and having overly aggressive monetization, and while I’d like to tell you Magic: Legends is the exception to this, that would be a lie.

A lot of people have reported issues with lag and low framerates. I personally have not had that issue – in fact I’ve been impressed by how smoothly the game runs – but I have encountered many other, smaller bugs. Menus don’t always load properly; voice lines play at the wrong time or not at all. In one hilarious incident, I wound up stuck in my ultimate ability for several minutes and facerolled most of a story mission — at least that was entertaining.

There are also some areas of the game that feel a bit phoned-in. I wouldn’t call the story bad per se, but it makes no attempt to provide explanation or context to anyone who isn’t already well-versed in Magic lore. The philosophy seems to have been hardcore Magic fans don’t need the explanation, and everyone else will just ignore the story anyway, but that’s really not a good way to do things, as there are those of us who aren’t experts but would like to learn.

None of the issues I’ve encountered is particularly egregious on its own, but the sheer volume of them makes the game feel sloppy and unfinished. I don’t think beta is a valid excuse because the studios already opened it to the public, and the game is already fully monetized. 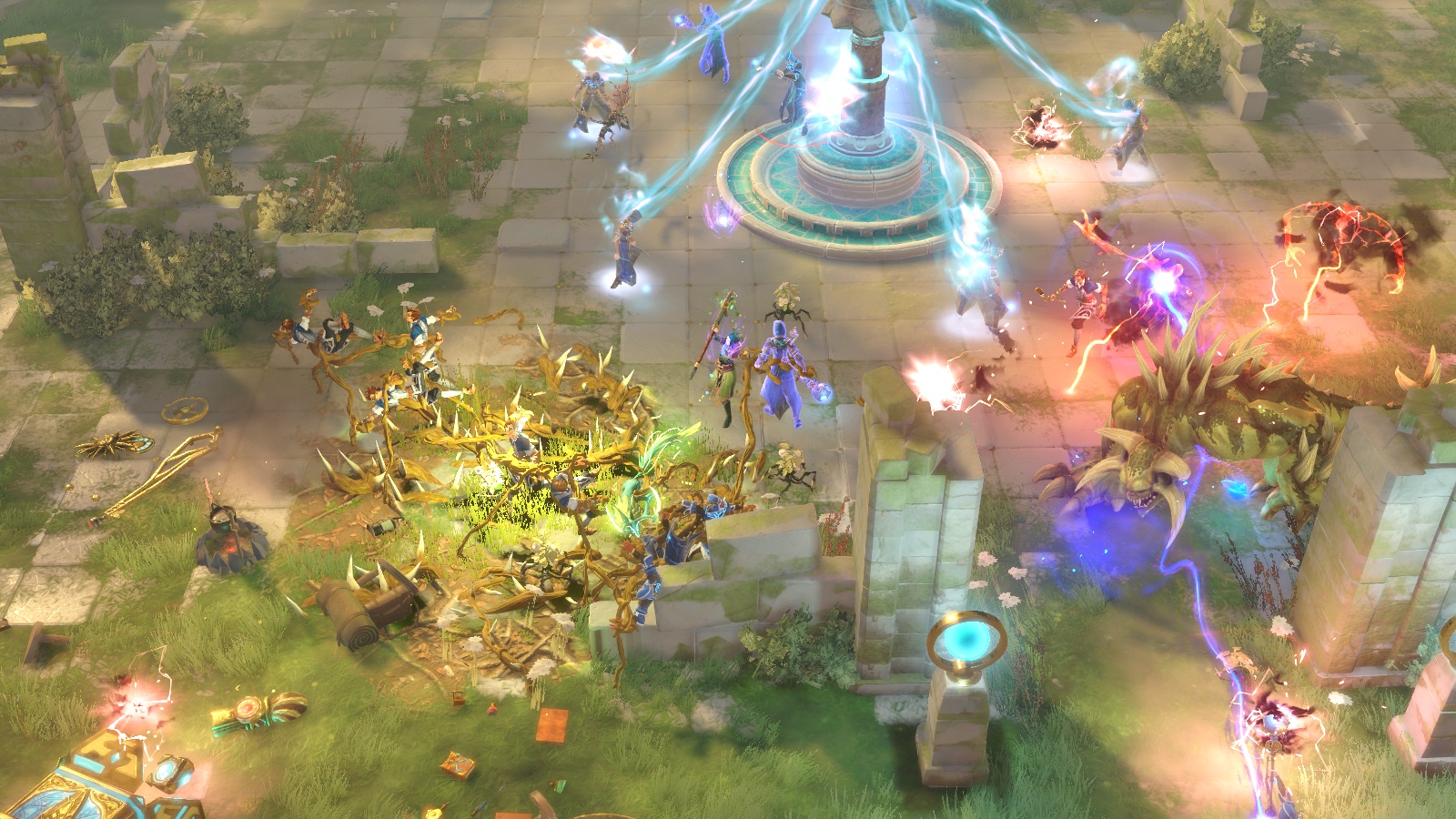 The monetization leads to another major issue. Magic Legends has six classes. Five are available freely at character creation or as unlocks later one, but the other, the Dimir Assassin, was initially an extremely low drop rate from paid booster packs – aka lockboxes.

Suffice it to say this didn’t go over well. The pushback was intense enough that Cryptic has now decided to also grant the Dimir Assassin from the final level of the Battlepass – a rare concession for a company infamous for its love of lockboxes.

I plan to go into this in more detail in a future article because I think it’s an interesting case of a good plan gone awry, but for now I will say this: The way classes work in ML makes the idea of monetizing one this way much less egregious than it might seem at first glance, but the way it was handled left a bad taste in the mouth. It’s been a poor note for the game to start on, and it was definitely a PR hit that could have been avoided.

It’s a shame because aside from that one thing I would say ML has a surprisingly generous free-to-play business model, especially by Cryptic’s standards. The cash shop is actually fairly sparse and mostly stocked with very tame convenience and cosmetic items.

Nearly all of the desirable items have been dumped into the Battlepass, the premium version of which is only $10, but even the free version has a lot of good stuff. I also appreciate that it is somewhat frontloaded, with most of the really desirable rewards in the first 30 (of 50) levels, so it’s not the worst grind. Unless you want the Assassin, anyway. If that one issue hadn’t been handled so badly, ML‘s monetization might have earned praise rather than hate.

On the other hand, there are a number of things that Magic Legends does tremendously well. For one, I adore its build system. It’s up there with Wolcen and the original version of The Secret World for my all-time favorite RPG build systems. The possibilities are nearly limitless. 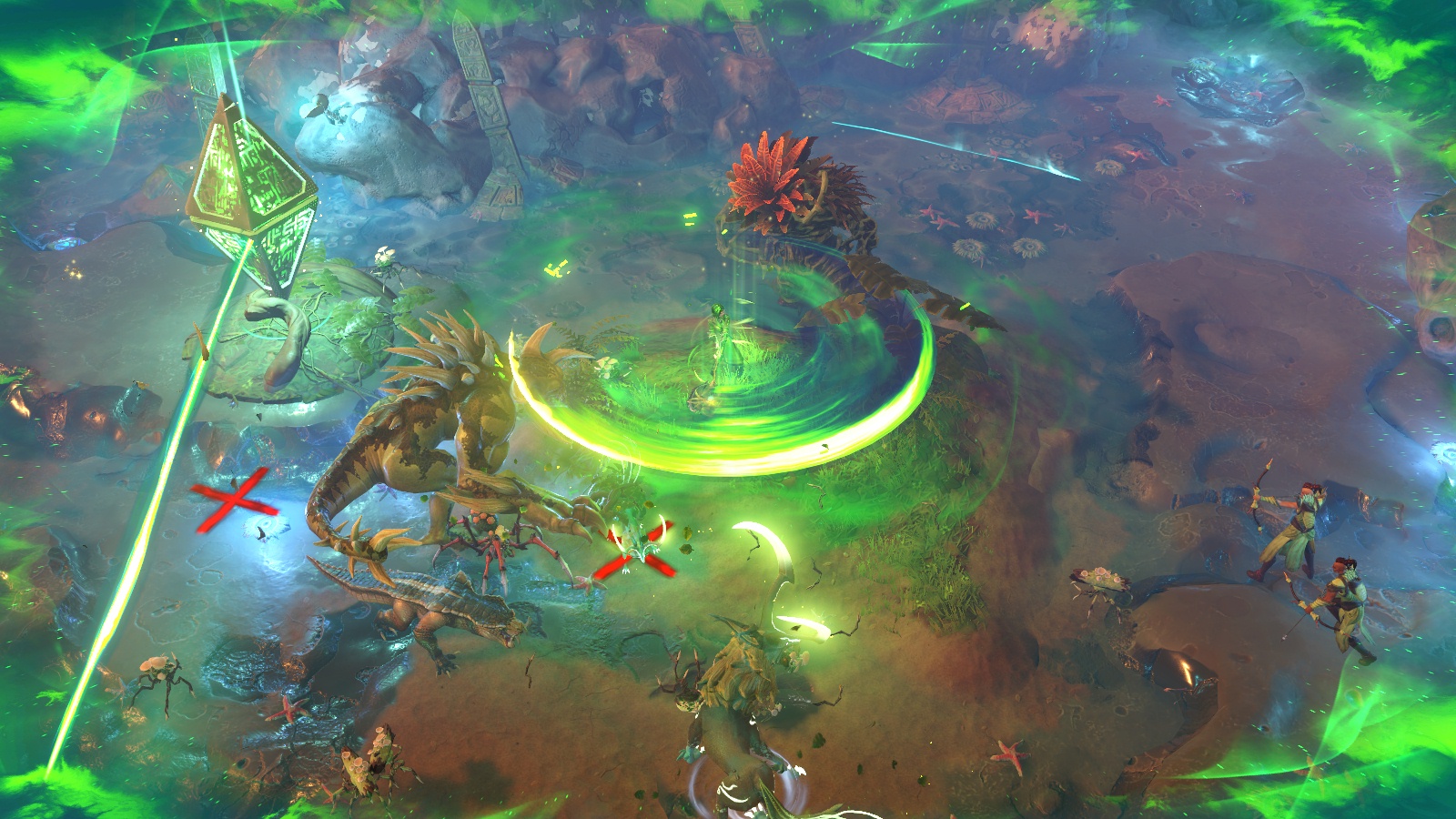 You start by choosing a class, but as mentioned above, it doesn’t really mean the same thing it does in other games. It’s not the most important part of your build; it just determines your basic attack, some generic passives, and a few other peripheral abilities. You also have the option to unlock other classes and switch between them, though it takes some time to get to that point.

You’ll then acquire artifacts and equipment as you adventure. Rather than the bland stat boosters items are in most ARPGs, almost all of the items in ML offer some kind of proc or other interesting boost to further augment your build.

But what really matters is your deck, a collection of 12 spell “cards” that can be drawn from up to two of five colors, with each color having its own specialties. To start, you get a deck of the same color as your initial class, but later any color(s) can be used with any class, and Cryptic clearly worked pretty hard to make any color viable with any class.

Your deck is what really defines what your character is about. Everything else is about supporting the deck. This is what makes character-building so flexible in Magic: Legends. There’s nearly 200 cards to choose from, so the possibilities for what kind of character you could build is nearly limitless, especially when combined with classes, equipment, and artifacts.

I can see tremendous replay value in simply trying different builds, and I expect I will probably spend a fair bit of time doing just that.

One of the weirdest quirks of this game is that only four cards can be on your action bar at a time, and they’re randomly drawn. This took quite a bit of getting used to, and I still have mixed feelings on it, but it does elegantly allow you to have a large pool of cards without causing button bloat, plus it creates some interesting tactical decision-making. 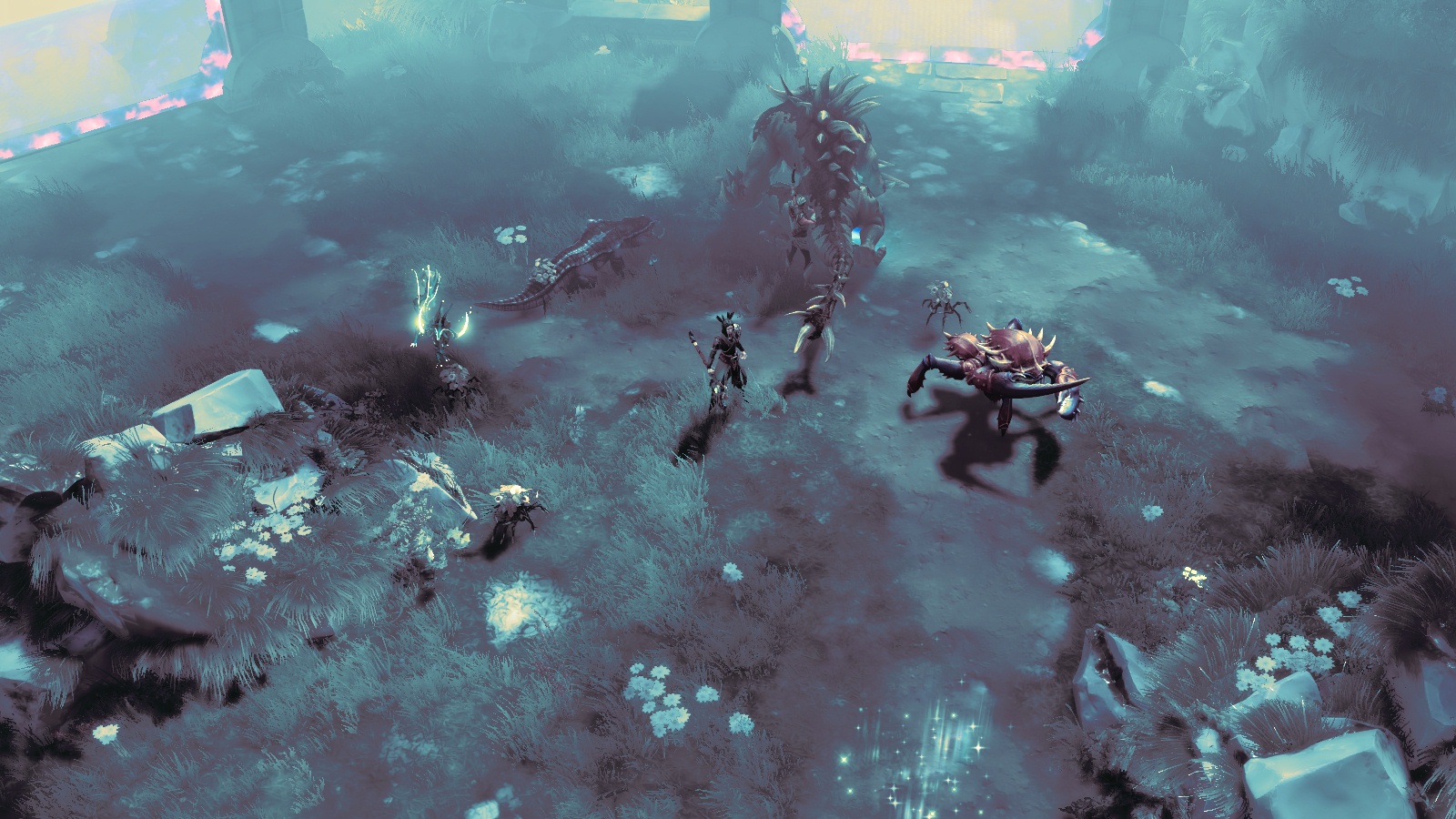 To compensate for the extra challenge of reacting to a randomized deck, Cryptic has ensured that combat in ML is a fair bit slower than in other OARPGs. I am again mixed on this, but I can see some people really appreciating the more methodical approach to ARPG combat. It does all take some getting used to, but the deck system is definitely more good than bad in my book.

Something else I appreciate is that there are so many different ways to earn cards. Some are random drops, while others are tied to specific content. It feels very flavorful to have to go to a zone tied to blue mana in order to earn blue cards. I hope future updates to the game continue to expand on this; it would be great to find new cards themed to whatever content is current, or maybe even have unique quests or achievements to earn specific cards.

It also helps that the game is pretty freeform in how you approach content. There’s a fairly lengthy tutorial sequence where things are very on-rails, but once that ends you can pretty much just go anywhere and do whatever you want. There’s a range of difficulty settings for all content, even the open world zones, so there’s no real risk of under or over-leveling anything.

Visual customization also offers welcome flexibility. Unfortunately the character creator does lack non-human options, which is disappointing, but the variety of outfits on offer in this game — even to a free player — is already quite impressive, and you can switch between outfits freely in any town.

What’s even better is that outfits save your character’s physical specifications as well, so a new outfit may entail not just new clothes but entirely new physical features. One “outfit” could be a willowy female character, while another could have a beefy male physique. 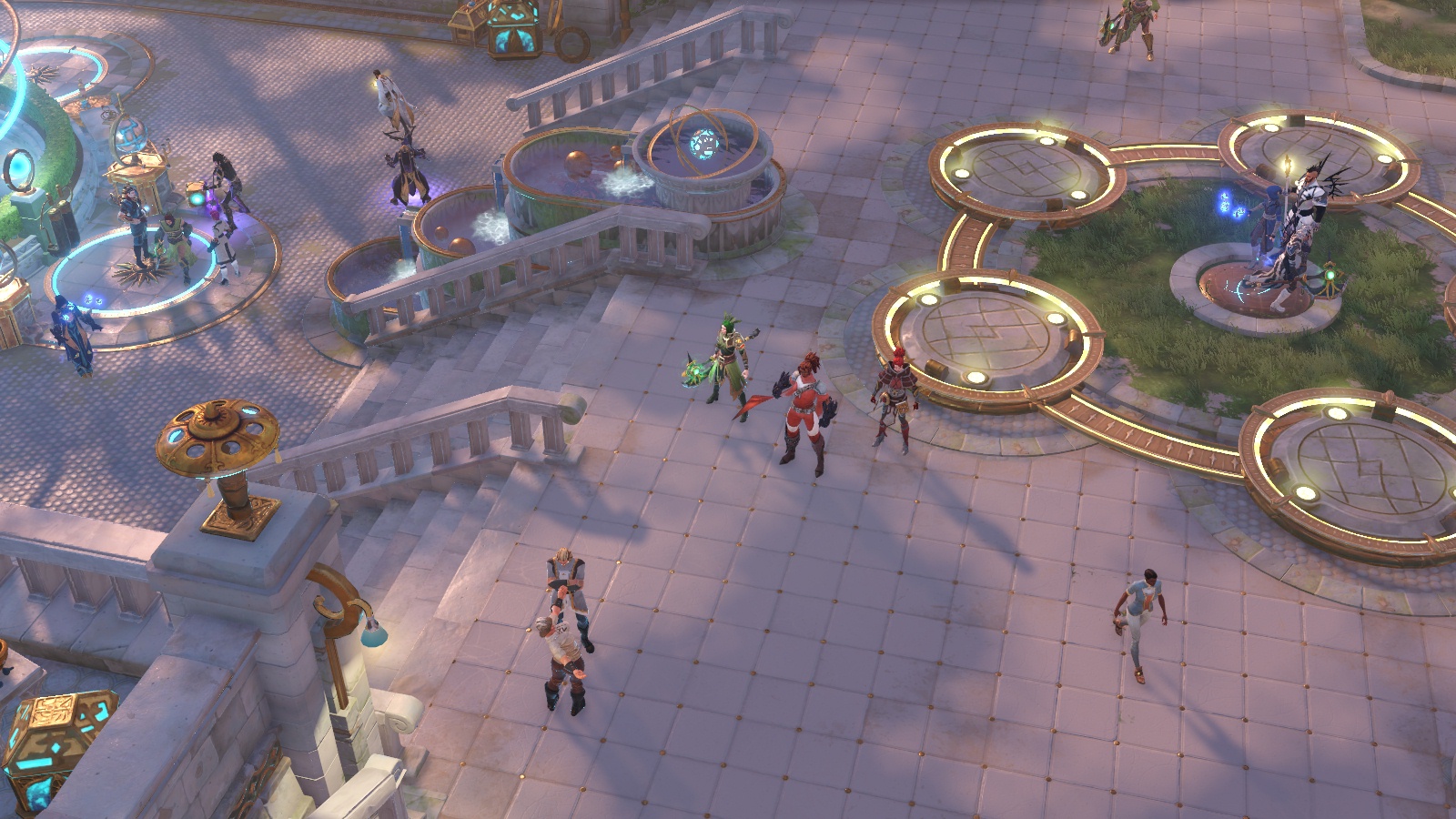 Between this and the flexible build system, Magic: Legends may well be the first game I’ve played where there is well and truly no need for alts. The only part of your character you can’t eventually change on the fly is the name.

One final thing I want to note is how surprisingly like a traditional MMORPG Magic Legends feels, despite claims to the contrary by the developers. The logical part of me argues that ML can’t meet the definition of an MMO. The maximum group size is three people, and the player cap for open world zones is only a little higher.

But yet it feels very multiplayer. Despite the low player cap, I’m always running into people while exploring the open world. The social hub zone is downright crowded. Ordeals can be soloed, but they’re quicker and more fun with other people, and I’ve probably done more grouping in the last week than I have in the entire year previous. Even the slower pace of combat feels vaguely reminiscent of some older MMOs, though not unpleasantly so.

There’s a great deal to appreciate about Magic Legends, but I can’t deny it is a very messy game. I hope it will improve with time because there are some really good ideas here that deserve to shine.