When Pokemon Unite was first announced, I had severe doubts I’d even give it a shot. I know I’m the local Pokemon guy, but there are many games in the franchise I’ve never even touched, and PU being a MOBA partially for mobile by a Chinese company had me worried. I don’t have any particular beef with Chinese games or studios, but as our own Carlo Lacsina has said, monetization does work differently across borders, and often in ways that turn me off.

However, nearly a year later when the game was announced to be almost ready, I’d seen enough to make me want to jump in: accessible gameplay, respect for the franchise, quick matches, and simplified score announcements, whispers of pay-to-win mechanics aside.

Today, though, we’re going to focus on the gameplay itself. Unite is still relatively new and thus far, I haven’t run into too many situations where I felt I got poke-murdered by a wailord. I genuinely enjoy playing the game thus far, and in terms of simplifying the MOBA genre, I find myself comparing it often to Heroes of the Storm – for better or for worse. 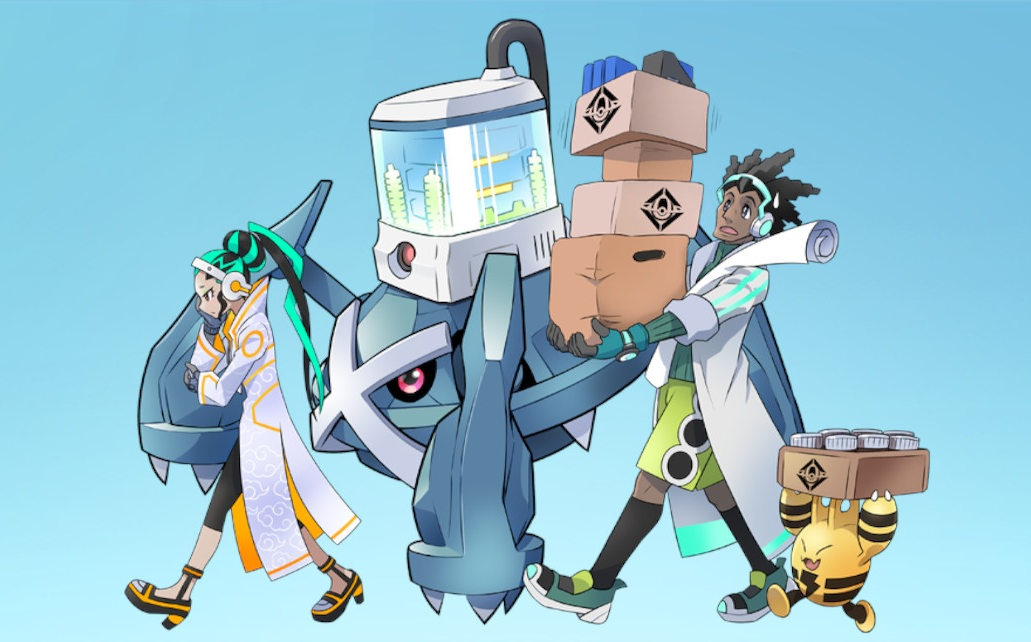 A new world of pokemon

As I mentioned previously, PU is a kind of MOBA game that has slam-dunking as the point scoring mechanism. It’s a bit of Heroes of the Storm’s Blackheart Bay, except there’s no ship, coins are points from mobs everywhere, and the turn-in points are what would be towers in a more traditional MOBA – except that in PU, they don’t fight back. There are no super complex builds, but pokemon and moves power up throughout the game (mostly – sorry Raichu fans, the company mascot once again cut out its final form to amass more mascot points). You can choose between two options for two of your skills to mix-and-match combos. The game also does a bit of auto-targeting to assist newer/casual players, but there are fine-tune options for direct aiming for advanced players as well.

Some maps mix things up a bit, like increasing or decreasing the number of players (3-5) or adding new elements like a conveyor belt or boss that grants a damage reflect shield to the slayer’s team. Instead of beating up a tower like you do in most MOBAs, you beat up the enemy’s goals, and you do so with points as you “charge” your slam-dunk on the goal zone.

Here’s the kicker: You can’t see the overall game score. Throughout the game, you’ll be given notifications like, “We’re winning” or “We’re struggling” or even “We’re really struggling.” Reading the map may give you a vague idea of the score, such as if you’re missing several bases while the enemy is missing none. I know some people want to see the exact score, but in my opinion, this system is better for most casuals at the least, and probably pros as well.

Even though I’ve had several teams give up, I’ve also had many make major comebacks, moreso than I can remember in other MOBAs. I can’t speak for my allies, but the lack of a score helps prevent me from getting overly emotional and making more mistakes (“tilted”). Maps often have some kind of mechanic to assist with comebacks, such as the late game Zapdos boss, whose defeat makes all enemy goals practically instant-scoring while also giving that team 20 points per person to score with (30 for the player who got the final hit).

While there are some complaints about these mechanics (especially Zappy), I’d argue the issue is more for competitive players than casuals. These mechanics feel like a typical Nintendo-style wild card mechanic, like the Blue Shell in Mario Kart or end-of-round bonus stars in Mario Party. While devastating, they aren’t all-powerful. For example, if you know Zapdos is being fought over, you can try to snipe it or wait in the jungle for the team to split up and pick off the enemies. Death causes players to drop a certain percentage of their points, which can be used against their goal zones, turning a Zapdos killing team into nice, fat piñatas who may be in a weakened state after defeating the thunderbird.

The games are nice and short too. Ten minutes is the actual limit (5 minutes in Quick Play), and it’s great. You still have jungling, team kills, side objectives, and so forth, but the pacing is tighter and the chat is limited to preset phrases (well, and voice chat, but I’ve yet to encounter anyone using even though it’s on by default). 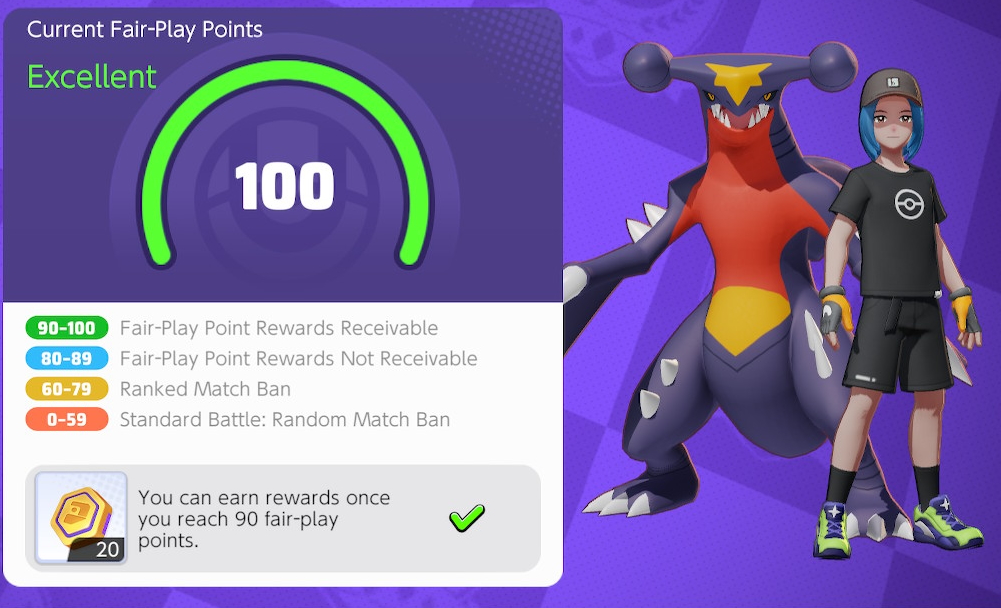 You can also give someone a bit of praise at the end of a match by selecting the character and using the “Good Job” option, which may or may not dispense a bonus award. The game further incentivizes good play by having “Fair Play” points that not only grant a small bonus to non-problem players but begin to restrict players more and more. I’ve seen people I’ve reported for AFKing instantly receive penalties of -10 points, and while I’m not sure how or why it happens, it does give me some hope for community maintenance.

It’s no Solstice Arena (RIP), the single-lane Zynga MOBA that like PU was also cross-platform and chatless, making it the MOBA I would still recommend most for people looking to get into the genre, just based on design alone. PU, though, clearly has a broader reach thanks to the Pokemon IP, and will hit mobile phones and share your progress between platforms this September, which seems as if it’ll be a game-changer – assuming everything continues as is.

As always, things could be better. I’m not loving the game’s character customization. I’m sadly used to being Peter Pan and never aging in most Pokemon games despite the fact that some of us have been playing these games for decades. There’s also the splitting of several currencies: Aeos coins (which have a weekly cap) can be used to buy pokemon and held items; Aeos tickets which are for avatar cosmetics, pokemon, held items, boosts, and enhancements; and then there’s gems, which let you buy all of those plus pokemon skins, battle passes, and more item enhancement. The latter’s power, especially with the weekly caps on coins and “energy” (a kind of currency that activates a gacha-like reward system), threatens the overall power economy, as players can already max out held items if they want.

It costs about $40 to max out a held item. A max-level player only gets 1,130 item enhancers when it takes 2,587 item enhancers to cap an item (level 30). But each pokemon can carry three held items, and you’ll obviously want to mix and match them for different effects. This is why some fans are breaking out their pay-to-win flags. I’m trying to ignore it for now as I’ve yet to really get such a spanking that I immediately cried “whale.” In fact, as probably a below-average jungler and so-so top laner (usually I play defense or all-arounders), I get a lot more wins almost a week after release than I do in other MOBAs.

It’s entirely possible that Tencent’s attracted a large enough audience and uses a good enough algorithm to separate whales and power players from casuals like myself. Again, not only do I often feel successful at the game, but I’ve seen myself make some solid comebacks, all after possibly goofing on my game-currency spending but dropping a grand total of $0 on the game, even though a battle pass and a few pokemon I’ve yet to unlock tempt me to open my wallet a smidge. Unite does give a fair number of free ones, even letting you pick your pokemon from the entire spectrum of roles. The skins so far don’t really speak to me aside from the new Gardevoir skin, but I don’t enjoy the character, so my wallet remains shut.

All of this still leaves out other currencies, like those specifically earned for fashion items or the ever-rare holo tickets for pokemon skins, neither of which can be bought.

For any MOBA players who frequent the site, I mostly can recommend Pokemon Unite as a good entry point into the genre. There are a lot of assist mechanisms, and masking scores does a lot to keep moods up.

The one area of contention, though, is the lack of a 2-for-1 pokemon a la HOTS‘ Cho’Gall. For those who are unfamiliar with the game and character, just know that Cho’Gall has one body controlled by two players. Think of a two-person vehicle with a gunner and pilot, though the gunner also covers the accelerator and the pilot handles close-range attacks. It’s really fun for new players, and as PU will work as a good entry MOBA, that’s exactly why a multi-person unit should have been in launch, especially with all the multi-headed and paired-up pokemon there are.

While TiMi Studio Group may be waiting until later to introduce one, perhaps when the game has a dip in the playerbase, there are so many pokemon this could work with that they could have introduced it immediately and possibly gained more players. Many of my pokemon friends are either turn-based players and/or older players, and even my slightly younger brother who still does hardcore WoW raiding loves to gun in HOTS whenever a promo pushes him into it.

Heck, TiMi could eventually go nuts and try to bring in Wishiwashi as a five-player potentially single unit pokemon that gets stronger the more separate players bands together. I can see how the IP lends itself to MOBA mechanics, and it’s fun, but it does feel a tad safe outside of the decision to obscure the exact scores and do away with damage-dealing towers.

Overall, the game is still accessible and has attracted players I didn’t expect to see. It would have been nice if the game carried over our Switch friends list (it uses another “friend code” system), but I still recommend that Pokemon fans who are into PvP give it a shot. MOBA fans may enjoy it too, especially if they want something quick and accessible and/or have non-MOBA friends to convert. For competitive players, I’m not quite sure what to make of the game yet, but we’ll see once the mobile version is out and we can all hopefully have a better sense of the potential pay-to-win situation by then.