I have a strange history with Guild Wars 2. I fell hard for the pre-launch hype, and when it finally arrived, I loved it and played heavily… for a couple weeks. Then I lost interest, feeling aimless in a game where I wasn’t invested in the story or the world. I’ve poked my head in a few times since then, but for all practical purposes that was the end for me.

END_OF_DOCUMENT_TOKEN_TO_BE_REPLACED
I’ve attempted returns to GW2 a few times over the years but always bounced off after an hour or two. Many years ago when I wrote for a different site, I said something to the effect of, “Guild Wars 2 is a great game that is wholly ignorant of its own strengths.” By this I mean so much of its post launch decisions — from raids to the Living World — have run counter to the freeform, casual play the game was built on.

However, a friend of mine is a big GW2 fan, and between a dearth of other things to play with her and the growing hype around End of Dragons, we’ve decided to start playing GW2 together about once a week. I’ve also done a little solo play, including checking out the recent elite spec beta events. It’s a unique opportunity to explore what it’s like to return to an MMO after a very long time away.

One thing that I’ve noticed right away is how big a difference playing with a friend makes. I know a lot of people say that playing with friends is always the best way to experience an MMO, but I’m a loner by nature. I usually play mostly solo, and even when doing group content, I tend to find the presence of other players at best a value neutral factor. I’ve never found playing with other people to make such a big difference in my enjoyment of a game.

Bluntly, it’s partly that Guild Wars 2 generally isn’t enough to hold my attention on its own. I like the combat and general gameplay well enough, and it does many things very well, but as I’ve said the story and setting just don’t do it for me, and that usually prevents me staying invested in a game longterm.

Chatting with a friend adds the missing piece to make it a fully worthwhile experience. It helps that it’s a fairly simple game, and the gameplay strikes the balance of being engaging enough to be fun but not so taxing as to distract from conversing with my friend. 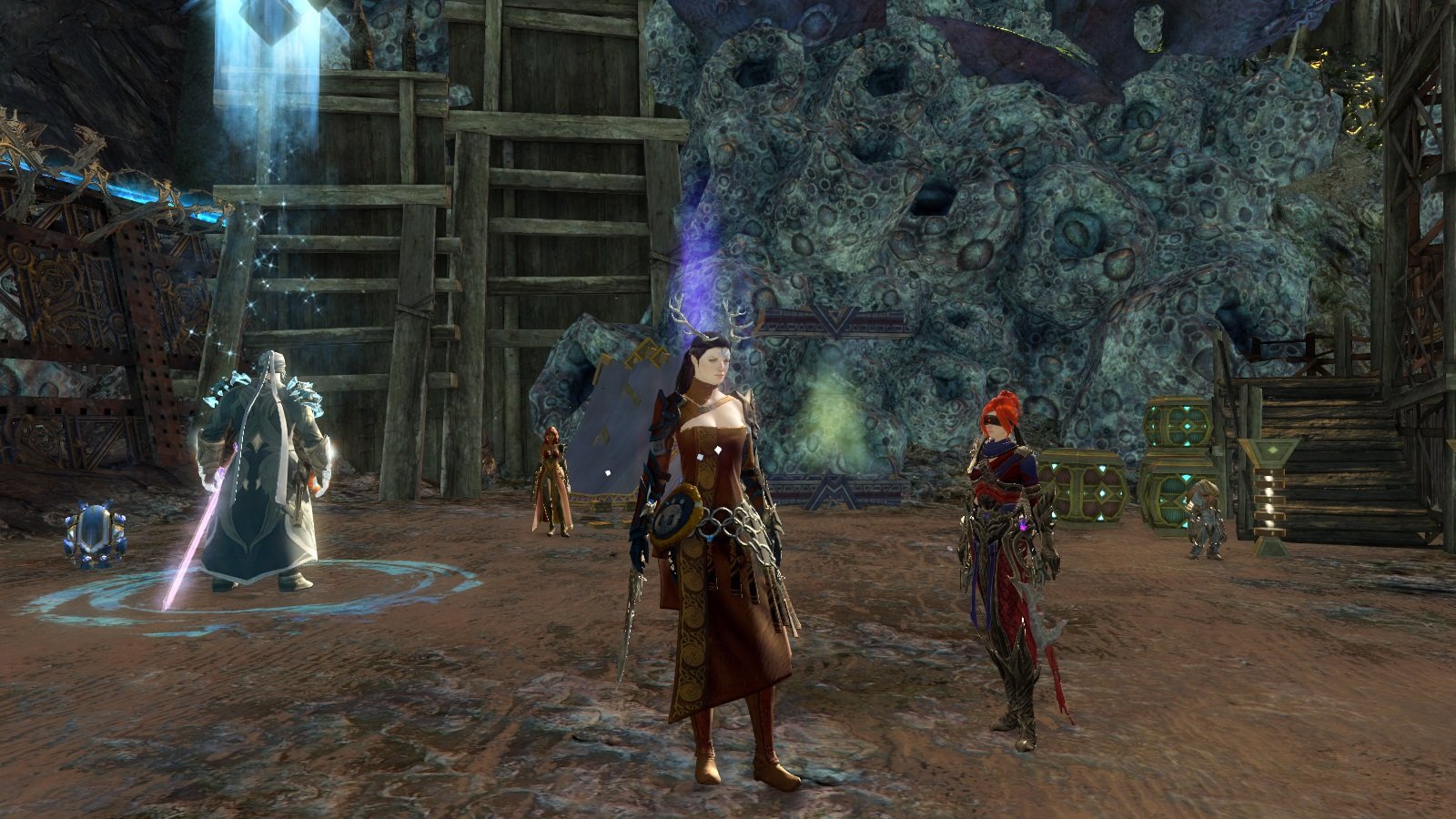 But also I find having someone to watch your back makes the game much smoother. I wouldn’t say GW2 is an especially challenging game, but the higher-level enemies and events are a bit over-tuned for solo play. Even the ostensibly solo personal story can be a bit of a slog on your own. It’s not difficult to complete the content, but it can be tedious. Having another person there makes it much easier to carve your way through the hordes of mobs this game loves to throw at you.

It genuinely feels as if playing with another person (or two) is what the game is designed around, and that’s not really something I can say about any other modern MMOs. Great for playing with my friend, but it does help explain why I bounced off before.

On the other hand, something I really do appreciate is how easy it is to get back into the rhythm of play. The design of my main class (Thief) hasn’t changed to any significant degree since I started playing. I’m sure the numbers have been tweaked over the years, and we’ll get to elite specs shortly, but the gameplay for the base class is essentially as I remember it. It’s not like World of Warcraft, where nearly a decade away would likely render a class so changed as to be unrecognizable.

There are new toys for veterans in the form of elite specs (more on those momentarily), but as a returning player, I can easily pick up where I left off. It’s the perfect balance, and other games should take note.

And that brings me to the matter of the elite specs themselves. We had quite a debate about elite specs in the Massively OP work chat recently. If I might oversimplify the debate slightly, some folks felt unlocking them presented an unwelcome barrier to new and returning players, while others felt that leveling is so trivial in GW2 that it doesn’t matter, or that letting people play elite specs off the bat might be a trap for new players.

I think there’s some good points on both sides. I’ve always felt that horizontal progression like unlocking new playstyles is much more appealing than vertical progression like disposable gear, and that’s what elite specs are, so in theory I should be a fan… but I gotta say as a returning player the grind to unlock them still kind of rankles. 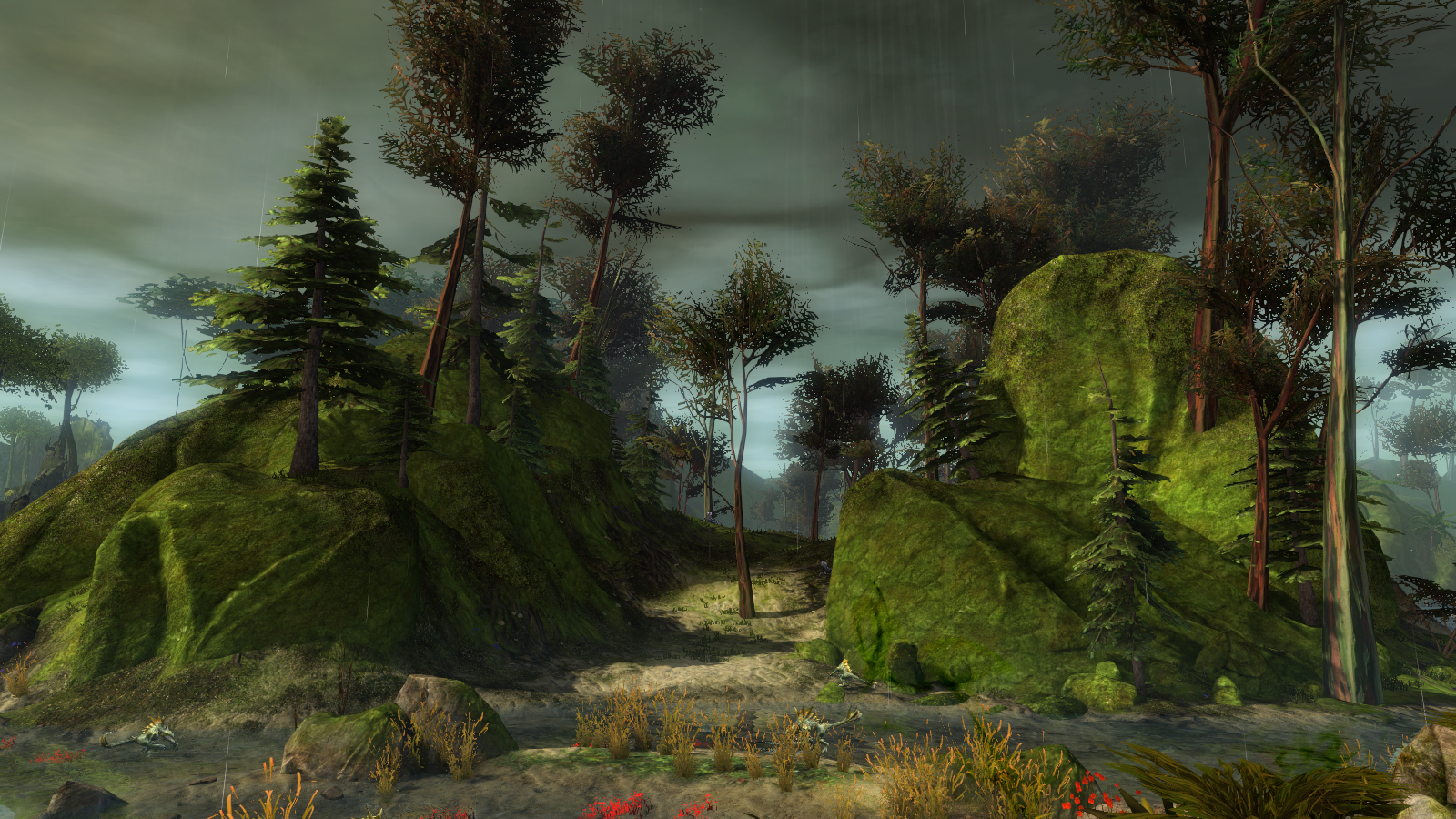 It is true that leveling in GW2 is quicker and easier than almost any other MMORPG, but it’s still not nothing… and that misses the whole point anyway because the barrier is not leveling so much as it is hero points.

I spent all the hero points I’d accrued on my main, and I still got far enough into Daredevil only to render it barely functional. As a level-capped character still doing base game content, hero points come very slowly, so unlocking the rest of the spec — to say nothing of other elite specs — feels daunting.

I’d heard something about hero points being more common in Heart of Thorns and Path of Fire content, and I’d already unlocked POF for the sake of a mount, so I tried farming some points there, but it was still painfully slow, in part due to the hero point sources being so often gated behind various mount abilities I don’t have yet. It really feels like you’re meant to play through the whole expansion as a single unit. And that’s fine, unless you’re a raw recruit who wants the elite spec sooner rather than later.

This is one of the best examples of GW2 working at cross-purposes to itself. So much of the gameplay is all about jumping in whenever and wherever, but the content is deadset on everything being in a linear order.

It’s also worth noting that absolutely nothing in the game tells you hero points are more plentiful in expansions. Any new or returning player who’s less plugged in than me (which should be most everyone as I write about these games for a living) is unlikely to even know there’s an quicker way to get the elite specs.

I’m also not sure I agree that elite specs would be confusing or overwhelming to new players. While I haven’t made an exhaustive study of them, most of the ones I’ve tried so far are not noticeably more complex or challenging than the base game’s builds. At least one of End of Dragons‘ currently previewed elite specs (Mesmer’s Virtuoso) is significantly simpler than the base class. So I really don’t see any reason why new players shouldn’t have the option to dive straight into elite specs. 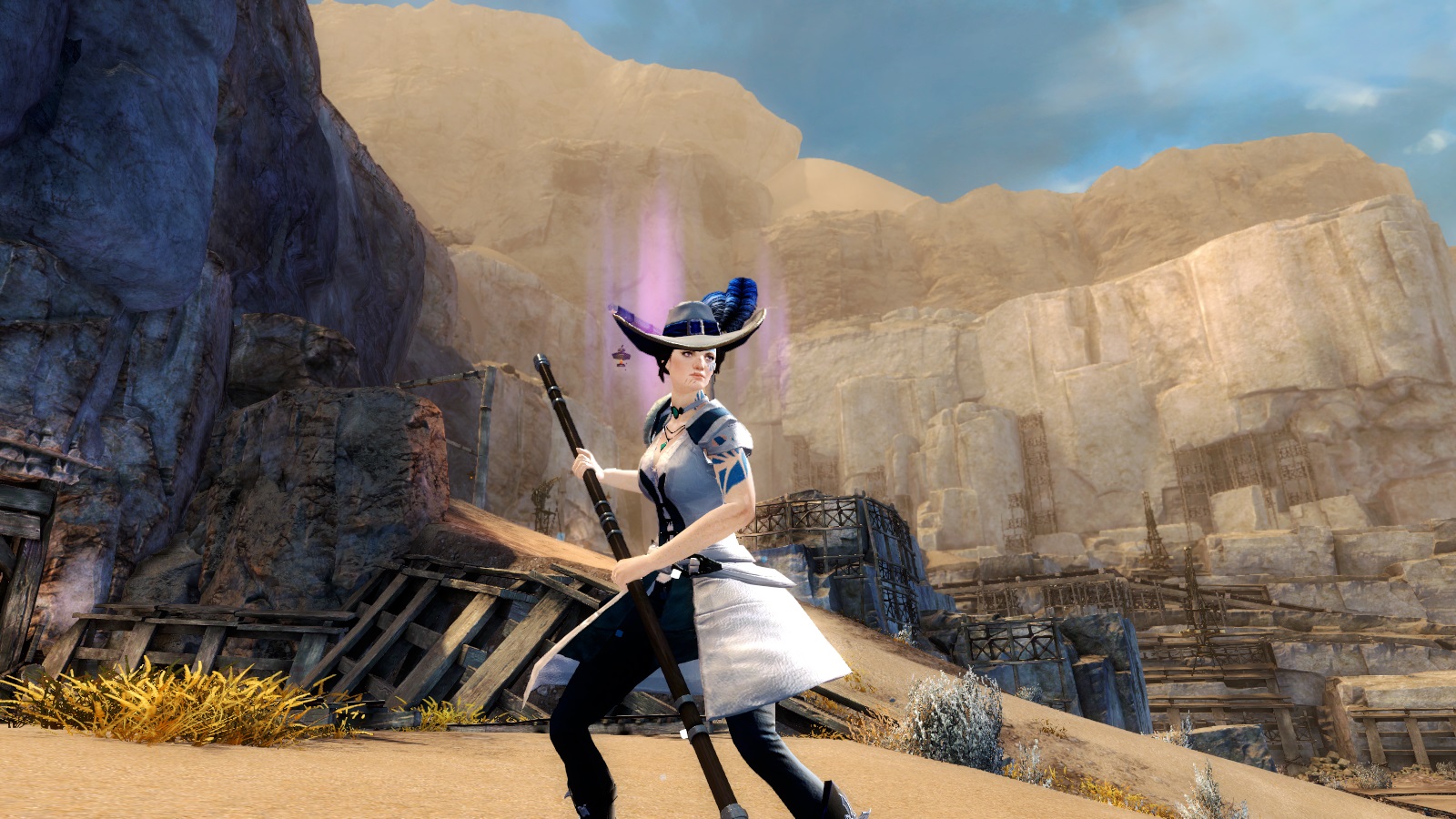 The one advantage I do see to the current system is it gives veterans something new to unlock, but that doesn’t need to come at the expense of the rest of us. My preferred solution would be to keep elite specs roughly as time-consuming to unlock, but without tying them to levels or hero points. Make them something anyone can work toward at any time, maybe with special quests or collections.

But I suppose that wouldn’t sell expansion boxes.

Anyway, I don’t hate the elite spec system, although it’s rough around the edges. In terms of my specific elite spec, I’m pretty happy with Daredevil so far. Of all the builds on all the classes I’ve played in GW2 to date, it feels the most complete and cohesive. I find myself using almost all of my staff skills intelligently to make use of their debuffs and movement effects, instead of just spamming my best nuke like I did with my previous Thief build.

I say at least one basic mount should have been available for everyone even earlier, prior to the start of the storyline. It’s fine if some of the fancier mounts are gated behind Path of Fire‘s story, but not all of them.

That said, the mounts in this game are really great. This is a case of building a better mousetrap. The movement of my raptor feels so much more fluid and natural than mounts in other games, and the mount abilities really add some spice to the experience.

One final new system that has enriched the game for me is the action camera, which allows GW2 to function as an action combat game a la Elder Scrolls Online or Neverwinter. Bizarrely, there’s no advertising of this feature in-game — it’s buried deep in the settings — and it seems to have been added with little or no fanfare. I only found out about it by accident while Googling something unrelated. 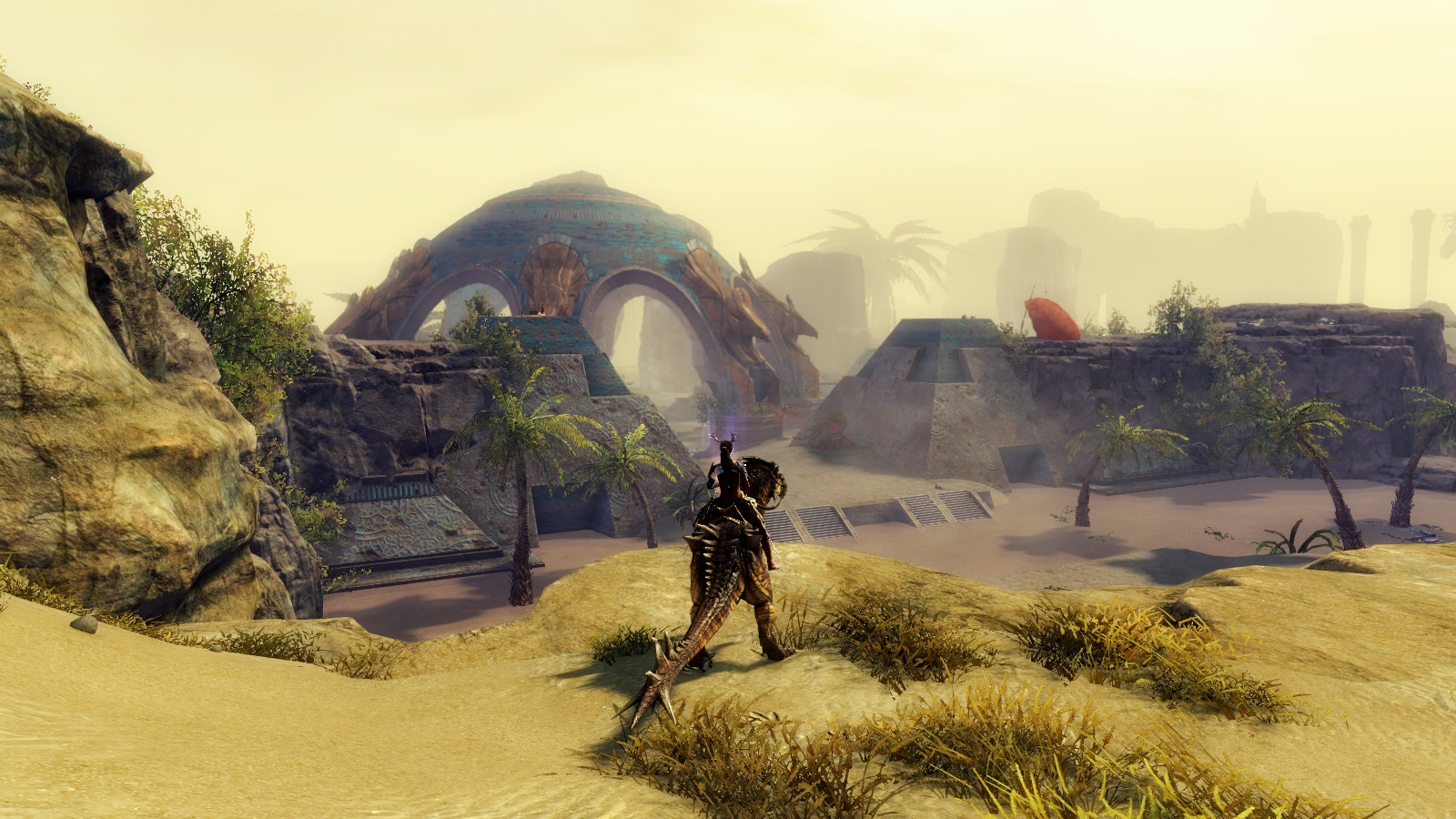 But man, it feels great. It’s personal preference, I suppose, but being able to freelook to target enemies and use my basic attacks with the mouse just feels so much more natural than GW2‘s standard tab target system.

Overall, my opinion of Guild Wars 2 hasn’t much changed. It’s a mostly solid game with many excellent designs somewhat hampered by minor but constant self-sabotage. For now, I’m having fun with my friend, and that’s enough.