Our not-particularly-massively-multiplayer news has started to pile up, which means it’s time for a quick run-down of games in the MMORPG genre’s orbit. We’ve got some real whoppers today.

Riot vs. toxicity: Riot Games has always given the appearance of being willing to try anything to stymie toxicity in its games, and apparently it will even try just shutting everyone up. We’re only somewhat kidding; the company is disabling “/all” chat in matchmade queues in League of Legends as a test in patch 11.21, arguing that “negative interactions” in the mode currently “outweight the positives.” “We’ll evaluate the impact of this change through verbal abuse reports and penalty rates, as well as surveys and direct feedback from you all,” the studio says.

“[W]e’re aware that verbal abuse happens in team chat too, so disabling /all chat won’t get rid of abuse altogether. But team chat also plays an important team coordination function, so the potential value it brings is much higher, even if it can also host some negative experiences. We know this sucks for those of you who just want to compliment your lane opponent’s skin, or ask for a dance party in Baron pit. But we believe the tradeoff is worth it to cut down on the growing negativity /all chat has been creating in your games.” 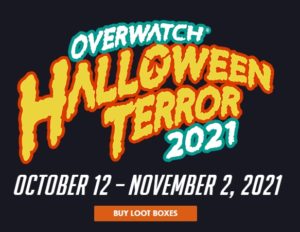 Overwatch Halloween Terror: No, it’s not another lawsuit; it’s actually just the regular ol’ terror of Halloween. “It’s time for another year of fear—Overwatch Halloween Terror is back! Celebrate this horrific holiday with weekly rewards and the return of Junkenstein’s Revenge. Play to earn Overwatch Halloween Terror Loot Boxes and unlock bewitching cosmetics so you can send your enemies to their graves as Coffin Bastion, bring the fright mid-flight as Vampire Bat Echo, raise the stakes as Vampire Hunter Brigitte, and more. With new loot to obtain each week, can you survive the tricks to earn your treats?” Also, “buy loot boxes.” Buy them. (Don’t buy them.)

Fortnite vs. Among Us: Remember when Epic Games basically took Among Us, down to some of the verbiage and art, and shoved it in to Fortnite as a game mode without any mention of its provenance? Apparently, Epic has been shamed into acknowledging the inspiration, as today’s Fortnite’s update includes the line that the mode was “inspired by Among Us from Innersloth.” A good first step, if terribly belated.

PUBG Halloween: The pioneering battle royale title is prepping a Halloween party for the season. The trailer is… something. It’s definitely something.

Paladins’ Azaan: Hi-Rez’s Paladins took the wraps off Azaan, The Eternal in a new trailer today. The character launches in November.