END_OF_DOCUMENT_TOKEN_TO_BE_REPLACED
In Path of Exile’s history of consistent, regular updates, sometimes there is a larger focus on the league, and sometimes its on the expansion itself. For next week’s Siege of the Atlas, it’s the latter. While there is definitely a new league (Archenemisis), the bulk of the new content is aimed at the full game itself — specifically, the endgame. On February 4th, players will get to experience an expanded and revised Atlas, a greatly expanded Atlas passive tree, and multiple bosses.

The story of the Atlas

Longtime players will recall that the endgame content known as the Atlas first launched in 2016 as Atlas of the Worlds. Siege of the Atlas is the fourth expansion since then building upon that base, following War for the Atlas, Conquerors of the Atlas, and Echoes of the Atlas.

Storywise, this expansion picks up after Sirus has been defeated and Zana left for her own reasons. This left only the Commander Kirac to guard and defend the atlas. Kirac moved map devices and establishes a militia in order to prevent a repeat of previous catastrophes. As a player, you join this militia and scout throughout the atlas for threats. And yes, threats you will find!

After encountering the Maven, lo and behold you discover that not one but two more Eldritch Horrors are on their way, each with its own sub boss. And The Searing Exarch and The Eater of Worlds have one agenda: to devour absolutely everything. Of course, you need to stop this, so you learn about these two and work to destroy them and their sub bosses, Black Star and The Infinite Hunger. (That last one sounds like a teenager!)

There are some very big and distinct differences to working through the atlas this time around. For one, there is no need to choose which Eldritch horror to pursue because you get to go after both! Previously, the path was set towards one, but here players will choose which boss to pursue on a a map-by-map basis. This means that both bosses can sought after as you traverse the atlas. Another is that regions have been obliterated, and all maps are visible.

In mid-tier maps, players will randomly encounter the influence of either The Searing Exarch or The Eater of Worlds. Using the map device before entering, you’ll modify the map to add any Eldritch Horror influence you have encountered (including the Maven). In the maps will be altars that give players the choice alter the difficulty and rewards of the maps. Subsequent influenced maps will increase the amount of influenced monsters, signifying that you’re getting closer to the boss. Defeat the sub-boss with its special loot pools, and then continue on.

At the highest tiers of maps is where you will encounter the Eldritch Horrors themselves. Defeating them gives new special unique items and Eldritch currency. If you want to farm the bosses, complete a series of tier 14 and higher maps of that influence and get the key to face off against the sub-bosses again. Defeat that, then repeat for another series of tier 14+ maps, and you’ll get a boss key. Note: These keys are actually tradeable! As Wilson told me, “The keys to the farmable versions of these bosses can be rolled like regular maps, but with their own mod pool. This allows you to control the difficulty and rewards even further.” 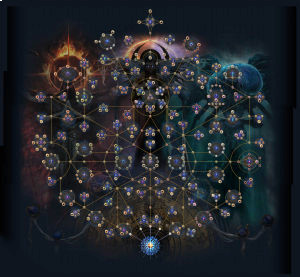 With no regions on the Atlas, there can be no regional Atlas passives. Instead, we have one giant passive tree in its place. Wilson explained that there are over 600 passives available, and players can earn 117 Atlas Passive Skill Points by completing the Atlas. A skill point applied will affect the entirety of the atlas. “Because it’s much faster to complete earlier maps on the Atlas, your Atlas point acquisition is pretty frontloaded, letting you quickly establish an Atlas layout that helps you find and profit from your favorite content,” he says.

Old skills are there, along with some new ones, including Secret Operations (drops new strongbox with scarabs), Corrupted Gaze (Abyssal jewels can be corropted and have five or six slots), and Ghastly Devotion (guarantees four ritual altars in an area).

One difference between this expansion and others is that the new league doesn’t have a monopoly on the new uniques — they are in the regular game. There will be plenty to collect, and these uniques drop from the new bosses in the Altas. (Definitely watch the video above for details!)

The implicit modifiers for Siege of the Atlas come in both boss flavors. And even better, you can have both an Eldritch implicit from The Searing Exarch and one from The Eater of Worlds at the same time! Use the new Eldritch Ember and Eldritch Ichor currencies to apply to gear and overwrite the regular implicit mods with the new ones from new mod pools. There are six tiers of power for these new mods, and players can manage to have a tier 6 of one and tier 4 of the other on each piece of gear. Best of all, these modifiers are available earlier in the maps than those of yore.

As for watchstones, those are gone. Voidstones are taking their place. With the hidden maps back on the base Altas, there’s no need to unlock them with watchstones anymore. However, to ensure maps can still be modified to tier 16, POE will introduce voidstones. Players can earn four of these, one each for The Maven, the Uber Elder, The Searing Exarch, and The Eater of Worlds. Putting these voidstones in the Atlas will raise the tier of all the maps of the Altas, eventually going all the way up to tier 16.

OK, maybe this doesn’t deserve a category all its own… oh whom am I kidding, of course it does! Stash tabs are a big deal in POE, and specialized tabs have come to help tremendously in keeping things organized. The two new stash tabs will be for flasks and for gems. For gems, you can store and sort up to 500 gems! A dropdown allows for sorting by color, level, required level, or quality.  The flask tab also holds 500 and filters to show life, mana, hybrid, utility, and unique; it also sorts between item level, base type, and quality.

You don’t have to purchase the new stash tabs to have benefit; players can also set up affinities for gems or flasks on their current tabs. 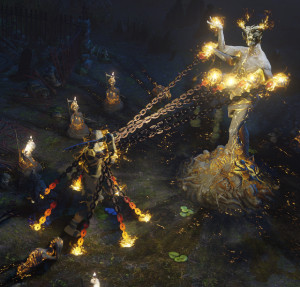 As a challenge league, Archnemesis all about fighting rare monsters as you go along. And as in in the Metamorph league, you get to create your encounter. This time, however, players are using monster mods they get to add into the fight. Wilson explained to me that there are around 60 of these new monster mods, and they can be also combined into over 35 recipes to create more powerful — and of course, more rewarding — monster mods. These mods are currently kept in a special inventory that is 5×5, but Wilson noted that it is likely increasing to 8×8.

Players will encounter the four monsters petrified and bound to an Archnemesis statue while exploring the maps. Free the mob by empowering it with a mod. The trick is, as you go, each mod in that area is added to the one before, increasing the difficulty and the reward. Basically, you get the initial reward again plus the new one. As Wilson put it:

“By the time you defeat the fourth monster, you’ll have received the first reward four times, the second reward three times, and so on. Take care when picking what order you consume your mods so that you can maximize your rewards.”

If you choose to play Archnemesis on the hardcore solo self-found server, there will also be a launch boss kill event. This is a competitive event to see who will be the first to kill The Maven, The searing Exarch, and The Eater of Worlds. Wilson said there are some interesting prizes in store, so keep an eye out for details next week!