Console fans rejoice: After a lenthy beta-testing period, PlanetSide 2 finally launched on the PlayStation 4 in both North America and Europe today. Now folks who don’t want to want to sit at their monitors to play this MMOFPS can hunker down with their PS4s and televisions to join the ongoing war that their PC counterparts have been participating in for the last couple of years. Interestingly, what those players will see when they log in is not exactly what they expect. I sat down with Andy Sites, the game’s director of development, at E3 2015 to discuss what awaits when players jump into the game on their consoles.

Since the dev team emphasized at last year’s E3 that the games would be following the same development path, those familiar with the PC version will know pretty much what to expect, with the exception of the UI and controls. Those who interacted with the game on the floor at last week’s convention and those who’d been playing in beta also have a pretty good handle on what they’ll find at launch. At least they all think they do! However, Sites emphasized that all those folks don’t have the full story. 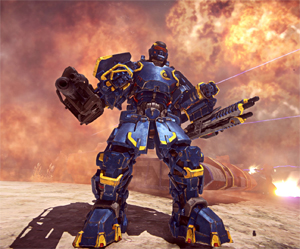 Sites said that the build that everyone has been playing was around five weeks old and that launch would have the newest one. “There’s a ton of vehicle control improvements, performance improvements, bug fixes, and UI refinements. There’s a lot of polish going in,” he said. He added that many of the issues that beta players had pointed out as needing attention before launch were actually addressed– just not in the beta build they had access to. He also emphasized that as an MMO, the game isn’t finished at launch and will continue to be updated with new features “quite frequently.”

What are the first features planned for the updates? Sites noted that the team wanted to get a new version of the outfit system in soon. “Our goal is to focus on all the squads and outfits, the cooperative play features because the game is all about team play.” He also said there will be holiday events and the like going on.

One big departure between the two games is the new-player experience. The PS4 version has a special starting area made to give players a chance to get acclimated to the game and the controls before being throw into the fray with super-high level players. Sites explained, “The goal is to give new players the opportunity to learn the ropes and not get shot like fish in a barrel like what can happen when you start as a new player on the PC.” This new continent, called Koltyr, is only about two kilometers by two kilometers in size (as opposed to the eight by eight kilometer regular continents) and only holds 100 of each faction. Furthermore, this continent is level locked at 15. Although a player can move between the full continental maps and the starter one between battle rank 1 and 15, once the player has reached 15 s/he is kicked out and cannot return. Conversely, a player does not need to stay on this continent and can instead opt to jump right into the thick of things from the get-go and be immersed in the full massive experience that 5K players on each server will offer.

Another benefit of this starter continent that Sites pointed out is that it is the only part of the game that has to be downloaded on the PS4 (a much smaller chunk than the entire game!) before players can jump in. Then the rest of the game can continue to download in the background while players are playing. 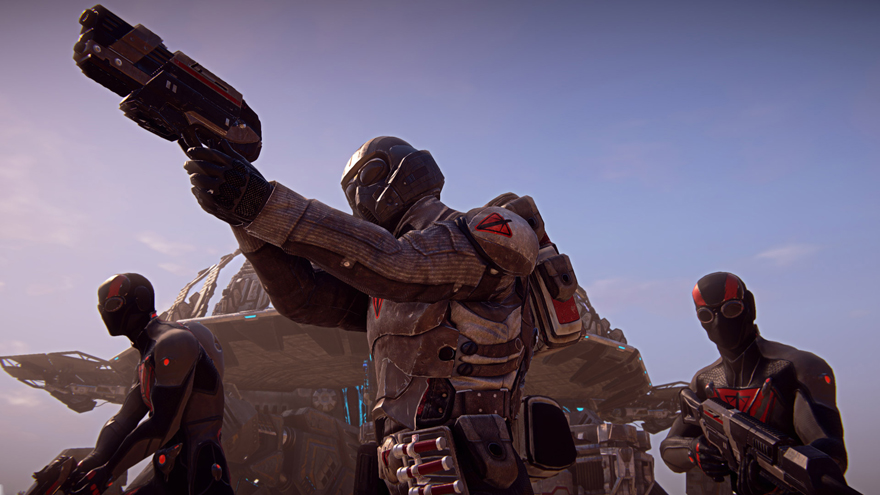 Sites explained that the PC has not yet gotten a version of this because it hasn’t had the influx of new players to sustain a separate continent like the console will. However, after some time on the console and some refinements, the plan is to move it over to the PC version as well. Sites also mentioned that there is a conquest mode feature currently on the PC’s public test server that is a special 200v200v200 60-minute battle that concludes when either all the bases are captured by one side or the timer runs out (and the faction with the most points is declared the winner). Players will earn cert bonuses and items from these battles. This mode is an alternative to the hours-long battles that can take place in the open map. Once this feature is ironed out on the PC, it will be implemented on the PS4.

Speaking of moving things between the console and the computer, another migration involves the slimmed down UI. Sites said that the streamlined UI of the console version will start to be moved over to the PC in the next couple months. Interestingly though, he noted that a couple of elements have already been moved over, though some hardcore players have resisted that change. As time progresses and these items all iron out, the goal is to get the PC and PS4 versions running parallel and updating within a week of each other.

Because it’s a game ur playing, not writing a something like u do with a keyboard.

infinitytool BalsBigBrother PC’s where not designed for gaming in general while consoles are designed for gaming for a PC you need to either buy a pre-built gaming machine or build one yourself. Am both a PC and Console gamer and I tend to find console gaming to have better experiences and all my PC is good for is the graphics and my job in my opinion. I grow up with the megadrive graphics so graphics don’t effect my gaming and my ability to be a gamer. Also saying this as a gaming PC owner, PC modded games destroy the purity of games.

And I will defend this point of view it proudly with me till I die.

better build? well I have yet to see that build.

infinitytool people should play the games on whatever platform suits them and  they have fun with. It matter not to me it that is a PC,  PS4, Xbox One or their ancient ColecoVision, as long as they are gaming and having fun then its all good.