END_OF_DOCUMENT_TOKEN_TO_BE_REPLACED
It’s pretty much a rule of nature that at least one game is going to be far better and more fun to play than I expected on the PAX East show floor. This has been true every year, and while the past couple of years have involved my spending a bit less time on the show floor overall, I’ve still walked away with some surprises. This year, it was Kritika Online.

What I expected from Kritika Online was… well, nothing particularly impressive. I didn’t expect it to be bad, but that was because I didn’t expect much from it at all. It was a game that En Masse was bringing over that sounded, at a glance, like the sort of game which fades from memory shortly after you play it. What I actually got was a game that has a clean purpose and remarkably fun mechanics, like the pure product of an MMO marrying a Dynasty Warriors clone.

For demo purposes, we were arranged in a group of three. I played the Berserker, which means that my love for you is like a truck and I also specialized in running in and hitting things without any regard for my personal safety. Which, let’s be real, was pretty much what I was planning on doing anyhow, so that worked out nicely. My fellow demo players were playing what amounted to a rogue and a mage, as the game is very much in the roguelike vein of self-sufficient damage dealers rather than having dedicated tanks and healers.

Then we started the first dungeon, and it started with a huge army of monsters between us and the next portal. Have fun.

Essentially, Kritika Online in PvE mode is very much set up like the stripped-down form of dungeon content. You have several rooms in a dungeon, and each room requires you to kill everything therein, with a split between trash fights and minibosses. Several encounters have specific mechanics for players to watch, lest you get smacked upside the head by some particularly nasty ability or otherwise lose the fight. It is, in every way, a microcosm of what dungeon experiences can be.

Some people are going to dislike that approach, I’m sure. I’ve always been of the mind that this is the heart of what makes dungeons fun, though, that you have several discrete moments with a mechanical theme and challenges for players to overcome. This was literally trimming out everything except for those moments, so I’m more than willing to meet the game halfway in that department.

Of course, the style wouldn’t work if the game didn’t control well, and I will admit to having a touch of trouble with the controls simply because I’m so accustomed to having all of my controls work with the thumb pad on my mouse. That was my fault, not the game’s fault. The game itself was very clean and responsive, and it succeeded at the critical element of letting me feel suitably capable of dealing with things in a responsive fashion. It was occasionally difficult to pick out when I was taking damage, but the big impacts had suitably big indicators, and my class meant I was supposed to take some degree of damage. 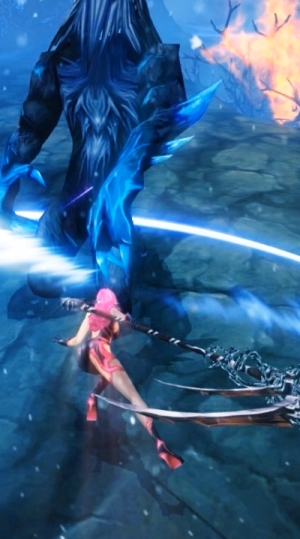 So the game comes down to how fun the mechanics actually are, and while we were glossing over things at high speed, I feel comfortable stating that yeah, these pocket boss fights are pretty well tuned. Most of the bosses feature at least two or so mechanics, and they’re the sort of mechanics that are both straightforward and fun. Like killing a few lumbering adds to provide safe zones as necessary, or dragging a boss away from her protective veil of zombies, or beating the living heck out of animated teddy bears.

None of them were hugely challenging to learn, but they didn’t have to be. They had to be interesting enough to turn a minute of fighting into an interesting minute, and on that mark they succeeded brilliantly. We finished our first dungeon with a B rating and our second with a double S rating, which is the highest possible rating; your rating affects your possible rewards at the end of the dungeon, although there’s still an element of randomness.

I had a chance to ask a few questions about the game after the demo was done. The game will obviously launch as a free-to-play title with four initial classes available to players, but the team isn’t ready to discuss the specifics of how the game’s business model will work beyond that, whether you’ll be able to buy cosmetics, more classes, more dungeons, or what. About the only firm thing to be said was that it will be a game you can sit down and play extensively even without paying money, which is a bit of a hefty promise to make but also one based heavily on the core game mechanics.

Obviously, the game is being brought over in no small part because it does line up nicely with the existing En Masse catalog, specifically TERA. However, the two games might share an action focus, but they have very different gameplay concepts beyond that. TERA is much more a game about big, elaborate dungeons and lengthy experiences, while Kritika is clearly a game about blasting through dungeons at high speed. The game is streamlined and meant to focus on delivering big fights at high speed.

Despite this, players will still have a hub town to wander around and places to interact with other players, so you needn’t worry that the game won’t feature any sort of social interaction beyond standing in front of people while smashing stuff.

You also shouldn’t need to stand in front of people at all if you don’t want to; the game’s four classes will all functionally be damage dealers, and the game doesn’t offer tanks or healers or support. It’s an action game, first and foremost. That doesn’t mean you’re disinclined to play with others, though; it just means that you can play how you want, and teamwork is encouraged to make things easier rather than necessary to accomplish anything.

The game also will include PvP options as well as its PvE dungeons… but we don’t know what that will look like just yet. All we know is that it’ll be depicted as the game gets closer to beta testing and launch, so you can expect more information as the months go by.

If it hasn’t been made clear enough yet, I’m really quite impressed by Kritika Online. One of the things I’ve frequently noted about various titles is that they seem perfectly set up as side games, something to use as a small diversion before doing other things. Kritika Online isn’t just that sort of game; it’s that sort of game with a structure that specifically encourages logging in, playing for half an hour, and then logging out. So I’ll be keeping a close eye on it as we get closer to launch.

Massively Overpowered is on the ground in Boston for PAX East 2017, bringing you expert MMO coverage from ZeniMax, Square Enix, Funcom, and everything else on display at the latest Penny Arcade Expo!
Advertisement