Remember last June when Camelot Unchained startled everyone by announcing it was opening a second studio in Seattle? The team out west has been working on the game for many months now, but finally, it’s getting a home.

“The crew out in Washington now have an office space they will be moving into at the start of next week,” the game’s latest newsletter reveals. “After quite a journey, the lease is signed, the moving can begin, and maybe we’ll even convince them to appear on our streams a little more often.”

Also, may we say that this particular developer has impeccable taste in vintage 2015 t-shirts featuring a mascot rather near and dear to us: 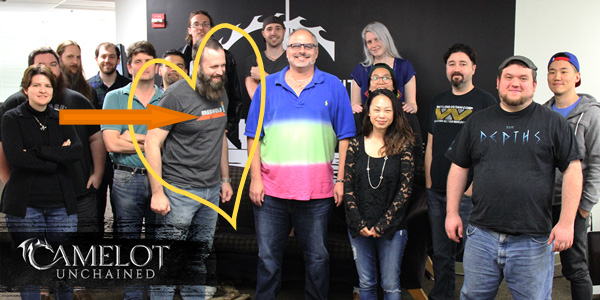 The newsletter also features a deep-dive into the way the player-constructed ability system is being integrated into the game, the art team’s progress on the UI and animations, and a look at how CU will support HDR monitors with its HDR lighting system.

Mark Jacobs looking so un-hipster in his brightly colored polo.

Should have leased a place in Olympia, far cheaper and just as nice. Seattle is extremely expensive. Plus Seattle is tax crazy, your sewer is going up 23% over the next 6 years alone.

And welcome to the rain state.

Good to see that you’ve made major headway on that front.
It’s all coming together piece by piece.

That’s just going to have to be put on a t-shirt for the team and you.

Yep. Spent time dealing with insurance brokers. 7:41PM and just fired off what should be my last email/phone call till Monday.

If i knew where the office was I’d drop off a few dozen donuts as an officewarming gift. Glad to see another studio taking off here in the Emerald City.

Hey, appreciate it! Maybe the next time I visit Seattle?

The UI discussion was also nice to watch & reveals a neat UI animation.

Yep, couldn’t agree more. Nothing like a live, unscripted art review in front of our Backers? What could possibly go terribly wrong or terribly right, right? :)