“What could have been” is a path that I travel frequently, especially when I write The Game Archaeologist column. It genuinely haunts me that so many interesting MMORPG ideas were tanked because of collapsing studios, fierce competition, studio mismanagement, and lackluster tester numbers.

Over the past few decades, there have been so many MMOs that died in development, and I’m convinced that at least a few of them would have been real classics if they had made it to the starting line.

A while back I drew up a list of hit franchises that were almost made into MMORPGs, so today I want to do a companion list of original IPs that never came to be. In a different timeline, we might even be playing these today. Who knows?

The freshest wound on this list, the demise of Daybreak’s EverQuest Next project is sore for so many reasons. We were seriously excited about seeing what this next-generation EverQuest MMO would be like, especially as the studio touted semi-intelligent NPCs, collectible classes, and a voxel-based landscape. Ultimately, the studio said that the game wasn’t gelling and that the technical hurdles were too great, but that’s quitter talk in our book. Double-quitter talk, considering that EQ Next’s demise also contributed to the downfall of Landmark.

Let’s keep the focus on Daybreak/SOE for now, because the studio talked up The Agency like nobody’s business (well, it was their business). This was to be a multiplayer spy shooter that would send teams of players on all sorts of James Bond-esque adventures. Gear would swap out players’ ability set, and aliases would help spies get through stealth areas undetected. It was an interesting concept, but in 2011 SOE canned the project as it laid off a third of its workforce.

On retrospect, Imperator Online wasn’t the worst idea that Mythic Entertainment ever had. Fusing together science fiction with a Roman Empire-never-died theme is pretty interesting and offers a lot of possibilities for a game’s design, structure, and aesthetic. It would have been interesting to see Mythic produce a PvE-centric MMO, but instead it spun down Imperator in 2005 to focus on the newly acquired Warhammer Online.

Out of all of the could-have-beens in the MMO idea drawer, Ultima X Odyssey is the one that I personally would have wanted launched. The second sequel to Ultima Online had a great visual style, tricky moral choices, and a huge world that got very close to completion. If it had launched in late 2004, it would have gone head-to-head with World of Warcraft and EverQuest II, which might have made for an exciting scene. Of course, it might have gotten steamrolled just as SOE’s sequel was.

In the 1980s and 1990s, Simultronics was a pretty big name in the text-based MMO scene with titles like GemStone III and DragonRealms. In 1999, it attempted to break into the hot new graphical MMO scene by starting development on Hero’s Journey, a game that pledged to move the genre forward with meaningful choices and an emphasis on fun rather than grinding. However, Hero’s Journey languished in development hell for a decade before it was officially retired in 2009.

Back when Funcom used to be in the MMORPG business — versus whatever it’s doing right now — the Oslo studio had another title in development that never saw the light of day: Midgard. It was all about vikings and war, although there was an interesting element of city management and building as well. Ahead of its time? Perhaps.

The horrid crash-and-burn of 38 Studios and Curt Schilling not only put a whole lot of good developers out of work and created a financial fiasco for Rhode Island, it also deprived gamers of seeing Project Copernicus (a working title) come to fruition. The MMORPG follow-up to the single player Kingdoms of Amalur, Copernicus was to be a huge, splashy, big-budget fantasy world. Major talent was brought in from both within the MMO industry and without (including artist Todd McFarlane and D&D novelist R.A. Salvatore), but sadly it got sold off when the company went belly-up.

Microsoft has had a weird history of greenlighting and then cancelling MMORPG projects. Probably the most famous of these is True Fantasy Live Online, an Xbox MMO from the early 2000s that was being developed by Japanese studio Level 5. The cel-shaded online RPG was meant to be a killer app for the Xbox Live service, but conflicts between the publisher and developer eventually led to a dissolution of the effort. 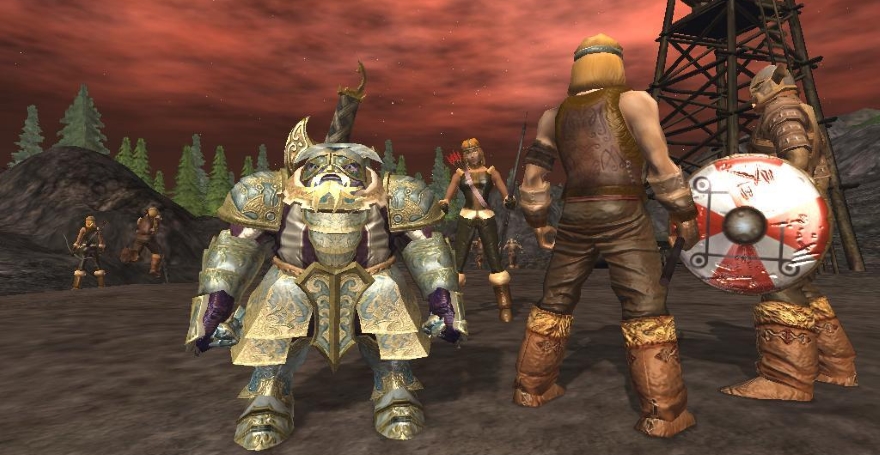 Hey, it’s another Microsoft MMO — and another viking game! Mythica was a here-today, gone-tomorrow project that existed only around 2003 and 2004 in which players were to take on the role of Norse gods-in-training battling and adventuring their way into the pantheon. Microsoft also teased the possibility of private realms (of a sort) and a motion picture spin-off.

Another mid-2000s project, Wish came from a smaller team that promised a single server for all of its players. The devs also made a flexible toolset that would let them create and drop quests into the world in minutes, making the environment feel more dynamic than in other MMOs. Despite a popular beta, the studio abruptly shut down the game without a clear explanation. There is widespread speculation that something happened behind the scenes, including “overhype” and players who abandoned the test in droves.