Looking back at March’s digital sales, the industry was up 15% year-over-year from 2016, Superdata Research reports. Mobile was the largest area of growth, while PC revenues remained “relatively flat.”

The report noted that Blizzard is having a mixed spring. Overwatch was overtaken (see what we did there?) by Counter-Strike: Global Offensive for the first time since its launch, while HearthStone rebounded from February by doubling its sales.

As to MMOs specifically, World of Warcraft, Dungeon Fighter Online, and Lineage I were joined by Chinese title New Westward Journey Online II in the top 10 of PC sales. Destiny continues to hang out on the console top 10, while Lineage 2 Revolution joined the rankings in the mobile category. 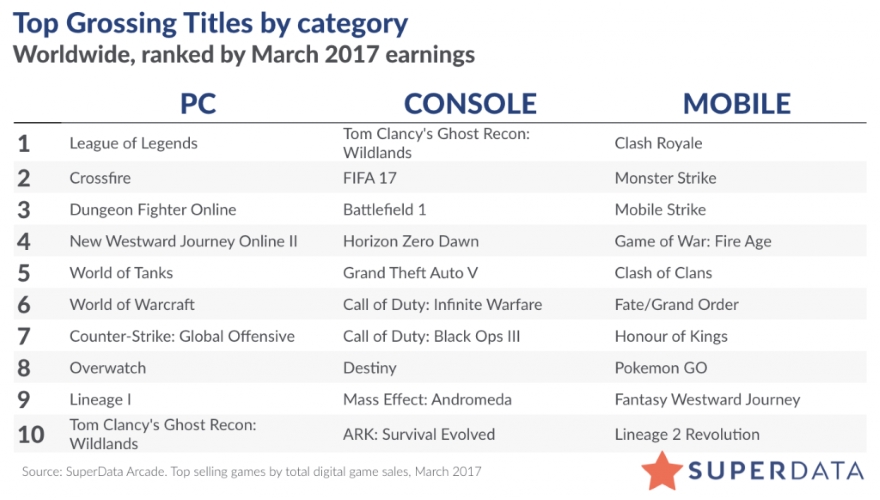 I think we need to start these articles with a new disclaimer. SuperData research is no guarantee of future, present or past performance.

How is World of Warcrap still in the top 10?

have you played many mmorpgs? There really isnt a big selection of quality ones out there. A large selection, sorta… but quality? No.

Most people who are surprised that WoW is still popular long after they have stopped playing it seem to forget that the next generation of gamers steps in to take their place after they quit playing.

Yeah. Jeremy G in a Wildstar launch said MMOs lose 10-15% every month. So now that means one person is leaving WoW every four seconds but a new person joins about every 4.? seconds.

Filter Bubble. Eli Pariser in his book: users get less exposure to conflicting viewpoints and are isolated intellectually in their own informational bubble.

There was a recent article here that referenced the decline of WoW. You run the numbers, take the 3M bump they got, factor in the inevitable decline and WoW’s % of the [Western PC] MMO market is probably up or at worst unchanged from a year ago.

Because they are the kings. The end.