What do you get when you ask MMO players with bulging folders of screenshots to pick their very, very best to show off? An absolutely amazing array of visual delights, that’s what.

Zyrusticae kicks off our look at the MOP community’s best-of-the-best screenshots with this view of what I think is Blade and Soul: “Just one? Really? Just the one? Boy, you really know what to say to induce absolute decision-making paralysis in me, don’t you? Well, after much deliberation, I just realized that it had to be this one. There is no other shot that gets my attention as much as this one does. The absurdly saturated, bright blue color palette in contrast with the autumn colors… yes, it does my heart good.” 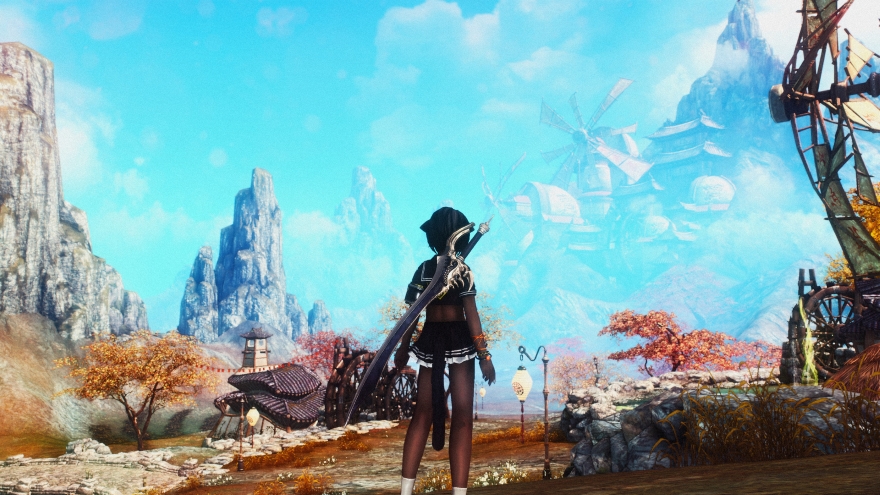 “My friend and I were playing with /gpose a while back in FFXIV (as we often do),” said Kawaii Five-O, “and got the idea to take screenshots with the theme of looking like a movie poster. This sort of melancholic looking scene is what I ended up with and is one of my favorites.”

It’s now one of mine, too! Just a really great composition all-around! 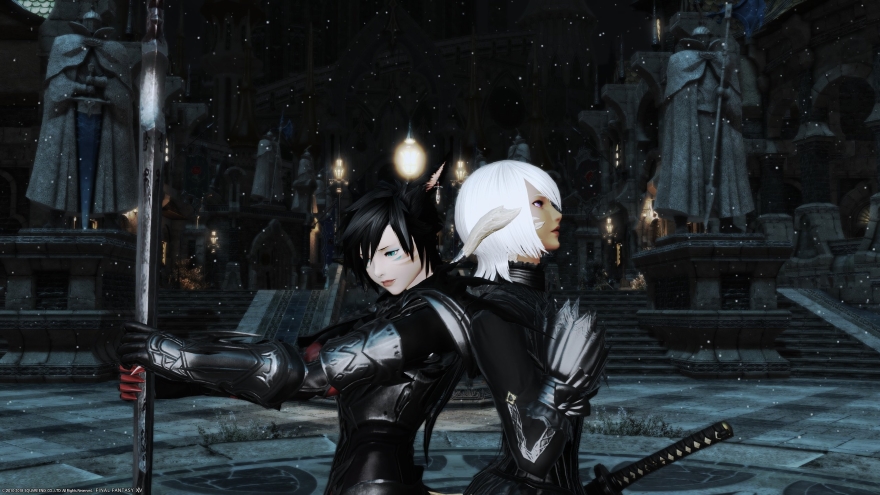 Rafael didn’t have a lot to say about this Star Wars: The Old Republic pic, but it really caught my eye. Mostly because it made me think that, lightsaber or no, that Jedi is about to get eaten. The Force adds a zesty tang to your meals! 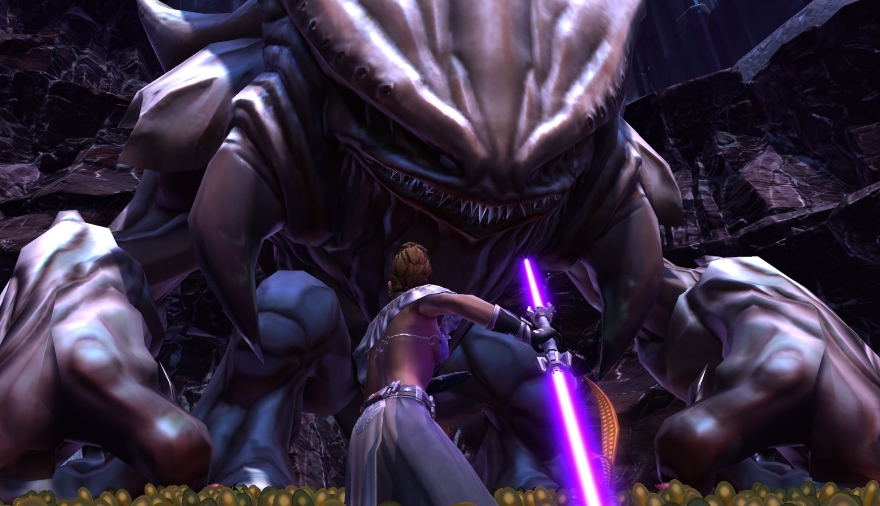 Hikari Kenzaki took us on this journey: “This was so hard to pick one… hours later, looking over tens of thousands of screenshots (that’s not an exaggeration), I got it down to a handful of finalists. It ended up being a rather recent shot of Hikari in Conan Exiles. We’ve traveled from game to game but this game just has some amazing lighting that I can play around with while… playing around.” 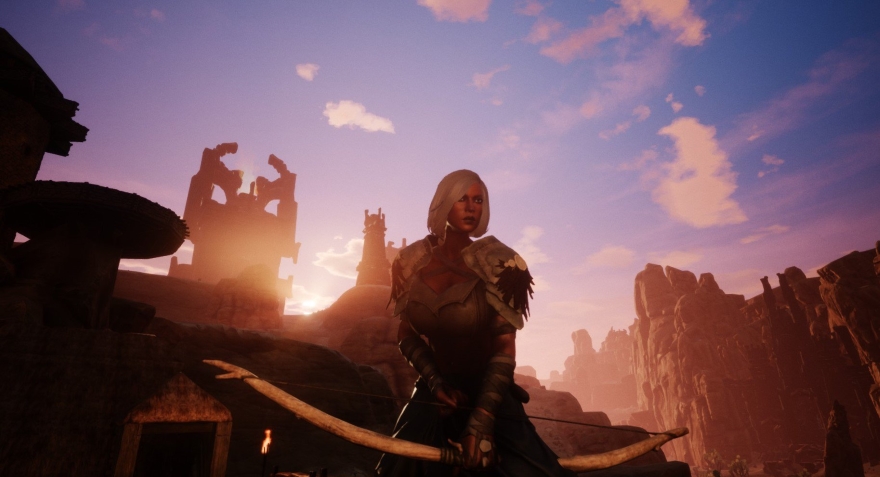 “I just love the desert sunset shots in Black Desert Online,” said Toy Clown. “The landscape is my favorite for backdrops. I’ve taken so many, that it was hard to pick one! But I liked this one a lot.” 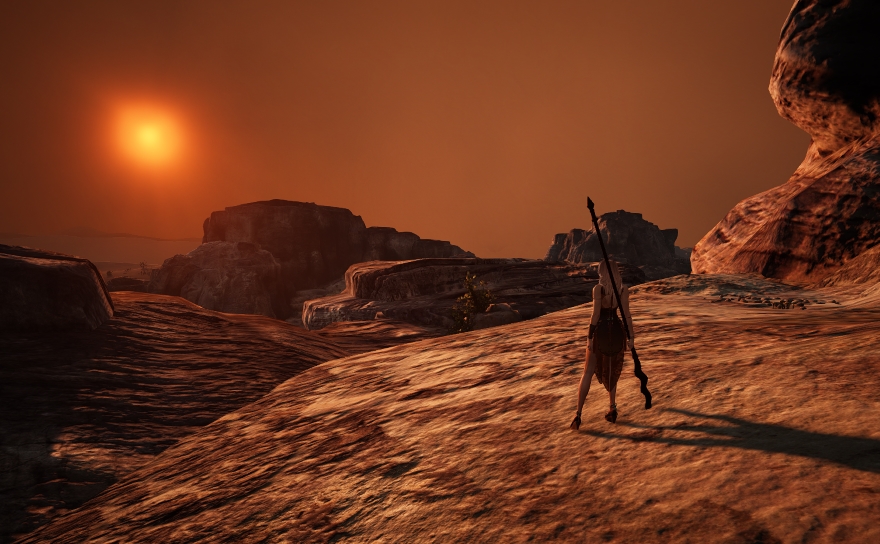 My mind is turning to mounts this week, so let’s mold the screenshot challenge to be a picture of you on your mount doing something amazing. Like riding around or standing still or leaping off of a cliff in an attempt to recreate the ending to Thelma and Louise!

Spaceships are mounts too, right?
So here is a shot from E:D. More precisely from the basement of the galaxy. Was impressed that the game shows that – stars and even background tint on one side only.

Sorry Justin, no shots of any of my characters plunging headlong to their deaths.
However I very recently starting playing BnS so have a nice screengrab of a cutscene in that game.

Please email us using the TIPS form in the top-right hand corner of the site. We’re trying to get this fixed and need to know who it affects.

Hows about being the most amazing bounty hunter in the verse and riding not in the Imperial fleet… BUT… ON the Imperial Fleet (was a noob and didnt turn off UI).

Hmm. Well, I have a few mount picks, but… how about a pic where mistakes were made.

My Jedi Shadow, Yolie, has always been adventurous. She has always been one to try things out well before others. But sometimes she does go a bit overboard. In the case below, she tried to prove her tank mount could go over anything, and I mean anything.

Challenge – Here is a shot from Vanguard. It appears that just got finished with a fight, so I summoned my mount and immediately proceed to fall thru the world. I am attempting to recall before I die to the falling damage ticks.

From the mini-map it looks like I could have been exploring around mountain tops and found a hole. I’m adept at finding places to get stuck and such.

Only a Lalafell would look this happy being carried around by a Death Claw :)

Happy about being carried by a piece of dangerous Garlean Technology? And people wonder why I assert Lalafell are evil! Its even in their name!

… But it works, cause I still need and want that mount too…!

I noticed when I was playing XIV, that hey had a lot of very strange mounts. o.O