Today is a pretty big day in Norrath: EverQuest turns the big 2-0! Impressive. Twenty years is quite an accomplishment. Even more impressive than lasting two decades is doing so without languishing idly in maintenance mode. EQ has continued to receive regular expansions even amid some rough years for Daybreak. And this past year has certainly one of those; for every step forward there seems to be two (or more) steps back. Remember “Who’s Columbus Nova“? Still, EQ keeps pressing ahead, and it now has 20 years under its belt. Few MMORPGs can boast such a claim!

Like the 19th before it, EQ’s 20th year has been full of festivals and progression servers, capping off with its 25th expansion in December. But perhaps nothing will compare to celebrating such a momentous anniversary this March, regardless of any shadows from the year. Here’s a look back at this milestone year and a look ahead. And an invitation to party!

Apparently EQ is not for you unless you’ve already been there, done that — and want to do it again! You might have noticed that getting into EQ as a new player is pretty tough. You can’t even enjoy huge chunks of many holidays and events — such as the current 20th anniversary celebration — unless you are high or max level. That is not likely to change; doing so would be considered detrimental to the game. 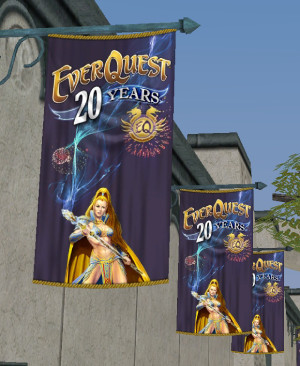 While it is perhaps strange and even sad to hear a studio admit, it makes sense that Executive Producer Holly Longdale would say that EQ’s emphasis is not on acquiring new players but instead reacquiring old ones. EverQuest seems to have hit its stride with progression servers during recent years. Although new players can jump in on progression servers and start over alongside everyone else, these servers bring various nostalgic experiences to players. You can see that progression servers are easily the biggest focus: Out of the past 12 months, progression server-related news accounted for 50% or more of the official announcements for five full months, with that number jumping to six if you take away sales posts. In August alone, five of the six announcements were all about progression server unlocks. (The lone topic was announcing a bonus XP and market sales event for members.) The only times progression was practically a non-topic were the months that focused on the new expansion. And surprise, part of the big 20th anniversary celebration includes — you guessed it — two new progression servers.

Still, hearing that Daybreak is happy with this and really has no interest in or plans to court new players feels awkward. It goes against what the rest of the industry seems to want us to believe. But as Longdale stated, this is working for them to sustain the game, so why would they change it? Trying to chase the newer shinies and trying to cater to what newer players want tends to drive away the long-term loyal fanbase. And those fans have kept the game going for 20 years; they can surely keep it going a while longer. If you rock their boat too much and they bail, chances are you’d have nothing. So catering to the die-hards could indeed be the best plan for EQ’s continued longevity. That means keep expecting variations of progression servers, expansions, and a continued increase in power level.

April might have been one of the hardest months for Daybreak; the whole Columbus Nova fiasco really shattered a lot of trust. Even some usual supporters of Daybreak reached their limit and now stepped away. On top of the infamous “no affiliation with Columbus Nova” line (after years of pushing that very fact), there were multiple layoffs and the chief publishing officer left the company. Remaining staff had to try to reassure the EQ community that the game was fine and that development was moving forward — no easy task when offering no details at all. April also included a bonus XP event for all players that came about as an apology for extended downtime.

February 2019 also had a hiccup when players were not overly fond of the proposed anniversary progression server rules. Hopefully, the reworked rules/changed names will be more to the community’s liking. 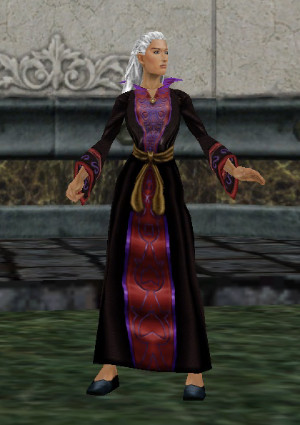 As lean as it might have seemed outside of progression servers, other positive experiences happened throughout the 20th year, including a screenshot contest that awarded a 90-day all access pass to the winner, a free Metamorph Totem: Summer Murkglider gift for members, fall fun events for all players instead of just members (including reduced lockout timer and bonus XP events), and the Hardcore Heritage event.

Hardcore Heritage, which took place from June 6 to July 3, 2018, gave players a reason to revisit popular lower-level lands for great loot. Starting at level 80 and increasing up to level 105+, players could return and experience high-level adventures in Blackburrow, Cazic Thule, The Ruins of Old Guk, the Estate of Unrest, Crushbone, The Permafrost Caverns, The Castle of Mistmoore, Nagafen’s Lair, and Ruins of Sebilis. Giving your high-level players more challenge isn’t a bad thing.

Of course, the expansion The Burning Lands is a big highlight of the year. Launched in December, this expansion — the game’s 25th — sent players back to the Planes for the Trials of Smoke to settle the conflict between the djinn and efreeti, with six expansion zones, new raids, and the new luck stat.

A huge step in the right direction is highlighting the community that has kept EQ a thing for two decades. Daybreak put out a call for player stories in word and video form, and folks can enjoy reading some of those memories on the forums. And in a very happy turn of events, Longdale announced in her January 2019 Producers letter plans for the rebirth of a fan event this summer! More info was to be forthcoming in March, so hopefully we learn more soon. Local players didn’t have wait: Just last week the community was invited to kick off EverQuest’s 20th Anniversary by meeting up at BattleMage Brewing Company to enjoy camaraderie and a special brew, an IRL version of Brell’s Blessed Stout.

Steps in the right direction?

Some news is hard to pinpoint as necessarily positive or negative until we can view the eventual outcome. One of those bits of news was the announcement of development of EverQuest for mobile. Not much more has been said about it than its existence, so who knows how this will turn out.

The lifetime subs offering in December could also swing either positive or negative — we won’t really know which way it settles until we can view it in hindsight. As for the present, it is seen as both: Die-hard fans were pretty happy for it, while others found it more of a desperate move to get fast cash before the studio possibly implodes. Is Daybreak in danger? n January, EverQuesting explored the likelihood of Daybreak surviving 2019, something that’s no longer a forgone conclusion.

And now, it’s here. The 20th anniversary celebration has begun! In-game events have started rolling; here’s a list of what you can enjoy. Just be sure you get all your celebrating in by Friday, May 10th, as that’s when the anniversary content leaves the game. (Although the announcement says 2018, I think they mean 2019!)