Much of TennoCon 2019 is showing off what will come in the future for Warframe, but two announcements were for the here and now. Nightwave Season 2 and Wukong Prime access both went live as the TennoCon Live broadcast wrapped up. And that happened for all platforms! Players on XBox One, Playstation 4, Switch, and the PC all got to jump in to the new content while convention attendees were still in their chairs (except maybe some Switch owners who brought theirs with them!).

END_OF_DOCUMENT_TOKEN_TO_BE_REPLACED
There’s a slew of other content showcased in the art panel that will be coming over time, including two new warframes and a number of skins. We’ll be soon welcoming Grendel and Guass to the lineup! New looks are on the way with Nova, Titania, Excaliber, Harrow, Ash, and Ivara Deluxe skins. Additionally, the Sentient tileset was displayed, and a new, upgraded orbiter is in the works. And there’s also an archwing surprise!

Newer players may not be as familiar with Nightwave other than hearing that voice pop up once in a while on their orbiters. Nightwave is actually a unique seasonal rotating syndicate system presented as a pirate radio station hosted by Nora Night. The daily and weekly challenges offer a variety of rewards as well as lore to players. The first one wrapped up, and now the second series started Saturday night. After all the TennoCon hype for future projects, it’s nice for players to get to jump in and do something new right now!

The story of Series 2: The Emissary revolves around a young child, Arlo, who is mute. Arlo emerged from the Infestation completely unharmed with an ability to heal deep wounds. Playing through earns players a new set of Infested-themed rewards. There will also be new enemy models, such as the Infested ancient that was revealed.

Players will also find some changes to Nighwave with the new series, all based on player feedback. For one, there is now a way to play acts from previous weeks so folks who missed a part can catch up and not miss any of the lore or rewards involved. Grinding for creds has also been reduced: There are fewer weekly and elite acts, but they reward the same standing, and creds are now rewarded earlier in the series. Players aren’t restricted to only doing the missions with friends anymore, either. Some endless mission acts also had their time and wave requirements lowered. And finally, new acts cater to those who love their pets and their k-drives, as some kuva and k-drive missions are included.

There are many warframes to choose from, but not all warframes have the enhanced Prime versions. Fans of Wukong now have theirs. Like all ‘frames, he can be earned in game or bought through the store. Along with the new warframe, the Prime bundle includes the Zhuge Prime crossbow, the Ninkondi Prime secondary nunchucks, the Jindou Prime Syandana, the Corposant Prime Ephemera, the Tang Fur Pattern for Kubrow, the Sanzang Kubrow Armor, and a kubrow starter kit.

Before you can be prime, you first have to be. And Gauss and Grendel are two upcoming warframes that devs introduced. Devs quipped that these guys are buddies, with Gauss being fast and Grendel eating everything in sight. How fast is Gauss? Players who were paying attention during the big Empyrean demo saw her not just speed burst but actually run on water! According to the devs, Guass is actually near completion and will be available soon. Keep an eye out for even more info on both frames. 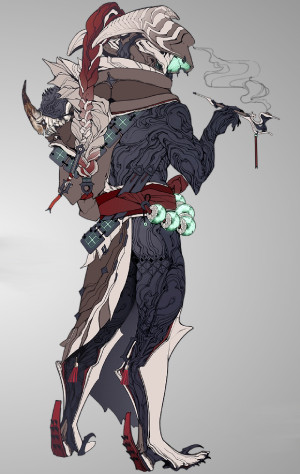 Fashion Frame is a massive aspect of Warframe, and there are many skins being added to the closet of possibilities. Nova, Titania, Excaliber, Harrow, Ash, and Ivara are all getting new Deluxe skins.

It is important to note that some skins are designed by community members. The new Ash Deluxe was created by Arsen Asyrankulo, Nova was by Pete Venters, Excaliber Deluxe was designed by Liger Inuzuku, and Titania Deluxe was made by Nikita Leshakov (her razorflies will be skinned as well). Folks might remember that Titania’s concept was introduced at TennoCon last year, but now they devs had the actual model to show off. Excaliber’s includes cloth animation (which devs in the panel said will make the tech animators cry a little bit!), and devs also told us the pipe will be included as a first ever custom idle animation set. Check out all the new looks in the gallery!

A number of other weapons bundles and skins are incoming, including a Duviri bundle, a railjack bundle, a Grendel bundle, a Sapient bundle, Sentient weapons, and new war bundle.

The art panel discussed the new Sentient tilesets coming, including explaining why development had been taking so long since the first concepts were shown many TennoCons ago. It’s because the gameplay could not be successfully integrated into the environments. There was so much trouble moving it to a 3-D space. Trying it made a visual chaos for players, but the team tried again and again. The team finally solved this by conceptualizing the tileset as a character following the lore. The answer: “The idea that this mothership during the Old War went beyond the void, and kind of got severed and destroyed, and has made its way back and is slowly trying to rebuild itself.” A cathedral theme was also adopted.

Did it work? It appears so. A number of concepts were shared as well as a video of the sets working in game. Quite a few enemies were also shown off (including one looks like a chicken skeleton in flight and a waiter that splits in half to become a teleporter!). You can see many of the revealed concepts in the gallery.

Now let’s talk a moment about orbiters and archwings. The orbiter is getting quite the renovation. At first it will be only the main section, but other rooms will be added. When the ship converts to the new model, what happens to the decorations? Live Operations and Community Producer Rebecca Ford assured the audience that she already tested it and all decorations will be there in the new orbiter, even if they may need to be adjusted a bit for the new set up. As for archwings, Ford revealed modular ones! Custom build my archwing? Yes, please!

Disclosure: In accordance with Massively OP’s ethics policy, we must disclose that Digital Extremes funded our writer’s travel to and accommodation at this event. The studio has neither requested nor been granted any control or influence over our coverage.
Get caught up on all of our coverage of this year’s Tennocon!

It’s to bad this game isn’t all open-world content or I would be all over it. It’s too bad we can’t skip the old claustrophobic walling running early content.

I would have thought that to as a die-hard open-world gal, but I was surprised how much I really enjoyed all those missions (especially when done with friends). They aren’t all narrow corridors either, so you have ones where they are open and even multi level (and I jump or fall to the wrong level haha)

The new orbitor is going to be OMFG!

I never use Wukong (though should probably give him another try after his recent rework) but am very happy about the Zhuge Prime crossbow, my basic Zhuge has 5 Forma on it and is the weapon I always use for Bow-only Sorties.

It’s nice that the Empyrean expansion is giving Archwings some attention, and am so excited for the Sentient tileset and enemies coming with The New War!