With TennoCon 2019 in the rearview mirror, it’s time for folks to buckle down and get back to work developing more awesomeness for Warframe. Oh, I’m not talking about Digital Extremes — although with Empyrean and The Duviri Paradox, the devs certainly have plenty to do! No, I am talking about the player creators who supply skins and even frame concepts to the game.

END_OF_DOCUMENT_TOKEN_TO_BE_REPLACED
Like the (now mostly defunct) Player Studio from the Daybreak games, Warframe has a special system called TennoGen in place that allows for a variety of player-created content to be sold in the game. Because a chunk of the proceeds go to the creators, these items can be bought only through Steam with cash; players can’t use plat bought through DE. It’s even easier to buy now as TennoGen Store just launched on the Steam client, allowing players to buy before even logging in to game.

But the TennoGen items are not the only way content creators contribute to Warframe. Designers have created concepts for warframes as well. These creators often have their own fan followings — including DE staff — and are even requested at times to submit specific items. Here is a deeper look at TennoGen, including the new factions introduced live at the convention!

Unlike the in-house Player Studio, TennoGen is a Steam Workshop program that promotes “content created by Tenno for Tenno.” You can browse through everything submitted or filter by favorite frames, weapons, accessories, etc. Of the 468 entries currently there, 271 have been accepted for the game.

To take part in TennoGen, creators need to download the software. Warframe has its own TennoGen forums to help you get started, including a nice FAQ to help answer your questions — questions like “Is there a Faction style guide?” and “What if I don’t know texturing?” (answers are yes, and practice, respectively).

Even if you aren’t ready to submit creations to DE yet, you can utilize the forums and program to get feed back as well as help determine what pieces are most popular by voting on submissions. Final decisions on what is accepted is by Digital Extremes; selections are chosen for quality and creativity. And when an item makes it into the TennoGen Store, the creator gets 30% of every sale made. Remember, these items can be purchased only through Steam and not with Warframe’s platinum currency.

You don’t have to create to appreciate TennoGen. You just might be a consumer wanting to partake of the creations. You can do that through the in-game market (either by visiting the console on your orbiter or using your menu) or through the newly launched TennoGen Store on Steam. Now you can buy up some cosmetic goodness without having to log in. Currently only TennoGen 15 is available at the store currently, but DE assures more will be appearing over the coming months.

One peek at the TennoGen section of the Market in game shows frame and weapon skins galore, landing craft skins, accessories, and more. There’s much to personalize your experience even more. Fashion Frame is where it’s at! 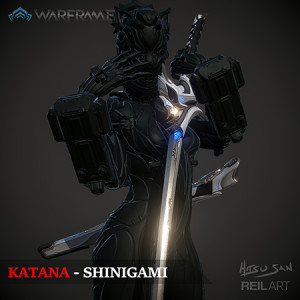 Whether you are a creator or a consumer (but especially if you are both!) heading to TennoCon isn’t a bad idea. Each year there is TennoGen workshop where devs show off stuff, make reveals, and sculpt live. This year, three new factions were revealed to be coming to the style guide soon. Ostron, Solaris, and Sentient will be joining Tenno, Corpus, Grineer, and Infested to make seven factions to design for.

Other new types of creation possibilities are also on the way. There’s the mega Dual-handed Nikana sword expected by the end of July. Chest armor piece cosmetics are also opening up; the full technical requirement write-up is expected by the end of this month as well. Though currently chest armor is the only option, DE will evaluate adding shoulder and leg plates where possible. If all goes well, perhaps full armor sets can come in the future.) And last but definitely not least, if your favorite weapon is a whip as mine is, you’re in luck! Technical details necessary for whip design submissions are also expected by the end of July. (Although fell free to share any with me now so I can dream of new whips for my ‘frames!)

New factions, new weapons: There are so many more outlets for creativity! It makes me wonder what might be coming down the pipeline next. Weapon attachments on kubrow armor? It may not be a laser shark, but why not a laser pup?

Speaking of outlets for creativity, it’s important to note that not all player designs are for TennoGen. In fact, there are player designs that are a part of official skins and even warframes themselves.

In this year’s TennoCon art panel alone a number of designs made by community members were highlighted among the dev-designed items, including multiple deluxe skins. New designs are even sometimes specifically requested by DE staff; even though Ash wasn’t in the line-up to get a new deluxe, devs said they felt Arsen Asyrankulo would make a great one and asked him to do it. The result will be available to players before too long. Other creators highlighted during the panel were Liger Inuzuku, Nikita Leshakov, and Pete Venters. In the case of one skin, devs will even need to create new content for the game as a whole in order to incorporate it: Excaliber’s pipe will be the first custom idle animation set.

While I can’t recall all contributions, one memorable fan design was the concept that led to the new warframe Garuda, which was released last fall. I am still looking forward to playing her!

If you are interested in checking out more fan concepts, from new warframe ideas to new features, check out the Fan Concepts section of the official forums. There’s plenty to peruse there! I’ve seen suggestions for gender-bending current frames to depictions of Norse Gods like Fenrir to dinosaur themes. Lots of interesting ideas, even if they can’t come to the game. Which ideas tickle your fancy? Do you have some of your own? Share them with us below!

At least one person now employed by Digital Extremes (weapon artist Kaz Adams) started off designing TennoGen items, and there are some people out there able to make a living solely off their cut of TennoGen sales!

A thought dawned on me the other day actually in reference to TennoGen. I had noticed over the years of playing Warframe that somehow players were able to create skins and models that were in many cases far superior to those created by the actual team building the game. I am sure many of you have looked over the available skins or helmets for some new frame you just got only to quickly realize that the only DE created skin is the fairly basic floor model and they ‘may’ have a second skin released later. Then you see the collection of eye popping, ingenious, beautiful designs… all for sale by players.

So I actually wondered, wait a minute. What would stop a savvy company from holding onto the most choice designs only to then sell them for real money under the guise of a ‘player’? Does anyone vet the creators or does that fall upon the very company this question is regarding? Now I love DE and they have made quite possibly one of the best games in years. Every single expansion they continue to release epic content and…. incredible, beautiful ‘world models and textures’…

Somehow their genius art team is consistently outclassed by home creators but only when it comes to things that can be bought? That seems unlikely. Now I am kind of on the what ever fence on this because to be honest, if DE just up and sold me the skin for $5 I would buy it anyway but it makes you wonder if a company that is so well known for having such a fair cash shop policy in that “anything you can buy you can earn!”… except things made by… players. O.O Might just.. you know.

That’s kind of an out there conspiracy theory. Mostly because that while a part of the sale goes to the creator, a big chunk of the sale price also goes to Valve. At least on PC, they’d be using their “supa sneaky sockpuppet” to sell it for real cash, but they’d be giving a piece of every sale to Valve for doing… not much. There’s also all the “lost” sales from people who refuse to use the Steam launcher for whatever reason.

You can’t buy TennoGen on PC except through Steam, one way or another. You also can’t buy them with Platinum, so the TennoGen items are pretty much the only class of things you can’t work towards through gameplay.

And one reason some Tennogen artists can do “better” is that they’re not working under deadlines, trying to fit work on a Warframe outfit in while also doing all the other work required to keep their job. Some of the Tennogen creators are dedicated hobbyists, who can (and in a few cases have) spent months working on a single outfit for a single warframe.

Not saying your theory is impossible. But it does seem a bit implausible.

What would stop a savvy company from holding onto the most choice designs only to then sell them for real money under the guise of a ‘player’?

Do you have any idea how incredibly difficult that would be to pull off without anyone finding out, and how much work it would take to do so?

The amount of player outrage and negative publicity it would generate for DE when it was exposed (and it would be exposed, we all know what the internet’s like) far outweighs any extra profit they could make from it, they’d never be dumb enough to take such a risk.

Also, by way of counterexamples have you seen e.g. the Oberon Feyarch skin?

TennoGen is such a joy to engage with and support. I’ve probably spent $50 on TennoGen, as much as a full game! But the results are gorgeous and really enhance my favourite Frames. A few of my favourites are:

Wow, these look really cool. 30% for creator imo is a bit low though.

Yah, but sometimes you also get hired to work at DE, and you can use these in a portfolio.