EVE Online player Ethan Richards is best known by the name of his in-game character Katia Sae, who earlier this year completed an incredible historic voyage nine years in the making. CCP Games confirmed that Katia had visited every single accessible star system in EVE Online (all 7,805 of them!) without losing a single ship. In recognition of the historic journey, CCP unveiled an in-game statue to Katia Sae at EVEsterdam back in March to kick off the EVE World Tour.

END_OF_DOCUMENT_TOKEN_TO_BE_REPLACED
While people had previously visited every system in known space before, Katia was the first to do it unscathed and even visited the game’s over 2,500 hidden star systems accessible only via randomly generated wormholes. This achievement was recently recognised by Guinness World Records, which granted Ethan the record for “First person to explore all reachable systems in EVE Online without a single combat loss.”

I caught up with Ethan at one of the stops on the EVE World Tour to ask him what inspired his journey and how other players can embark on their own exploration adventures. 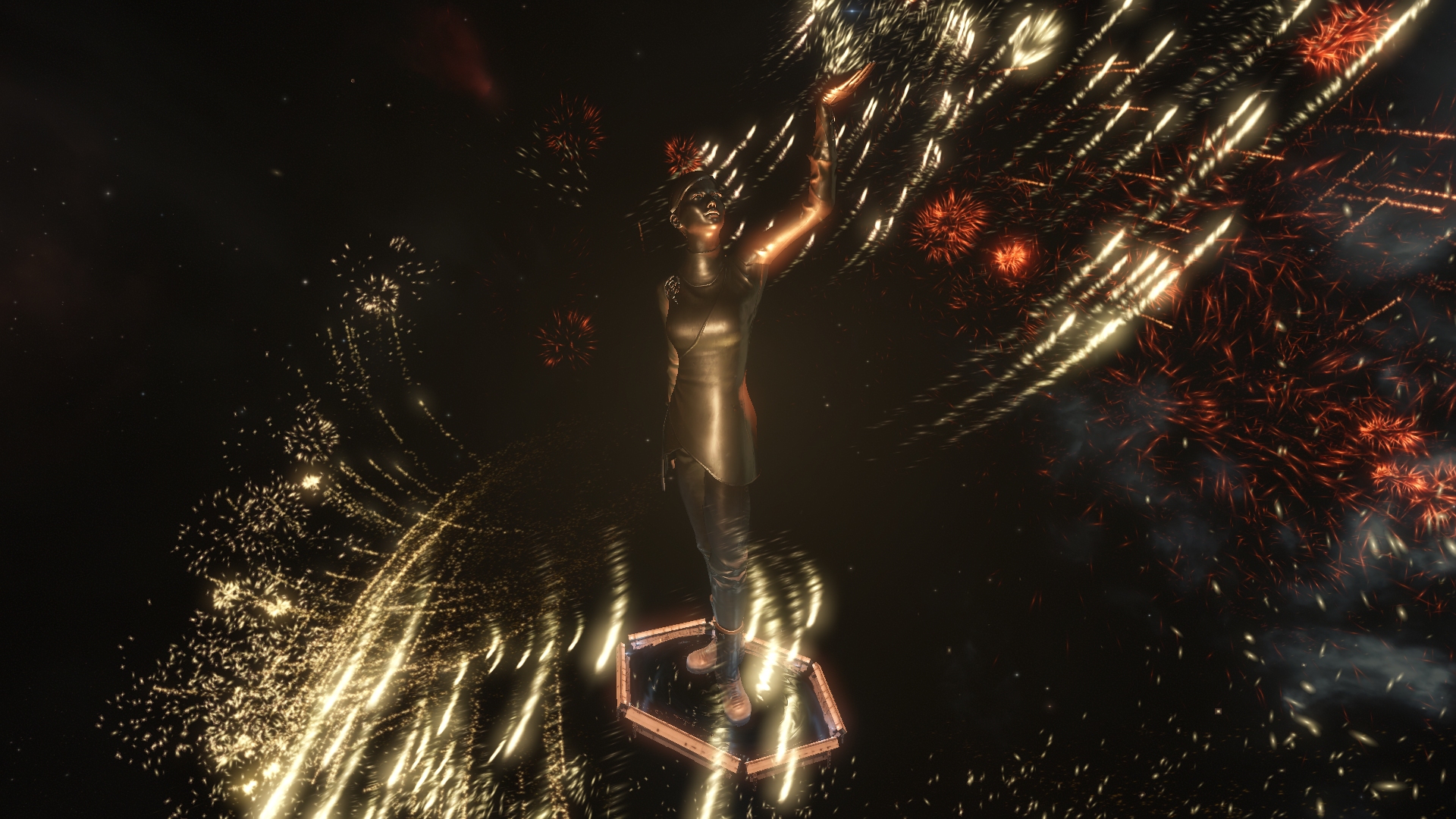 Brendan: As someone who has tried to make the journey around EVE before and failed, I was so impressed that you actually completed this. So the journey took you almost 10 years?

Ethan: I started on December 1st 2009, so it was like a little over nine years. I did have like a two-year break in there when real life reasons took me away from the game. So technically seven years, but yeah long enough!

And you documented your journey on your blog, did you record every star system?

I didn’t document it all down to that level. Unfortunately, when I took my break, the backups a lot of my blog that I had up until that point got very corrupted, so I wasn’t able to recover my early days. Fortunately, my gallery of pictures that I took along the way was saved separately, so I had all of those, thank goodness.

I tried to do different things with my blog. It originally started out with the roleplay concept of the character and kind of seeing the journey through her eyes. I would try to make observations about things along the way, but not everything along the way because then I’d get bogged down in the blog.

It really was more about the journey, and then I’d try to capture some things in the blog. I would also alternate between [Katia’s] eyes and then just me talking out of character, and it even hit some real world exploration stuff and scientific things. My blog really was kind of a mash of different things, but mostly it was about [Katia Sae] and her journey.

Seeing that journey completed has been kind of an inspiration to some players who want to get into exploration. Was there anyone who inspired you to get started on that path?

It wasn’t anyone in particular, what really drew me to it was the re-beautifying efforts of the Dominion expansion when CCP started bringing the planetary graphics up to date and the nebula graphics. I had heard of other players who’d attempted the journey and some who had completed it, but that really wasn’t what had inspired me to do it; it was more about the re-beautifying efforts and I wanted to go see it.

Everybody who’s done this before that I’ve heard of has done it lightning speed: hit the system, get out, and keep going as fast as you can. I wanted to put my own spin on it and take it slow, and blog about it, create a character that kind of fit the journey from a role-play perspective. And so I even took it a step further and said, well, to guarantee that I spend more time than usual in a system, I’m going to take a picture of every planet as I go. So then I was spending about 10 minutes in the system, at least, and it really was on purpose to slow down.

So what were the most difficult star systems to visit or the most memorable?

You know, I don’t remember them by name. If you’re familiar with my blog, on my very last post I’ve got links to everything that I saw and I tried to categorise it, so there is a section I have in there about my favourite stories that I wrote about. It’s not an index of my complete blog, but it is at least an index of some highlights along the way.

Some of the ones that stick out in my mind the most are the times that I was in Brave space. They were lighting cynos and talking in local, and I didn’t know if they were baiting me or not. I had never seen [a cyno] lit before, so I wanted to go see this and take a picture because I’m taking pictures along the way. I was going to be careful; they’re telling me where it’s going to be and I’m cloaked of course. So I go up to the station and wait for [the cyno] to start up, and I’m thinking, “Don’t screw this up. Don’t screw this up.”

I go to take a picture and I accidentally uncloak myself. I screwed it up. So now we’re all just kind of looking at each other, and I’m like, “Crap, I’ve gotta get out of here!” So I get out and they laughed it off, really, it was pretty funny. I really think they were baiting me honestly, but that was one of the most memorable ones.

Many newer players think lowsec and nullsec are so dangerous that they can’t visit them at all without being ganked, and yet you visited every system without losing a ship. So how do you stay safe?

Yeah, that’s a great question. In null space, I took my time and I also spent time researching where I was and whose space I was in. The intel is all out there on ZKillboard, Dotlan, and you can use the in-game map statistics to find out activity in the area that you’re in. So you can figure out where the gate camps are at, you can figure out when people are most likely online, and you can plan your route accordingly.

Mostly I would just seek to evade – like, they’re active this time of day, so I’m going to go through there at this different time of the day. So my encounters were few and far between; it’s just a matter of intelligence gathering and planning. It’s doable.

And what kinds of tools and ships did you use to explore?

I flew several different ships on the way. When I started Katia, she was a brand-new character with no skills, so I skilled her up as I went along. In my early blogs I spent a lot of time explaining why I skilled the way I did, what ships I was getting into, and why was I going for those ships. So I lost all that, of course, and I’m just kicking myself that the darn blog backup was corrupt.

But I definitely had different ships for different purposes. In my early days it was all about speed as I didn’t have skills for cloak yet. I quickly skilled up to the cloaky ships, obviously; that’s the way you want to go. All my fits were all about speed, agility, and cloaking pretty much in that order. The Sisters of EVE ships came out like right at the end of the empire part of my journey, so I didn’t fly the Astero for very long, maybe only a month. I really love the Astero; it’s a great ship especially for those kinds of things.

Did things change much when you went into nullsec?

When I finished highsec and lowsec combined, I put out a call to say, “Here’s what I’m planning to do, here’s what I’ve done already, and now I’m going to go into nullsec.” I put out a call on tweetfleet on Twitter and asked if anybody had any recommended fits, and Ripard Teg of the Jester’s Trek blog came up with a Tengu fit. I used a nullified cloaky Tengu, and that’s the fit that got me through probably the most space that I covered over the whole journey.

I got all the way through null sec not losing that ship at all, and I think I only docked two times that entire length of that journey. One was to join Signal Cartel: I had to go back to a station in order to drop the corp I was in to join Signal. That was one time when I came out of null, but otherwise I was in null that complete two years. That part of the journey I was just in space. It was crazy.

For anyone who loves the idea of pure exploration and social gameplay but they’re not into PvP, is EVE absolutely the game where you can do that?

You hear this about sandbox games that they’re all about what you make of it, and EVE very much is what you make of it. I think one of the things that Fozzie pointed out in the presentation and why they did the monument was that my journey was a solo experience at the beginning, and it was a group experience at the end when my corp helped me out. It was also because I took the initiative to do something that wasn’t obvious to do. It wasn’t a game mechanic. At the time, there was no activity tracker or anything like that.

So for any player who is interested in exploration, I say just go do it. There’s really nothing to stop you. Just do your research and intelligence gathering, and enjoy the ride.

Thanks so much for your time!

Disclosure: In accordance with Massively OP’s ethics policy, we must disclose that CCP paid for our writer’s travel to and accommodation at each stop of the EVE World Tour. CCP has neither requested nor been granted any control or influence over our coverage of the event. I also got a selfie with Ethan \o/

A GM of Mortal Online has passed away, and devs are...