Don’t fall too much in love with the new PvE story missions that are coming with Overwatch 2 because then you’d miss out on something equally innovative for this growing franchise: character progression.

During Friday afternoon’s BlizzCon Overwatch 2 panel, the team opened the door a crack on the progression system to show some of the potential for builds. Blizzard began with several caveats, saying that the game has “a long way to go” and that the progression system shown was just in part and could change a lot between now and release.

“This will give you a sense of the direction we’re going in right now,” Jeff Kaplan said, going on to mention how the progression system and the co-op story missions will go hand-in-hand. 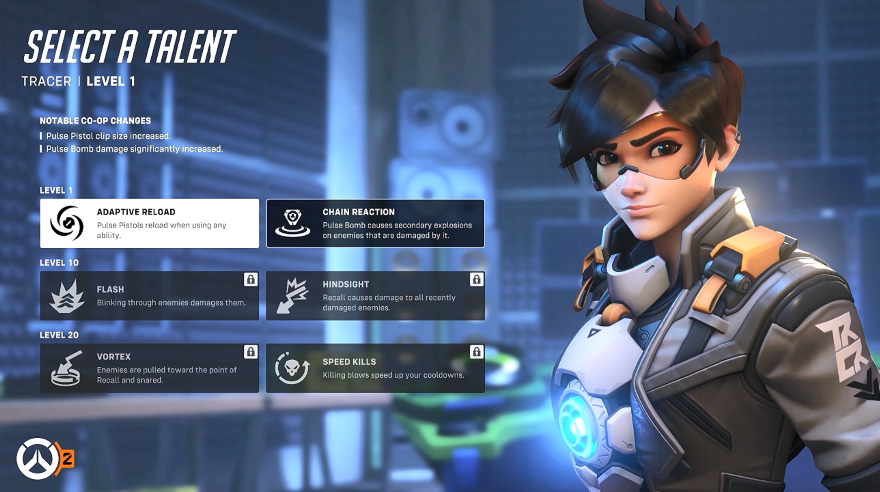 And in fact, Overwatch 2 character progression is only for the PvE side; PvP players will have a level playing field without any of these potentially match-breaking abilities.

So the idea here is familiar for any RPG player: Characters get levels, and as they level up and hit certain milestones, they will be able to pick between talents to form a build. Yes, it’s pretty much the exact system that World of Warcraft has had for several expansions now.

For example, Tracer was shown with a pick between two talents at levels 1, 10, and 20. These choices are, according to the dev team, to allow players to shape the character according to their playstyles, become more versatile, and differentiate their heroes from all of the others they encounter.

The team went on to present a small sampling of the different talents that they’ve created so far, with most modifying existing abilities or adding more functionality. For example, Tracer would be able to automatically reload after using Blink, Hanzo’s sonic arrow would ping-pong between foes, Mei could transform into a giant snowball to barrel over foes, and Genji might augment his slashes with a ranged projectile attack.

Overwatch 2 will be coming to all platforms on which Overwatch currently exists, boast an improved graphics engine, and revamp the HUD. As to its release date, Blizzard isn’t saying. What, did you expect differently?